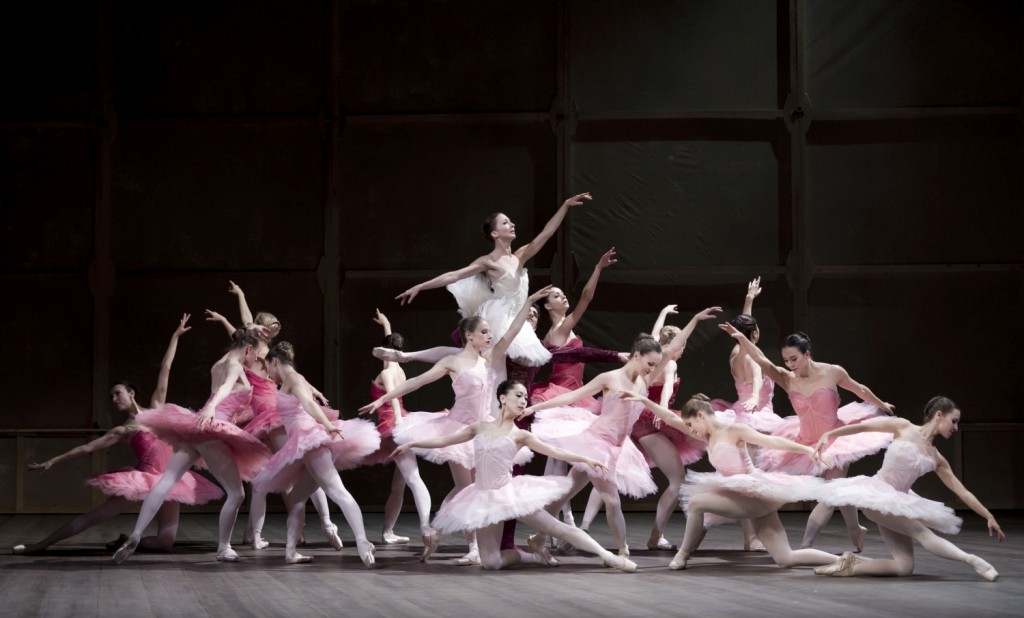 When tackling a new version of “Raymonda”, the last grand ballet Marius Petipa created for the Maryinsky Theatre in 1898, revising the plot is a good idea. Its original libretto by Lidia Pashkova and Petipa, based on a medieval legend, features the noble lady Raymonda who nearly gets abducted by the lovestruck Saracen knight Abderakhman during a festivity but is saved just in time by her reputable fiancé, the knight Jean de Brienne.

The ballet’s three acts offer plenty of opportunities for a splendid demonstration of classical academic dance, yet that doesn’t hide the fact that the story is shallow and built on dated racist and sexist cliches. Several choreographers have revised Petipa’s original, amongst them George Balanchine and Alexandra Danilova in 1946 for the Ballet Russe de Monte Carlo, Konstantin Sergeyev in 1948 for the Kirov Theatre, Rudolf Nureyev first in 1964 for the Royal Ballet’s touring company followed by four other versions, the last for the Paris Opera Ballet, and Yuri Grigorovich in 2003 for the Bolshoi Ballet.

In Stockholm Pontus Lidberg was commissioned with a new production which premiered last autumn. It was his fourth full-evening piece, his first using the classical vocabulary and also a return to his roots. Lidberg studied at the Royal Swedish Ballet School and joined the Royal Swedish Ballet after graduation. Subsequently he danced with several other companies before starting to choreograph in 2000.
Together with set and costume designer Patrick Kinmonth, Lidberg aimed at a streamlined, shortened version. His new libretto also required cuts and rearrangements of Alexander Glasunov’s original score. The outcome is more believable, yet the story is still lightweight, full of stereotypes and has not much in common with the original. Instead of a love affair being 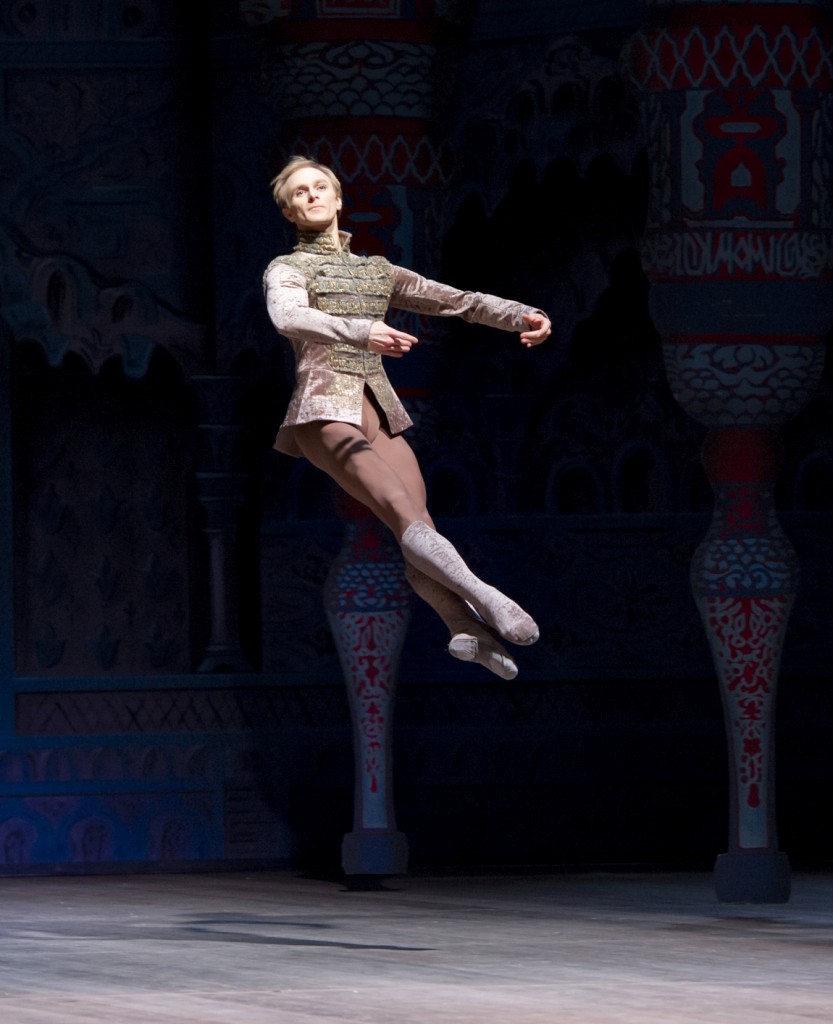 disturbed by an unwelcome second suitor, Lidberg invented a piece within the piece, a ménage à trois unfolding in a ballet company which is preparing to perform “Raymonda”. The principal ballerina cast as Raymonda is torn between two men, her real life and stage partner who is scheduled to dance in the role of Jean de Brienne and a soloist, cast as Abderakhman. Finally it is the woman who has to make the choice.

In 1898, the same year “Raymonda” premiered at the Maryinsky Theatre, the Royal Swedish Opera House was inaugurated. Connecting both events in the new production occurred to Lidberg. When the curtain goes up we are carried back to that year. Watched over by the stern ballet mistress – danced by Joakim Stephenson en travesti – the Royal Swedish Ballet is rehearsing “Raymonda”. Yet the principal dancers chosen for the leading roles of Raymonda and Jean de Brienne (Sarah-Jane Brodbeck and Dawid Kupinski) don’t get along with each other as dancers. Being in private a couple, their relationship’s tensions also affect their dance partnership. Urged on by the ballet mistress, the soloist (Calum Lowden), who is cast as Abderakhman, begins to rival the principal male in partnering the ballerina. He fares better, causing the other man to stalk off from the rehearsal, sulking and angrily slamming the door. A tender affection begins to blossom between the principal ballerina and the soloist, prompting some corps members to tease him.

Parts of the first act include a short stage rehearsal for a group of children (students of the Royal Swedish Ballet School), a dress rehearsal of a pas de deux danced by Raymonda and Abderakhman framed by a female corps, a scene in the ballerina’s dressing room and, finally, set changes overseen by stage hands. During the first half we watch from a backstage perspective, seeing the back sides of the sets, while the backdrop depicts an imaginary auditorium opposite. In the second act the perspective changes. Now we become the real audience for which the ballet excerpt “Raymonda” is performed. Here Lidberg kept the link to the original presenting divertissements and a Grand Pas de Deux echoing Petipa’s choreography but with reduced technical intricacies. Stripped away from the story that lies behind it; this excerpt of “Raymonda” becomes merely a succession of dance sequences, albeit entertaining ones.
After the performance within the performance has ended with a curtain call accompanied by due applause the perspective again switches to the backstage. All dancers have already left the stage except the three main characters. Now the principal ballerina must decide which of the two men is more dear to her. As a vehicle for her decision-making Lidberg chose Petipa’s famous third act solo with the hand clapping. The original’s centerpiece now depicts an off-stage scene. He also reversed gender roles. While in Petipa’s version Jean de Brienne and Abderakhman fight a manly duel, here the principal and the soloist sneak away to either side of the stage as if fearing the lady’s verdict. One hides behind a wall projection, the other anxiously stands around between the piano and the wings. Alas, before we find out who will be the ballerina’s favorite the curtain comes down.

Lidberg’s attempt to contrast the stage life of an artist with his or her everyday life isn’t fully convincing. His ballerina sits in her dressing room as if posing for a photo, all elegant bearing, feet nicely pointed. It is hardly plausible after the curtain went down that she then sorts out her private relationships through a commanding backstage solo. In the program notes Lidberg also mentions he would address what getting older means for dancers; however I couldn’t detect that topic being touched on in the piece. 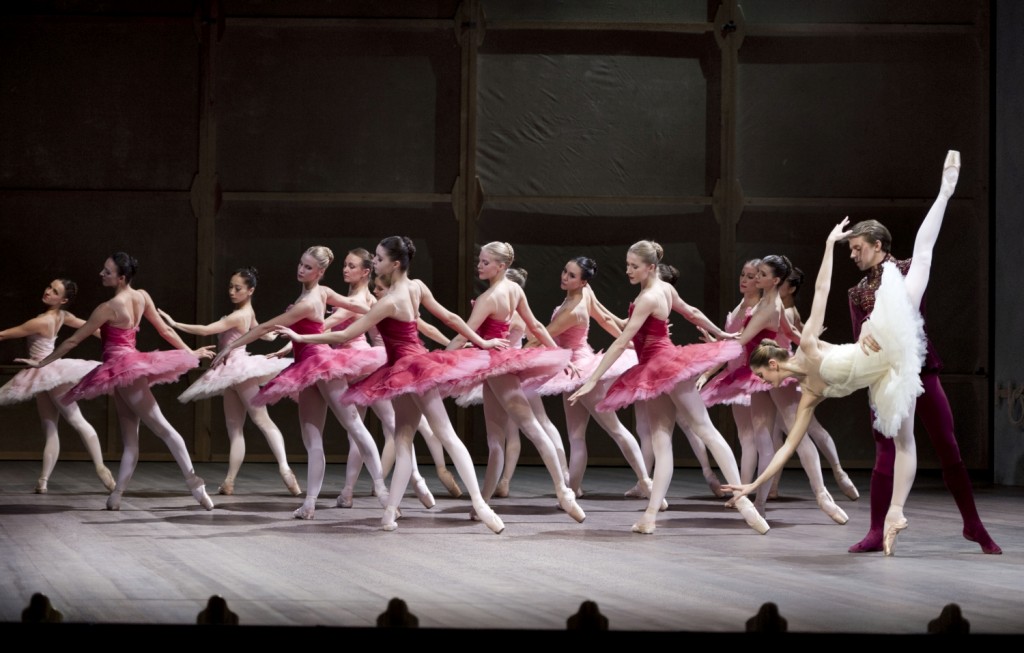 Kinmonth created beautiful costumes for the “Raymonda” interlude, drawing inspiration from Léon Bakst’s colorful designs for the Ballets Russes. Set elements are reduced to oriental lamps and colored backdrops. The rehearsal scenes convey the atmosphere of Edgar Degas’s ballet paintings, without duplicating them. Kinmonth didn’t intend to be historically correct, but meant to bring a fantasy about the Fin de siècle-style to life. Costumes are mostly in light earth colors; almost all girls wear softly swinging skirts. Though not everything runs smoothly during the rehearsal, ballet in general looks as if it is a lovely, romantic world.
In particular, this romantic patina prevents Lidberg’s piece from becoming a soap opera. Doesn’t everyone like sentimental stories of the good, old times?

The first act’s rehearsal scene offered many dancers the opportunity to show themselves off in short solos, casually presented as an attempt to obtain the ballet mistress’s appreciation or to follow her corrections. The company is comprised of dancers of different body types which became more apparent in the performance interlude. AdiLiJiang Abudureheman, Ignacio Lopez, Frei Ruhl and Dmitry Zagrebin proved to be reliable jumpers in their Pas de Quatre, though their different statures made their landings slightly asynchronous. Emily Slawsky sparkled in a refreshing solo, the Hungarian folk dance was served up with zest and it was a pleasure to see the children dance.

Brodbeck radiated warm-heartedness. Hence why the chemistry between her and her partner didn’t work wasn’t quite clear. Yet she lacked technical assurance. She didn’t grow into a poised sovereign in the performance; instead her Raymonda looked tensed in the upper chest, what impeded her to carry her head majestically. Brodbeck was at her best in her last solo, doing her final hand clap with determination.

Kupinski, though ousted during the rehearsal, was a reliable partner as Jean de Brienne in the performance. Lowden, who had outstripped him possibly due to his being a pretty boy with an adoring smile, gave a flawless performance, but his Abderakhman was definitely not a Saracen bursting out full of sheer virility.

For the performance I saw, the opera had made a special offer to attract new audiences. That might explain why some people sitting next to me seemed unfamiliar with how to behave in an opera house. It is a problem every company faces but it goes without saying that there is a pressing demand for action to raise a new generation of audiences. Maybe that is the reason why two large video screens advertising the repertory were installed at the house’s beautiful front facade. Yet the Royal Opera is a dignified institution looking back on a long history and always striving for artistic quality. Is there any need for garishly luminous advertising?