For his twentieth anniversary as artistic director of Stuttgart Ballet, Reid Anderson picked works by his favorite choreographers. In October an evening with pieces by Jiří Kylián, Hans van Manen and John Cranko premiered. Now, in the second new program, the company proves its versatility by yet again indulging in different styles. The triple bill combines ballets by William Forsythe, Marco Goecke and Uwe Scholz (1958 – 2004). All were or, in the case of Marco Goecke, are resident choreographers of the company. And they were all fledgelings of Stuttgart’s Noverre Society, whose Noverre evenings serve as a springboard for young choreographic talents.

Both, Forsythe and the nine years younger Scholz, came to Stuttgart in 1973. Forsythe joined the company; Scholz enrolled at the Cranko School. Both created their first pieces in Stuttgart. Forsythe’s “Urlicht”, shown at a Noverre evening in 1976, prompted Marcia Haydée, then head of the company, to appoint him resident choreographer. Scholz signed his contract as choreographer in 1980, also under Haydée’s directorship. He later became artistic director of Zurich Ballet and subsequently chief choreographer of the ballet company in Leipzig.

Goecke had his choreographic debut at a Noverre evening in 2001. Since 2005 he has been resident choreographer of Stuttgart Ballet. In 2015 the German magazine “tanz” chose him as “Choreographer of the Year”.

Forsythe’s “The Second Detail”opened the program. Created 1991 for the National Ballet of Canada during Anderson’s tenure there, it is new in Stuttgart Ballet’s repertory.
The piece’s first sounds, composed by Thom Willems, reminded me of a craftsman tightening nuts. But the stage had no cluttered workshop ambience, instead it was a simple confined space within walls of white and gray. Yumiko Takeshima costumed the group of thirteen dancers uniformly in light gray tricots and leotards. A sign with the word “The” stood in the middle of the front stage. 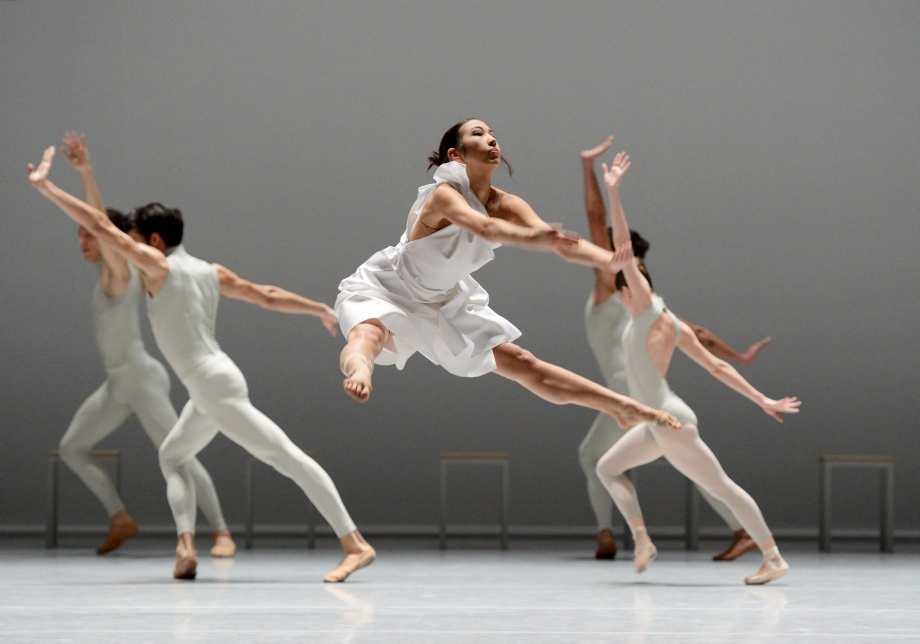 Quickly, Willems’s hammering beats and screeching electronic noise pushed the dancers into action. They were brilliantly responsive to Forsythe’s demands: Legs were kicked high, arms swept; suddenly a hip was skewed off-center, breaking the axis, or a dancer stood knock-kneed. Here and there Forsythe tossed ironical digs at the classical vocabulary. Shapes were overall angular, jumps and spins often executed with lightening speed. Brusque changes of movement quality occurred, as, for example, sharp angular moves became smooth. At other moments, a dancer, just en pointe, stopped and in a markedly casual manner walked away like a mannequin on the catwalk. Yet the classical background still shines through, but its vocabulary is shattered, deprived of its beauty. While some of the dancers took seats on chairs lined along the backside of the stage, others alternated in solos and various group dances, mostly performed synchronously. At one point a barefooted ballerina (Agnes Su) in a white dress entered. Was she comparable to the Chosen One in “Sacre”? Or the leading dancer determined to fire up the others?

At the end Su fell down and a man pushed over the sign with “The”. Where was the “Second Detail”, the meaningful little something behind? Admittedly there were many details, much action, but nothing caught the eye, nothing was fascinating. Reportedly “The Second Detail” was groundbreaking fifteen years ago. Now its tiresomely mechanical and repetitious. Hip action lacking substance. 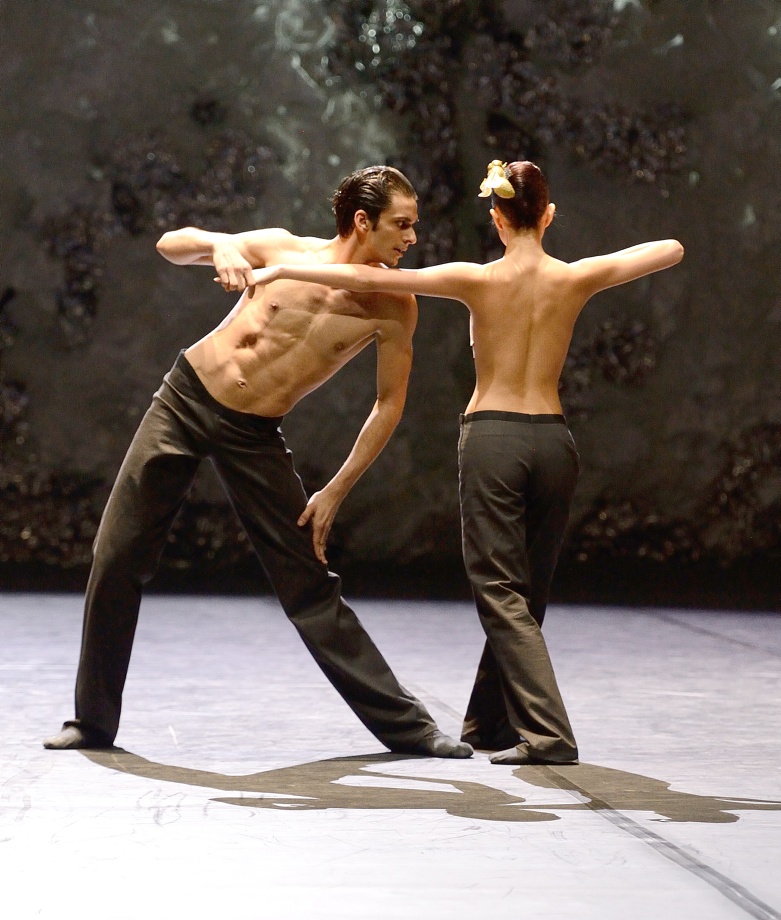 Signature features of Marco Goecke’s style are shivering, trembling muscle men with fluttering arms and hands. His aesthetic is distinctive. Usually the stage is gloomy, sometimes foggy, though this time no smoke machine was running. The men – Goecke describes himself as a man’s choreographer – wear dark pants. Upper bodies are bare allowing muscles to be seen. Intelligent lighting intensifies the focus on this muscular landscape. Legs are less important for Goecke. Often the dancers scurry over the stage, their small steps and slightly hunched shoulders reminiscent of a group of scurrying rats. Sometimes these small animals act as the only prop in an otherwise minimalist empty stage. Muscles are tensed to the limit, arms pump up and down with absurd speed, but some soft moves are mixed in. The dancers sweat heavily, out of the sheer effort to control each inch of their quick movements.

“Lucid Dreams”, Goecke’s new work for Stuttgart Ballet, which he boldly set to the adagio of Gustav Mahler’s “Tenth Symphony”, fits exactly into this scheme. He invented some jumps – a manèges in Roman Novitzky’s solo for example – and, in addition to ten men, included one female dancer. Again Agnes Su took over the special role. Yet her pas de deux with Constantine Allen was less impressive than the rest of the work. Up to now male-female duos aren’t Goecke’s strength. The only animal this time was an insect placed in Su’s hairdo.

Solos dominated, interspersed with pas de deux and group dances. In the second half of the piece the velvety darkness of the stage’s backside was ripped apart revealing a black and white backdrop with floral design. Or was it an abstract forest? When the dancers darted through it to enter or go off stage its plastic rustled. This sound added to Mahler’s score as did intense breathing, hissing, and some muttering. But while Mahler’s music ascended into an transcendent realm, Goecke’s dancers stayed back, convulsed, anguished and in panic. 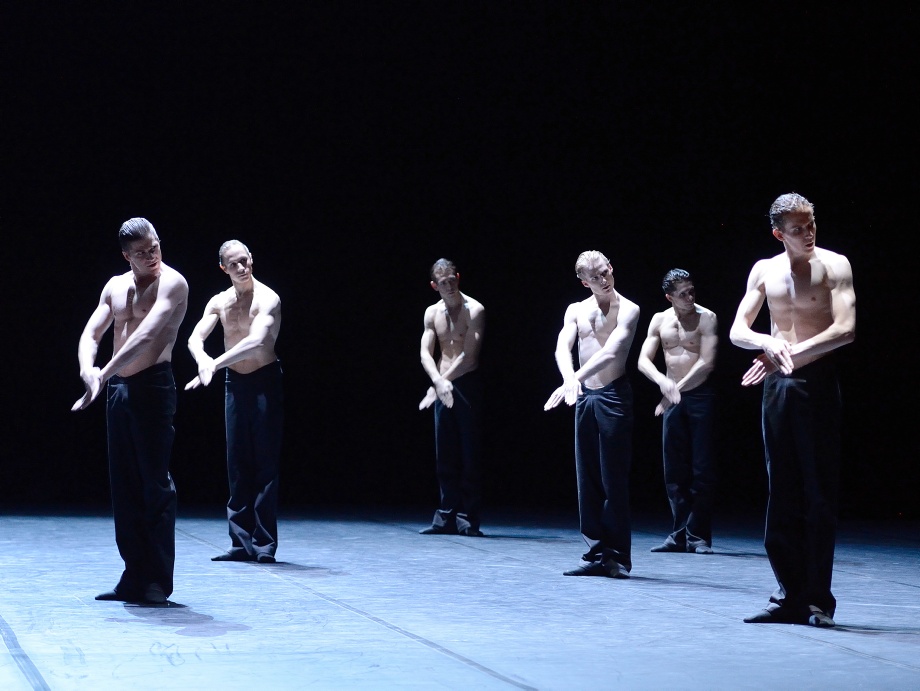 In an interview before the premiere printed in the Stuttgarter Zeitung, Goecke stated that in “Lucid Dreams” he aimed to make his language more aggressive, more perverted. As Goecke remarked, perversion helps him to maintain artistic freedom. But I’m doubtful if perversion will further the art of dance in the long term. After more than a decade, the vigor of Goecke’s approach seemed weakened.

Some of Stuttgart’s ballet aficionados expected that Uwe Scholz’s “Seventh Symphony” to Beethoven’s symphony of the same title had gathered dust over the years. The piece was created in 1991, the same year “The Second Detail” originated. But unlike Forsythe, whose style conquered international stages, Scholz’s works are rarely – too rarely – seen in Germany or abroad.
When the curtain went up the concerns at first seemed justified. The large color fields on the left and the right side of the center entrance, striped in red, green, yellow, black and white, must have been modern years ago. They are designed after a picture by Morris Louis, a Washington artist, active in the 1950s and 1960s. Also the opening scene, in which the dancers stood with their backs towards the audience waiting for the musical bar on which a single ballerinas was lifted by her partner, promised little would happen that was surprising. But what the cast, led by Alicia Amatriain and Jason Reilly, delivered during the following four movements was delightful. Their pizzazz made the piece bubble with liveliness. 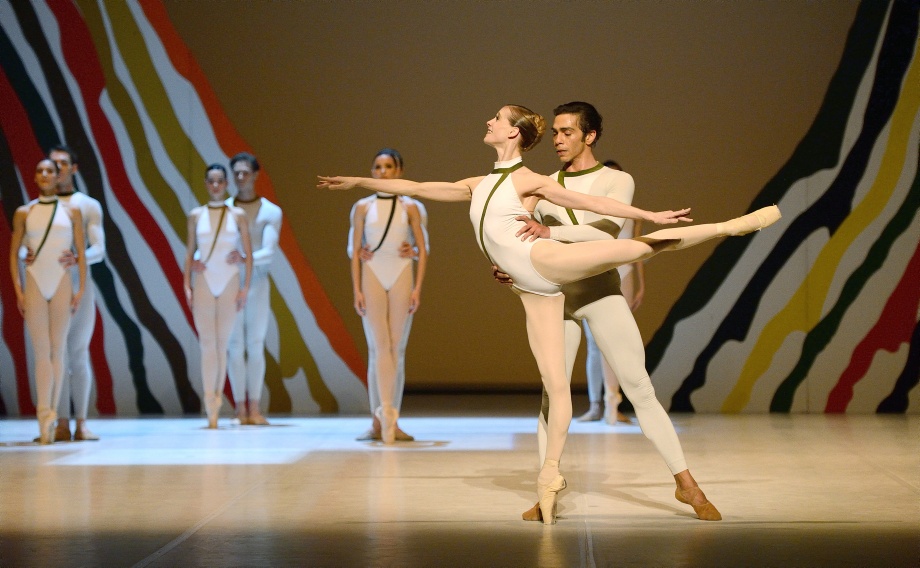 Scholz included classical pas de deux and made the corps split up in fluent geometries, but he also intensified the visual impact a group of dancers has when plainly walking to the left and to the right side. Twice the dancers gathered around a large spot of light in the middle of the stage as though waiting for an apotheosis-like sensation to ascend but nothing happened. The repetitions in Beethoven’s music were echoed in choreographic ones, giving the eyes time to savor details of the sometimes speedy choreography. Amatriain danced with easy authority. Reilly, a secure partner, threw her effortlessly into the air. Surrounded by a group of ballerinas, he was at one point the cock of the walk. The entire cast was strong, above all Daniel Camargo, whose natural elegance and stage presence drew one’s attention.

“Seventh Symphony” earned warm applause as did Kevin Rhodes, the evening’s guest conductor. Having adopted a spirited tempo in the orchestra pit, he was all smiles at the curtain calls, directing the praise thoroughly to the State Orchestra Stuttgart’s musicians.

What distinguishes Stuttgart Ballet is their ability to adopt different styles and to constantly deliver top-quality. That is perfectly testified by the new program. 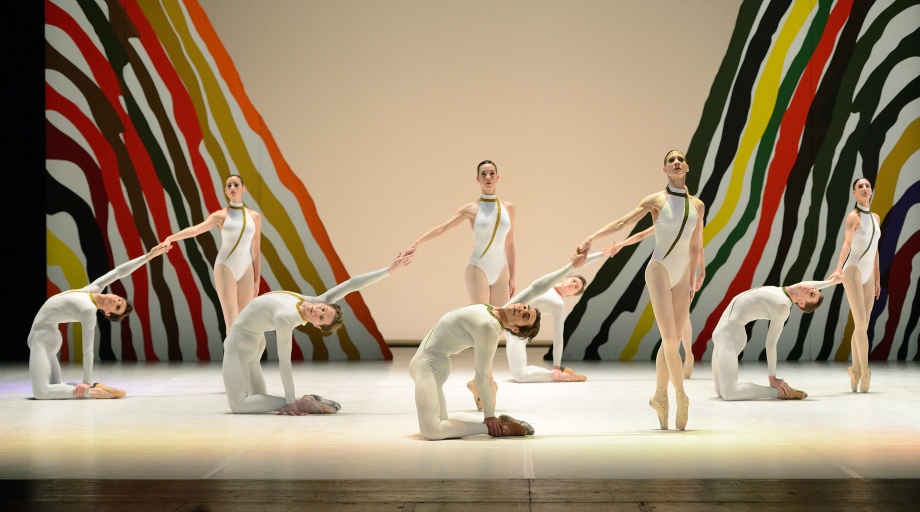