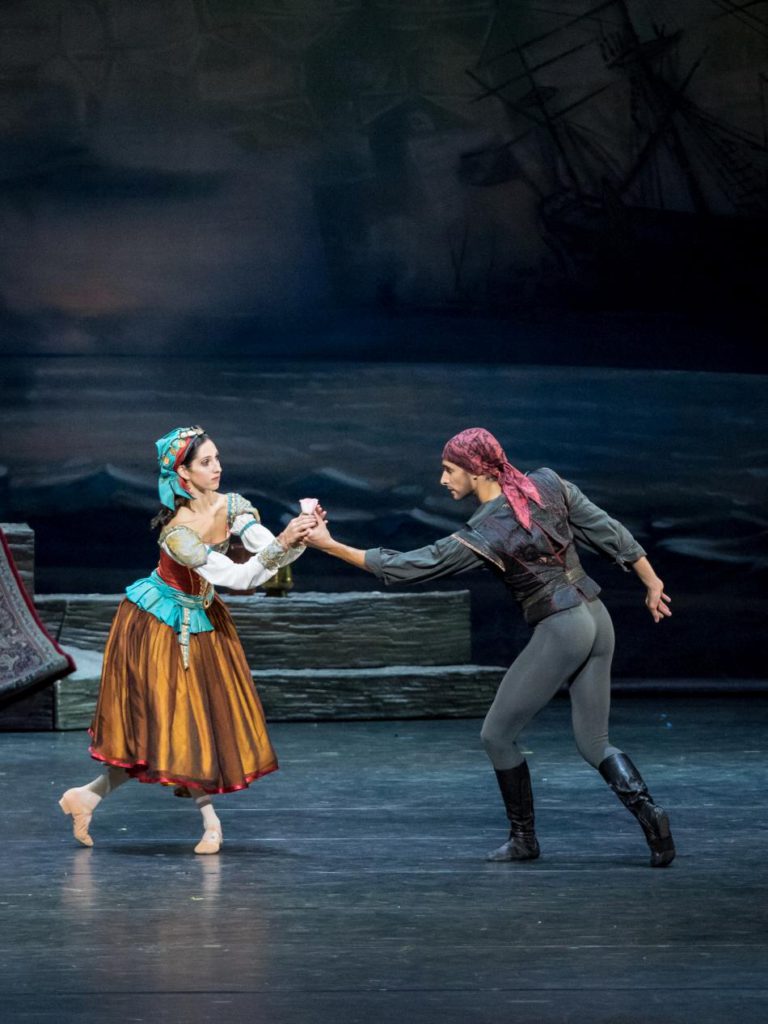 According to the program book, around 70% of the choreography is Legris’s, the rest is based on Marius Petipa’s tradition. I missed the “Corsaire”, which Doug Fullington reconstructed from the Stepanov-notation of Petipa’s 1899 version for the Bavarian State Ballet in 2007, so I cannot compare the Viennese choreography with what is thought to come closest to the original. Lord Byron’s 1814 poem “The Corsair” is the initial source of inspiration for opera and ballet adaptions alike. But already in the first “Corsaire” ballet, Joseph Mazilier’s 1856 version for the Paris Opera Ballet, little of the original was left. Subsequent choreographies weren’t more faithful to the text source either. Apart from a few changes in the libretto Legris’s three-act piece has the ingredients familiar from other versions: a great portion of classical variations, character dance, heroism, romance and a hefty dose of kitsch. 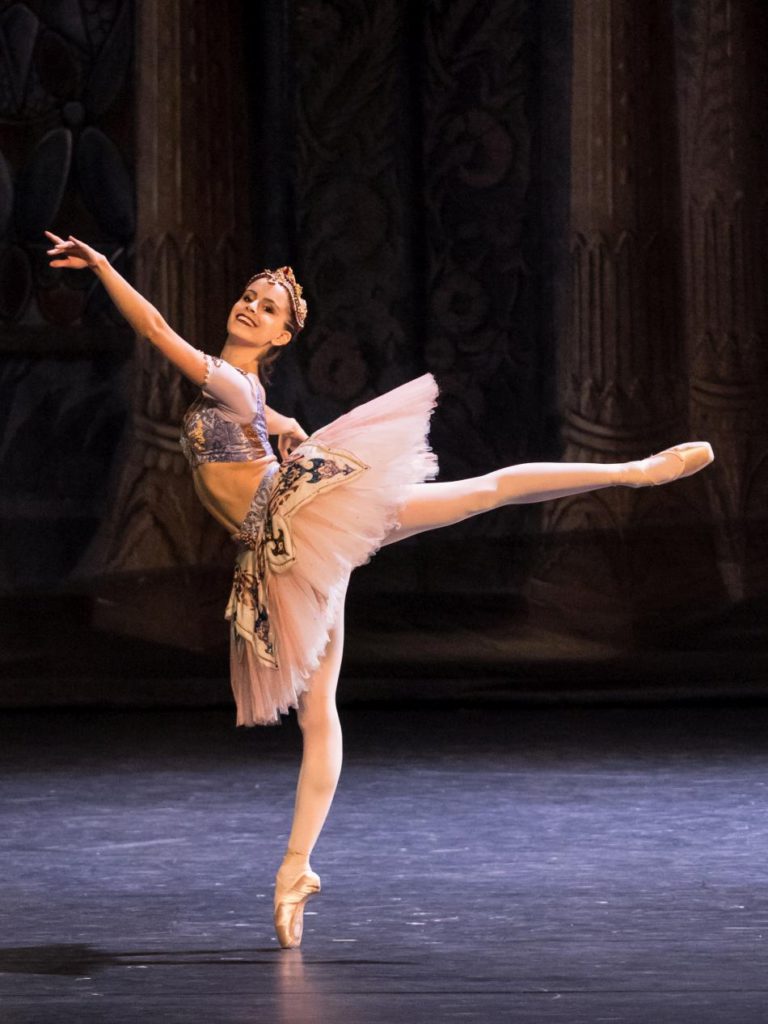 Two and a half hours long, with two breaks included, Legris’s version is refreshingly short. Other productions test one’s patience for three hours and more. Legris’s tweaks to the libretto concern Ali, the slave of the chief corsair Conrad. Ali’s role is scrapped. Quarrels and intrigues between the male heroes and wannabe-heroes now concentrate on Conrad (Robert Gabdullin), Birbanto (Richard Szabó), one of his subordinate pirates, and Lankedem (Mihail Sosnovschi), the owner of the bazar and an efficient women dealer.

We see Conrad and his companions sailing back to their home shore after a successful foray. On the same shore Lankedem’s accomplices capture a group of young women from the neighboring village, female supplies for his slave trade. Among others, they get hold of Medora (Liudmila Konovalova) and Gulnare (Nina Tonoli). What will happen, will happen. The moment Lankedem presents Medora to Conrad both fall fall in love with each other. But selling both the young woman and Gulnare to a wealthier costumer, Said Pasha (Jaimy van Overeem), is a better transaction. Vienna’s Said Pasha is no caricatured paunch of a ruler but a respectable, goateed women admirer. Of course Conrad, a real man, doesn’t put up with coming off second-best. With the help of his pirate buddies he rescues Medora and some other enslaved women and escapes to the pirates’ cavern where the return is 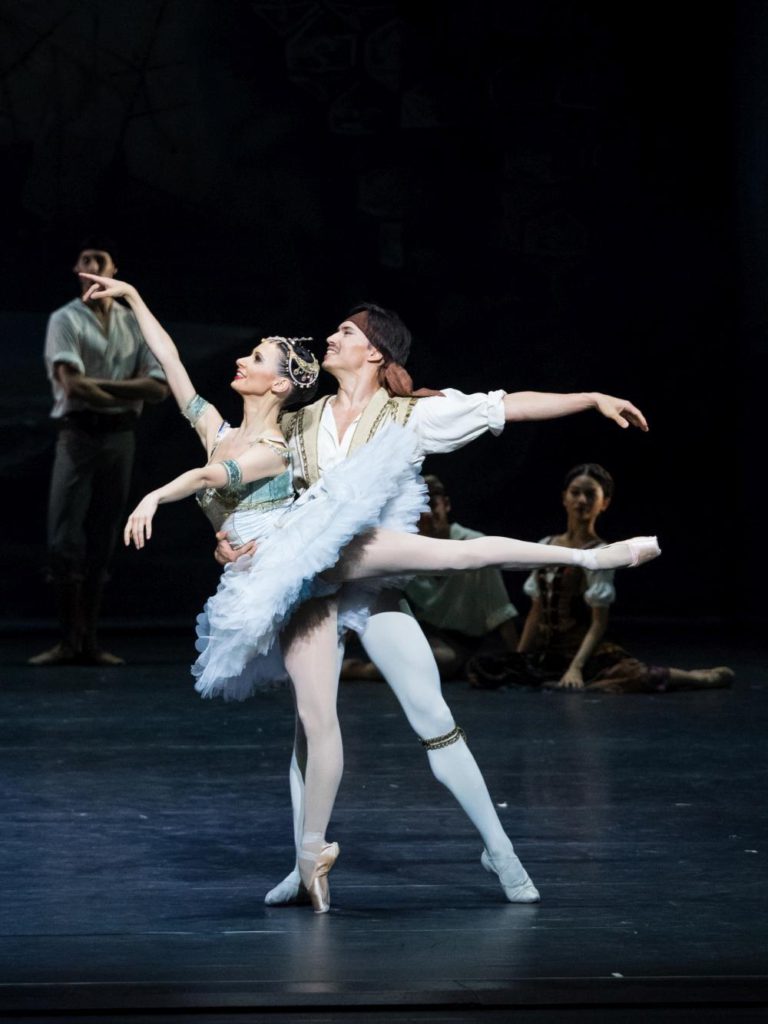 celebrated with happy dancing. But during the feast Birbanto gets humiliated by Conrad and seeks revenge. His intrigue puts Conrad out of action with the help of a poisoned flower and passes Medora on to Lankedem again. She is brought back into Said Pasha’s harem straightaway.

Unlike in other versions, Legris allows Medora to identify Birbanto as the traitor before being kidnapped. Conrad, just recovered, assembles his men, Birbanto among them, to free his beloved. Disguised as poor pilgrims the corsairs gain entrance into the harem, brandish their scimitars and free Medora. She reveals Birbanto as the intriguer. Conrad and Birbanto fight and for a moment I fear for the Pasha’s life 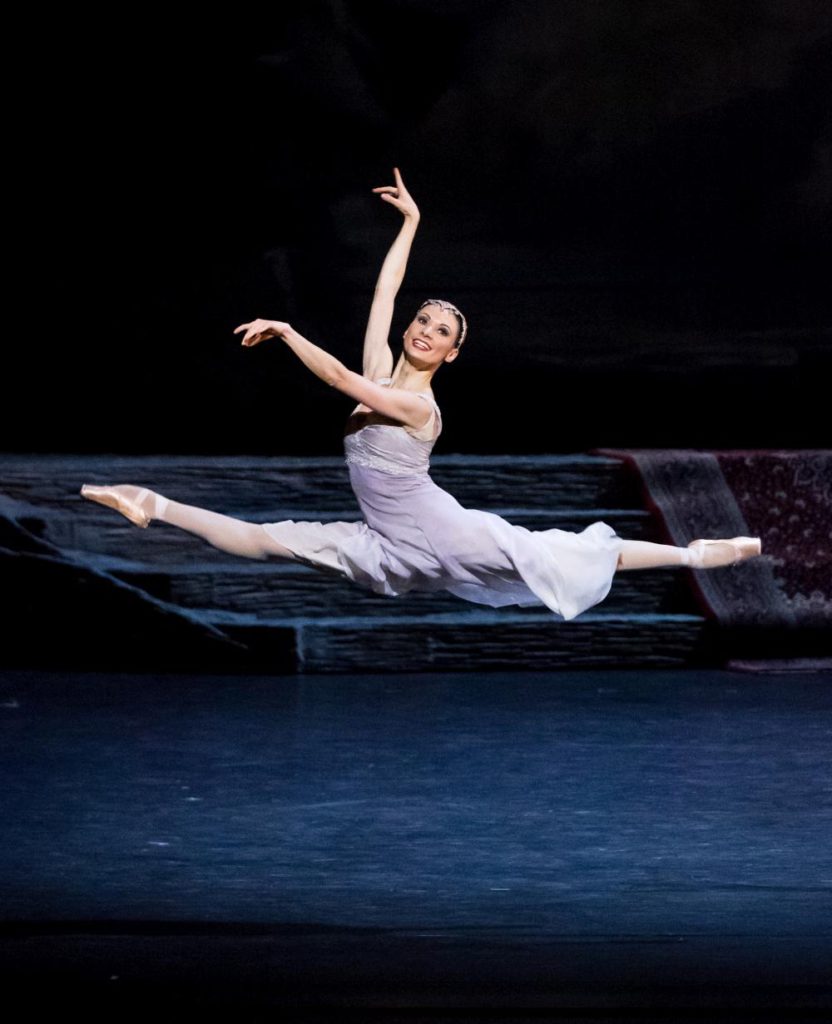 because the three pirates, keeping him in check watch the fierce scuffle rather than the sharp blades they hold at the Pasha’s throat. But except for Birbanto, being stabbed, no further victims occur. At least at this point. Tragedy mars the happy ending though. The ship with the fleeing corsairs and Medora is shipwrecked in a storm. What happened to the crew we will never know. After everything, Conrad and Medora are washed ashore. They reunite happily. Gulnare, having become the Pasha’s favorite harem lady, presumably does herself well too.

Set design and costumes are by Milanese Luisa Spinatelli who turned to lively, warm hues, the right amount of glitter and proper fabrics. She has sense for detail and taste. The sailing ship with the gesticulating pirates suddenly turned up on the ocean of the oil painting-like backdrop as if an old painting had come alive. The final wreck in the storm was less impressive. 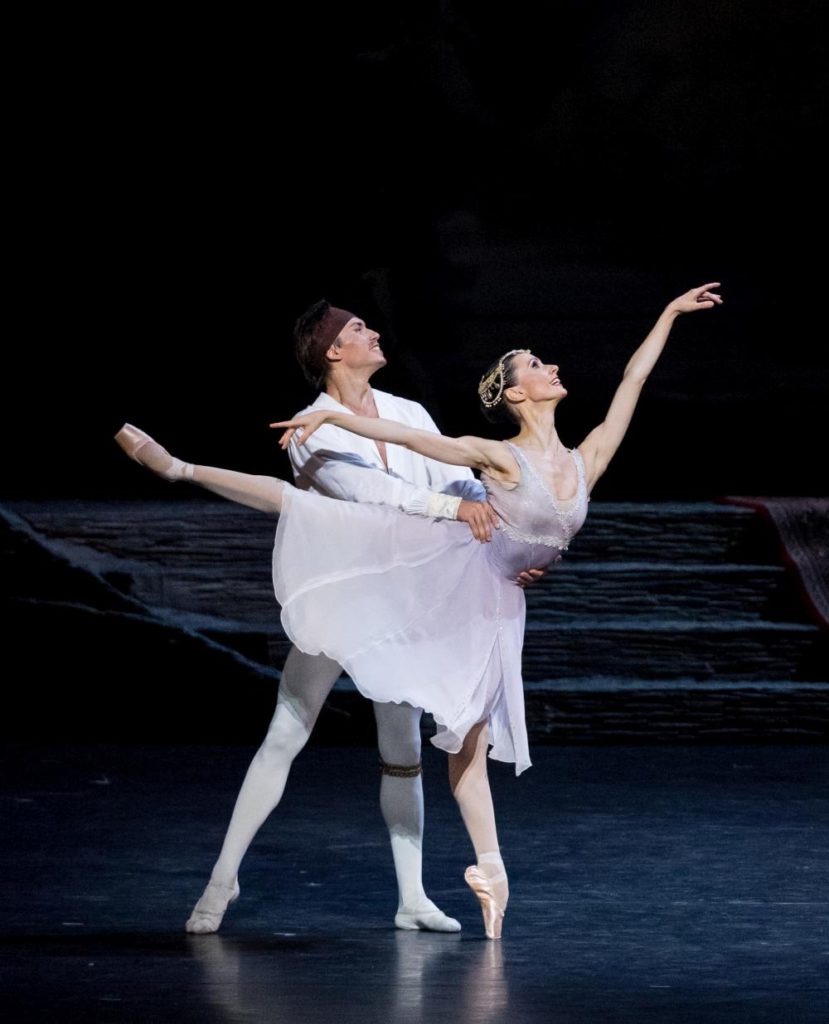 Another plus: the music, which, apart from a few borrowings from Cesare Pugni and Riccardo Drigo, amongst others, is mainly by Adolphe Adam. Igor Zapravdin arranged the score drawing on Adam’s original “Corsaire” music and amplified it with “L’Écumeur de mer”, an earlier ballet composition by Adam. “L’Écumeur de mer”, for Zapravdin more substantial than the “Corsaire” music, was used for the slave dance in Act I and the dances of the Odalisques in Act III. Tempestuous, foreboding, buoyant, melting, pathetically soaring – such was the rendition Valery Ovsianikov and the Orchestra of the Vienna State Opera gave of the score. Especially the violin solo accompanying the romantic pas de deux of Medora and Conrad in the cavern was gorgeous. 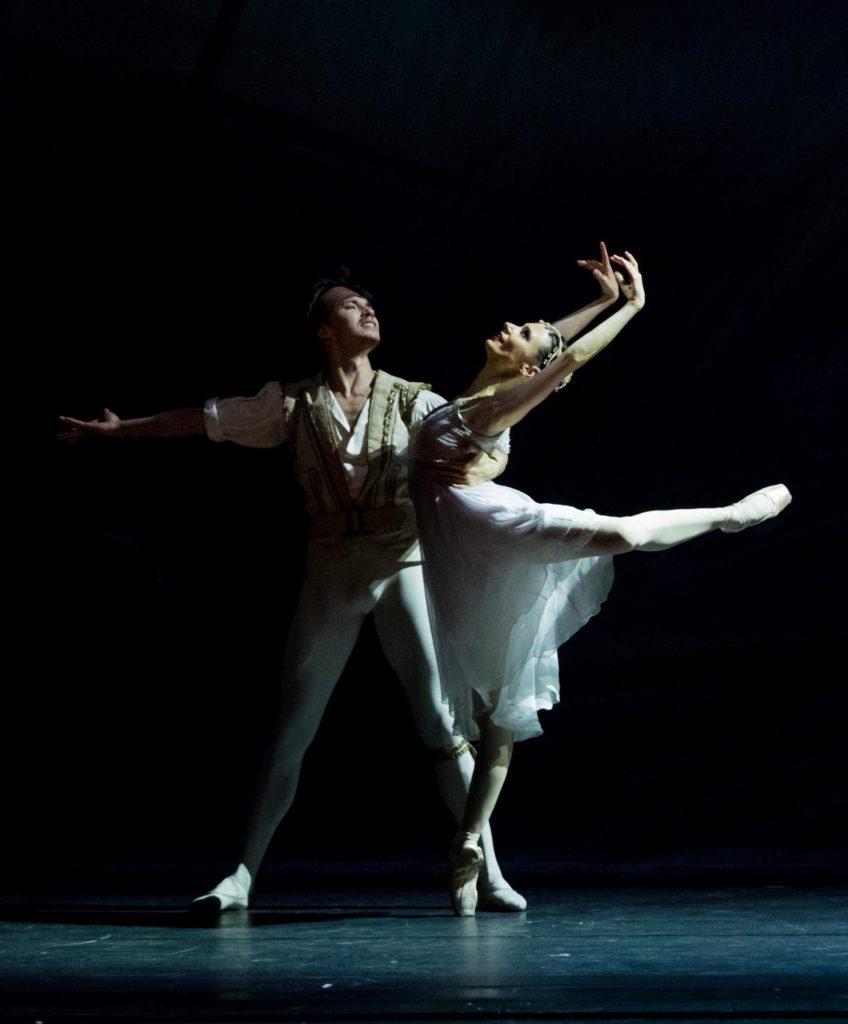 Compliments also to the cast radiating infectious temperament and pizzazz. Everyone seemed in sunniest form, a gaggle of vivacious child performers included. Konovalova made Medora a strong, self-assured personality with an aristocratic touch. She was certainly not someone voluntarily assimilating into a harem. Tonoli’s Gulnare was a soft-natured woman, her dance lyrical, sweet and captivating. Gabdullin, Szabó and also Sosnovschi underscored their roles’ tough masculinity with pithy, virile gestures and boastful jumps. Yet Gabdullin as Conrad would have been more convincing a lover with less smiling through gritted teeth. To enforce his leadership he at times puffed himself 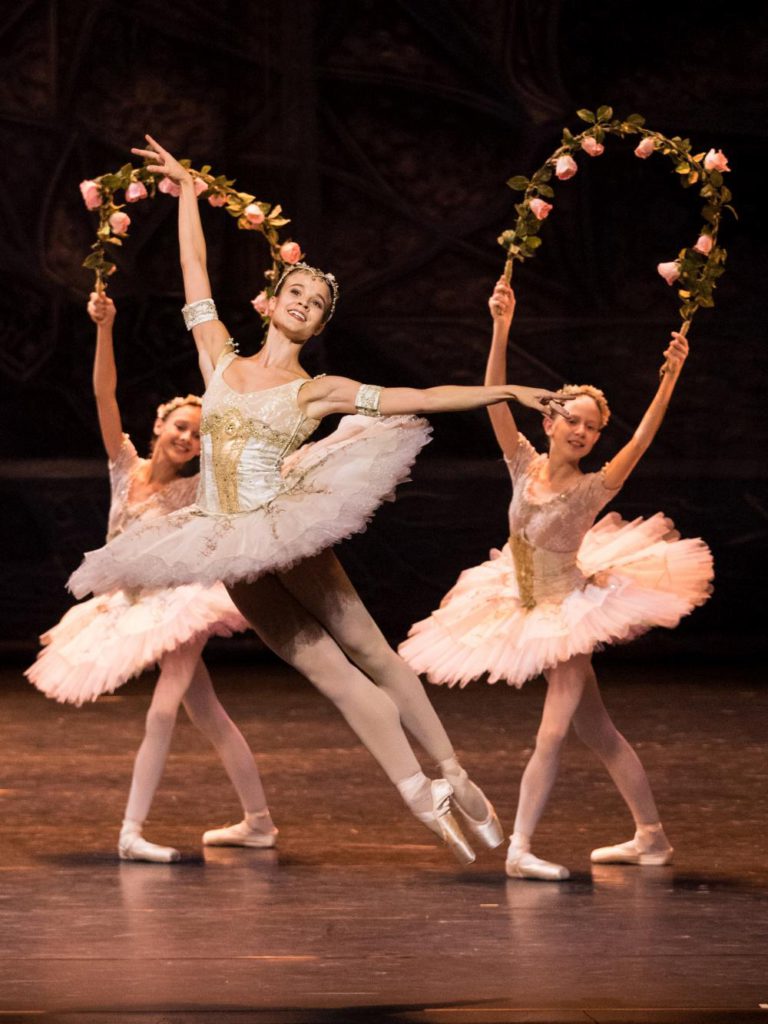 imposingly up. Actually, Szabó’s Birbanto seemed a likable guy, swift, pliant, a charmer with the female sex. No wonder that young and sprightly Zulméa (Anita Manolova), Lankedem’s daughter, soon casts a covetous eye on him. They form a nice couple! But had anyone imagined that acrid hate would seethe inside Birbanto prompting him to stab Conrad in the back?

Sosnovschi’s Lankedem deems himself so clever a tradesman that I wonder about his naiveté when being taken in by the corsairs in their pilgrims habit. He ushers them directly into the harem. There, three Odalisques (Adele Fiocchi, Natascha Mair and Anita Manolova) entertain the Pasha with solos, of which each has individuality and nuance. The tableaux of Le Jardin animé, the opium-fueled dream of the Pasha, receives spontaneous applause.

“Le Corsaire” is an old-fashioned ballet. It serves one stereotype after the other. Nevertheless the audience cheered enthusiastically. Quite rightly so! We felt fabulously entertained. 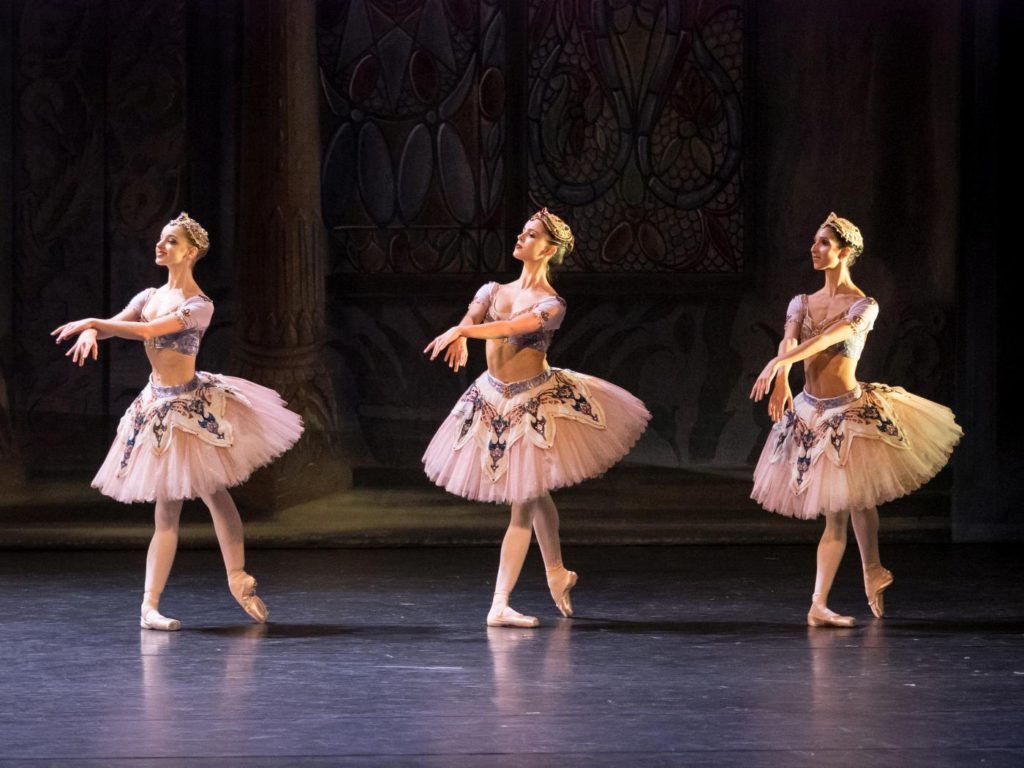