Calling two big stages home is a luxury few can call their own. Hamburg Ballet – John Neumeier enjoyed it for the seventieth time this autumn when touring the Festspielhaus in Baden-Baden for one week. Usually they bring along two pieces and one workshop moderated by Neumeier himself. This year the two ballets were “Romeo and Juliet”, scheduled three times with different leading couples, and “The World of John Neumeier”, a collection of excerpts from autobiographically significant pieces. It premiered in Tokyo earlier this year and was shown on two consecutive evenings in Baden-Baden. I saw the first performance.

“My world is dance”* proclaimed Neumeier before the curtain behind him went up and he mingled with the hurly-burly of the cast of “Bernstein Dances” (1998). This was his only sentence spoken live; throughout the rest of the performance, well worded recordings of Neumeier guided the audience through the program. Pity! He is much more natural, and likable, when speaking live, without reading from notes. The audience learned via loudspeaker that for little John the parental living room turned into the big stage when he listened to Leonard Bernstein’s “Candide”-overture. This overture, as the whole evening’s music, was recorded too. From time to time it sounded tinny.

The snappy steps of “Bernstein Dances” and its jaunty dancers in posh black tails and toppers echoed the fascination Neumeier must have felt as a boy. ”As long as I remember I wanted to dance”* and indeed, he turned up from amidst the dancers’ crowd, landing from a somersault over their heads at the center of the front stage. From then on, Neumeier left the stage to Lloyd Riggins, his desired successor in 2019 and the connecting figure between the danced memories. Both Neumeier and Riggins wore identical white pants, a white shirt and a short, black tie. Riggins, first watching from the perimeter, finally rolled up his sleeves and plunged into “Shall we Dance” (1986), while Neumeier reminiscences over “the old musical films my mother took me to. The childlike delight in music and the enthusiasm for Gene Kelly, his vigorous dance, left their mark on me until today.”* In Baden-Baden Silvia Azzoni and Alexandre Riabko provided a spirited Gene Kelly-type musical feeling though sparing a tap number and, well, singing.

Neumeier’s voice, getting more and more pathetic, took us to his first encounter with ballet: “Finally, when I was allowed to nervously stand at the ballet barre for the first time, (…) trying to do the unfamiliar exercises, I smiled. In fact I was overjoyed and somehow, though things were strange, I had the feeling of coming home.”* This feeling inspired him to create his “homage to this great tradition” of ballet, his version of “Nutcracker”. Neumeier’s Marie (Emilie Mazoń) is a girl introduced into the world of ballet by the quirky Drosselmeier (Lloyd Riggins). This time the world of ballet was reduced to the rehearsal of Louise (Hélène Bouchet), the prima ballerina and the premier danseur Günther (Alexandr Trusch). 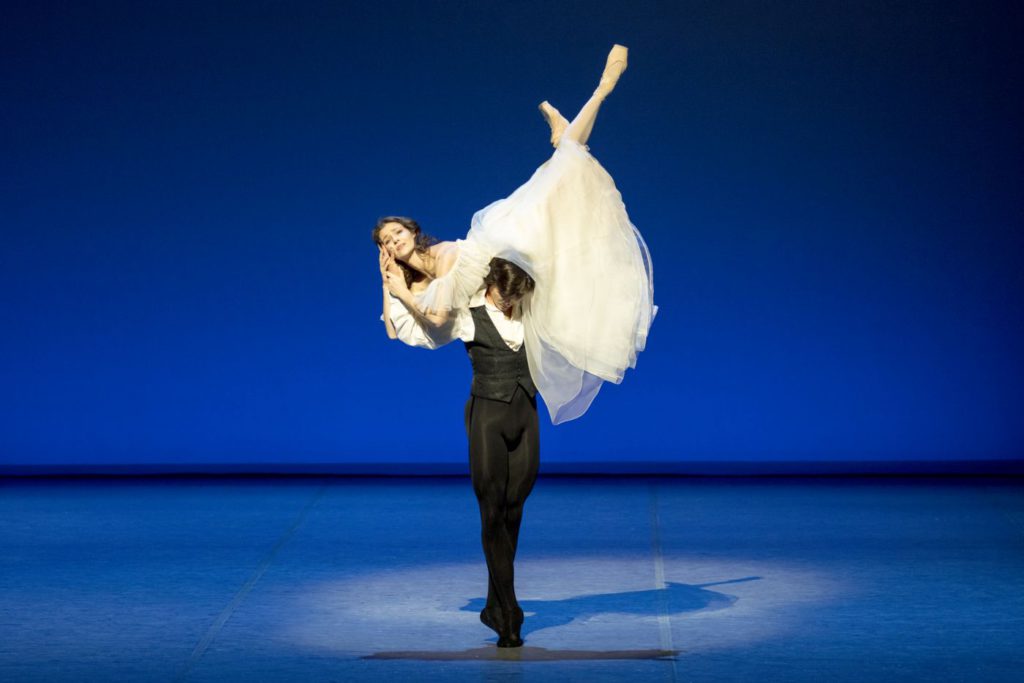 Calling the creation of new ballets the most exciting part of his work, Neumeier transitioned seamlessly to his “Death in Venice” (2003), in which choreography, instead of writing, becomes the metier of Gustav von Aschenbach, a role tailored on Riggins from day one. Carolina Agüero and Karen Azatyan symbolized Aschenbach’s concepts. He moved them back and forth, rearranged them, tried new shapes, was dissatisfied and started anew.

The following “Intermezzo” crammed the protagonists of four ballets on stage to highlight Neumeier’s merits in transforming myths into dance. Orpheus (Alexandre Riabko) met King Arthur (Lloyd Riggins), Odysseus (Edvin Revazov) and Sylvia (Hélène Bouchet) plus her favorite nymph Diana (Leslie Heylmann). The respective ballets premiered between 1982 (“The Saga of King Arthur”) and 2009 (“Orpheus”). The five figures disappeared soon making way for another figure of a saga, the Norwegian Peer Gynt. Carsten Jung was Peer, Alina Cojocaru his patiently waiting Solveig. Both danced the scene in which the young Solveig finds Peer in the mountains and the two reunite. Cojocaru later also portrayed Marguerite in “Lady of the Camellias” next to Trusch’s Armand in the pas de deux at the countryside. Cojocaru has the rare ability to create the most impact by utmost genuineness and simplicity. Trusch’s Armand, invariably smiling kindly, didn’t match her depth.

Neumeier’s preaching on “dance as an art form, which mirrors the human soul, one’s mental depth and greatest desires, one’s relationship to God, one’s doubts and uncertainty, but also the joy and enthusiasm in faith.”*, accompanied by the melodies of Johann Sebastian Bach’s music were the prelude to an excerpt of his “Saint Matthew Passion” (1981). But compared to the video recording made during a tour to the Festspielhaus in 2005 and the performance I saw in Hamburg in 2011, the group scenes to the music of the chorus “Come, ye daughters, help me lament” seemed tediously hollow rituals this time. Those continued in “Peter, meanwhile, sat outside in the court”, “Surely thou also art one of them”, “Have mercy; My God” and “Although I have strayed from thee” follow. Only the energetic choir “Rejoice, exult” of Bach’s “Christmas Oratorio” together with the briskly jumping dancers revitalized one’s spirit before the break.

The program’s second part started with an excerpt of “Nijinsky” (2000), one of Neumeier’s signature pieces. We witnessed Nijinsky (Alexandre Riabko), whose thoughts, memories and hallucinations merge to chaotic inner pictures. His brother Stanislav (Aleix Martínez) suffers from mental illness; the turmoil of World War I melts into the uproar the “The Rite of Spring” caused in Paris in 1913; Petrushka (Lloyd Riggins) turns up, sick at heart; finally Romola (Hélène Bouchet), Nijinsky’s wife, drags her mentally shattered husband on a wooden sledge. It is winter in St.Moritz/Switzerland, where the couple had settled, but also winter in Nijinsky’s soul. For the following thirty years he will rely on nursing.

Of his several ballets on plays and dramas by Shakespeare, Neumeier chose a scene of “Hamlet” (1997), in which Hamlet (Edvin Revazov) bids good-by to Ophelia (Anna Laudere) prior to his departing for Wittenberg. But did Neumeier in this pas de deux really “realize scenes of Shakespeare’s dramas, which the poet suggested but did not put into words”*?

The evening’s highlight was “Opus 100 – for Maurice”, an all-male pas de deux created in 1996 on the occasion of Maurice Béjart’s 70th birthday. The music is by Simon & Garfunkel: “Old Friends” and “Bridge Over Troubled Water”. Alexandre Riabko and Ivan Urban finally sent out the sparks I had missed in many of the other pieces. Cheers to them! Watching Riggins was a delight. No one could believe that he would celebrate his forty-seventh birthday the day after the gala. He jumped and dashed across stage with a youngster’s verve.

Yet apart from that, we saw an abundance of routine dancing, but very little gripping interpretation. Neumeier’s choreography is, for example, in the repertory of the companies in Stuttgart, Munich and Vienna. From what I experienced these companies brought more life to the pieces than their Hamburg colleagues have done in some time. Is this the result of decades of an all-Neumeier diet day in, day out? A diet Neumeier has often described as suffused by deep humanity, faith and love. Every day, Neumeier declared in the final recording, his work reminds himself of the movement of Gustav Mahler’s Third Symphony, “What Love Tells me”. Indeed “Third Symphony of Gustav Mahler” (1975) is an excellent piece, but this time Neumeier gave it an odd overtone. Still clad in white, he wandered between his dancers in their red costumes and looked here and there like the creator on the seventh day. And he saw that it was good.

Until then, the central couple was danced by Silvia Azzoni, representing the spirit of pure love, and Carsten Jung, experiencing this love. For the final scene Neumeier replaced Jung. Standing in the center at the back of the stage he reached out to Azzoni. The ideal of love, she slowly walked by, unimpressed and unreachable. Neumeier took over this final scene in the same way at the Nijinsky Gala in Hamburg in 2013 when celebrating his 40th jubilee as artistic director. Back then the moment was touching. Its repetition in Baden-Baden failed. Does Neumeier need to emphasize his ego in such a way?

(* Translations from the German made by me.)