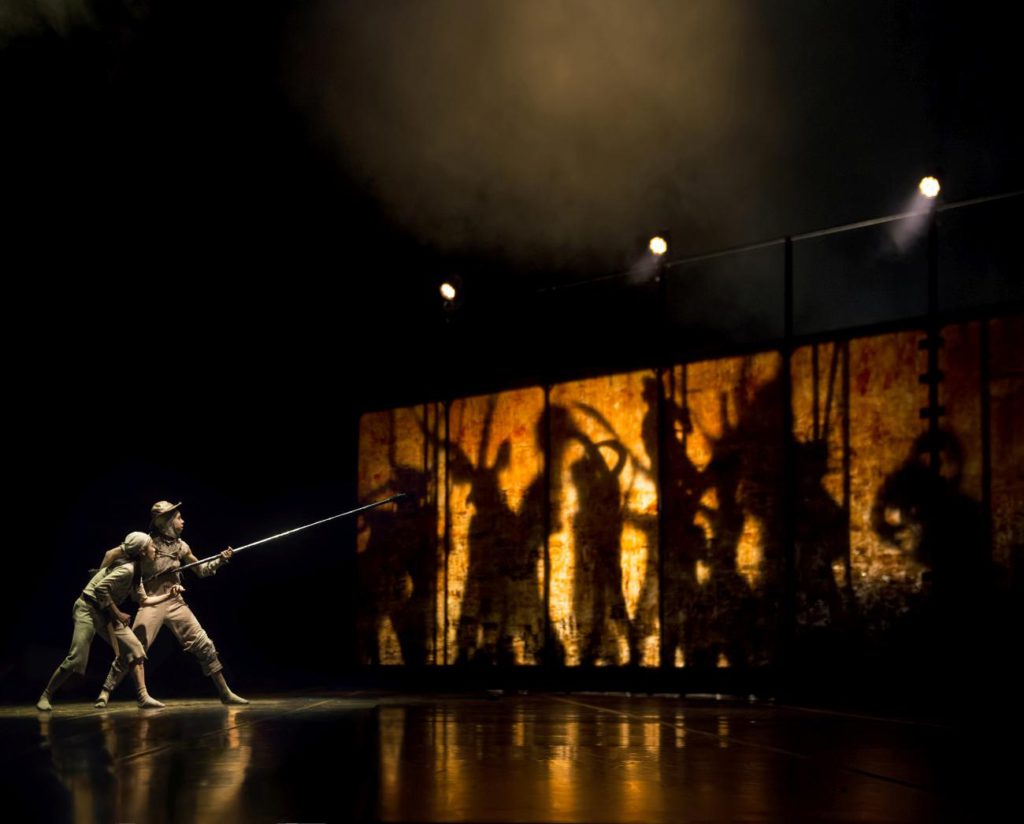 “Don Quixote” is best associated with the showy dancing of snappy youth, lighthearted joie de vivre and air sizzling with eroticism. The Ballet of the State Theater Nuremberg’s new “Don Quixote” offers the opposite. Goyo Montero, artistic director of the company of around twenty dancers, boiled down the traditional three acts to a single one lasting 90 minutes. According to the program booklet, the production begins in a mental institution, a prison or a refugee camp. Given the huge gunny sacks serving as seats, buffers or protective wall (set design by Eva Adler and Montero), the scruffy gray and brown costumes and the simple bag-like headdresses credited to Angelo Alberto and Montero, I thought of mill hands kept in arrest. But regardless of the place one imagines the figures inhabiting it are insane.
Madness had already been the topic of one of Montero’s former ballets, “Latent”, which I haven’t seen. In “Don Quixote,” all figures are struck by various degrees of mental illness. 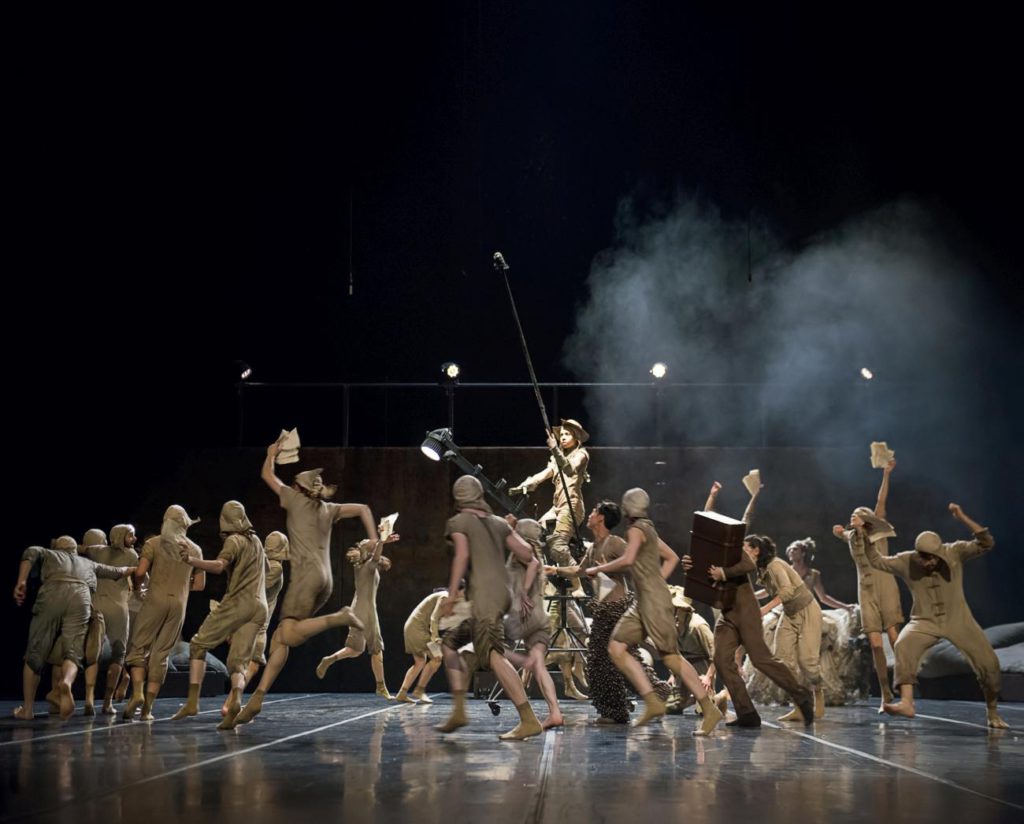 Montero reduced the number of roles, leaving only core ones. Don Quixote, either danced by a woman or a man (I saw Rachelle Scott), has autistic features. Sancho Panza (Natsu Sasaki) is a checkered character, courageous and loyal on one side, a screwy tyrant on the other. Oscar Alonso portrays the Author (Miguel de Cervantes isn’t mentioned by name). On closer look he has weird facets too. Aldonza (Esther Pérez), who in Don Quixote’s imagination turns into his lady love Dulcinea, seems regressed and led by her instincts. Her behavior flips between fear, aggression and being attracted to Don Quixote. Dulcinea is an en travesti role depicted by Iván Delgado in a shabby crinoline. Don Quixote’s nag, Rosinante, becomes a movable spotlight; Luis Tena, on all fours, plays Sancho Panza’s donkey. Kitri, Balsilio, gypsies and toreadors were dropped. 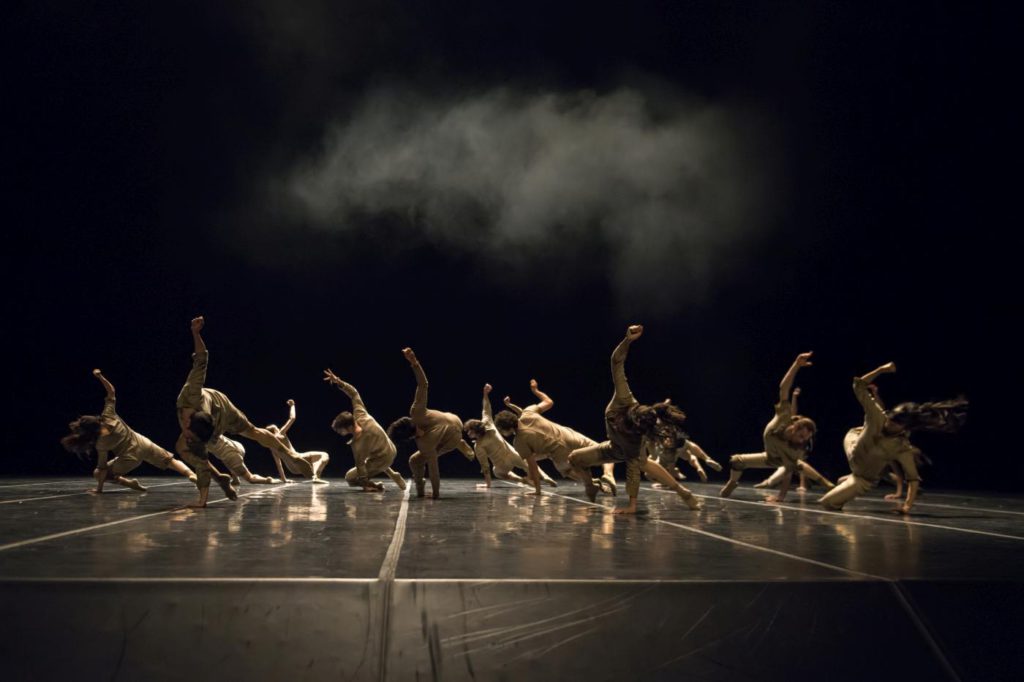 Of the bleak figures, who was the knight errant Don Quixote wasn’t clear from the beginning. Only after a lengthy ceremonial search using the knight lance as a dowser was he determined. His decision to depart, undo wrongs and bring justice to the world was cheered on by the mentally ill, and for a moment, one hoped for the liberation and recovery of all suffering. But no, despite all brave actions, the madmen remained mad.
Don Quixote’s heroic actions included an attempt to storm a rampart, which prompted flashing red warning lights to rotate and a jarring siren to go off. Upon being touched, the wall then magically opened by itself, ending the nervy alarm. Other sources of danger were shadow plays: a bear or another sort of beast snored loudly; a row of captives rattled with their chains, and for a brief moment, the arms of windmills rotated. It was unclear why a 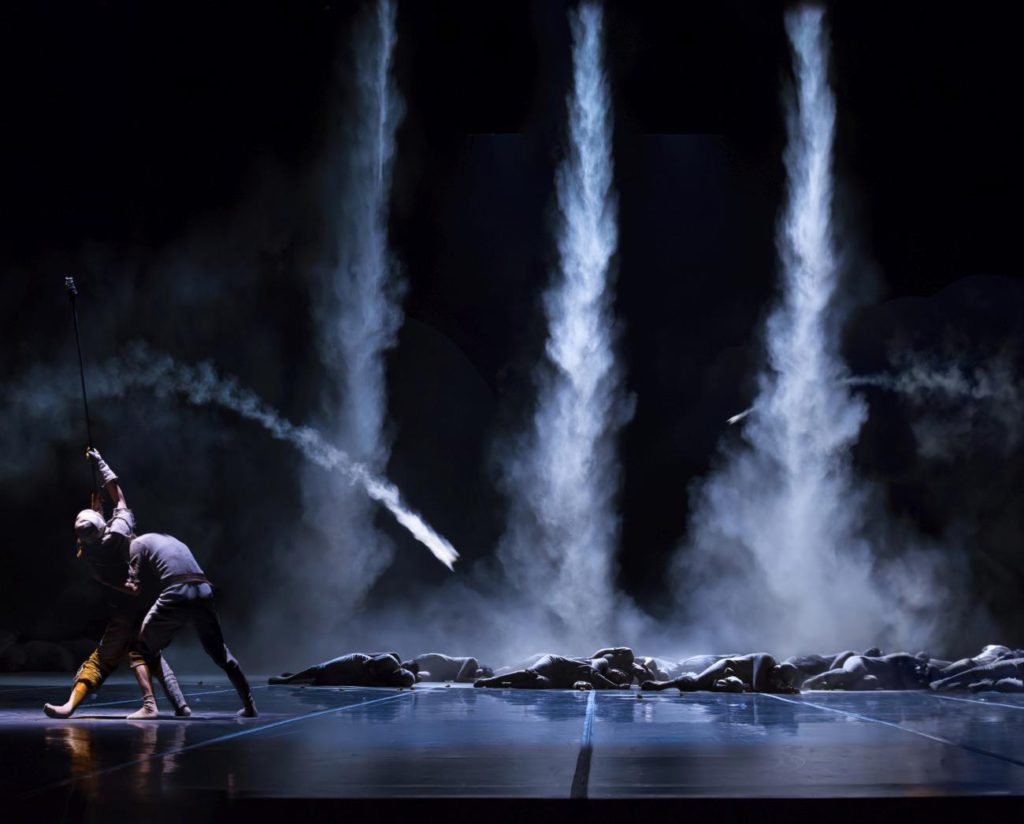 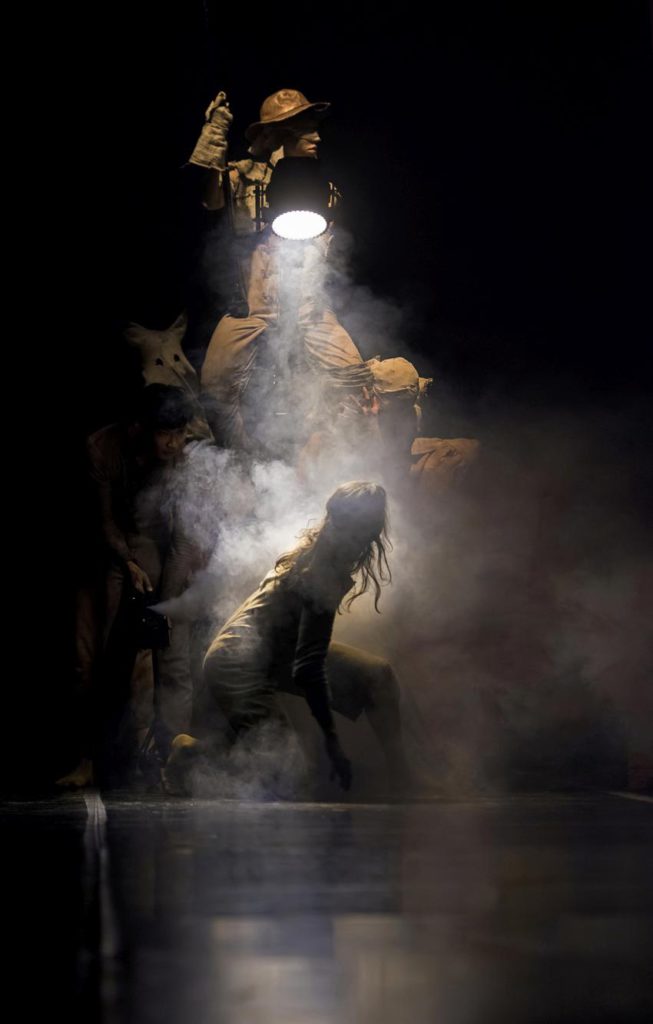 Semana Santa-like procession paced across the stage. The scene’s only moment of surprise was when the torches some carried were doused simultaneously. Then one dancer hurried from one wing to the opposite, clouding the stage with wafts of mist with a portable fog machine.

Lighting by Olaf Lundt and Montero was dim, and the following scene was – except for whizzing spotlights and strobe lights – dark as the night. That spared Montero from having to choreograph the riot that Don Quixote and Rosinante were involved in. He substituted it with deafening street noise and clamor. Why a naked woman stood surrounded by men and women in proper office clothing shortly afterwards wasn’t conclusive. The bystanders dressed her with patience-killing slowness, piece by piece, while they themselves, one after the other, undressed to the 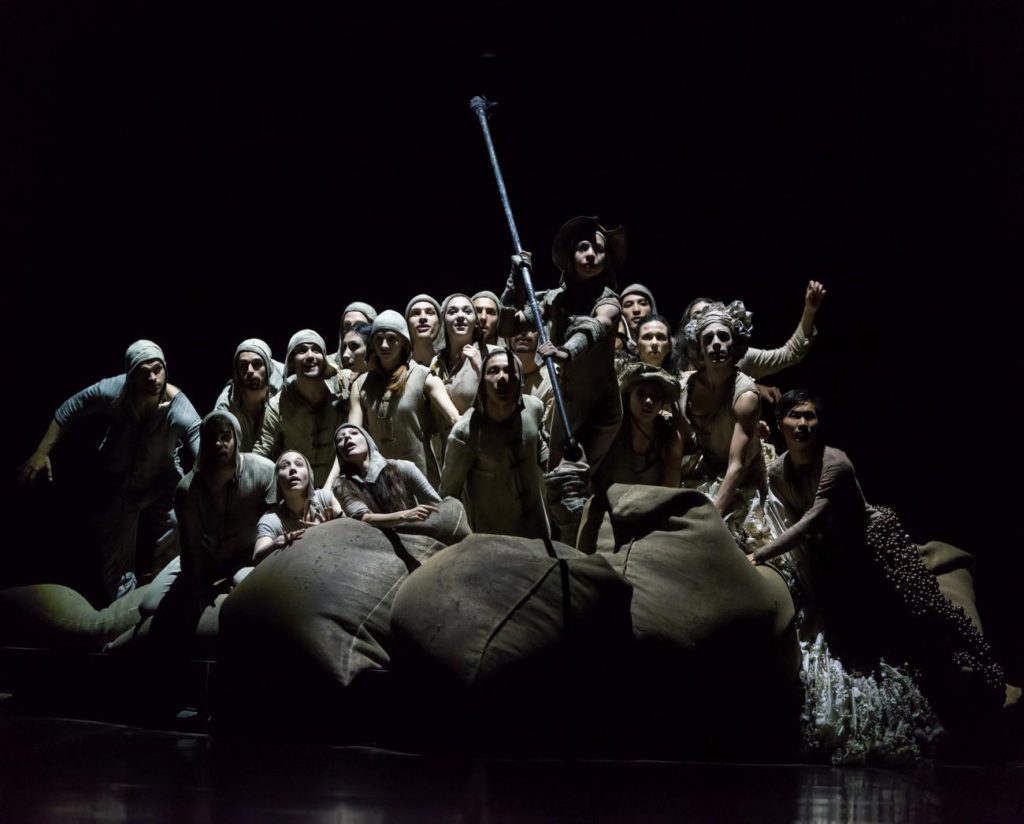 underpants. An allusion to Francis of Assisi giving away his clothes would be far-fetched. Maybe Montero wanted to sex-up the piece to stir his audience’s interest? The following minutes, filled with using a lamp on a long rope as a swing and with rattling coins in a steel drum, dragged on.

Which talents of his dancers did Montero bring off in this piece?
Alonso’s solo had a touch of break dance; its meaning was enigmatic. Pérez fidgeted, hopped madly around, fell into Scott’s arms like a sack of flour and was dragged along by her. The duet between Don Quixote and Sancho Panza consisted of walking, running, giving the other a piggyback ride, and doing playful gymnastics. Often, large parts of the group stood or lay around, immersed in their tics and quirks. On a few occasions they jumped around like crazy or like they were heavily intoxicated. One group dance had them hang feebly around, struggling to keep themselves upright 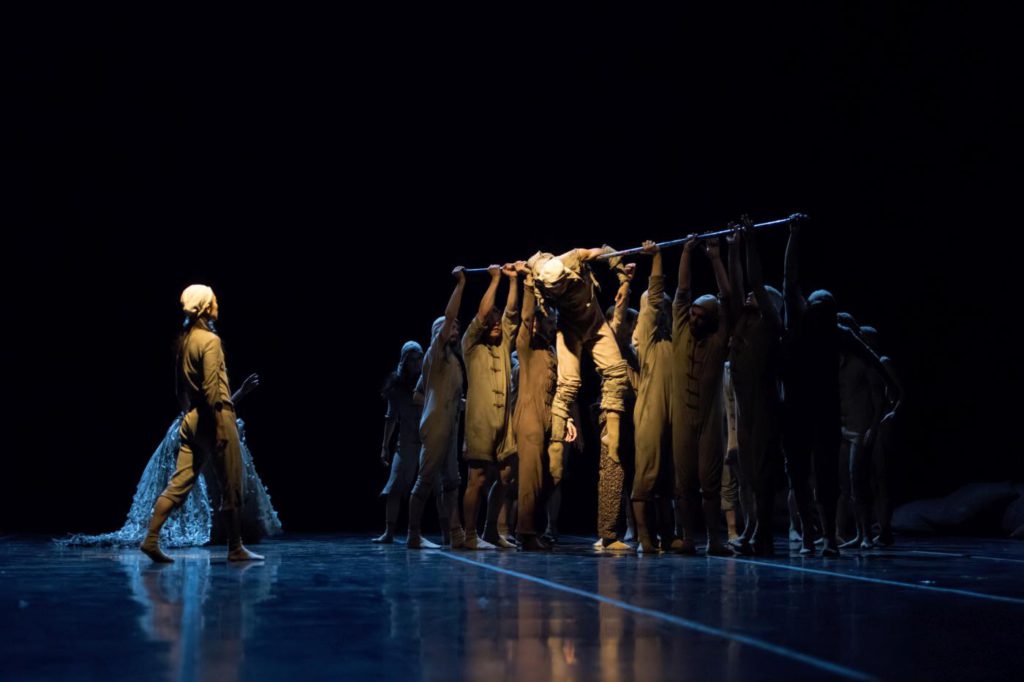 and repeatedly slumping to the ground. The dancers talked, shouted, shrieked piercingly and Delgado, along with pattering around, even sang a Spanish song. Its German translation was displayed as surtitle. The song, “A Ciegas” (meaning “Blindfolded”), accompanied the love relationship between Don Quixote and Aldonza. Lines like “I’d like to nail crystal pins in my eyes, so that I won’t have to face you …” exemplified the state of affairs of this romance.
Dance was overall sparse, so terming the work a dance piece – as which it is announced – is overstated. Pantomime with dance scenes fits better. 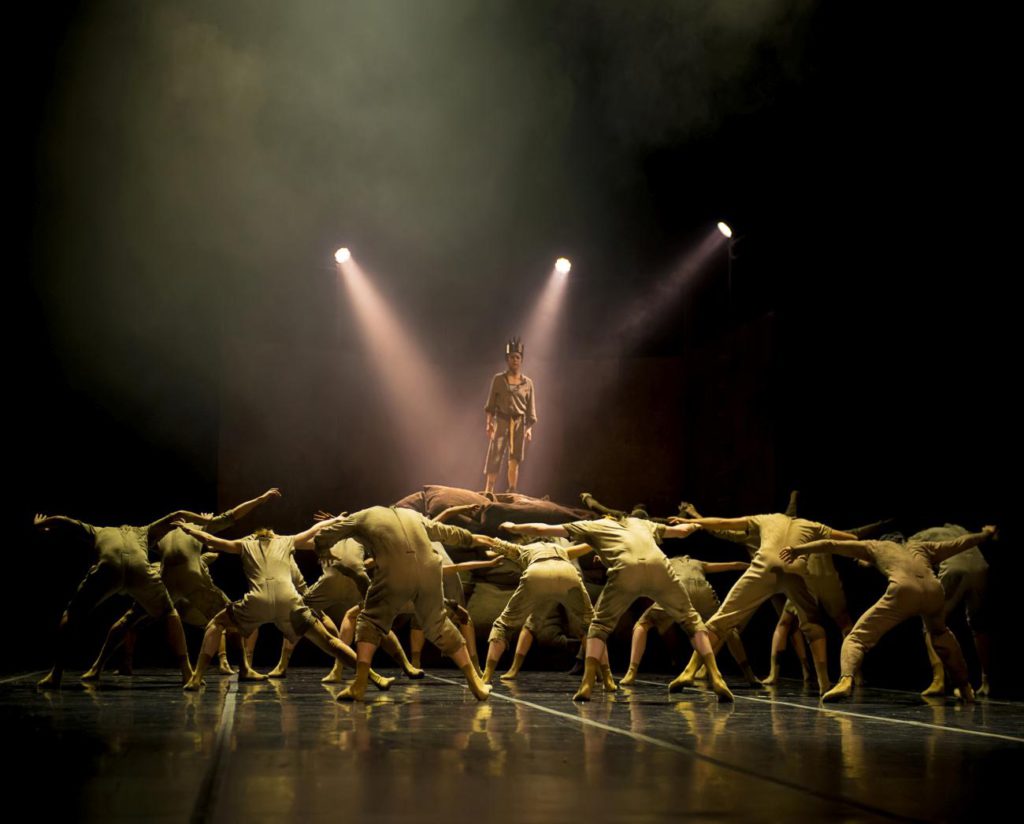 The characters together with the many low-action phases accounted for a gloomy, overall tedious affair. Montero, by all means, had some good ideas, but rather than developing them he belabored them and ended up straining for one effect after the other. People suddenly fell from above to the ground; slips of paper flew through the air; the fog machine was employed a second time; a knight in full armor stomped through the scene; the blue spotlight reflecting on the super-polished metal made him look like a vintage comic figure gone astray.

The sound design of Vancouver-based Owen Belton provided some aha-moments. His commissioned score included special everyday-sounds – chimes of bells, the whistling of wind, walking on shards of glass, the rattling of a metallic laundry bin, the ringing of a myriad of jingles sewed on pants – which he acoustically exaggerated. Initially, this made one prick up one’s ears, 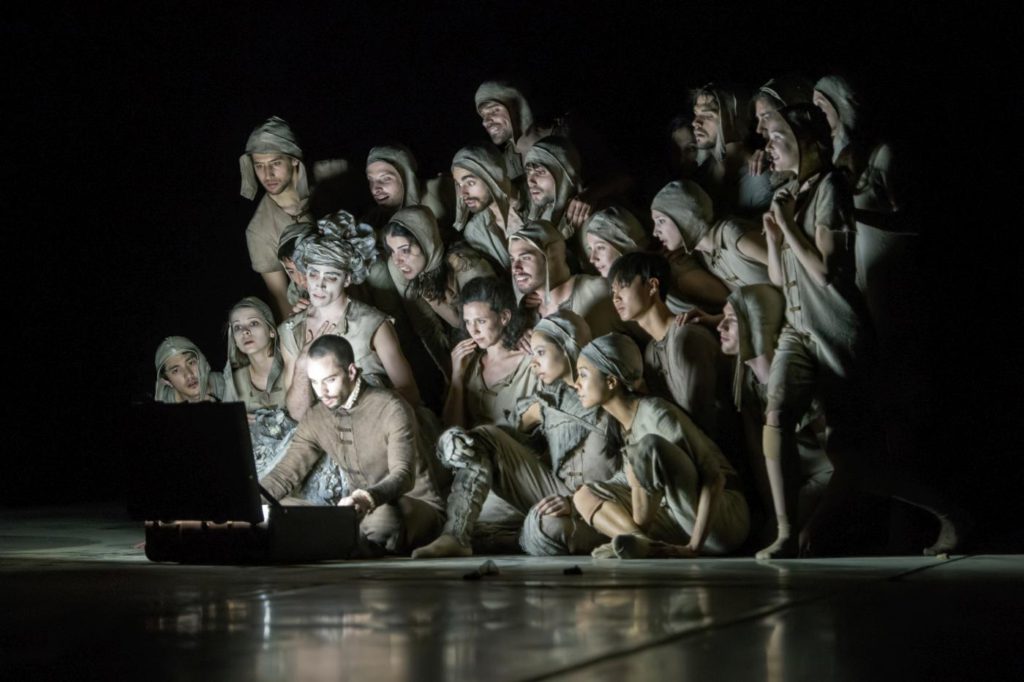 yet repetitions faded the effect. Montero tried to mask voids in his choreography by turning up the volume, so that the bass hums made the seat cushions vibrate.
For the final scene Belton used the larghetto of Chopin’s Piano Concert No.2. It was the wrong choice. One automatically thought of “Lady of the Camellias,” of Armand confessing his love to Marguerite and only became aware that Neumeier’s piece and Montero’s are poles apart.

Recently, children of kindergarten-age were among the audience of “Mayerling” in Munich. This time, a young girl sat two rows in front of me. While other members of the audience had left in the middle of the piece, her parents stoically subjected her to a lunatic asylum ambiance including scenes with self-flagellation and brawl. Age restrictions for performances are common abroad. It is time to implement them in Germany as well. 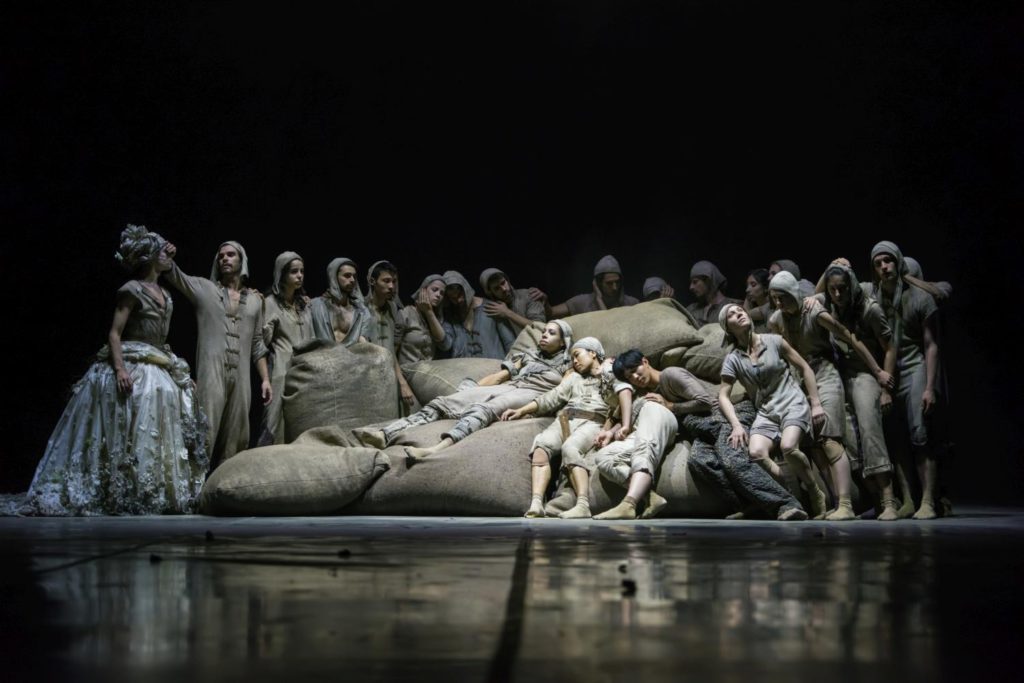