The story of Hans Christian Andersen’s fairy-tale “The Little Mermaid” is quickly told: The little mermaid rescues a young prince from being drowned and falls in love with him. Driven by her strong desire for the prince and moreover longing for an immortal human soul she decides to leave the underwater world. Helped by the sea witch she becomes human, but on the condition that if she fails to win the prince’s love she has to die. Finding the prince, the mermaid suffers tremendously on shore, not only physically – every step feels like treading on knives’ edges – but even more emotionally, as she witnesses the developing affection between the prince and another woman – a human one. At the end, the mermaid’s love remains unrequited. She transcends to an entity of an upper sphere and is given a soul.

The Danish author actually wrote no fairy-tale for children in 1837, but instead a concealed depiction of his personal drama as homosexual. Like the mermaid losing the prince, Andersen’s love for his guardian’s handsome son Edvard Collin was unfulfilled. Collin married Henriette Thyberg which is exactly the scene John Neumeier’s “Little Mermaid” starts with. By remembering the wedding, his poet, unmistakably the figure of Andersen himself, slips into his own memories and fantasies.

Neumeier choreographed and staged the ballet 2005 in celebration of Andersen’s bicentenary birthday for Copenhagen’s Royal Danish Ballet. He also was stage, costume and light designer. The music, commissioned by Russian-born Lera Auerbach, was revised for the Hamburg premiere in 2007.

To represent the mermaid’s lovely voice Auerbach uses a Theremin. This unique instrument (an outsider of the orchestra, “lonely” as the mermaid) is played without physical contact only by moving the hands in an electromagnetic field.

The underwater world created by Neumeier is a beautiful yet also mysterious and fierce playground for sea creatures. Nevertheless Auerbach’s longing sounds give an idea of the mermaid’s deep wish to leave. High above at the water surface huge ships occasionally pass by, one of which later carries Edvard – the prince – and his crew. For the mermaid’s costume Japanese Kabuki- and Noh-Theater were source of inspiration: a special overlong trouser conveys the impression of a lissome fishtail.

Compared to the ocean, the world of humans looks odd: sailors drill as if being tough guys, nuns stalk around with their plain Jane convent school girls (one of them is Henriette, the princess respectively, who discovers the prince at the seashore). The society the prince feels comfortable with is a group of neurotic, affected people, believing themselves to be chic and sophisticated. Unlike the mermaid they have no problems at all with the narrowness of the rooms they’re living in, perfectly fitting their minds. Regardless of how much the mermaid tries to align herself to the humans’ world, she remains a foreign body, a misfit throughout.

Her creator, the poet, finally comes for her. By ascending to another sphere both gain inner freedom. In their final synchronous pas de deux amidst the stars they’re like one. The mermaid’s fate is the poet’s and vice versa. An unpretentious and strong finale, not at all kitschy and certainly no metaphor for religious mysticisms like “suffer and you shall be redeemed” either.

Silvia Azzoni, Hamburg’s mermaid from the very beginning, also on this tour to Baden-Baden, took on the title role. Azzoni is an artist, who doesn’t merely put on a mask but transforms to her role. Smoothly gliding and undulating she was completely in her element at first. A charmingly self-assured and curious water beauty! But to see her scream  voicelessly when stripped off her fishtail and to witness the dreadful pain caused by every footstep afterwards was heartrending. (Thankfully Neumeier abstained from a detail of the fairy-tale: his mermaid’s tongue isn’t cut off by the sea witch.) Though the mermaid is aware of her awkwardness and clumsiness, she tries everything to win the prince’s heart. Azzoni, small, nimble and with expressive eyes, poignantly conveys the desperation and helplessness when gradually realizing that she has failed. Her inner struggle when facing the chance to get back her fishtail by killing the prince was deeply touching.

As the awesomely made up sea witch, Alexandre Riabko brought the role’s powerful and ferocious facets forward. I remember earlier interpretations where a shimmer of compassion for the mermaid shone through, “Come on little mermaid, take the knife and come back to us” the wizard seemed to say. However Riabko’s sea witch was merciless and full of cynical traits.

Sasha Riva danced the mermaid’s creator, the poet. Riva, a graduate of the School of the Hamburg Ballet, joined the ensemble in 2011. Undeniably a great talent, he hasn’t yet the poise and strong stage presence of this role’s predecessor, Lloyd Riggins, an experienced character actor par excellence. However at twenty-one Riva will have plenty of time to mature. Already in this debut, he presented a sensitive characterization of an emphatic man, who, scared by his own creation’s fate, even runs away, but finally thrusts the knife firmly into the mermaid’s hands. Coincidentally Riva even slightly resembles Andersen with his soft facial features and small, but long fingers.

Edvard, the poet’s beloved one, and the mermaid’s prince in the core story, was Carsten Jung. In contrast to Andersen’s original, where the prince cannot be blamed at all for not noticing the mermaid’s love, Neumeier’s prince attracts less sympathy. His is a superficial nature, full of his own importance and – what’s totally absurd but a telling detail that says it all – he enjoys playing golf on board of his ship. One cannot be seriously angry with Jung’s prince though he ignores the mermaid’s love. He is simply unable to sense anything beyond the limited bubble he’s familiar with. The single moment when a whiff of awareness is close, Jung smiles away. His princess – Edvard’s Henriette – was Hélène Bouchet. A beauty of a woman, well-bred and urbane, she confidently occupies her territory. The couple suits each other well.

The last time I saw “The Little Mermaid” – in April 2012 on the company’s Hamburg home stage – the ballet totally absorbed me. The sea witch made me shudder, the mermaid brought tears to my eyes and I even felt the resonance of the seaweed’s undulations. This time what happened on stage was more distant and lacked verve. Only on three occasions did the energy increase: when Azzoni stopped, turned round to the prince and – realizing that she had fallen in love – swam back to rescue him. This was the evening’s most powerful moment! Strong also the encounter of the prince and the princess when becoming aware of each others attraction. Finally, Azzoni’s and Riva’s last pas de deux had special atmosphere. 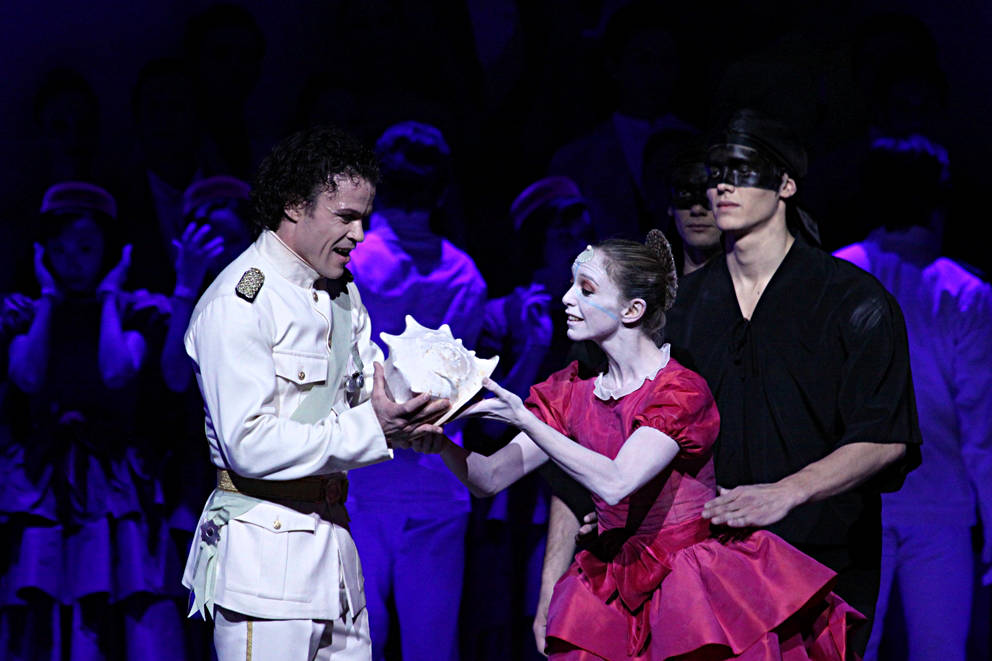