“Woyzeck” is Christian Spuck’s second work of choreography based on a piece by the German writer Georg Büchner. In 2008 Spuck already had staged the comedy “Leonce and Lena”, two years later the gloomy “Woyzeck” premiered in Oslo. Formerly resident choreographer of Stuttgart Ballet and since 2012 artistic director of Ballet Zurich, Spuck literally brought “Woyzeck” home. Büchner, who died well ahead his time in 1837 at the age of twenty-three due to a typhus infection, spent his last month in Zurich and moreover was buried there. Yet “Woyzeck”, the last piece of his small oeuvre, couldn’t be finished. The handwritten fragments later were assembled and underwent several edits.

Büchner not only was an author but also a natural scientist and revolutionary. After circulating “The Hessian Courier” in 1834 , a political treatise calling for “Peace to the shacks! War on the palaces!”, “wanted” posters were put up for him. Thus Büchner was familiar with fear, with a basic anxiety, probably also grounded in his childhood. Fear, suppression and social constraints are also central motifs in “Woyzeck”: Woyzeck, an ordinary soldier, loves Marie. They have an illegitimate child together. To make ends meet he takes on several extra-jobs, rat races in which he’s always the underdog. When detecting that Marie has an affair with a drum major, Woyzeck, psychologically and physiologically already in frail health, runs amok. He stabs Marie to death.

Büchner’s sources of inspiration were a crime of passion in Leipzig and a murder case due to debts. Also incorporated in the plot are the historical dietary experiments that the scientist Justus von Liebig imposed on soldiers in 1833. To find out if the military and the proletariat could be nourished more cheaply, a special diet restricted to mushy peas for three months was tested. Naturally the experiment went thoroughly awry. Amongst other symptoms the probands developed hallucinations. No wonder Woyzeck heard voices coming out of the ground and was totally out of it.

Spuck doesn’t refer to the mushy peas-story, only his Woyzeck’s light green trousers and shirt might allude to this detail. Woyzeck, danced by Jan Casier, is a crouched lanky man rushing around on clunky shoes.

As one on the lowest level of social ranks he’s bullied by almost everyone – by his captain, whom he shaves, by the doctor and the professor experimenting with him, and also by the drum major who trashes him – he finally hunches up on the ground holding his head. Totally frightened and impotent, he neither wants to see nor to hear any more.

Katja Wünsche, ex-ballerina of the Stuttgart Ballet, followed Spuck to Zurich. As Woyzeck’s Marie she’s no innocent victim, but rather the one who lusts after intense sexuality and elementary physical

satisfaction. Woyzeck isn’t the right man for her. From the very beginning there’s hardly any flow in their relationship, let alone harmony. “Who is this awful man?” her look seems to ask shortly before her death. Their little son Christian (Ludwig Hoefs) mirrors the family’s unrelatedness. He either sits motionlessly on the floor, gazing down, or constantly rocks his hobbyhorse. What a desolate and emotionally cold void!

Though no beauty in her plain gray dress, Marie easily attracts men. The drum major – William 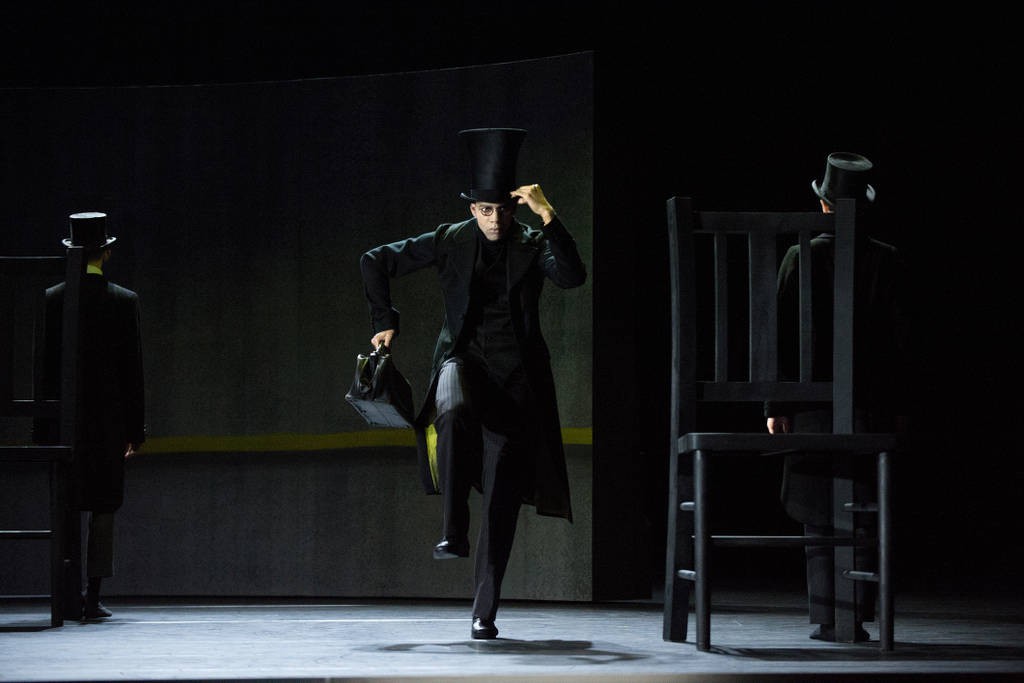 Moore, like Wünsche previously a Stuttgart dancer – is the winner. Though like a stiff tin soldier, a caricature of a conceited rooster pretending to be a wild lion, he gets Marie and both fully live out their sexual appetites. Woyzeck’s captain (Cristian Alex Assis), a fat, dirty swine, also has cast a covetous eye on Marie, but would never work up the courage to act upon his desire. Although bulky and of unhealthy physique, Assis sways his legs very nimbly. The doctor (Manuel Renard) as well as the professor (Filipe Portugal) misuse Woyzeck as a human guinea pig. Renard skillfully exaggerated his role’s oddities, while Portugal’s professor had undistinguishably pale choreography.

This leads to the weak point in Spuck’s creation: his choreography lacks consistent strength. Scenes such as when Woyzeck is surrounded by his four tormentors are dispensable fillers. Unnecessary repetitions – at least three times Woyzeck lay backwards on the table like an animal to be slaughtered – as well as predictable and sometimes scarcely inventive configurations also weaken the whole: Woyzeck, the misfit of his corps, stood stoop-shouldered at the sidelines, a miserable two-legged question mark. Later he was on all fours and for much too long a time he simply sat scared on the ground. If filled with presence, such scenes can be highly expressive. However when the choreography is danced as if learned but not lived, the driving force, the emotions’ momentum, cannot unfold to its fullest.

The drummers were strong, raising an energy of relentless urgency. Also the group dances of six couples are well-made, representing the dwellers of the godforsaken village, witnesses to the unfolding story. The uniformly pale, peaked women in high-necked blazers, more reminiscent of prettied straightjackets (only their skirts swing freely), together with their similarly featureless partners, perfectly convey an atmosphere of a hidebound village community. Constraints and resentments dominate everyday routine. It’s only important to outwardly conform and be blameless. The tense discrepancy between the protagonists’ inner life and their outward appearance is splendidly emphasized by the choice of music: a mix of Philip Glass, Alfred Schnittke, Martin Donner and György Kurtág. Simple, innocent melodies, march music or festival music are frequently played exactly when murky things are going on.

Sets and costumes are by Emma Ryott, who created a rotatable wall, one side representing indoors, the other showing a cluster of nestled little half-timbered houses with pointed gables similar to Büchner’s birthplace in a Hessian village. Fittingly it’s Woyzeck who has to rotate this scenery.

In the end, everything merged to a powerful finale. Both realities became evident: Divided by the wall, the right side of the stage showed the village folk enjoying their dance. On the left side lay the murdered Marie shrouded by soft drizzle. Woyzeck – after tentatively touching her cold dead fingers – shrunk back. He belonged nowhere.