In Fokine’s “Les Sylphides” Malakhov danced the poet – an aged version respectively, with Yoshioka as leading sylph, who lacked the ultimate bit of softness and tenderness that evokes a feather-light Romantic sense. His second role was the swan in the duet “Leda and the Swan” from Roland Petit’s “Ma Pavlova”. But Nadja Saidakova, being at

his feet as the ensnaring Leda, seemed more a millstone around his neck than the object of manly desire. Both pieces were unwise choices, since Malakhov doesn’t cut a fine figure any more, especially as a bare chested swan. Though his arms move eloquently and lyrically they cannot conceal his physical strain.

Sidi Larbi Cherkaoui’s new creation for Malakhov, the solo “Icarus” to piano music by Szymon Brzoka in the program’s second half was more suited to him, but had little sparkle. Clad entirely in black he portrayed the mythological Icarus` fate. Flaying higher and higher the Greek finally came so close to the sun that the wax, which held his wings’ feathers together, melted and he fell to his death. Was this Malakhov’s self-reflexive résumé? Or a self-dramatization of the kind of “Look, I’m the battle-weary brave, who gave everything for the good, beautiful and true”? At least the playbill’s cover photo comes across like this.

Malakhov was by far his best in the final “The old man and me”, Hans van Manen’s humorous and melancholic miniature from 1996 about a couple, which, stricken by life, tries to get together again. Both fail at the end though sunny Beatrice Knop deployed all her arts of seduction. Sparkling of esprit she kept her chin up even when Malakhov, being completely in the doldrums, at first made no pretense of not being absolutely bothered. But in contrast to being the poet, the swan or – like in former times – the prince, this was a piece, in which Malakhov kept his dignity and the only one after which he seemed to unwind at the curtain calls and smiled for the first time.

While Lacarra and Dino in “Light Rain” – a choreography by Gerald Arpino that radiates precisely calculated eroticism – made a feature of Lacarra’s flexibility and overexpansions, their black pas de deux from John Neumeier’s “Lady of the Camellias” was the first half’s program highlight. A svelte and

expressive ballerina, Lacarra yet overdid the coughing and acting. Less would be more! However both touchingly conveyed their emotional turmoil and even in this short excerpt managed to evoke a dramatic atmosphere. This unfortunately burst like a bubble when the curtain went up for the subsequent “Don Quixote” pas de deux. After just embarking on a touching story, it felt as if a bucket of cold water had been poured over one’s head. Stringing together snippets of different ballets might work well for showy numbers, which were amply represented in the gala, but it doesn’t justice to works with meaning and depth. So “Don Quixote” was a big bang. Iana Salenko as Kitri and Dinu Tamazlacaru as her Basilio self-assuredly paraded their faultless technique, including lengthy rock-sold balances. In terms of acrobatic circus feats they were only outstripped by Perren and Shemiunov’s “Spartacus” pas de deux, in which the indispensable one-handed lift is not to be missed. As less boastful showpieces, neither Perren’s and Shemiunov’s other contribution, Assaf Messerer’s choreography “Spring Waters”, nor the pas de deux of José Martinez’s “Delibes Suite”, danced by Ueno and Golding, had much chance to impress any further and on the whole were repetitive.

Golding also appeared with Ueno in Petipa’s Swan Lake adagio from the second act, which was fine except that their emotional connection didn’t clearly come through. Although a secure partner, Golding isn’t the subtlest actor.

In addition to “Leda and the Swan”, Roland Petit was represented with a second work, the male duet ‘Morel & St. Loup’ of “Les intermittences du cœur”. Rainer Krenstetter and Marian Walter as Morel and St. Loup showed off their physical beauty and spiced their interactions with homosexual eroticism but failed to create a powerful presence.

Mauro Bigonzetti’s “Duetto Inoffensivo” was the female duet counterpart in the second half, in which Elisa Carrillo Cabrera and Saidakova played mannish women. Consisting mainly of slow motion movements, synchronicity and repetitions, but lacking meaning, “Duetto Inoffensivo” was tedious and dragged on. What a waste of two extraordinary ballerinas’ talent! However, it was a pleasure to see Carrillo Cabrera together with Mikhail Kaniskin in David Dawsons’s “A Sweet Spell of Oblivion,” an expressive and physically powerful, yet harmonious duet, in which the energy’s flow was clearly visible. Both had something to say to each other. Persuasive also were Kent and Radetsky in Twyla Tharp’s ballroom homage ”Sinatra Suite”, whose slapstick-like allusions to a couple playing little power games was a perfect mood elevator after the fallen “Icarus”. But unfortunately their softly undertoned pas de deux from Anthony Tudor’s “The Leaves are Fading” was drowned in the crush of all the other attention craving pas de deux.

Eric Gauitier’s funny choreography “Ballet 101”, a tongue-in-cheek demonstration of the – allegedly – 101 different positions, steps and jumps in ballet was presented sportily by Vladislav Marinov. A lecture, whose entertaining quality raised the house atmosphere to a soccer stadium level after Assaf Messerer’s pale and vacuous “Melody”. Except for Wieslaw Dudek, carrying around Yoshioka and her wafting veil, nothing remains imprinted in my memory of this interlude. And I thought yet again, how important, basically essential, it is to introduce and comment on the parts of a gala program as is regularly done at Hamburg Ballet’s galas. By providing a bit of additional information the audience not only becomes attuned to what’s to follow but their perspective about the pieces enlarges as well. However in Berlin the playbill offers few illuminating details. It’s a slender brochure consisting first of all of photos, showing Malakhov in various roles in former galas. So, above all, it is a commemorative picture book of his heydays. 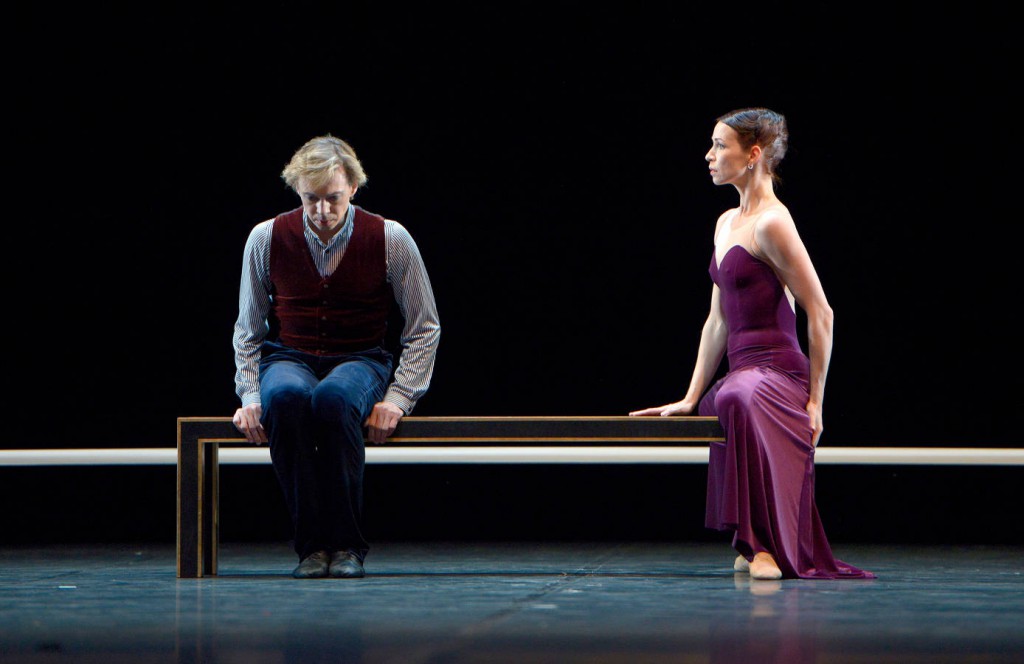