Limòn’s “The Moor’s Pavane” deals with the core plot of Shakespeare’s tragedy “Othello”. The four leading figures – Othello, Desdemona, Iago and Emilia – enact the story’s crucial moments in less than twenty minutes. It all starts with Othello giving the handkerchief to Desdemona. However, Limón does not label his characters with their original names from Shakespeare’s play. Rather he broadened the piece’s meaning to show basic emotions such as love, tenderness and abysmal malice, pride and destructive jealousy. “The Moor’s Pavane” was thought to be his comment on the intrigues, defamations and hysteria of America’s McCarthy era. Next to the Moore (Léonard Engel) there’s his wife (Séverine Ferrolier), his friend (Lukáš Slavický) and the friend’s wife (Emma Barrowman). The pavane – a processional popular with 16th and 17th century aristocrats – has a strict formality that limits expressivity through movement. Center stage, as hub, was the quartet of characters. Everything started and ended with that quartet formation. The choreographic form as well as the costume design and light design – evoking an intimate play’s atmosphere – were inspired by Renaissance architecture and painting. Velvet fabrics and unicolor dresses sumptuously billowing, yet heavy, and floor-length made for the piece’s weightiness and grounding which was palpable as soon as the curtain rose. The music of Henry Purcell (“The Gordian Knot Untied” and “Abdelazer or The Moor’s Revenge”) had been arranged by Simon Sadoff.

Ferrollier portrayed an innocent, pure and a bit pale Desdemona, while Barrowman’s blond-braided Emilia was obviously so naive not to know at the end how things had happened and what part she had played in the disaster. In Slavický’s characterization of Iago I missed a clear psychological profile. What had

stung him to intrigue remained vague. Because of the formal structure every step, gesture and glance is the condensate of strong emotions and thus has highly concentrated meaning. Engel as ‘The Moor’, for example, desperately raised his arm when facing his murdered wife. He entirely fulfilled the form – dramatically splayed hands, horror in the face – but failed to give his acting powerful internal meaning. In fact the challenge would have been to focus the spectator’s attention like a zoom lens on each gesture what only works when being utmost present and thus expressive.

The playbill, actually almost a little book, provided by Bavarian State Ballet, proved to be a treasure chest for valuable background information and not only in the case of “The Moor’s Pavane”. Now previously unpublished notes on the characters, casting and scenes by Limón’s longtime assistant Sarah Stackhouse, who had been Munich’s répétiteur for “The Moor’s Pavane”, generously provide backstage insights.

“Choreartium” danced to Johannes Brahms’ Fourth Symphony, with which the evening closed, has a completely different, almost diametrically opposed, choreographic approach. Movements have to be fluid and without any breaks as if the dancers breathe the music. Being Massine’s second attempt to choreograph a symphony – his first had been “Les Présages” to Tchaikovsky’s Fifth Symphony also in 1933 – he intended to focus even more on an abstract interpretation. The premiere in London with the Ballets Russes de Monte Carlo caused a scandal: Symphonies were thought as autarkic, untouchable sanctuaries and thus were definitely taboo for any appropriation by dance! A collection of historical newspaper articles in the playbill, originally published in “The World of Music”, gives an idea of the heated and also polemical debate between Massine’s defender, music critic Ernest Newman, and others who considered the interpretation of a symphony through ballet as sacrilege. 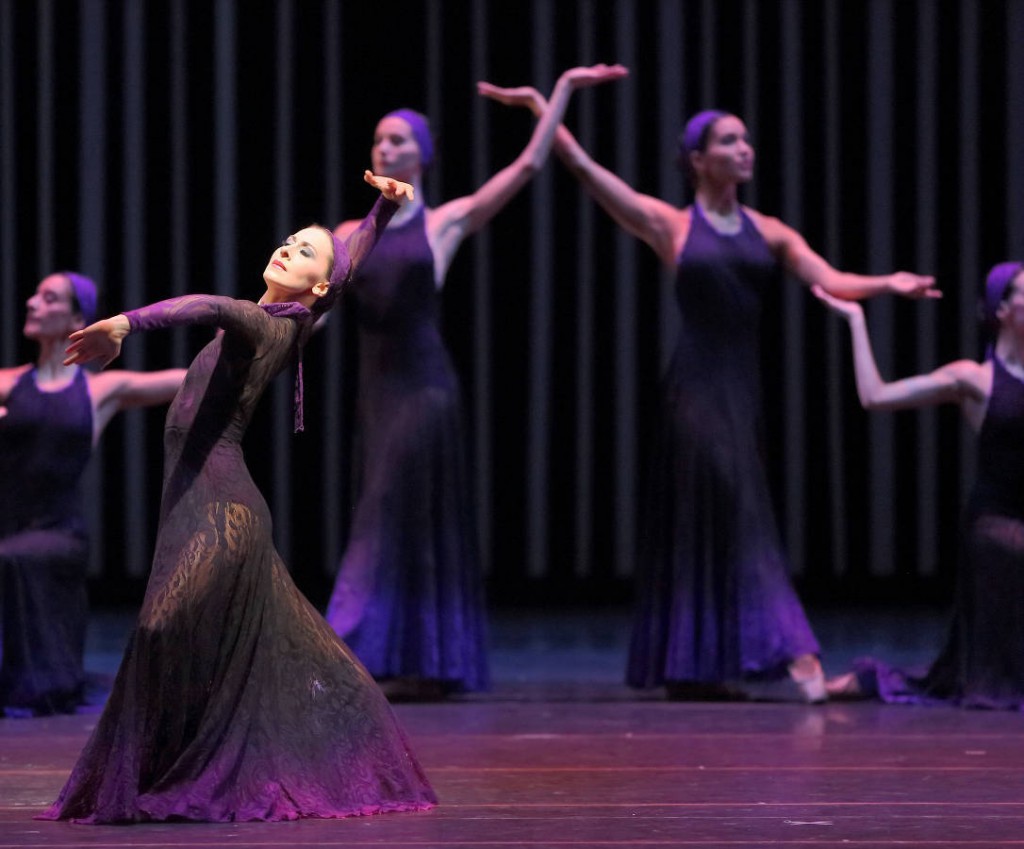 Ignoring bygone attitudes to morality and the loss of any complexion of its being revolutionary, I enjoyed “Choreartium” very much: The constantly varying structures in the buoyant first movement 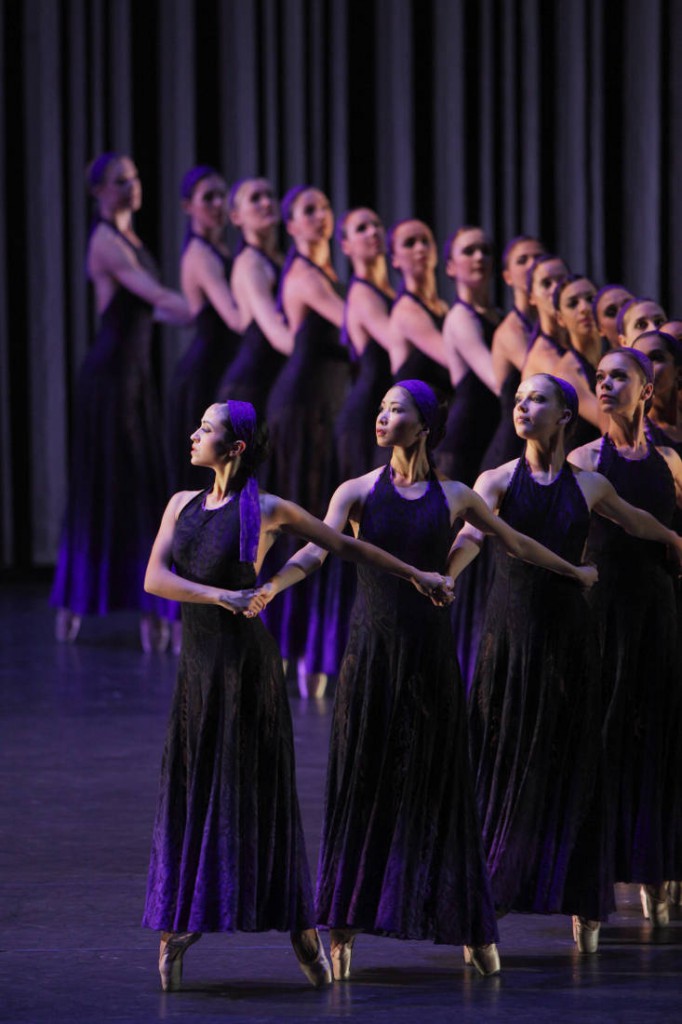 and the beautiful patterns of arm movements by the female corps in the second movement had a ceremonial atmosphere. The third movement was light-footed and sunny like a sorbet, yet also sophisticated due to elaborately patterned groupings. The gloomy fourth movement, which brought all dancers together again, marred my delight. Not strong jumpers, some of the men’s tour en l’airs went thoroughly wrong. Regardless of fluidity, clear shapes should have been carved out, but the men’s movements were rather blurred.

The fresh decor, commissioned by Dutchman Keso Dekker, was marvelous. He used white vertical blinds for the wings and as backdrop, which at times were partially bathed in an array of colors. The men wore skin-colored tricots and black tights with a lacy look, which shone like latex in the third and fourth movement. The women’s dresses were of the same fabric with added spots of colors: blue and mint green in the first quarter, supplemented with shades of orange and yellow in the third. Witty was the idea to introduce “Choreartium” on a video screen (title, choreographer and time of creation were displayed). All in all a highly successful transfer of a previous era’s gem to the present.