“Café Müller”, a 1978 production, depicts the encounters of six people in a somewhat shabby cafe, which is – like its guests – past its best years. The decor as well as the costumes are by Rolf Borzik. He lined several mirrors up along the side walls. A revolving door at the rear is the cafe’s main entrance. Wooden tables and chairs stand around in disorder and during the following three-quarters of an hour the café becomes even more messy.

The piece starts before one hardly notices. Standing in the dark at the side wall, Clémentine Deluy feels her way in the dark and, inevitably bumps into some chairs. Wearing a plain, white, floor-length dress and acting as if in a trance, she remains uninvolved almost to the end of the piece. With her eyes always closed, she doesn’t even seem to watch what goes on, unless as a mental observer. At least she is present. Formerly, Bausch used to dance this role. How fascinatingly intense she was! I remember her saying what a difference it would make whether she looked down or straight forward behind her closed eyelids.

Eventually the lights are switched on. There is music by Henry Purcell on occasion, issuing from a scratchy phonograph. The ambiance is melancholy.

The other five people in the café actively associate with each other, but all are rather strange. Asuza Seyama, also in a white dress, moves and dances like a sleepwalker. Her long, loose hair often covers her face. I kept wondering whether even she opens her eyes at all. In any event, she kept Jean-Laurent Sasportes busy. At first he seeks shelter from her uncontrolled movements behind some chairs. Later, he is concerned about getting the chairs out of her way. To the elderly Dominique Mercy, who has been cast in this role ever since 1978, Seyama had a very close connection. Both clung to each other as if they were one another’s life preservers. It was Michael Strecker’s job to position the pair’s arms and heads like moveable dolls and place Seyama into Mercy’s arms. She slid down and the procedure was repeated ten times or more at an ever faster tempo. When Strecker finally quit and walked off, Seyama jumped into Mercy’s arms, fell down, jumped again and so on. Mercy, stoop-shouldered and haggard, looked much too absentminded to take care of her or to carry her. At one point he and Seyama kept dashing each other to the wall, to one of the mirrors. Strecker also appeared briefly as a wearer of glasses. He scuttled about incessantly, like a nervous racehorse. As so often with Pina Bausch, one shouldn’t ponder too deeply into precise meanings. There was plenty of material to spin ones individual associations.

With its botched lives and aged protagonists who trickle along in an endless loop, “Café Müller” evoked a sad and depressing atmosphere, brightened somewhat only by Nazareth Panadero. She’s also one of the company’s veterans. With opulent, red, curly hair (a wig as it later turned out) and wearing a mellow mint green dress plus an oversize black coat, she pitter-pattered around relentlessly, either barefoot or in strawberry-red pumps.  She ran around like a flustered hen, not knowing what to do in view of the odd, screwy relationships all around her. Even so, she had two calm, concentrated solos. At the end, when it was dark again and things were almost imperceptible, Panadero put the black coat on Deluy and also the red wig.

The cast’s faces were serious during curtain calls. The dancers looked composed, but heavy-hearted. Seyama and Deluy seemed stuck still in their states of trance.

Of all productions of ”The Rite of Spring” I’ve seen up to now – be it Millicent Hodson’s and Kenneth Archer’s recon-struction or the versions of Neumeier, Tetley or recently Sasha Waltz – Bausch’s inter- pretation has struck me the most. I liked its genuine power and that it confronts life as being basic. Bausch’s “Sacre” avoids all artificiality. The stage is covered with soil (set and costumes by Rolf Borzik), the dancers, forcefully driven forward, don’t care about spots of dirt on their bodies and faces. Raw, elementary emotions like aggression, hostility, fear and lust break ground. Respecting gravity the dancers’ movements are strong and brusque. Bausch’s group arrangements are tension-packed – men versus women. The choreography unfolds an unmediated force. It’s a merciless and terrifying “Sacre”, but one of undeniable truth and for that very reason beautiful.

But, alas, however much the troupe, above all Chin-Yu Chi as The Chosen, tried to ignite the fire, matters didn’t really come to life. I’m not even sure if the dancers are to blame in any way. Sometimes rites work, sometimes they don’t, regardless of how much effort is expended. A spiritual fire has to start burning.

Unfortunately The Symphony Orchestra Wuppertal, conducted by Toshiyuki Kamioka, didn’t help much to fuel the ritual sacrifice. Starting decently, Stravinsky’s forceful rhythms were thrown out of joint in the second half. Had no one told Kamioka that not even in Stravinsky do cymbals need to cause ear-shattering shock?

Where is Tanztheater Wuppertal five years after Pina Bausch’s death? She had been the troupe’s core and driving force. On entering Wuppertal’s opera house one bumps first into a stall offering Pina Bausch books and posters. The audience sitting near me spoke reverently about ‘her’ pieces and when ‘she’ did them. Compare this with Stuttgart Ballet, for example, which has John Cranko at its heart. The Stuttgart is a most vivid company. It amalgamates looking forward with its vital history. I remember a comment by Vladimir Klos (one of Stuttgart Ballet’s former key dancers and now the associate artistic director of State Ballet Karlsruhe) at a panel discussion in celebration of the 50th birthday of Cranko’s “Romeo and Juliet” in late 2012. Klos spoke of Cranko’s spirit, which still would be present at Stuttgart’s opera house. He was right. In Wuppertal, however, Pina Busch’s spirit has gone.

To rely on one, strong leader and not establish a functioning team structure in which everyone has a certain degree of responsibility and self-reliance is something that works only as long as the leader functions. What if not? Lutz Förster, on board since 1975 and an outstanding dancer, took over as artistic director in 2013. The talk is of new pieces, but not until the 2015/16 season, if at all. Money is tight in Wuppertal, recently the opera dismissed all singers, dramaturgs and theater teachers. Freelancers are to replace them.  Innovation is needed to emerge from this financial squeeze. Instead, Tanztheater Wuppertal holds on to the past tenaciously. Making use of leftovers, the playbill offered for the current show was printed ten years ago and consists solely of old photos, except for one all black-white shot. No captions, no single article of commentary, no actual listing of the ensemble. By making a cult out of what has been, Tanztheater Wuppertal overcame the difficult time after Bausch’s sudden death. Currently, there is nothing fresh. Artistically that seems like death. 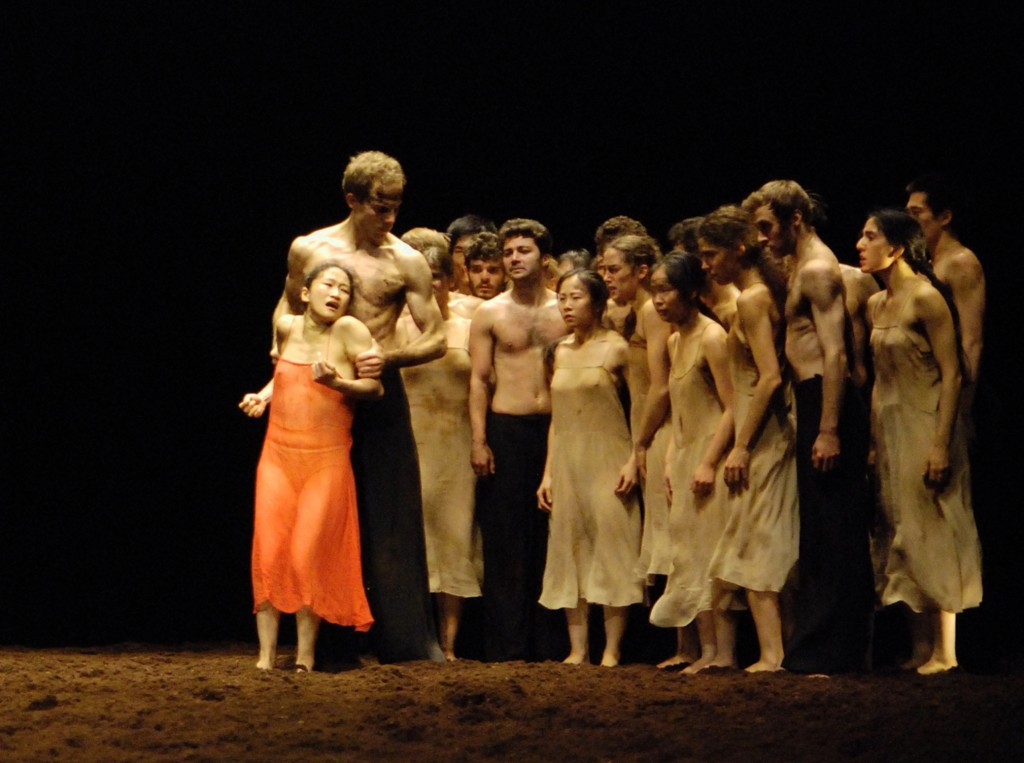