In Honor of Richard Strauss

Richard Strauss (1864 – 1949), the German composer and conductor, would have celebrated his 150th birthday this year. He was closely connected to Dresden, where nine of his fifteen operas had their world premieres. Thus it isn’t surprising that the Semperoper Dresden is celebrating this jubilee extensively with an array of operas, concerts, song recitals and the ballet evening “Legends – Homage to Richard Strauss”. The ballet program, based on Strauss music, includes two world premieres. For the first time, Alexei Ratmansky has created new choreography in Germany – the ensemble piece “Tanzsuite”, first on the program. The other premiere, “The Legend of Joseph”, is by Stijn Celis, a choreographer already familiar with the Semperoper’s dancers.

Richard Strauss and Alexei Ratmansky seem to share a trait: both are passionate about the past, about evoking history and reconfiguring it as contemporary art. One of Strauss’ historical sources of inspiration was the French rococo period. Its lightness and esprit found expression in Strauss’ creation “Ballroom and Theater Dances in the Style of Louis XV”, better known as the “Tanzsuite”, which premiered 1923 in Vienna. Strauss’ composition drew on a selection of François Couperin’s ‘Pièces de Clavecin’, pieces for the piano from the years 1713 – 1730, which Strauss adapted, rearranged and scored for small orchestra. The style of 20th century’s late romantic music was subtly woven into the rococo miniatures, which evoked a French court of the 18th century. In charge of the choreography for Vienna was Heinrich Kröller (1880 – 1930), a German ballet master and choreographer who worked first for Munich’s ‘Royal Court and National Theater’ and later for the Vienna State Opera. Playing with court dances and including mythological figures, Kröller enchanted his Viennese post-court audience with royal grandeur.

Ratmansky not only kept intact the shape and sequence of Strauss’ music – a divertissement consisting of pavane, courante, carillon, sarabande, gavotte, whirling dance, allemande and march – but also the sunny and jaunty atmosphere that

the Strauss reworking must have radiated. Elegantly dressed in ecru by costume designer Yumiko Takeshima – short ball dresses in silk satin for the women, and, in a more casual style, tights, shirts and simple jackets for the men – we saw a current assembly of ball attendees in the mood to party. Except for some mobile strip lights, the stage was totally devoid of props. This gave the rich and complex choreography utter priority. Ratmansky aptly amalgamated classical dance vocabulary and contemporary elements into a dynamically flowing succession of group dances, pas de deux and solos. Patterns varied constantly and surprised the beholders’ eye. Ratmansky’s wit, his sense of humor and his perfect timing convinced. “Tanzsuite” was refreshingly diverting, but not lightweight. Moreover, Ratmansky’s style of working fit the company like a glove. The dancing had a harmonious, natural, relaxed flow while being perfectly shaped. It sent out sparks of vitality. Bravo!

In 1912, Richard Strauss, at that time probably the world’s most famous composer, had come into the orbit of Diaghilev’s Ballets Russes. Planned was a ballet,“The Legend of Joseph”, with a libretto by Harry Kessler and Hugo von Hofmannsthal. It was to be a further vehicle for Vaslav Nijinsky’s ascent as choreographer.

Things happened differently. In 1913, following the scandalous Parisian premiere of “Le Sacre du Printemps”, Nijinsky married Romola de Pulszky and left the Ballet Russes. Fokine, after having angrily turned his back on Diahgilev, was won back to do the choreography. The premiere of “The Legend of Joseph”, in May 1914 at the Opera Garnier in Paris, was no success. However, it made an unknown eighteen-year-old famous: Léonide Massine, who would later replace Nijinsky in Diaghilev’s

intimate circle. Subsequently, other choreographers approached “The Legend of Joseph”, among them Kröller (see above), whose version, shown first in Berlin in 1921, was performed in Vienna from 1922 until 1944! Of special importance was John Neumeier’s interpretation, a story ballet that focused on dance rather than mime. Neumeier’s premiere in Vienna in 1977 was performed by the legendary trio of Kevin Haigen (Joseph), Judith Jamison (Potiphar’s Wife) and Karl Musil (The Angel). In 2008, Neumeier reworked the piece.

All this history must have been quite a background for the Belgian choreographer, Stijn Celis! How did he flesh out the biblical tale? Joseph’s story, which involves such themes as the abuse of power, seduction and vengeance, touches a metaphysical chord. It is even mentioned in the Koran and in ancient Egyptian papyri. In brief: Joseph is the first servant of the rich and powerful Potiphar in Egypt. Against all social conventions, Potiphar’s wife lusts after Joseph. But Joseph, faithful to God, rejects her. Mortified and full of revenge, she turns the tables on Joseph and accuses him of sexual assault. In the Bible, Joseph ends up in prison. Celis’ Joseph, like Fokine’s, is tortured until he finally reaches a state of epiphany. His belief in God is symbolized by a female angel.

Set designer Catherine Voeffray’s Egyptian palace radiates a chill atmosphere of power. White and light gray walls that can be shifted are deployed. Occasionally they serve as screens for black, brown and white flickering, reminiscent of television interference. Is this meant to indicate mental states, personal projections or subjective impressions? Some black, asymmetrical octahedrons with shiny surfaces are scattered around the stage and a huge one hangs high above the goings-on, casting dark shadows. It symbolizes the threat of power and the cold glint of wealth as it slowly rotates.
The object of desire, Joseph, was danced by Jiří

Bubeníček. His Joseph has an ambiguous character. He is modest when in company and humble towards Potiphar, but when alone he flirts with the idea of being powerful, but in fact is also amused by his own hubris. He’s likeable, natural, slightly narcissistic, but also in love with the world he lives in. At peace with the world and himself, he seems encapsulated in his own bubble, naively unaware of the looming dangers whose focal figure he’ll be. Yet a tiny little bit he also basks in the advances of Potiphar’s wife. Why else would he partner her so reliably in the pas de deux, offering support just a second in advance? A man who really doesn’t want to, would have left the bothersome dame flat.

Bubeníček is professional to the core, a seasoned actor, who knows how to shape a role. I liked the moments in which small cracks in Joseph’s public demeanor gave us a glance into deeper levels of his personality.

For example, the startling moment when he suddenly becomes aware that Potiphar’s wife is after him. How quickly he battened down the hatches inwardly! Bubeníček was taken by surprise a second time when Potiphar’s wife, full of sexual craving, ripped his shirt off and left him exposed. Bubeníček can master such fragile scenes that call for artistic honesty and authenticity. If only the choreography had given him more opportunities!

Courtney Richardson as Potiphar’s Wife was the one who cast the covetous eye on the handsome servant. (The photos show Svetlana Gileva as Potiphar’s wife.) Dressed in a golden gown, she radiated nothing but frustration, emotional frigidity and the eagerness to possess whatever she was in the mood for. Insensitive to Joseph’s refusal, she couldn’t stop throwing herself at him, apparently driven by uncontrollable lust. No sparks of affection or even of love came to light. At the end, when bending over the tortured and unconscious Joseph, she wasn’t chastened and rueful, but rather imagined that she had gained power over him. She hadn’t. Joseph danced a final pas de deux with her, but already being in the spiritual sphere, he considered Potiphar’s wife to be an angel. Elena Vostrotina was the true angel, a mild companion who bolstered up Joseph’s faith in God. She and Bubeníček mastered his final apotheosis without laying on pathos too thickly.

Potiphar (Milán Madar) was powerful in name only. Enduring his wife’s open rejection, he kept his composure but seemed helpless and defenseless: a pallid figure of a mighty man.

Sulamith, known from the Song of Solomon in the Old Testament, was bewigged like an Egyptian and danced in a sexy red bikini wafting a lemon yellow cape. In this role, Sangeun Lee attracted attention like a curious, colorful insect. Originally, though, wasn’t Sulamith supposed to be the embodiment of the love between

husband and wife or of that between God and his people and not a profligate seductress?

I’m at loss, moreover, in regard to two group scenes. One relates to the male corps wearing white shorts like fashionable boxers. Is there any connection between Joseph’s legend and group boxing? If Celis intended to depict the conflicts between Joseph and Potiphar’s wife and between her and Potiphar, he missed the boat. The only one kicking like a furious horse was Potiphar’s wife. The other scene I’m unable to understand consists of four ladies and five gentlemen in full formal wear. Top hats for the men, crinolines for the women, all in large black and white checks. On one occasion, they held up the black octahedrons meaningfully. How meager Celis’ ideas were for employing the corps reasonably became very evident when one compared his devices to Ratmansky’s choreographic abundance. Despite showy costumes and lighting effects, it is obvious that Celis skates on thin ice.

True pleasure could be obtained from the orchestra pit, where the highly-versed Paul Connelly and the ‘Sächsische Staatskapelle Dresden’ shone. Comments from several sides were: “If only we could hear such splendid quality elsewhere as well!” An intense dose of Richard Strauss will be offered during the Semperoper’s ‘Richard Strauss Days’ in November of this year. 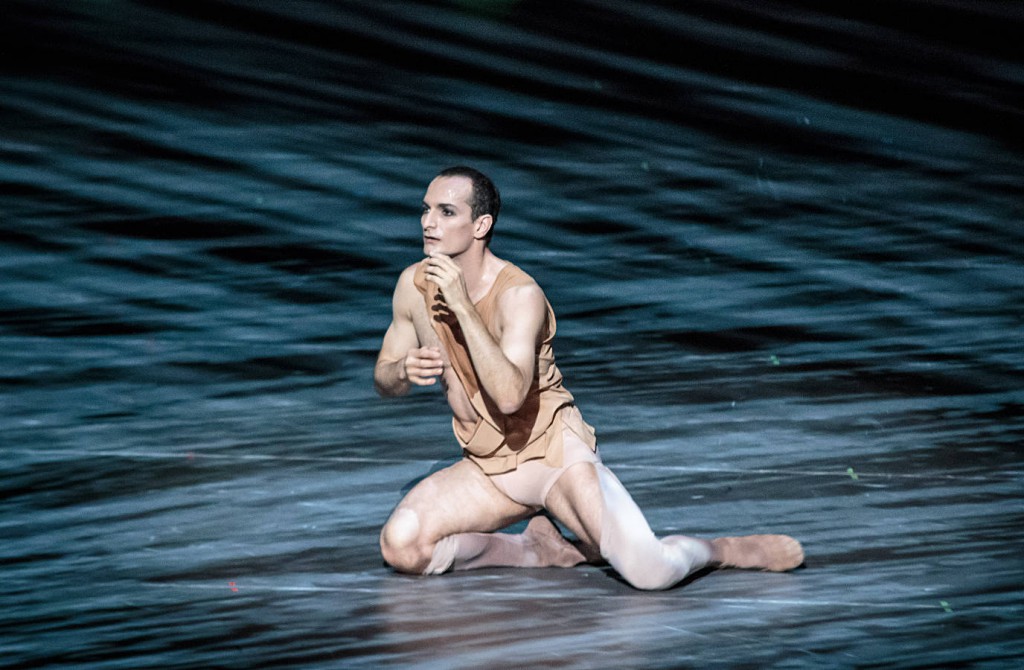