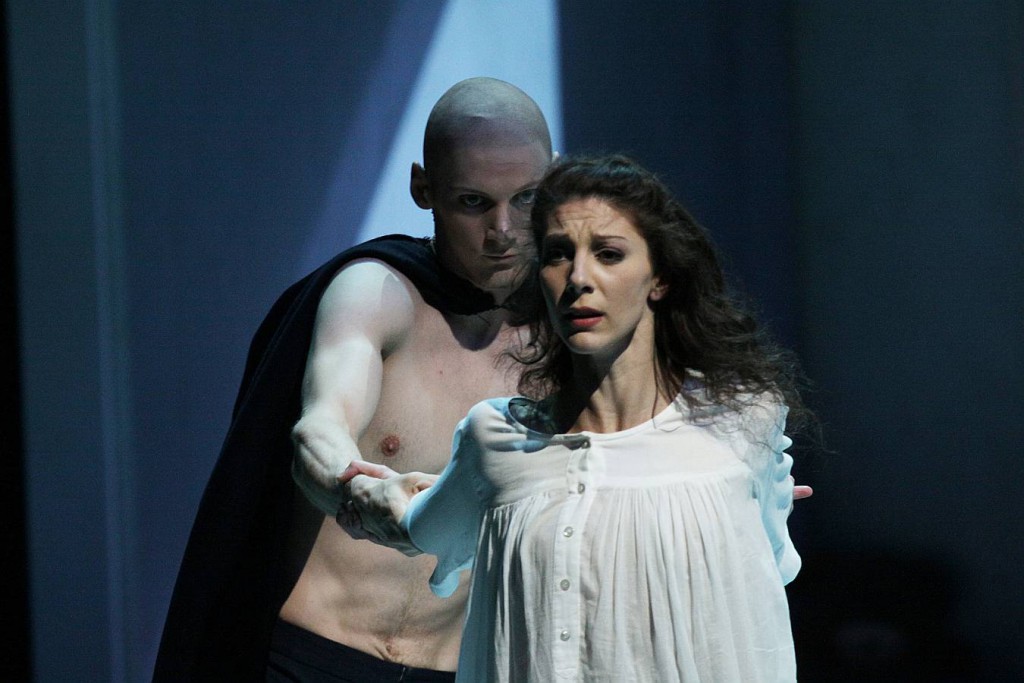 As main sources of inspiration, Neumeier cited productions of Tchaikovsky’s opera “Eugene Onegin”, especially a staging by Andrea Breth in Salzburg in 2007. Reusing Tchaikovsky’s music was out of the question for him, instead he commissioned the Russian-American Lera Auerbach to compose a brand-new score. After “Préludes CV” and “The Little Mermaid”, it’s the third time Auerbach has created music for a Neumeier piece. Like two conspirators, both didn’t talk of “Tatiana” but termed it “Project X” to avoid publicity, Auerbach’s score for full orchestra is brittle, tinged with melancholy and postmodern. Interwoven musical leitmotifs represent the different characters and situations. The atmosphere, ranging from stomping along to fragile to dying fiddle tones, is never truly buoyant but rather shaded by looming adversity. 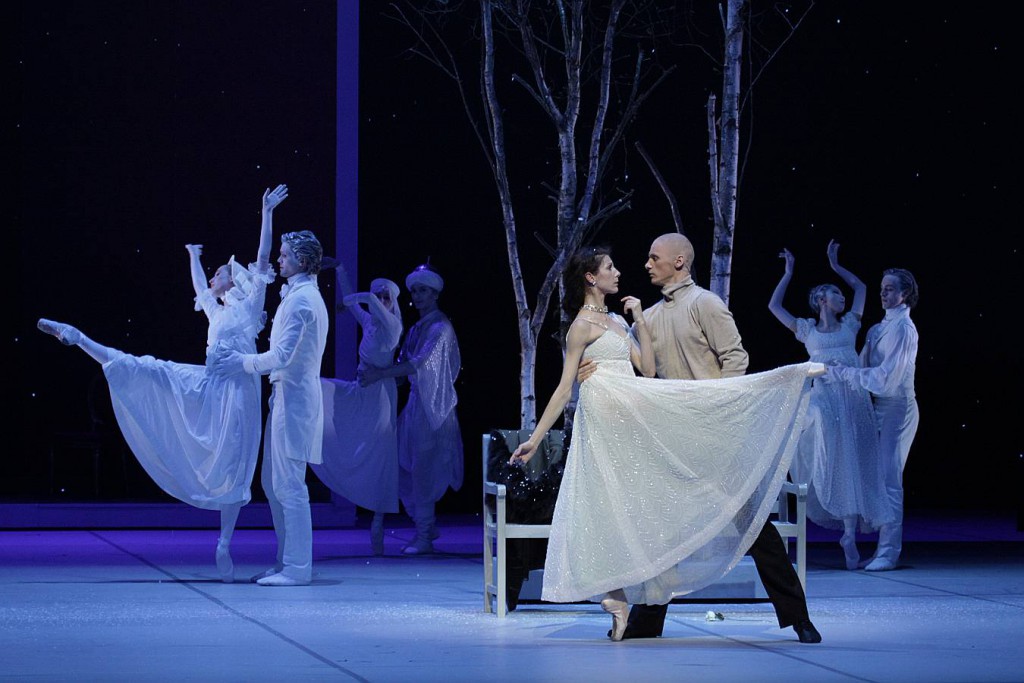 Neumeier, who loves to hold all reins, was in charge of the choreography and the staging as well as set design and the costumes.

Regardless of what finally was the decisive point for creating new choreography, there’s no avoiding a comparison of Neumeier’s and Cranko’s versions. While Cranko told the story in a linear manner, Neumeier let his preference for a complex, multilayerd narrative style blossom fully. Dreams, memories, presentiments and the real life 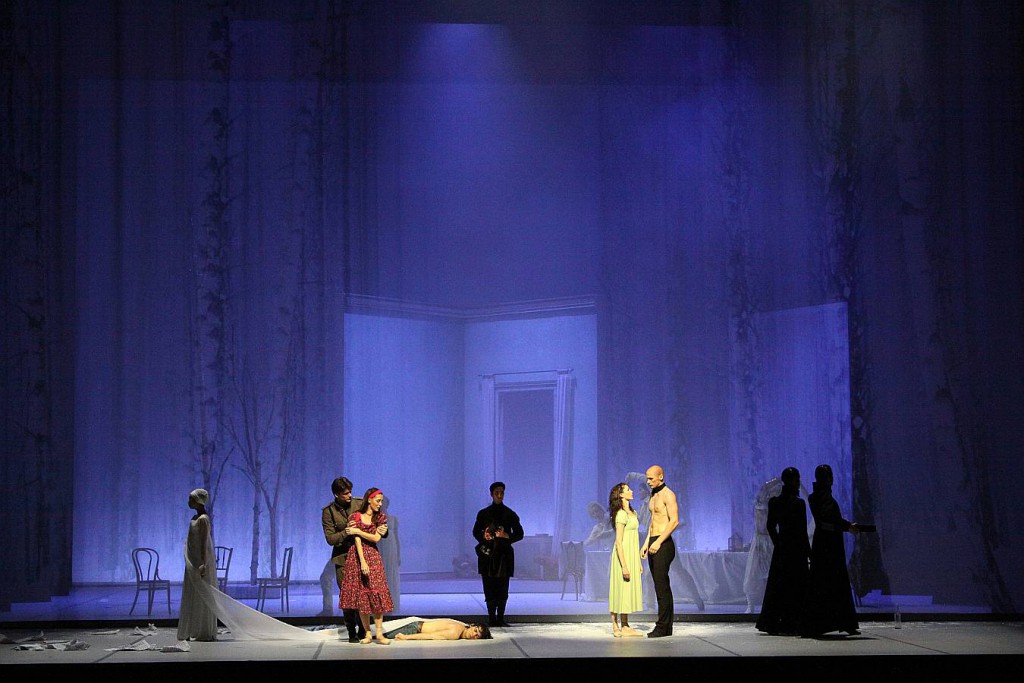 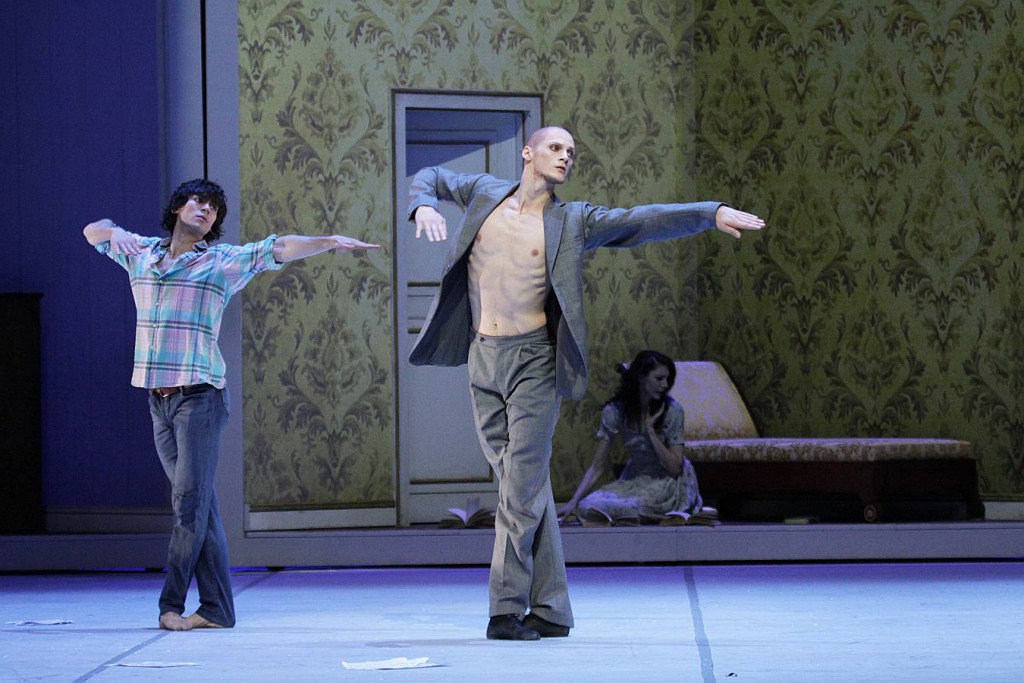 of the four leading characters – first of all of Tatiana and Onegin, but also of Lensky and Olga – were entangled for two acts in a course that zigzagged to challenge any viewer unfamiliar with Pushkin’s text. Additionally, Neumeier interlocks several historical periods. He focuses on Tatiana as the story’s true protagonist. Referring to Dostoyevsky, she’s stronger, more sensitive and has more depth and wisdom than Onegin. But, in fact, Onegin’s character, as one-dimensional as it may be, is also examined thoroughly. Moreover, Neumeier gives Onegin’s and Lensky’s friendship a stronger profile.

The prologue introduces Tatiana, Onegin and Lensky through insight into their dreams. As if peeping through keyholes, we behold a small revolving stage revealing key elements of the protagonists’ personalities. For the book-loving Tatiana it is a window – sitting at its sill she imagines her life as though its course will be that of a novel. The arrogant and conceited Onegin is symbolized by a bed, maybe to indicate that his life lacks any inner urge and that he has failed to tap his own true vitality. Lensky’s symbol is a piano; Neumeier turns him into a passionate, impulsive composer who gradually seems to become the creator of Auerbach’s score. A clever twist! 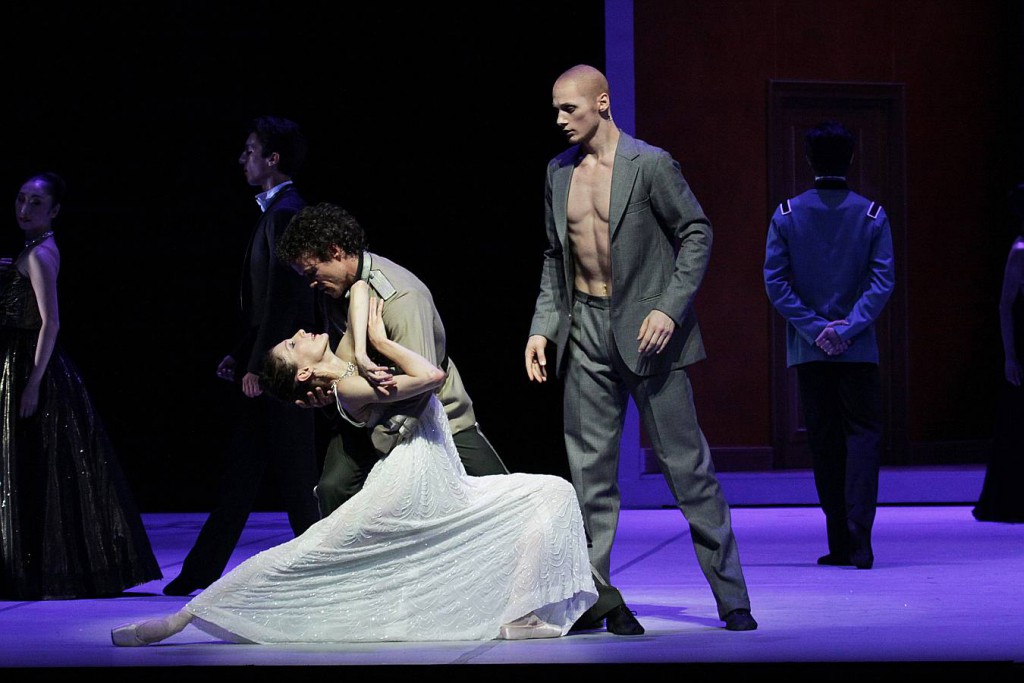 Seven scenes followed the prologue, including: Onegin’s and Lensky’s visit to Tatiana and Olga’s family, Tatiana writing the crucial love letter to Onegin, her dream of a bear and a pack of monsters led by Onegin, her name day on which the situation escalates, and finally ending with Onegin and Lensky’s duel. Two seconds entirely clad in black foreshadow the fatal conflict. The figures, carrying the case with the pistols, turn up repeatedly like leitmotifs. That memory of the fateful turning point in the life of the principal characters is never set to rest – 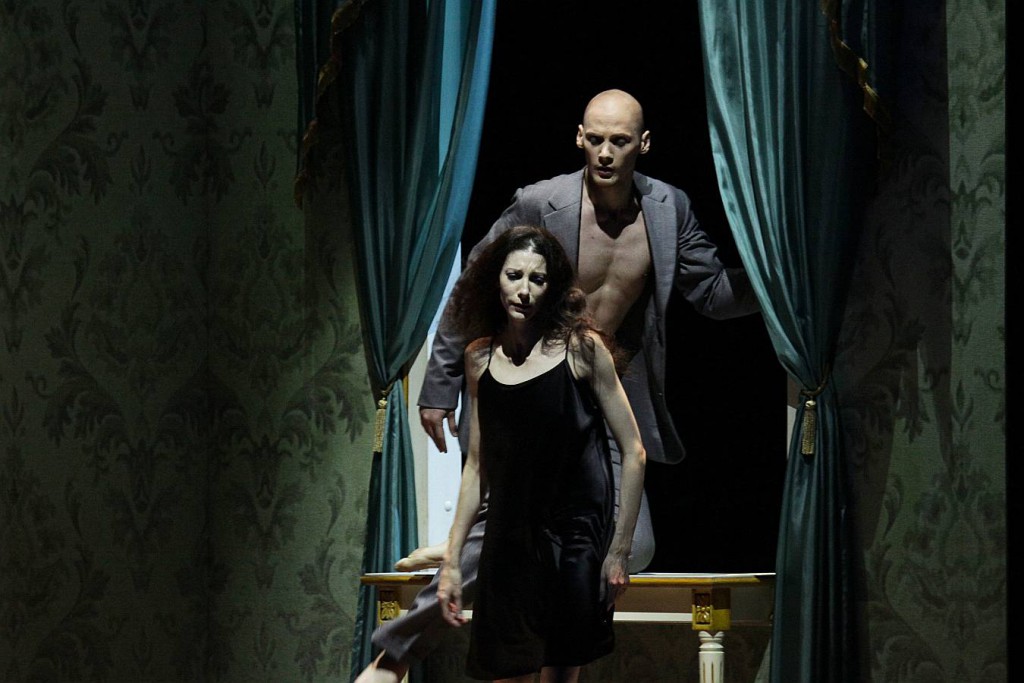 particularly for Onegin.
I was prompted to wonder, however, why Neumeier got lost in insignificant details that neither furthered the storyline nor illuminated additional facets. The scene ‘Onegin’s Day’ started with his looking through the invitations for the day. Later he met a chic lady in a park – it took at most one minute – attended a ball, rushed to the theater for the ballet “Cleopatra” and finally, back at home, received news of his uncle’s death. While Onegin was reading the obituary announcement, the uncle’s funeral procession passed across the stage for approximately ten seconds. That was only one of the first half’s seven scenes! Again and again set elements slid on and off the stage like trains in a switching yard, which led to nothing except hectic pacing. Who, if not Neumeier, would have the insight and skill to encapsulate Onegin’s way of living and his character in, at maximum, five minutes? Why waste time with fillers?

The second act consisted of only three scenes plus an interlude and was less crammed. Neumeier is known for digging deep into a story and character psychology, but this time he seemed to magnify details. Tatiana’s nurse Filipjevna, for example, 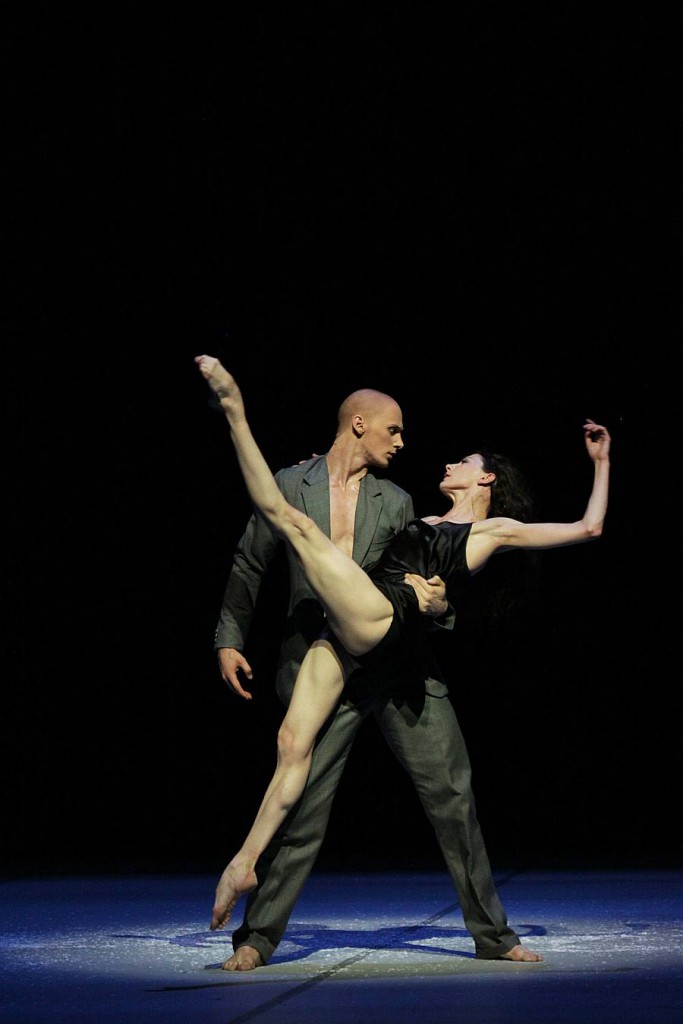 had two long pas de deux with her former charge. Other pas de deux, too, were overly long. The duel, about which Neumeier said in the playbill he couldn’t understand why Onegin actually shot and killed Lensky, felt as if it lasted at least ten minutes. Plenty of choreography – but not the most exciting – for an event whose outcome everyone knew well in advance! As with Pushkin, Neumeier’s way of telling the story meandered, but lost its narrative power on the way. Not even Tatiana’s and Onegin’s final encounter generated tension. In fact, several in the audience around me consulted their watches. In the ballet by Cranko, when Tatiana kicks out Onegin at the end, her face and posture tell everything: the whole spectrum of her emotional struggle and her personality’s tremendous strength are revealed. Instead, Neumeier showed Tatiana’s indecisiveness, her emotional back and forth but not her ultimate resistance to Onegin. Nor did her short nightie help to portray her as a woman of distinction. At the end, when sitting on the windowsill and contemplatively looking out, Tatiana reminded me more of the dreamy teenager she had been than of the mature women she was supposed to be.

Hélène Bouchet gave the role of Tatiana all her heart’s blood. Beautifully long-legged and an expressive dancer, she withdrew into herself and became enveloped in an aura of melancholy. I was surprised by Edvin Revazov’s interpretation of Onegin. His shaven head made him unfamiliarly exposed and emphasized his huge eyes’ coldness, disdain and at the end also hunger. Revazov seemed to have ascended to a higher level of clarity, dynamic and bite. Lensky, danced by Alexandr Trusch, was quite the opposite: impulsive, open-hearted and enraptured by his compositions and all the more by Olga. Leslie Heylmann was Lensky’s beloved one. Blessed with a sunny disposition, she quickly consoled herself by marrying an officer after Lensky’s death. Interestingly, Carsten Jung had two roles. In the first act he was the bear in Tatiana’s dream, in the second act Tatiana’s husband and safeguard, Prince N. 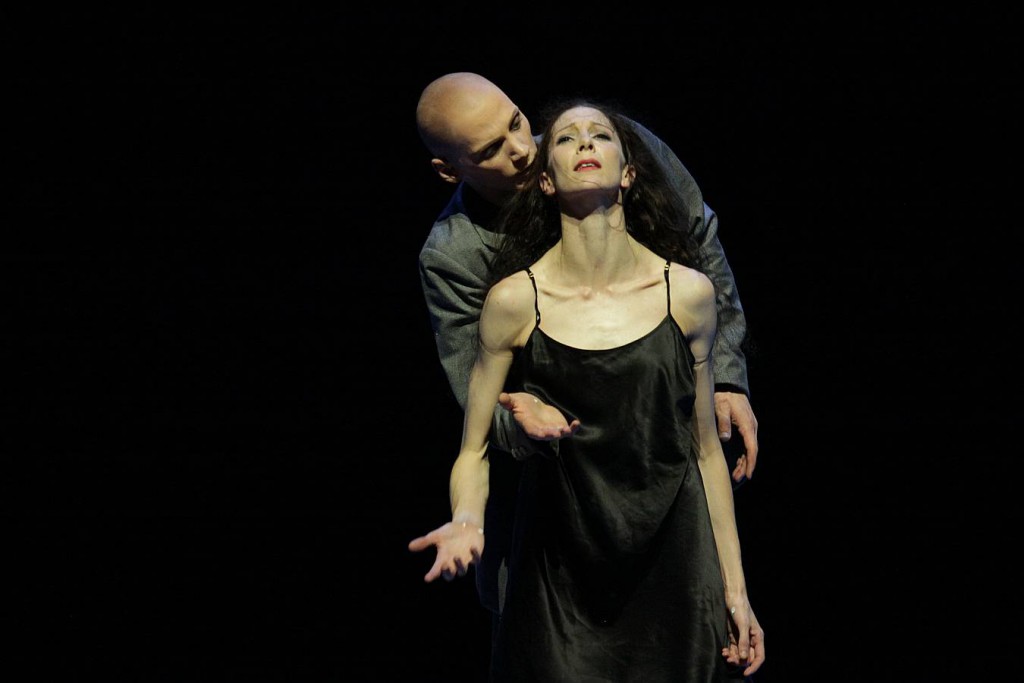 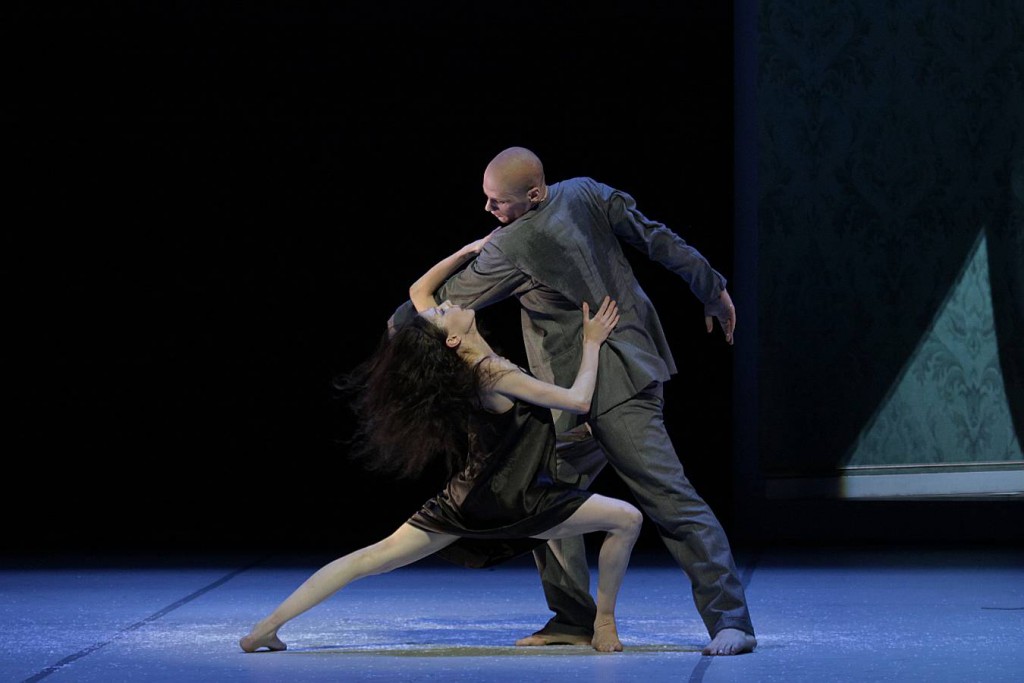 The bear was an ambiguous figure. While the young Tatiana loved her huge teddy bear with abandon, her dream bear – Carsten Jung – frightened her at first but after being wrapped in his fur coat she obviously felt protected.

Many of Neumeier’s ballets testify to his narrative brilliance, profundity and wit. This time it seemed as if he stretched his choreography until it was as flimsy as pancake batter. Why did he miss the opportunity to create a well-rounded, coherent ballet with an inherent arc of suspense? Neumeier’s comment on Auerbach’s music was that it turned out to be different from what he had expected. The opinion of both diverged on the subject. Neumeier had to use plenty of choreographic energy to counterbalance the score. It’s unlikely that Neumeier’s power in creating ballets has faded with the years, he’s an old hand at staging. Might it be that Neumeier and Auerbach pulled the rope in different directions instead of joining forces? Maybe that was the snag. 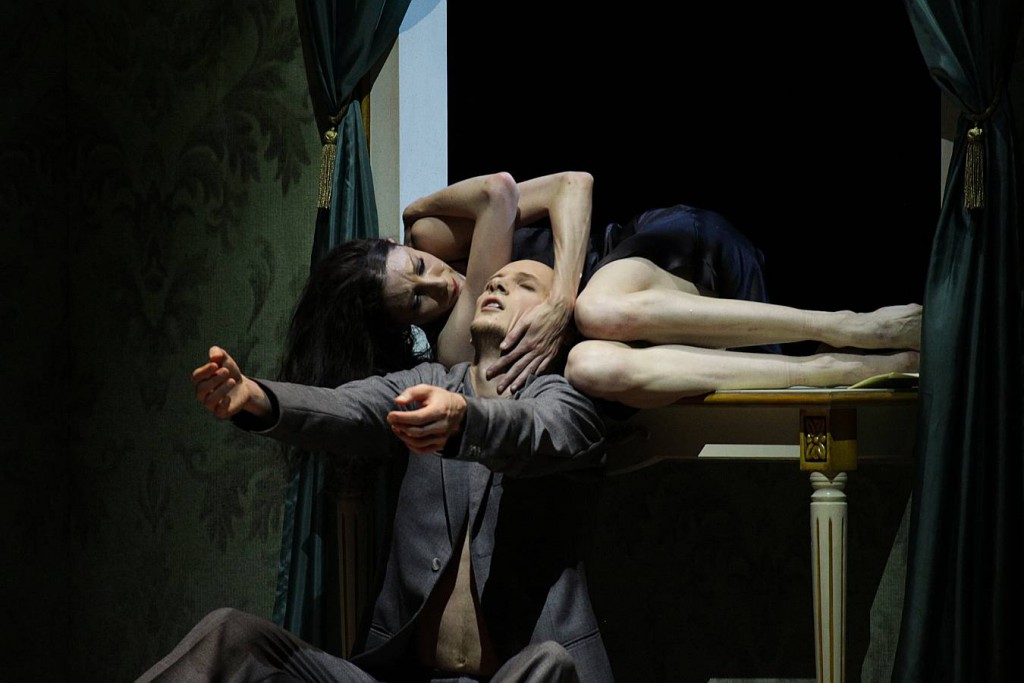