Where is the borderline between art and artificiality? Between fantasy and reality? Truth and falsehood? Such are Kyliàn’s questions behind “Bella Figura”. Also: at which point does a performance actually start? “Bella Figura” has no formal beginning. While the auditorium fills, the dancers warm up. They wear practice clothing and repeat step combinations. When the lights dim, the curtain shuts. With the start of the music – a collage of various Baroque composers plus a Renaissance-based suite by the contemporary American composer Lukas Foss – two dancers are in the spotlight: a section of the curtain, as large as a door, is left open on the right. It leaves room for a man in skin-colored undershorts (Maximilian Genov). Lying on the floor with bent legs up in the air, he reminds of an insect that accidentally has fallen on its back. To the left, Jenni Schäferhoff, bare-breasted and likewise in skin-colored undies, is wrapped into the curtain’s folds by invisible arms from behind. Repeatedly she walks, gesticulating to the forestage but – perhaps confronted with something daunting – backs away and again seeks shelter in the curtain’s embrace.

Although the costumes by Joke Visser range from red corsage tricots for the women to black pants and transparent black shirts for the men, bare upper bodies are characteristic for “Bella Figura”. Usually combined with floor-length, red skirts for both genders, they highlight the equality of man and woman. There’s a bit Yin in the Yang and vice versa, Kyliàn mentioned in an interview on “Bella Figura”, and ultimately there’s no difference between being male or female. Bare chests certainly add a heavy dose of eroticism and sensuality. Conveyed are beauty and aesthetics, but also shown especially is women’s vulnerability and the necessity of overcoming this feeling in

On several occasions Kyliàn uses the black curtain to frame a scene, block the view, to gradually minimize the space for the dancers or as a fabric to snuggle into. Set elements are sparse, in the beginning two full-size mannequins in acrylic glass boxes, one male the other female, hang down from the ceiling at each side of the stage. Later, two fires burn in bowls on high racks in the corners. Dances are fluent with elegantly sweeping arm movements and include all formats from solos to group dances. Often women seem to be moving sculptures as in the duet of Elena Vostrotina and Jenni Schäferhoff. After closing the curtain except for a small rectangle, the two kneel face-to-face and, without ever touching each other, act as if tenderly exploring the other’s naked torso. They shudder back out of arousal and, before vanishing behind each side of the curtain, strip down their skirts. Most memorable was the group of nine topless dancers, their red skirts gleaming in the spotlights while moving gracefully. Though some pas de deux depict

odd relationships – Duosi Zhu and Johannes Schmidt dancing like puppets; Ana Presta and Maximilian Genov unsuccessfully trying to alleviate the tensions in each other’s cramped shoulders – there was no storyline.
What about the fine line between art and artificiality? Several times it seemed to shift towards mannerism. The moment one strives to cut a fine figure (‘bella figura’), natural beauty is forfeited and replaced by unconvincing affectation. The atmosphere was deliberately dreamy, but it wasn’t a dream similar to the one Kyliàn described in the playbill; “Imagine you had a dream during which you fell out of your bed. When waking up in the morning you notice that you’ve broken a rib.” I recall no trace of a likewise eventful and exciting dream happening to me this evening, but rather I felt slightly lulled.

In autumn 2012, when I last saw “Bella Figura”, the middle piece was an homage to Hans Werner Henze. This season David Dawson’s “The Grey Area” was sandwiched into the program instead. Unfortunately it delivered exactly what its title promised. The playbill indulged in motherhood statements, claiming that the piece is about ‘sounding the sheer incredible range of body movements’.

Though the five dancers – Chantelle Kerr, Anna Merkulova, Julia Weiss, István Simon and above all Christian Bauch – did their best, they barely breathed life into Dawson’s November gray. Dressed in simple, gray blue costumes designed by Yumiko Takeshima, the dancers nearly merged with the stage’s uniform gray light. Faced with a yawning void of stage space, lacking any set elements (according to Dawson in order to create “emotional space”), one was almost grateful for the women’s flimsy tops that wafted gently and flatteringly about their torsos’ silhouettes. Nor was the gloom helped by Niels Lanz’s monotonous, atmospheric sounds. Accompanied by more and more frequent thunderclaps, a theatrical climax seemed to be looming at one point, but except for increasing the noise level and a few wired up dancers running to the front of the stage and back, nothing happened. Perhaps the dynamic, elegant choreography might reveal its beauty if seen from up close. As seen from the gallery, it perished in insignificant uniformity.

It was up to Jón Vallejo’s solo during the second break and the final “Minus 16” brouhaha to reawaken the audience’s spirits. Actually the extra-solo during the break was and still is the evening’s real treat. I remember Jiří Bubeníček two years ago, who, being in peak form, visibly relished his solo and swept the patrons off their feet. Jón Vallejo, by contrast, was more restrained. A likeable charming fellow, he flirts and seduces with subtlety and a refreshing pinch of humor. He was rapt by a small bunch of red roses (a present from an admirer) until the end. Vallejo’s one-man-show was fittingly accompanied by schmaltzy Latino music in the manner of the old Mexican Bolero song, “You belong to my heart” (Ray Gilbert and Agustin Lara). Successively joined by other dancers, all equally dressed in dark suits, the group’s weird fidgeting and hip swinging caused amusement. Gradually the one-man-show turned into the beginning of Naharin’s “Minus 16”. One cannot expect ballet haute cuisine from the Israeli choreographer, who terms his dance vocabulary “Gaga”. The result is true to its name: To hammering sounds, the dancers crouch on chairs in a huge semicircle, exerting silly, repetitive movements. They join in loud singing and finally start to undress. Shoes are thrown into the center of the stage,

followed by jackets, trousers and the white shirts. At the end, the entire cast stands there in gray, fine ribbed underwear. The group acts forcefully, again and again pervaded by a wave of power which flows like a domino effect from body to body. Only the last one in the row, Francesco Pio Ricci, can’t absorb it. Completely exhausted he falls to the floor over and over again. Naharin also addresses borderlines: the fine line between madness and sanity, and that between exhaustion and elegance. Later on, after a calmer interlude, the dancers marched into the auditorium like a crowd of resolute cowboys to pick out members of the audience. My seat in the gallery turned out to be advantageously safe. Bringing the audience onstage is risky, but apparently all had fun or wanted to cut a fine figure – bella figura. No one was made to look like a fool. This fine line was definitely kept. Plenty of freaky jumping about and showing off, interspersed with a few Chopin sounds and ballet exercises – a remembrance of what’s the usual daily bread, or of the serious side of life? – concluded this show in the Semperoper. On the beautiful square in front of the operahouse, a bridal couple’s dance was being filmed – which brought me back to Kylián: performance never ends. 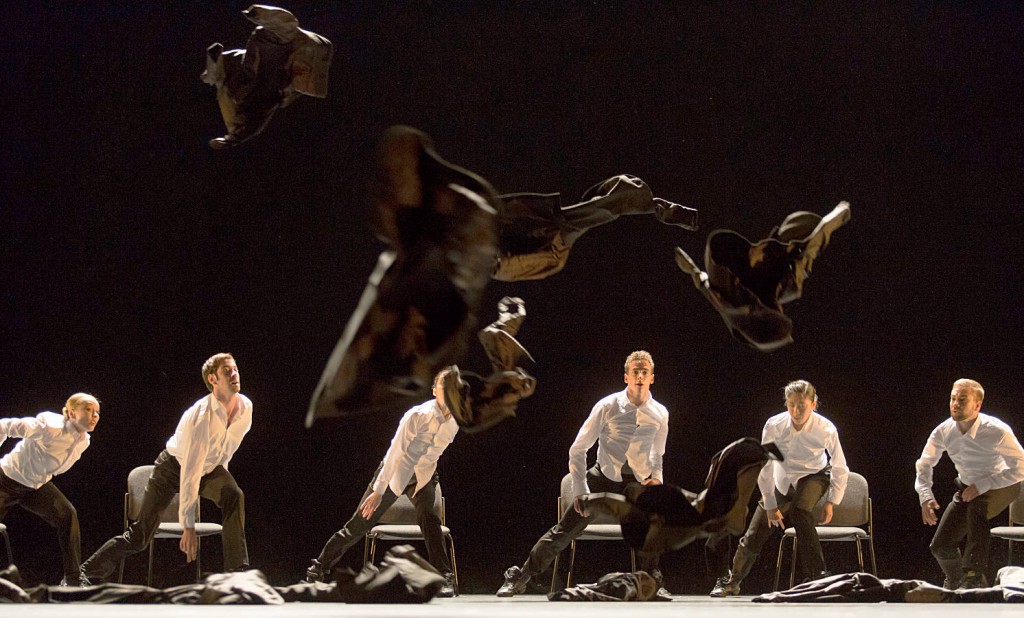