After returning home from performances in Copenhagen, Hamburg Ballet opened its season with John Neumeier’s “Giselle”. This paragon dance work of the Romantic period exists in quite a few versions, modern ones as well as those that try to be traditional. How did Neumeier, aiming to “provide this jewel of a classical-romantic ballet with a new, modern setting,” approach the tragic tale?

Neumeier first tackled “Giselle” in 1983. The current production dates back to a revision from the year 2000, a collaboration with Greek set designer Yannis Kokkos. The décor by Kokkos avoids stereotypes of 19th Century style. The first act is transferred to a timeless yard. Giselle’s crooked cottage on the left and the little shed on the right are cardboard-like facades, all in white. The contour of a distant castle is sketched roughly onto the backcloth. Plain, broad brushstrokes in brown, yellow and green color suggest autumn. The costumes of the villagers – grape pickers and peasants – are in the same range of colors: simple dresses in yellow, light blue, green and olive for the women; brown cord pants with suspenders or plain dark suits and white shirts for the men. Those in the Prince of Courland’s hunting party wear classic riding outfits: white pants, red jackets plus black riding boots and hats.

White brushstrokes on a black backcloth, also applied sketchily, suggest tree trunks in the second act. An artless wooden cross symbolizes Giselle’s grave. Later, a light-flooded gateway opens in the middle of the rear wall to serve Giselle and the Wilis on their way to the hereafter. Kokkos kept the Wilis’ white tutus at calf length, and they billowed beautifully. Although the white corsets the Wilis have are very elegant, combining them with black brassards for Myrtha, Zulma and Moyna emphasizes the dancers’ muscular upper bodies. Myrtha, especially, looked as if squeezed into her corset, which spoiled the impression of her as an airy spirit Queen.

Neumeier begins telling the story with a flashback by anticipating Giselle’s death. Right away we see her corpse on the ground, between her mother Berthe and the grieving Duke Albert. All that follows, however, is on the whole unchanged from the familiar course of events. The main modifications affect the characters of Berthe and Bathilde, and some of Albert’s movement vocabulary. Berthe has been mutated from a warmhearted, caring peasant mom into a lean, blind woman, who, vexed by terrible visions, scans the air with tensely stretched arms and hands. Her movements are angular and brusque; almost any change in her environment seems to upset her. With wide open eyes she unvaryingly stares into space, opening her mouth again and again. This is supposed to be silent screaming but instead looks as if she was having dental treatments.

A touching idea for the second act was to make Berthe, while clinging to the cross on Giselle’s grave, draw a chalk circle around the base of it. Later the circle becomes Albert’s safe zone. Miljana Vračarić was a Berthe with expressive force.
Bathilde (Emilie Mazoń), the Prince of Courland’s daughter and Albert’s fiancée, degenerated into a silly, little Miss. While the hunting party waited in front of Berthe’s cottage, obviously smug and bored, she annoyed her father (the distinguished, gray-haired Eduardo Bertini was the Prince of Courland) and also kept bothering her elderly governess (Ann Drower) with her teddy bear.

Mazoń had joined the company in 2013, when her mother (the ballerina emerita Gigi Hyatt) succeeded Marianne Kruuse as director of the Hamburg Ballet’s school. Nineteen-year-old Emilie was quickly entrusted with supporting roles, but at this performance she seemed taxed beyond her capabilities. She kept jumping around foolishly, acted like a spoiled, childish teenager and, when commanding Albert to kiss her beringed hand, displayed a proud smile of ownership. This characterization of Bathilde might have been intended as a source of amusement, but it rather endangered the story’s credibility. First of all, it’s absolutely unlikely that a young woman of outstanding human greatness, integrity and sensitivity like Giselle would develop any real sympathy for such a silly goose. The gulf between the two women was all the more apparent as Giselle was danced by the sublime Alina Cojocaru. A second reason is that when Albert, at the decisive moment, reveals he is engaged to this sort of girl and does not stick with Giselle, he is no longer worth shedding a tear over, let alone someone to die for.

The death scene is the last of Neumeier’s alterations that needs to be mentioned. Though Albert’s sword is part of his undoing, Giselle isn’t killed by a weapon. Lifted high in the air by the faithful Hilarion in the mad scene, Giselle becomes contorted, agonized. The instant of her death is indicated by the cottage’s and the shed’s facades crashing onto the floor.
No question but that Cojocaru is equipped with a heavenly, pristine technique. This technique, however, never appears to be the main thing. It becomes her tool to give her role’s character full expressive leeway. Cojocaru’s acting is natural, nuanced yet unadorned, and utterly captivating throughout. Charmingly modest – though of frail health – and radiating a winsome soulfulness, Cojocaru’s Giselle was the energetic center of the first act. Unable to bear the sight of Albert after his double-dealing was revealed, she turned away from him with aversion. She showed that something deep inside her had broken irreparably at that moment of betrayal and that there could be no point of return. Cojocaru pulled at my heartstrings!

In the second act, the white one, Cojocaru’s tenderness and feather-like weightlessness contrasted with her calm steadiness to protect the repentant Albert. Though not always in his immediate proximity, she enveloped him with her warm, caring love. What a dance partner for Alexandr Trusch! Considering that this newly-appointed principal dancer was performing Albert for the second time, he did very well. He is a likeable young man with a winning smile, a tidy technique and a promising acting talent. Even difficult lifts looked effortless. As Trusch’s self-assurance increased during the course of the evening, his partnering became quite smooth. With more experience and more power to stand his ground against Hilarion, Trusch will become an impressive Albert.

Tall Dario Franconi, wearing a three-day beard, was the sympathetic gamekeeper Hilarion. But he should intensify his disappointment and grief over Giselle and perk up his anger towards Albert. Franconi’s solo in the second act, when dancing himself to death, was perfection.

In the first part of the ballet, the corps de ballet exemplified what Neumeier had stated in the playbill: “Giselle is the exceptional one. (…) The others are totally normal. Indeed, they dance, but their dance is inspired by Giselle.” That by “ normal” is meant average to mediocre becomes all the more obvious as Kokkos’ minimalistic set places special emphasis on the dancers. While in Stuttgart Ballet’s “Giselle” the stage brims with vitality, the Hamburg ensemble seems to be dancing behind a scrim. Where are Hamburg Ballet’s up-and-coming talents? All seemed engaged yet failed to generate a truly festive mood or embody the liveliness of young people. Madoka Sugai’s and Kiran West’s peasant-pas de deux started in a lackluster manner, but gained momentum in their solos.

The Wilis, led by Hélène Bouchet as Myrtha, glided harmoniously through beautiful, geometrical patterns. The ghostly crowd’s shrill, scornful laughter over the dead Hilarion was ear-piercing. Hopping gleefully over his corpse, they vanished to seek their next victim. Bouchet’s entrance was gorgeous – covered by a gossamer black veil, she crossed the stage from side to side repeatedly – her dancing flawless. A rather waxy, set facial expression gave no clue to what was motivating her. She was, however, not merely vengeful. Mayo Arii and Leslie Heylmann danced Zulma and Monya – one of them allegedly had committed suicide by jumping off a cliff and the other died by drowning.

At the end, as a symbol of everlasting love, a red rose slipped from Cojocaru’s hand to that of the forsaken Trusch. It reminded me of the similar ending in Richard Strauss’ opera “Der Rosenkavalier”, and of the red rose that Count Paris lays on Juliet’s deathbed. Even the red, magic flower plucked by Puck came to mind. Too bad that Neumeier didn’t find a subtler symbol and one not so overused. 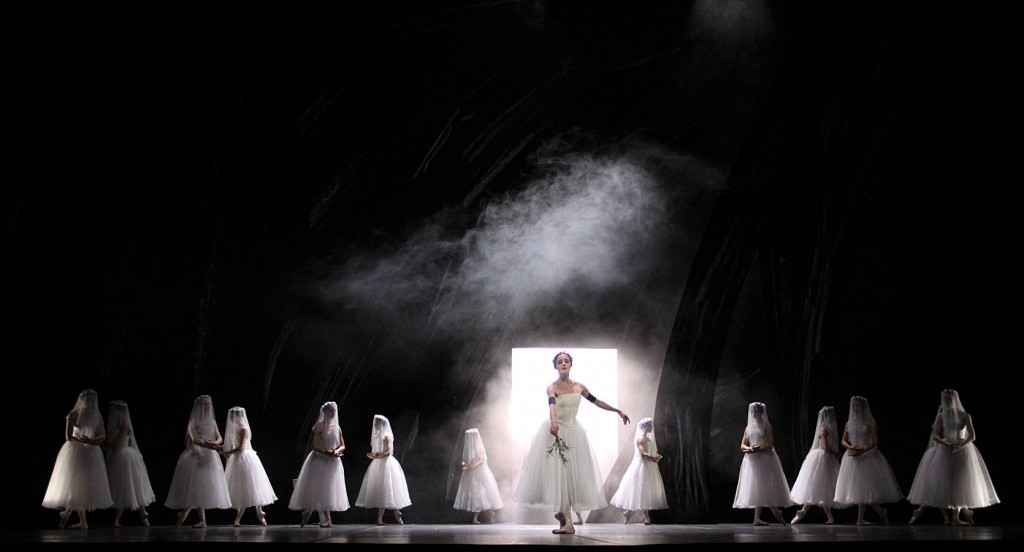