“Whose eyes saw the beauty is already entrusted to death,…”
August von Platen’s late-romantic song, written in 1825, is grounded on the medieval tale “Tristan and Isolde”. Transgressive love and love-death are core aspects of Richard Wagner’s eponymous opera and Thomas Mann’s novella “Death in Venice”, published in 1913. John Neumeier’s ballet version of Mann’s text pays homage to both monumental figures of the history of art. It wouldn’t be “made by John Neumeier”, however, if he hadn’t included additional historical references to broaden and enrich the total picture of the unique love story. He chose Johann Sebastian Bach’s “The Musical Offering” as music to depict the intellectual, well-organized world of Gustav von Aschenbach, alternating with piano pieces by Richard Wagner. The latter evoke the ecstatic, Dionysian counterworld Aschenbach gets into in Venice. Integrating music by Wagner moreover takes into account that many aspects of his autobiography, published in 1911, recur in Mann’s “Death in Venice”. Just as for Aschenbach, Venice was Wagner’s city of refuge. In 1848 he intended to finish his “Tristan” in the lagoon city where he also wanted respite from his broken marriage with Minna and his desperate love affair with Mathilde Wesendonck.

Neumeier turned the novella’s renowned author Aschenbach into a master choreographer, who’s busy with creating a ballet about Frederick the Great, who reigned over the Kingdom of Prussia (1740 – 1786). After Neumeier drafted the basic outline, he discovered that Bach composed his “Musical Offering” at the request of Frederick the Great on a subject predefined by the king. Neumeier wrote in the playbill that a shiver ran through him when he became aware of this connection.

Several levels of meaning – Aschenbach’s real life, his thoughts and emotions, his dreams, memories of his happy childhood, later on his delirium and hallucinations – are interwoven into a sophisticated storyline unfolding in two acts. The narrative style is complex, but develops organically and is always logically consistent. Deliberately crammed are Aschenbach’s choreographic attempts for his ballet on Frederick the Great. Fearing to not finish the piece he frantically constructs steps. Pure brainchilds, highly aesthetic but bloodless. Aschenbach is a meticulous worker, the epitome of self-discipline, who thinks he can hold the reigns tightly. But the stream of life causes his control to slip. Step by step he lets it happen. Inner as well as outward passages are fluent. For example, Aschenbach’s journey to Venice is ingeniously rendered by set designer Peter Schmidt. While Aschenbach is putting on his coat and hat on the left side of the stage, huge, moveable backdrop elements depict close-ups of the water surface. Two gondoliers ferry Aschenbach symbolically over to the Venice Lido, whose approach at the hazy horizon is heralded by a babel of voices slowly getting louder. Schmidt’s decor is timeless and reduced to the essentials. A beach chair and a tent-like beach house represent the Lido, a few black lines, downwardly terminating in little jags remind one of the threads of life which go off course and finally break. Aschenbach’s working and living environment in the first act is austere and clear, the only spot of color is a painting of Frederick the Great on an easel. The middle of the white back wall occasionally opens to reveal a smaller extra-room as if a door was opening into Aschenbach’s world of thought. The small room’s completely mirrored back deepens the stage visually. At first it looks spacious but also shows that Aschenbach is in fact trapped in his own mindset. He’s contemplating his own ego.

Neumeier integrates the sides of the proscenium stage for little byplays, has Aschenbach walk into the auditorium when being sick of his choreographing and includes pianist Elizabeth Cooper, who’s playing Wagner”s piano pieces onstage, into the action. Cooper, a charming elderly lady becomes the young Aschenbach’s piano teacher in a flashback. “Death in Venice” is an encompassing, elaborate ballet, just like the one we would expect to be created by Aschenbach. It remains an open question how strongly autobiographical aspects influenced Neumeier’s characterization of Aschenbach. According to his statements in the playbill, Aschenbach is thought of as a choreographer of the Serge Lifar-type.

Seasoned Lloyd Riggins has danced the noble, dignified master choreographer since the ballet’s premiere in 2003. He’s a captivatingly intense actor. His transition from a perfectionist gridlocked in accuracy to a man who’s handing himself over to love is fascinating. In the second act, still strictly hanging on to his daily routines, Riggins sits on a chair and reads the newspaper. When for the first time Tadzio (Alexandr Trusch) comes into his focus, the newspaper slips out of Riggins’ hands. As if a switch was flipped, the whole atmosphere changed. Suddenly vivid love became palpable.

Sleeping in his beach chair Aschenbach dreams of a sexual debauchery, depicted by the corps clad in tiger skin patterned trousers and tricots which sends him into rapture but also makes him feel ashamed and smirched. Increasingly caught up in the sensual orgy he abandons his artificial choreographic concepts, depicted by Silvia Azzoni and Alexandr Riabko, his classical ballerina “La Barbarina” (Leslie Heylmann) and also his final project, the ballet on Frederick the Great. Dario Franconi was a warm-hearted King Frederick, a figure searching for its creator who should call him back into being. Franconi didn’t rage against his disloyal choreographer but rather comforted him, enabling Aschenbach to let go of the unfinished work of art.

Venice’s unfamiliar environment captures Aschenbach completely. He’s intimidated yet attracted by the young boys’ easygoing liveliness when playing ball at the beach. Tadzio, one of them, basically is nothing special. For Neumeier he’s no real existing boy, but rather a mythological figure. Neither coquettish nor enticing, but simply natural he’s pure beauty for Aschenbach’s eyes, Trusch makes him a likeable, kind and naïve young man. If he senses something’s going on, it’s an intuition deeply hidden in his subconscious mind. Jaschu (Kiran West), Tadzio’s best friend, attracts much more attention. West was a jauntily charming golden boy, his dancing clear and crisp.

Women are rare in Aschenbach’s life. The three main female roles, supporting figures around him – his assistant, his mother and Tadzio’s mother – are all danced by the same ballerina, Laura Cazzaniga. Cazzaniga, one of the company’s ballet mistresses, is able to convey a moment’s essence by the tiniest movement or a single look. Staunch on the surface, she’s a caring member of Aschenbach’s staff. As his mother she radiates natural warmness and spontaneity. In one scene she stands with her son – the young Aschenbach was Konstantin Tselikov – in the warm summer rain. A negligible scene, but the sound of the raindrops slowly soaking the two had a pleasantly soothing effect. As Tadzio’s mother Cazzaniga was all elegance, a perfect, admired lady and model mother.

Several times Aschenbach is led into a new direction by two figures acting as heralds. Though one person would be sufficient the role is doubled and both dancers are clad identically, which intensifies their effect as odd, unreal figures. Originally the roles were danced by identical twins, the Czechs Otto and Jiří Bubeníček. Jiří left Hamburg Ballet to join Semperoper Ballet in 2006, while Otto still portrays one of the heralds. He was paired this time with Thomas Stuhrmann, who couldn’t match Otto’s iridescent versatility and richness of nuances. As wanderers both inspire Aschenbach to make a journey. He is ferried over to Venice by them in the guise of gondoliers. As two drunken, false lads they mock him at the Hôtel des Bains. Not much later Aschenbach will himself become a ridiculously made-up lad wearing a wig. As double Dionysus they induce a sensual bacchanalia that overwhelms and finally subdues Aschenbach. Already close to his end, as two hypocritical coiffeurs, they rejuvenate him into a fop. The situation escalates when corpses carried off by cholera and lying on long, white, gondola-like shrouds are pulled across the stage. Though the holidaying society is in high spirits and parties intensely, the two, now guitar-players, strike up the final dance of the dead.

Aschenbach dies to Wagner’s music for Isolde’s Love Death, which might give one reason to expect a melodramatic, morally questionable end. But watching how Riggins runs around with Trusch at the beach and how he falls down yet struggles back to his feet is utterly poignant. His desire finds salvation in a final embrace after all. Collapsing, Riggins’ facial features, still smeared with the leftovers of the coiffeurs’ makeup, slowly disintegrate. Yet his eyes seemed to sparkle with a transcendent fulfillment. 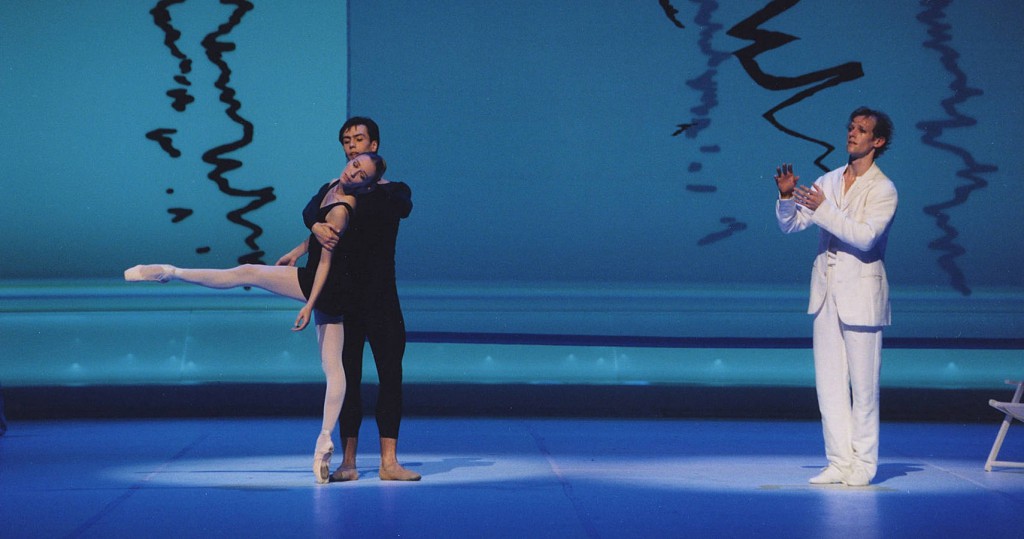