The Paragon of Perfection

“Of all set and costume designers he’s the only one not merely competent in all fields but ingenious,” Sir Peter Jonas states about Jürgen Rose. Rose would master everything, ballet – classical or modern – conceptual and decorative theater as well as dramatic and popular operas. “That’s one point. The other is much more important for professionals,” Jonas, said, “and like a gift from God: Rose doesn’t grow old fashioned. He has no expiration date.” Jonas, general director of the Bavarian State Opera from 1993 until 2006, highly appreciates Rose’s designs. He was by far not the only one! Rose was very much in demand, everyone wanted to work with him: Hans Lietzau, Rudolf Noelte, John Cranko, John Neumeier, Marcia Haydée, Dieter Dorn, Otto Schenk, August Everding – to name just a selection.
At age seventy-seven, Rose looks back on around 300 set and costume designs for operas, ballets and theater productions. He gained laurels as a stage director and, for a quarter of a century, inspired students of Stuttgart’s Academy of the Fine Arts in finding their own language as future stage designers. Earlier this year stage director Dieter Dorn and Jürgen Rose, a seasoned, longtime duo, welded together by more than twenty years of collaboration at Munich’s Kammerspiele, followed by eleven years at Munich’s Residenztheater, staged Richard Wagner’s “The Ring of the Nibelung” at the Grand Théâtre de Genève to acclaim. Professional to the core, Rose’s life was – and presumably still is – the stage. An outstanding figure of German culture!

Due to Sibylla Zehle, formerly editor of the Stuttgarter Zeitung and the newspaper ZEIT, and the generous support of Dr. h.c. Irène Lejeune, ambassadress of the Bavarian State Ballet, Rose’s memoirs were secured between the covers of a book. Simply titled “Jürgen Rose” the German Verlag für Moderne Kunst recently published a luxury volume in large format. Its seven chapters are entitled “In the Garden”, “Beginnings”, “Ballet”, “The Teacher”, “Theater”, “Opera” and “Wagner”.

Zehle draws a bow from Rose’s childhood to these days. Born to a family of large-scale farmers in the Magdeburg Börde in 1937, the young Rose spent his school time at the Odenwaldschule in Oberhammbach. Later he studied at Berlin’s Academy of the Arts. The twenty-two-year-old Rose was commissioned with the first designs for theater productions in Ulm by Kurt Hübner (1916 – 2007), one of the most important German general theater directors of the 60s and 70s. Two years later August Everding, director – later general director – of the Munich Kammerspiele, lured Rose away to the Bavarian capital. At the Kammerspiele Rose worked with stage director Rudolf Noelte (1921 – 2002) a fan of elaborate picture-frame stages, characterized by Rose as a meticulous and fastidious nag, but one he learned a lot from. After rehearsals Noelte used to send him letters of complaint, punch lists, personally typed: “The shoes weren’t dusty enough. Moreover they were carelessly soled with rubber – that hardly existed in 1880. – The leading actress’ hairdo was too tidy given the fact that she just got out of bed. The rouge on her cheeks was scandalously wrong! – You can’t be serious about the letter opener on the work desk. – And: The silver knife rests of the cutlery are missing.” And so on.

Later, Rose and Hans Lietzau (1913 – 1991) developed a new aesthetic, for example, open stages with full views up into the stage’s entrails like the firewall at the Residenztheater. A photo of Lietzau hangs next to Rose’s work desk in his art nouveau house in Munich. Above it hangs a photo of another important figure in Rose’s life, John Cranko, keeping his eye on Rose’s work. Both met accidentally in Stuttgart Theater’s canteen and, as the goddess of destiny seemed to have pulled her strings, they developed into an artistic dream team. Their first project, however, “Romeo and Juliet” in 1962, taught Rose a lesson.

Cranko had liked his spontaneous sketches for the design, but furiously tore apart his effortful, exactly constructed blueprints. He insisted on Rose’s initial sketches, on the crooked lines which, he said, Rose had to fight for to be taken seriously by the theaters’ workshops. That’s indeed what Rose did for the rest of his career. He could drive the dressmakers and painters – in fact the whole workshop staff – crazy, but, after learning that he was aiming for top quality, he became highly respected and everyone worked flat out. The longstanding costume designer of the Kammerspiele, Silvia Strathammer, knows no one else who works as intensively as Rose. He could be occupied with another topic in another town for weeks, she said, however, when coming back he remembered every little detail, every pleat he wanted to have exactly in this or that position. He has an elephant’s memory!

A dyed in the wool perfectionist he explodes or succumbs to desperation if the costume department or the theater workshop blunders or if a laboriously unearthed fabric was cut in the wrong way or a backdrop wasn’t painted to his specifications. With Rose there’s no botching. Never! For “The Flying Dutchman” at the Bayreuth Festival in 1990 he designed a flying Daland-house able to rotate in the air. Senta’s and the Dutchman’s souls dance; the lovers literally fly high in their few moments of happiness. To construct this house the Festspielhaus’ chief engineer even postponed his retirement.

Artists loved him and readily queued up for fittings. No one grumbled. Instead everyone wanted to have his or her turn, wanted Rose to pull a bit here or to jiggle a bit there. His taste is phenomenal! Who else has such an eye for colors and proportions? He knows precisely what sits well on each one.

For Rose the whole world is a prop room. He browses flea markets all over the world for treasures – fabrics, laces, camisoles, hats, shoes – storing former or to-be props in the attic of his Munich home. Downstairs he creates his stage models, format 1 : 25, populated with little, painted figurines, to outline scene per scene.

In any case “Romeo and Juliet” was a complete success. That in the premiere the balcony had been forgotten for the balcony scene and that it had to be noisily installed in the flickering spots of flashlights was absolutely negligible, though Rose wished the ground would open and swallow him up. Zehle’s writing is enlivened by such anecdotes, collected and arranged as if one was listening directly to Rose. Zehle is a rousing and brilliantly entertaining storyteller making one immediately sense how much heart’s blood Rose puts into what he’s doing. Easily getting carried away he rambles on, avidly followed by the reader. But a chronological list of Rose’s works would have been helpful to keep track of his abundant projects. Zehle calls to mind Stuttgart Ballet’s legendary success on its tour to the Metropolitan Opera House in 1969, which still gives one shivers; the sumptuous décor and costumes for Cranko’s “Poème de l’Extase”, inspired by Gustav Klimt; the porter of Vienna’s Hotel Sacher refusing to let Cranko enter the restaurant without a tie even if in the company of the revered “Herr Hofrat Rose”, or Alina Cojocaru flinging her arms around Rose’s neck after last year’s premiere of “Onegin” in London: “Jürgen, I love this dress!” She had danced the Tatiana role and wore a dress in the same brown-rose color Marcia had done forty-five years earlier in Stuttgart. Rose’s initial grumpiness – the Royal Opera House hadn’t get in touch with him when manufacturing the set and costumes anew – was immediately gone. He was tearful.

Collaborations with another ballet icon, John Neumeier, followed swiftly: Amongst others Rose created the designs for “Illusions – like Swan Lake”, “Nutcracker”, “A Midsummer Night’s Dream”, “Lady of the Camellias” produced in Stuttgart with Marcia as Marguerite – all much-loved staples since decades! Neumeier loved Rose’s opulence and his focus on details. The costumes for “Nutcracker”, Neumeier told, aren’t modeled after some mid-19th century ones but resemble exactly the style of

1864. Rose, however, indulged not only in lavishness but could reduce the designs as for Neumeier’s “Peer Gynt” or even more for “A Cinderella Story”. Playing in a tent-like light shaft, the 1992 “Cinderella” has a sparse, pure aesthetic – “pure enchantment” raved dance critic Horst Koegler back then.

After taking over the reigns of Stuttgart Ballet Marcia Haydée insisted on Rose as set and costume designer for her “Sleeping Beauty” (premiere 1987): “If I fail at least the design will be beautiful.” Naturally she didn’t fail at all! Stuttgart’s theater workshops ran at full speed. “Rose hastened through Stuttgart’s workshop departments like a tsunami”, she remembers. Parts of the rococo costumes were sewn by Munich Opera’s workshops and the costumes for the wedding celebration were commissioned directly from Cerratelli in Florence, who, back then, also worked for Visconti. Originally 700,000 German Marks had been scheduled, but the production cost 2,000,000 German Marks. A cost overun that would bring any controller into the arena. However considering that “Sleeping Beauty” has been revived again and again – next time in July 2015 – and that it still is beautiful to look at, still evoking oohs and aahs in the audience, it was definitely worth the effort.

Rose, thoroughly honest, unpretentious and authentic, doesn’t gloss over dark and difficult times either. When he was eight years old he witnessed US tanks moving in, shells hitting, sheds in flames, and cattle screaming in fear of death. Cranko’s sudden death in 1973 left him feeling guilty for years. Rose blamed himself for not having been present on the company’s fateful return flight from the tour to New York. Likewise critical was the time of his life partner’s fatal illness. Dieter Mellein died in 1997. Together they had renovated an isolated farm in Murnau/Upper Bavaria, whose gorgeous garden Mellein had laid out. Its seasons recall him, says Rose. The farm and the garden are Rose’s safe haven, his source of inspiration. Every thunder shower damaging the rose blossoms, or dry weather or too much rain disconsolates him.

Having made your mouth water for Rose’s biography I have to confess that there’s one little snag: Currently the book is only available in German. Yet it attracts due to an abundance of Rose’s sketches, paintings and, above all, marvelous photos of countless productions – black and white as well as colored ones. Portraits of John Cranko, for example, on one full-page image penetratingly looking at the reader. Or of Marcia during a fitting for “Lady of the Camellias” under the scrutinizing look of Neumeier and Ray Barra. The convertible back cloth for Cranko’s operetta “The Merry Widow”, seventy meters long and a feast of colors and patterns, is depicted on a foldout page. Also his last ballet, “Traces” (1973) addressing suppression in totalitarian regimes is shown. Born in South Africa Cranko hated any kind of restriction of freedom. “Traces”, confronting the horror of forced labor and Gulags, unsettled the Stuttgart audience. Though Marcia Haydée, Heinz Claus and Richard Cragun danced the leading roles the piece was booed.

Included are photos of Rose’s beautiful garden and of Castle Schachen, a remote hunting lodge of King Ludwig II near to Murnau, whose interior rather resembles a solitary theater stage. Rose loves to visit this place. Every year he looks out for the blue blossoms of the Himalaya poppy in the castle’s alpine meadows. As always it’s the exceptional and beautiful he seeks for. 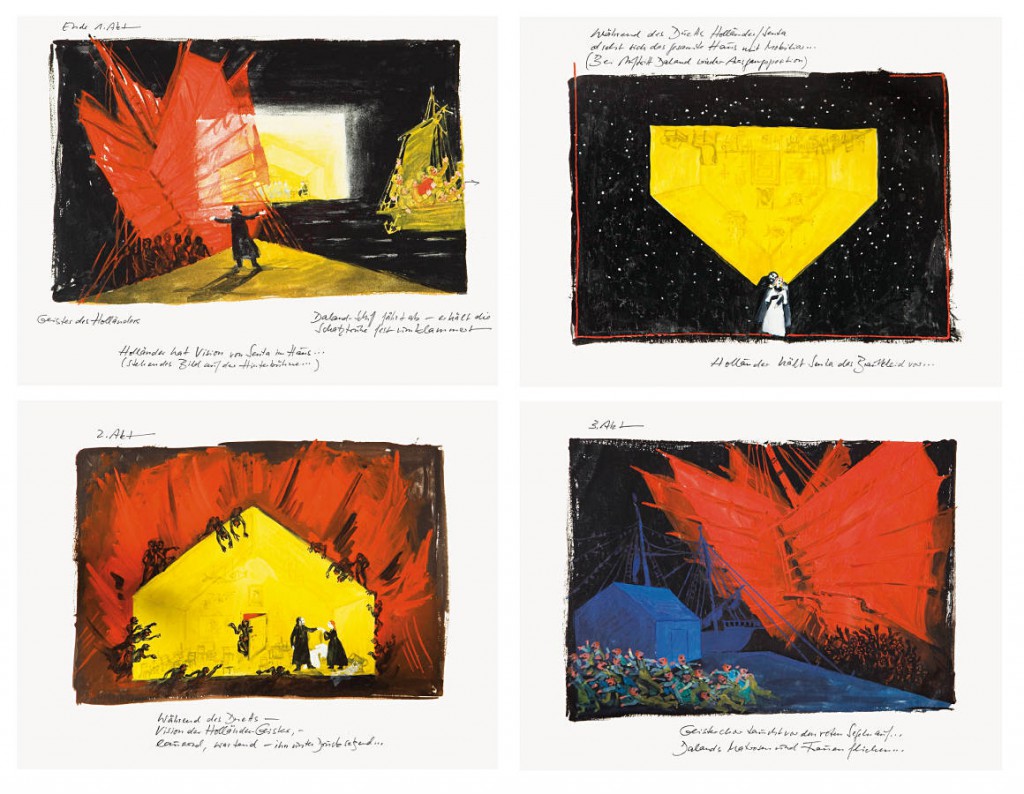