Kenneth MacMillan (1929 -1992) would have celebrated his 85th birthday in December 2014. Stuttgart Ballet used this date as an opportunity to bring its close connection to the choreographer to mind. The double bill “Hommage à MacMillan” comprises “Song of the Earth” and “Requiem”, ballets with a special genesis and both created for the Stuttgart company. I saw the last performance of the first run. A second will take place in April.
In 1963 MacMillan had already created “Las Hermanas” for Stuttgart Ballet. Back then John Cranko had been at the helm of the company for two years. In 1965 the Royal Opera House refused to give MacMillan, who was its resident choreographer, permission to use Gustav Mahler’s “The Song of the Earth” for a new piece. Mahler’s music was considered untouchable, definitely not made for dancing. Besides no one had ever dared airing such an unreasonable idea. Fortunately times have changed. John Neumeier, for example, choreographed pieces to all of Mahler’s symphonies, except the 2nd and 8th symphony. Currently he is preparing a new work to “The Song of the Earth” for the Paris Opera Ballet. In any case MacMillan found the doors opened by Cranko in the mid 60s. Both had met as teenagers when studying at the Sadler’s Wells Ballet School and became friends. Cranko was the one who encouraged MacMillan to start choreographing because the Scot, who was two years younger, was heavily afflicted by stage fright when performing.

“The Song of the Earth” comprises six songs alternately sung by two singers, Stefan Vinke (tenor) and Geam-Hwa Yang (mezzo-soprano) in Stuttgart. Basically the symphonic song cycle would have been Mahler’s 9th symphony. The title, however, was given only to the next work. This may be because a superstition circulated among some composers that, after accomplishing the ninth serially numbered piece of work, one would be too close to the otherworld. Ludwig van Beethoven, Antonín Dvořák and Anton Bruckner died after finishing their ninth and Mahler wasn’t able to finish his tenth as well.

For “The Song of the Earth” Mahler set seven poems of Hans Bethge’s “Die chinesische Flöte”, a volume of ancient Chinese poetry, to music. He didn’t refer to German translations of the Chinese original but to free adaptions of earlier translations in French and German. 1907-1908, the time the new composition originated, had been a difficult period in Mahler’s life. At age four his daughter Maria Anna died of diphtheria, while he himself suffered from severe heart disease. Moreover he faced an anti-Semitic campaign which led to his resignation as director of the Vienna State Opera. The time of crisis understandably found expression in his art. While up to then all compositions had emerged out of a feeling of vitality, now “The Song of the Earth” seemed to stem from a thoroughly altered composer. The six songs – “The Drinking Song of Earth’s Misery”, “The Lonely One in Autumn”, “Of Youth”, “Of Beauty”, “The Drunken Man in Spring” and “The Farewell” – address stages of life. Death is not the final condition. Instead it is followed by salvation. Mahler was fully aware of the piece’s basic downcast mood and wondered whether the audience would be able to bear it. “Won’t people go home and shoot themselves?” Nevertheless “The Song of the Earth” is ranked among the best of Mahler’s compositions.

MacMillan choreographed an ensemble piece which highlights symbolic figures in most of the six scenes. Individuality recedes to benefit a general view on the course of a lifetime. Though referring directly to the underlying poems, MacMillan didn’t retell each line of the verses on a one-to-one basis. He rather created a flow of ephemeral pictures and atmospheres carving out moments and periods in life which in everyday hustle and bustle often elapse without thinking. Being presented with this passing of a lifetime while unable to keep or regain any single moment and, worse, becoming aware of the inescapability of the end might be the reason for the piece’s gloomy atmosphere.
The meaning of some scenes became evident solely through dance. In “Of Beauty”, for example, the young men showed off their masculinity towards the girls who stood together in one corner pretending to be shy. Weaving around clearly defined the “Drunken Man in Spring”. One could also imagine chirping birds cautiously spreading their wings out of joy over the arrival of the spring. Or the excitement to embrace nature’s good gifts (The wine? Or maybe the mild spring air?) and the short moment of wonder about those gifts’ dimensions. But as the audience can hardly know the text of each song by heart, insight would have been enhanced if the singing had been clearer. Very often Yang’s parts were not audible. Hence much of the connection between choreography and text was lost.

Backdrop and costumes – plain tricots complemented by short skirts for the women – were in natural tones, either green, blue, light yellow or brown and rose-brown. Each scene was differently colored. One man (Friedemann Vogel) whose eyes were covered by a mask had special status. He was the perennial companion, the awareness of mortality (at London’s Royal Ballet the role was later named “Messenger of Death”), sometimes more involved, even the driving force of the happenings, sometimes only standing at the sidelines. Neither good nor bad his existence was merely a matter of fact. Vogel gave the Eternal One exactly the right amount of presence and strength. Having the final say he led one man (Roman Novitzky) to his death and hardly paused before carrying his female partner (Anna Osadcenko) into the afterlife as well. In the last scene the couple, walking on either side of Vogel, were reunited. All three gave strong performances. Especially Osadcenko’s sensitive restraint allowed the dance to reveal its deeper meaning.

Praised by the London critics John Percival and Andrew Porter as a masterstroke, “Song of the Earth” premiered at the Royal Ballet in 1966, a triumph for Cranko. One might have expected the Board of the Royal Ballet to learn from its error, but, no, it repeated its mistake. Three years after Cranko’s death, in 1976, MacMillan wanted to choreograph a memento mori, “Requiem”, for his friend to Gabriel Fauré’s music of the same name. Permission was withheld on the grounds that he might hurt the religious feelings of some people of the audience. In Stuttgart, however, where Marcia Haydée had taken over as artistic director, MacMillan was highly welcome. Six years later “Requiem” got standing ovations at its premiere at The Royal Ballet in London. It is an emotionally dense, yet overall peaceful and quiet work which derives its strength from MacMillan’s clear, pure style and his simple but haunting visual language. His sources of inspiration were pictures by the Englishman William Blake, a nature mystic who rendered his visions into paintings.

Clad in beige tricots only distinguishable by discreet black patterns (costumes by Yolanda Sonnabend) the ensemble formed a unified group. At first turning their grievances vehemently towards the heavens they were calmed by the appearance of an angel-like figure (Sue Jin Kang) whom they raised from within their midst. With Kang security, inner peace and confidence returned, a feeling of “things will go on” arose, but the path wasn’t easy. At one point a dancer, held at her legs, hung upside down. She looked powerless and exhausted. Again, Kang was the comforter, the source of energy from above, the protective entity. Daniel Camargo as a Christ like figure – very composed and modest – seemed to be the group’s quiet point of reference. Aware of the angel’s meaning, he was the main connecting link to the spiritual realm. It was a memorable moment when a symbolically spiritual ray of light shone in the group’s midst and wandered into the only piece of decor, a square pillar of glass blocks. It didn’t brightly illuminate the pillar from within but merged with its already existing glow inside.

Noticeably the dancers, aware of its weighty background, took the commemorative ritual seriously. Cranko is at the heart of the company and borne in vivid remembrance. How strong must the performance have been in 1976 when Marcia Haydée (as the angel figure), Birgit Keil, Egon Madsen and Richard Cragun mourned Cranko’s death! Back then there was not only one pillar on stage but an additional four symbolic ones.
Catriona Smith (soprano), Motti Kaston (baritone) and especially the Fauré Vocal Ensemble were excellent, the State Orchestra Stuttgart under the baton of James Tuggle in no way inferior. 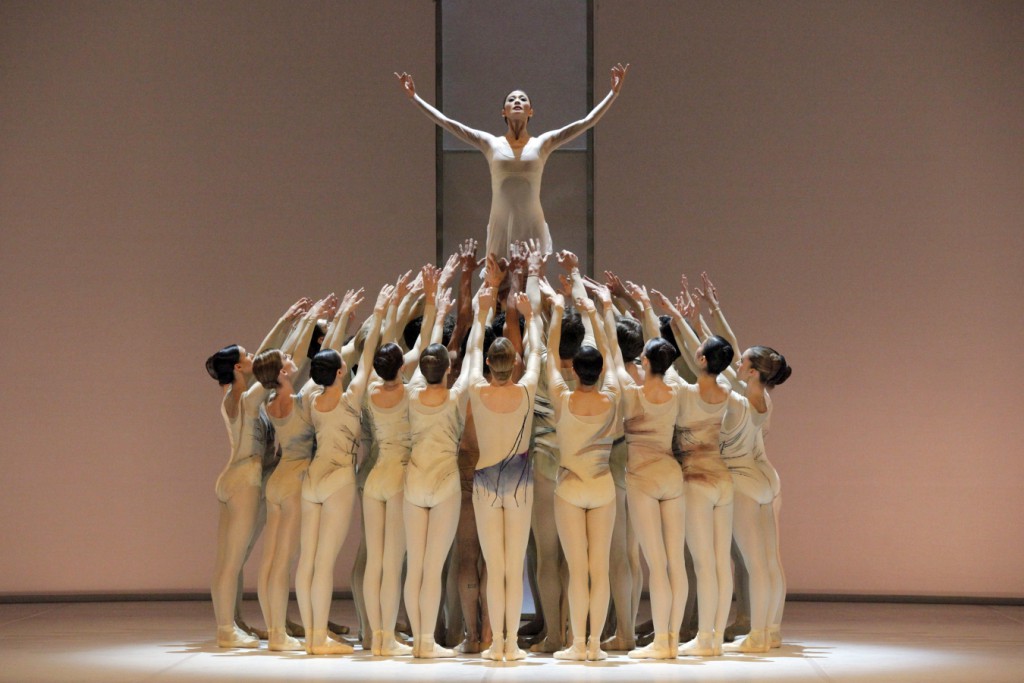