Emotions – that’s what it’s all about

One feels immediately comfortable at the Dutch National Opera & Ballet, Amsterdam’s principal opera house. Its spacious foyers are flooded with light provided by large windows which allow a panoramic view over the Amstel River. Terraces on various levels are favorite meeting spots of the audience. The house radiates the city’s atmosphere: Amsterdamers are open-minded, easy-going and kind. Special excitement and anticipation was in the air on April 10 at the premiere of John Neumeier’s “Lady of the Camellias”.

After “Sylvia” in 2011, it is the second piece by Neumeier that the company’s director Ted Brandsen has added to the repertory. Ballets by Hans van Manen, established as the company’s associate and resident choreographer for more than five decades, by Krzysztof Pastor and by David Dawson are the backbone of the schedules. Rudi van Dantzig (1933 – 2012), for twenty years at the helm of Dutch National Ballet, also left his mark as a choreographer.

For those used to a more abstract style, Neumeier’s emotionally charged “Lady of the Camellias” was a bold choice! The piece is based on Alexandre Dumas’ novel of the same name published in 1848. Center stage is the tragic love story of the courtesan Marguerite Gautier, the lady loving camellias, and the young Armand Duval, son of good family. Both fall in love with each other but the fragility of their love affair resonates subtly from the beginning: A magnetic beauty, Marguerite already suffers from the first symptoms of tuberculosis. Though still entangled in various advantageous liaisons – unavoidably or because of being too attracted to a luxurious lifestyle – she is ready to break with her main admirer, a wealthy duke. However, when confronted with the accusations of Armand’s father, who fears for his son’s honor by living with a prostitute, Marguerite, at first defying, then pleading, finally submits. Without informing Armand about the true reasons she leaves him hurriedly and returns to the duke and her former life. Deeply hurt Armand later takes revenge on Marguerite when both encounter each other at the park, flirting blatantly with Olympia, a pretty courtesan accompanying Marguerite. When Marguerite calls on Armand to beg not to be further compromised in public, the two spend their final night of love. But bothered by her promise to Monsieur Duval, Marguerite feels guilty, leaving Armand a second time. Beside himself, Armand humiliates her shortly afterwards at a ball, presenting her with a wad of money for “her services”. Marguerite, meanwhile severely ill, collapses. Physically a wreck she confines her emotions and thoughts to a diary destined for Armand. Both will never meet again as she dies.

Neumeier, known as a sophisticated storyteller, wove yet another thread into the already complex plot. He expanded an earlier love story which Dumas had already touched on: Manon Lescaut’s and Des Grieux’s unhappy affair depicted by the French author Abbé Prévost (1697 – 1763) in the short novel “Manon Lescaut” (1731). Facing a comparable fate, Neumeier mirrors Marguerite’s and Armand’s tragedy with the other couple’s.

Earlier Armand had given the book “Manon Lescaut” to Marguerite as a present. After her death he finds it again among her personal belongings that are to be auctioned. Marguerite had loved to go to the theater. The evening Armand had been introduced to her, she attended a performance of the ballet “Manon Lescaut”. Though rejecting Manon’s way of life, Marguerite strongly identifies with her herself. Manon enters her mind repeatedly, actually becoming the mirror image of Marguerite’s destiny. When going to the theater for the last time Marguerite can no longer distinguish between herself and the fallen woman on stage. Similarly, but less intensely, Armand sees himself mirrored in Des Grieux.
As in several other works Neumeier begins the story from its ending. The initial scene shows the auction of Marguerite’s household where Monsieur Duval and his completely distraught son accidentally meet. Armand, recalling the past, starts to tell his father about Marguerite. The lovers’ story thereupon unfolds on stage. Short episodes continually remind one that the events are told in hindsight: From time to time Monsieur Duval sits at the left corner of the forestage, watching, contemplating these. A placard announcing the auction – “16. Mars 1847” – is also on view a few times.

When choreographing “The Lady of the Camellias” in 1978 for Stuttgart Ballet, Neumeier mulled over the choice of music. His imagination was finally sparked by the conductor Gerhard Markson. When accidentally asked by Neumeier he suggested “Chopin or Berlioz – or both.” Neumeier opted for Chopin, who died in Paris in 1849, like Dumas’ Marguerite, suffering from tuberculosis – another cross-reference, another piece of jigsaw that ingeniously knits together “Lady of the Camellias”! In Amsterdam, Stuttgart Ballet’s musical director James Tuggle, already quite familiar with the score, took the baton to

guide four pianists and The Holland Symfonia (Het Balletorkest) through it.
From early on Neumeier intended to make a film of the ballet, which reached the screen in 1986. Marcia Haydée, on whom the role originally had been created, danced the Marguerite, Ivan Liška was Armand. Thus Neumeier’s stage concept uses cinematic techniques, for example cross-fades allowing easy shifts between the protagonists’ outer and inner world. Jürgen Rose was in charge of the set design and the costumes. While he stripped the stage down to the bare essentials, his lavish, gorgeous dresses make one swoon. Superb taste!

Several companies all over the world took “The Lady of the Camellias” into their repertory. Over the years many ballerinas tackled the role of Marguerite, perhaps taking their cue from Haydée. Dutch National Ballet’s Igone de Jongh masters the challenge with impressive confidence. Capricious in her first encounter with Armand in Paris, she reminds one of a proud Spaniard. Step by step, however, awareness looms. One can see it in her face. Towards the end of the first grand pas de deux, when Armand approaches her having fallen to his knees, she understands, at least for this moment, that he loves her. Her arms hang limp, all airs and graces being gone. During an outing into the countryside, while a group of young city people accompany Marguerite and Armand, de Jongh exudes sheer lightheartedness. Her love for Armand deepens, her genuineness grows, she seems rejuvenated yet matured at the same time. But Monsieur Duval’s appearance reveals the fragility of her bliss. The moment she sits in her white wicker chair, awaiting him, de Jongh makes me think of Haydée: a porcelain-like face framed by shiny black hair, her dark, big eyes revealing apprehension. Tightly gripped by him she soon looks as if he had broken her wings. Hollow-eyed, her cheeks sunken, she suddenly seems aged but fakes a happy smile towards Armand so as to not trouble him.

Shortly after being humiliated by him in the park, de Jongh, wearing a large, elegant hat, seems so delicate that the wind might blow her away, but she keeps her utmost composure. In her last – black – pas de deux with Armand this composure gives way to emotional turmoil. For de Jongh, technique is second, solely emotions matter. The story has reached its climax.

As Armand, Marijn Rademaker shines in every way. At Stuttgart Ballet, his home company until last season, he was deemed one of the best in this role. No longer awkward, now a man who boldly acts, he lays the world and himself at Marguerite’s feet with every gesture, every leap. Blonde Rademaker thrives

during the stay at the countryside, beams with happiness, is all coltish and unburdened. Watching his frenzied desperation after being abandoned gives one a lump in the throat, all the more as one witnesses in the background how Marguerite gives herself again to the duke. When flirting with Olympia to hurt Marguerite, Rademaker’s Armand looks visibly unwell. In the final pas de deux he has lost his initial naivety. He now bears emotional scars. Leaving the past behind and giving free rein again to his love and passion needs courage – Rademaker has it! His partnering is excellent; the intricate pas de deux with the many lifts work out flawlessly. From the initial moment when he sat opposite Marguerite in her boudoir, sparks flew. The chemistry between them is simply right.

Manon Lescaut and Des Grieux, the mirror images in the play-within-the-play, are danced by Maia Makhateli and Artur Shesterikov. Both also reflect the leading couple’s thoughts – especially Marguerite’s – in decisive moments, as when she decides to leave Armand again. Mikhateli aptly depicts the descent from being the coveted demimondaine, draped with jewelry, to a down-and-out, terminally ill woman. The role of De Grieux is less nuanced compared to that of Manon. Shesterikov portrays a loving, faithful companion, resigned to his sad fate as he carries the dead Manon in his arms at the end.

How the duke (Roman Artyushkin), a tall man with bland facial expressions, his mustache pitifully hanging down, can conquer a pretty woman at all can only be attributed to his wallet. His attractiveness rivals that of a cold fish. Count N. (Edo Wijnen), another suitor of Marguerite, is a much more agreeable character, but behaves in an infantile way. A greenhorn not to be taken seriously.
Erica Horwood is a coquettish Olympia, who, without a whiff of remorse, uses her charms to win over Armand. Every woman for herself! Why waste a thought about Marguerite? Olympia is a shallow person, yet basically good-natured. Prudence Duvernoy (Vera Tsyganova), also a young courtesan, is, by comparison, a sly old fox. Her cheeky solo during the trip in the country could be directly transferred to a Moulin Rouge revue! However, the man she teases, Gaston Rieux (Young Gyu Choi), is of the same caliber. Lasciviously swinging his pelvis and, macho-like, the riding whip he spices up the idyllic get-together of the young and beautiful. Casey Herd’s characterization of Monsieur Duval lacked subtlety. When demanding Marguerite leave Armand, Duval is not solely hidebound, tensely clinging to etiquette. He undergoes an internal struggle as well but tries to hide being touched by her. That should be more apparent.
The corps de ballet does well, although group dances in the countryside need to be a tiny bit more fluffy, like cherry blossoms swirling in balmy air. After some more performances, they will certainly be fully at ease with Neumeier’s style. 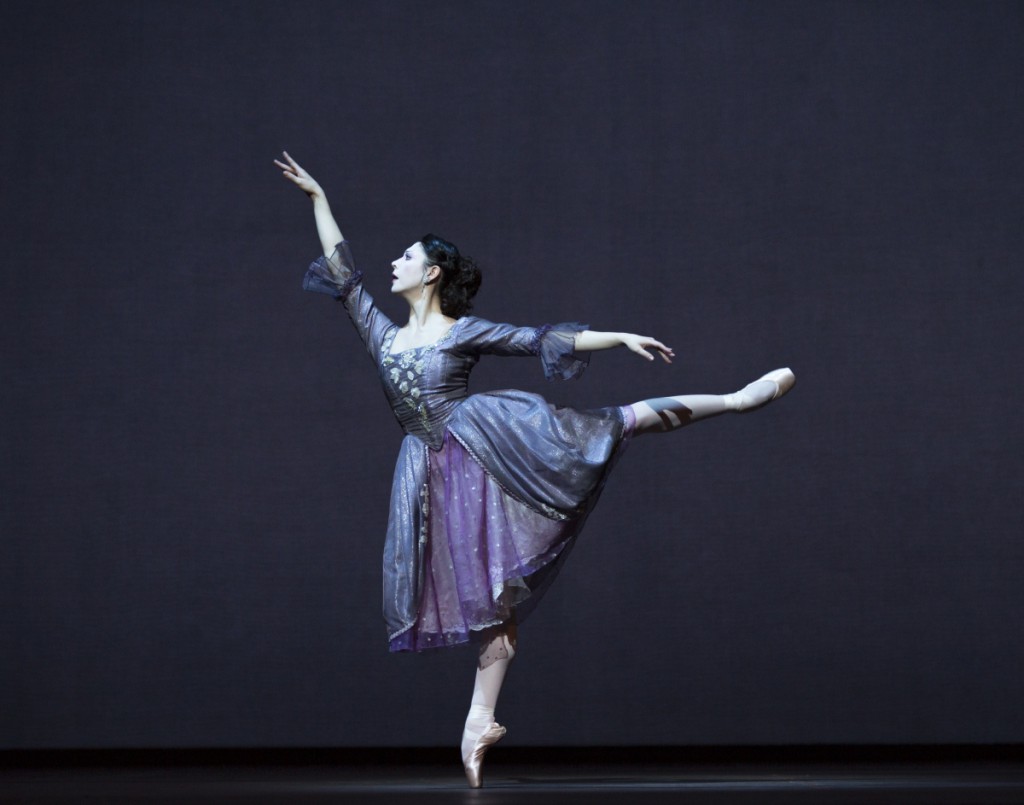