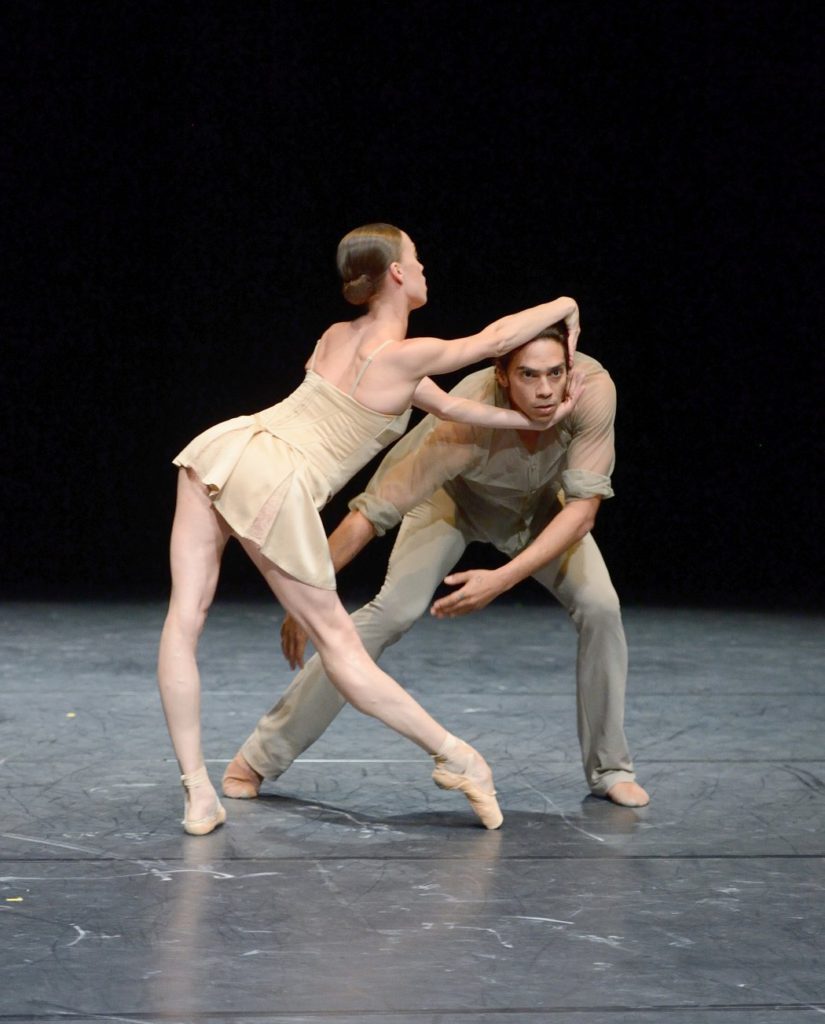 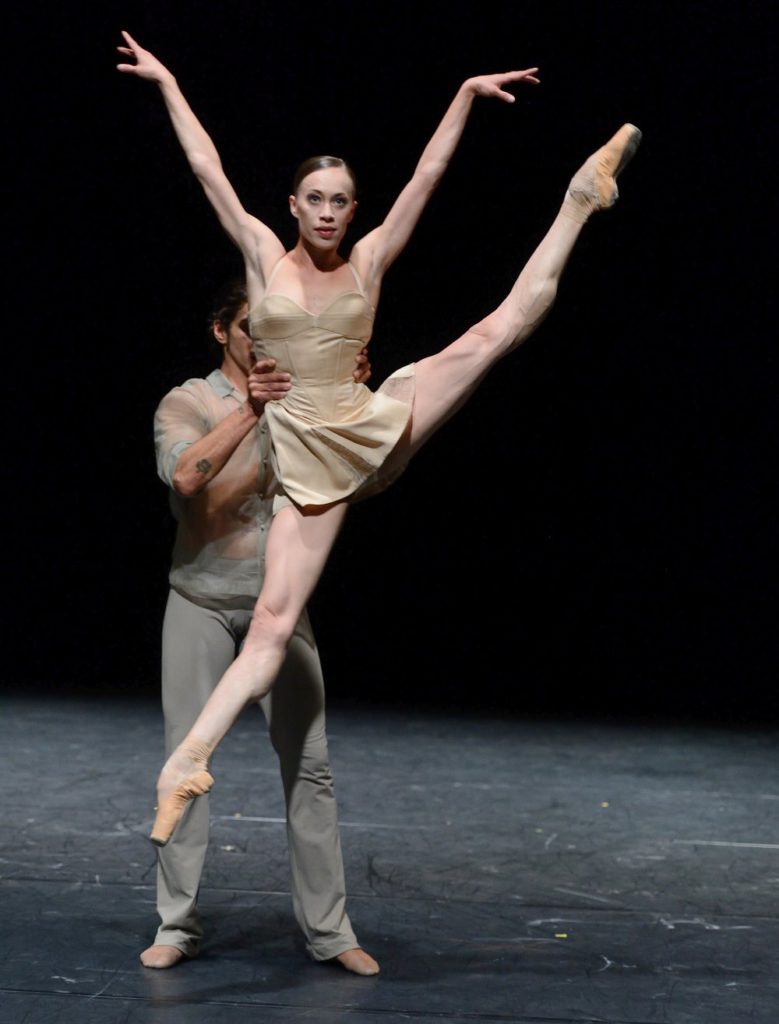 In Stuttgart the ballet season reached its climax this July. Reid Anderson’s twentieth jubilee as artistic director is being celebrated with a vast program of extras for three weeks. On July 3rd he had allowed insight into his life and career in the talk “Everything you Always wanted to Know…”. The film documentation “Miracles and Superheroes – 55 Years Stuttgart Ballet” received its cinema premiere on July 15th. It was broadcast on television on July 20th. 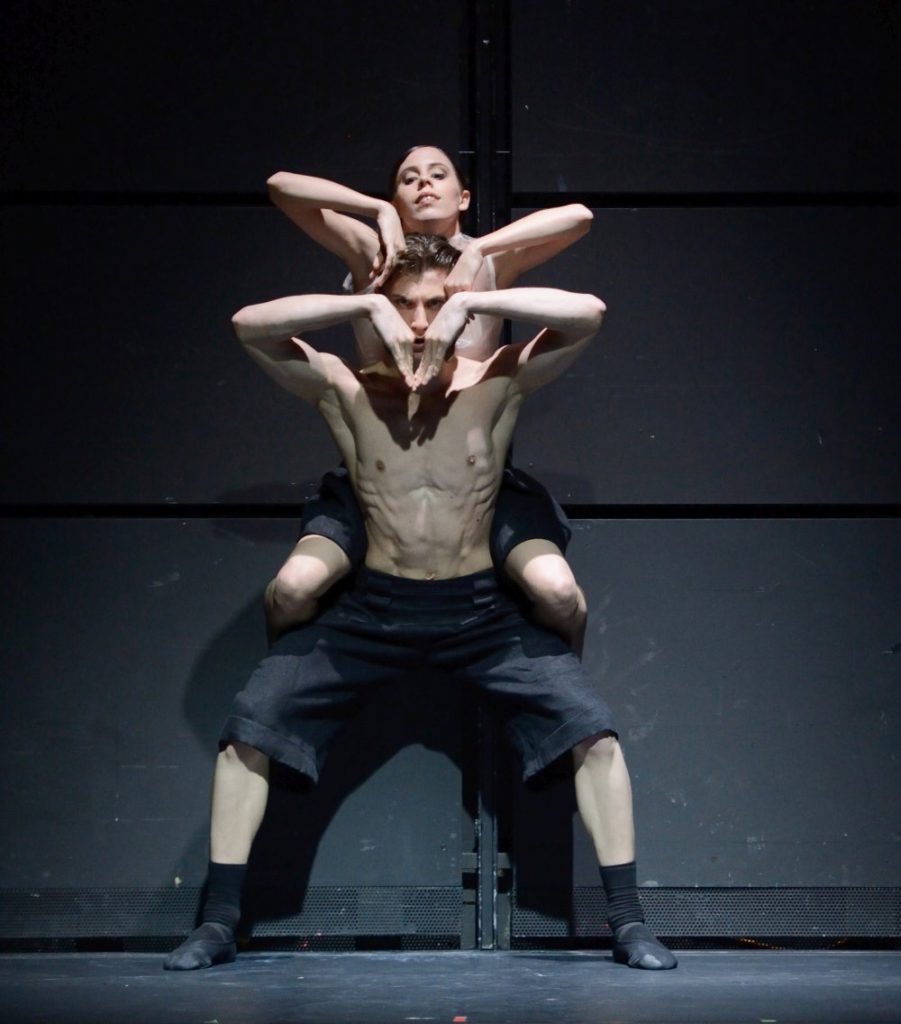 Sue Jin Kang will bid her farewell to the Stuttgart stage as Tatiana in “Onegin” next to Jason Reilly. Two other masterpieces of John Cranko, “Romeo and Juliet” and “The Taming of the Shrew”, are danced on the two preceding evenings. A mixed bill combines pieces by William Forsythe, Marco Goecke and Uwe Scholz, who all have or had strong connections to Stuttgart Ballet.  The festivities conclude with two galas: On Saturday, July 23rd, students of the John Cranko School share the stage with students of the School of the Hamburg Ballet, the School of the Paris Opera Ballet, the Royal Ballet School and Canada’s National Ballet School. One day later Stuttgart Ballet welcomes international guest dancers in a final gala.

I saw a matinee of the mixed bill “Sketches” on Sunday 17th, which revived excerpts from Stuttgart premieres of the last twenty years. Many of them had emerged from the Noverre Society’s ballet evenings for young choreographers, which for decades has proved an incubator for fresh talents. “Sketches” was performed in the small-scale Kammertheater whose only 200 seats intensified the atmosphere of a Stuttgart Ballet family reunion. 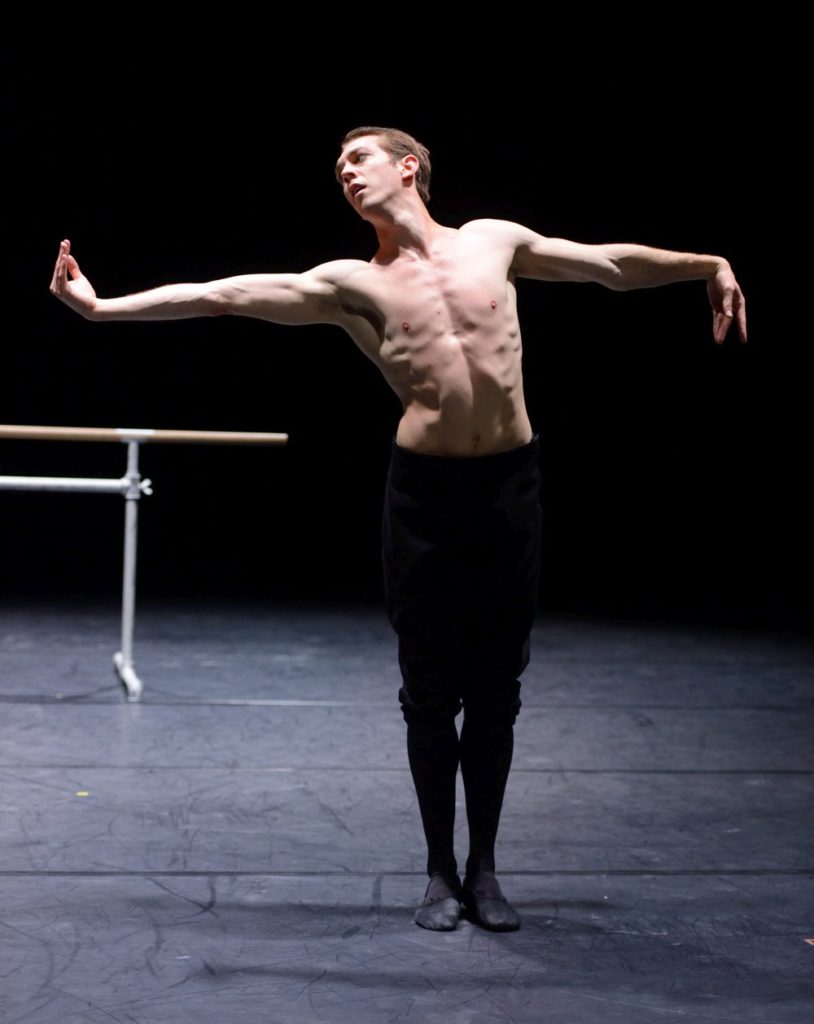 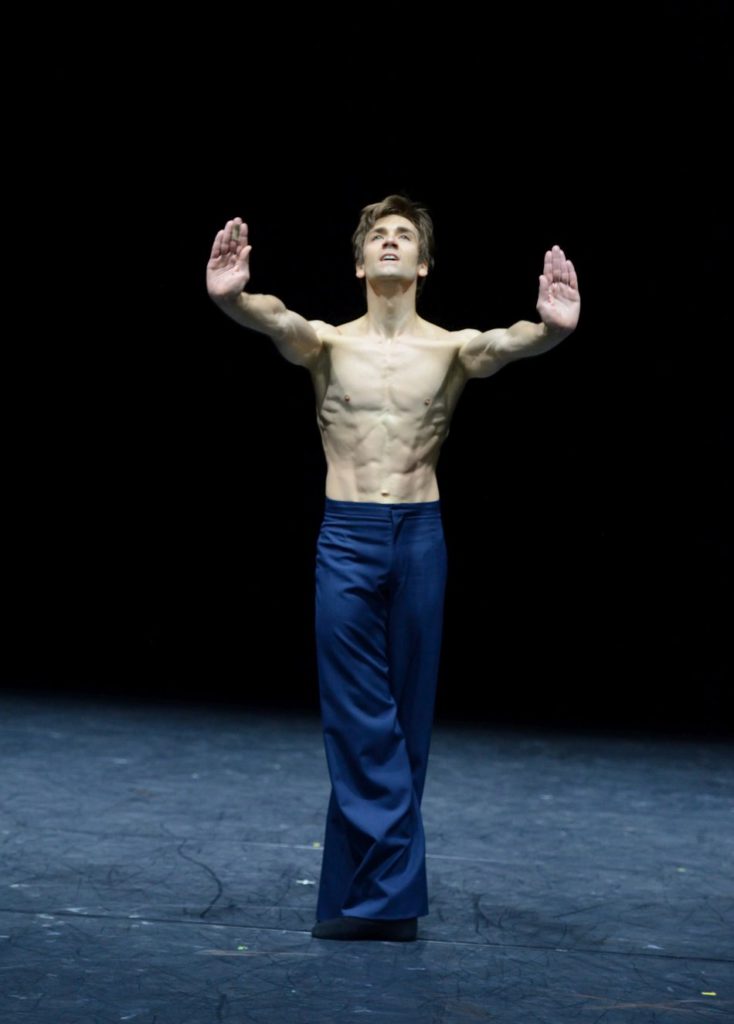 Twelve short samples by twelve choreographers within two and a half hours provided a broad, yet not overly diverse, spectrum. Some pieces’ characteristic style quickly revealed the choreographer behind them. As in other choreographies Demis Volpi, one of Stuttgart Ballet’s resident choreographers, had focused on pointe shoes in his 2010 “Big Blur”. Angelina Zuccharini’s legs resembled drumsticks, pattering the music whose rhythmic drum rolls were reminiscent of a circus ring. Fluttering arms, sharp jumps, fascinatingly playing back muscles and the costume, a plain black pant, identified “Orlando” as a work by Marco Goecke, Stuttgart Ballet’s other house choreographer. Friedemann Vogel danced it brilliantly. 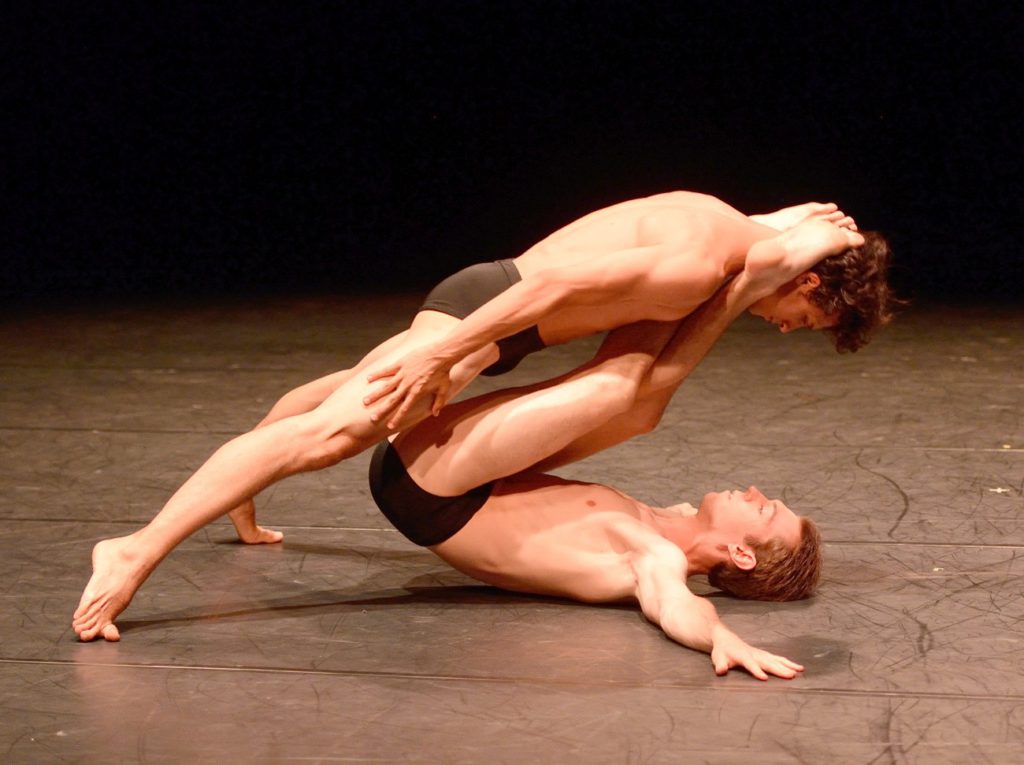 Mauro Bigonzetti’s “Orma”, choreography from 2004, had Robert Robinson and Pablo von Sternenfels, both in black briefs, scramble about on the floor. As in other works Bigonzetti emphasizes the physicality of interactions some of which are erotically charged. Douglas Lee’s piece, a pas de deux of “Miniatures” danced by Elisa Badenes and Martí Fernandez Paixa, distinguished itself as a “Lee” by its flow of swift moves and twisted torsos. The repetitive piano music stopped several times, bringing the dance to a halt. Near the end Badenes sat on the floor, stared towards the audience and for some inexplicable reason ran out. The choreography looks hip, but was it fueled by any meaning from inside? The same came to mind with Edward Clug’s “Ssss…”. Pablo von Sternenfels, observed by five fellow dancers sitting on chairs in the rear, went through a haphazard succession of sharp, sleek moves to Chopin music. What was his motivation? Later, he was joined by the others in what looked like a dance session of eccentric young couples. 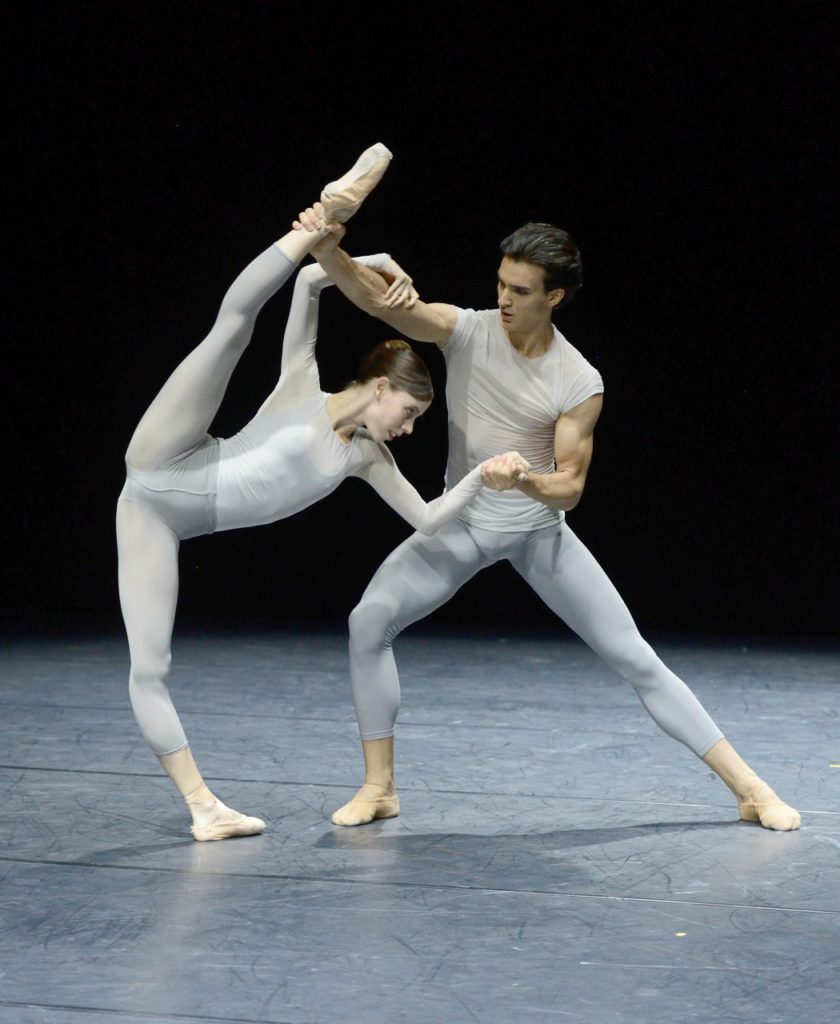 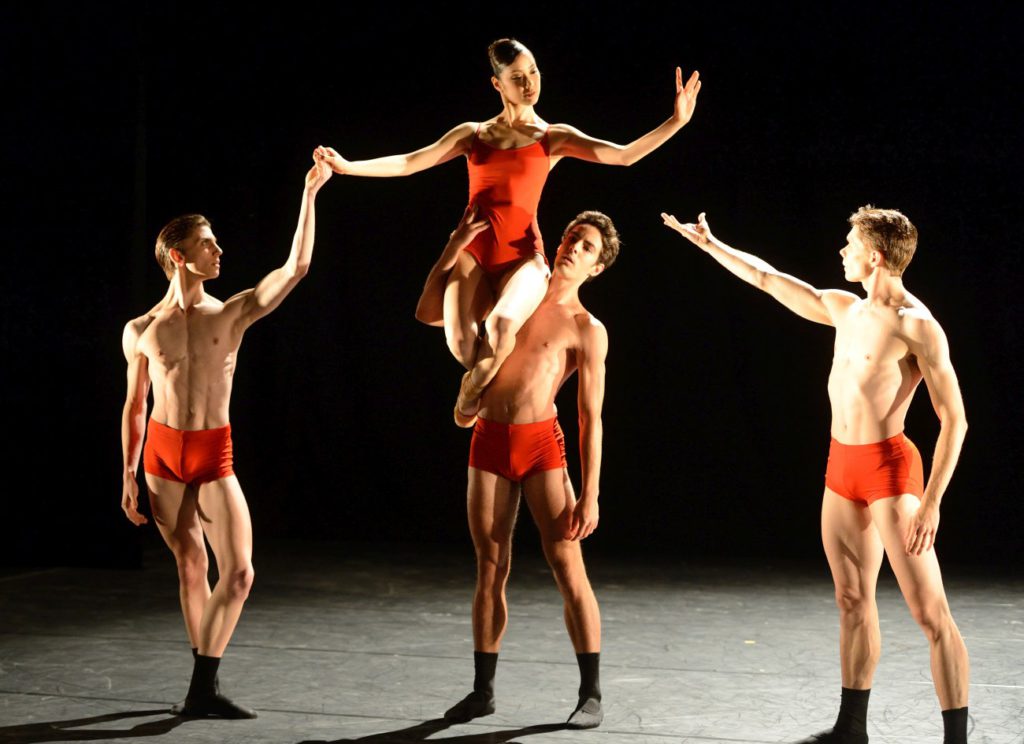 Similarly to Clug, fellow choreographers favored a past paced, markedly technical aesthetic with the stylish elegance of a Porsche. One of them is Marc Spradling. His “Melodious Gimmick to Keep the Boys in Line” from 2005 made one wonder what the gimmick should have been. In any case Rocio Aleman and Ami Morita managed to keep four boys busy with partnering.

In “R.A.M. (Random Access Memory)” by Martino Müller, a cyber-world’s faint electronic waves seemed to run through the dancers. R.A.M. deals with the storage systems of computers and brains, hence the waves might also be brain waves.  Louis 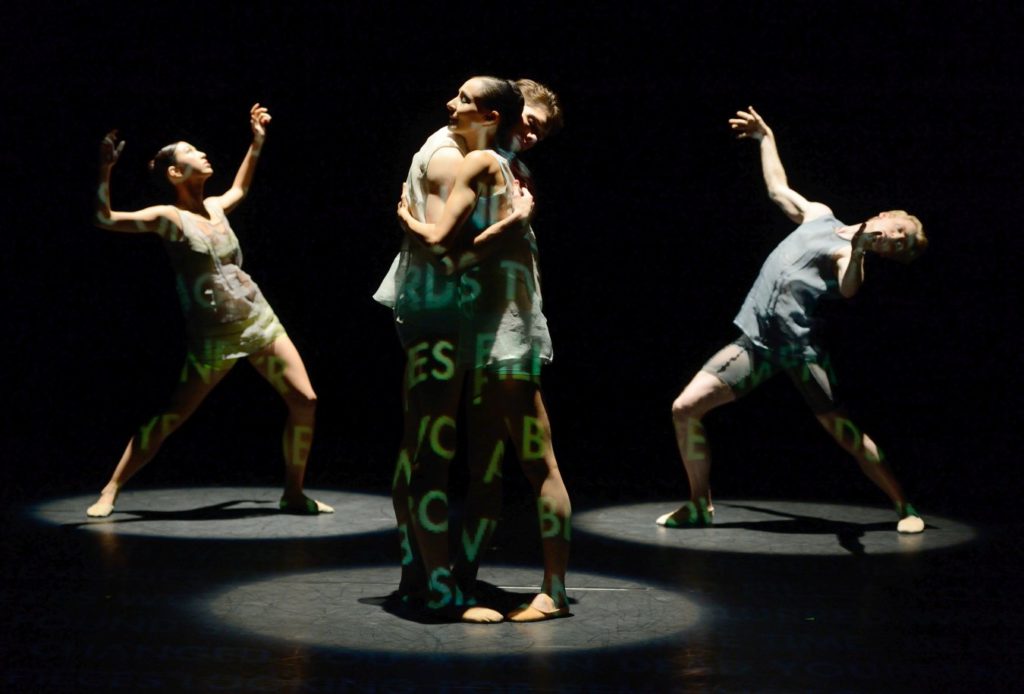 Stiens borrowed from Marco Goecke’s style for “The Boy”, a 2014 solo danced by Robert Robinson. It is a funny persiflage on the military-like drill at the ballet barre. I had hoped Katarzyna Kozielska would add a hint of self-mockery to her “Firebreather” too, but she seemed serious about it. The solo, danced by Adhonay Soares da Silva made me think of a commercial for a smart electronic device aiming to be super cool. Soares da Silva didn’t breathe fire, but leaped and swirled to perfection from one spotlight to the other. A complacent and shallow piece.

Bridget Breiner’s “Sirs”, by contrast, her debut piece at the 2007 Noverre evening, has warmth, humor and ease. Breiner portrays a cliché romance, a sweet young woman (Alicia Amatriain) roaming around with three young cowboys. Though they 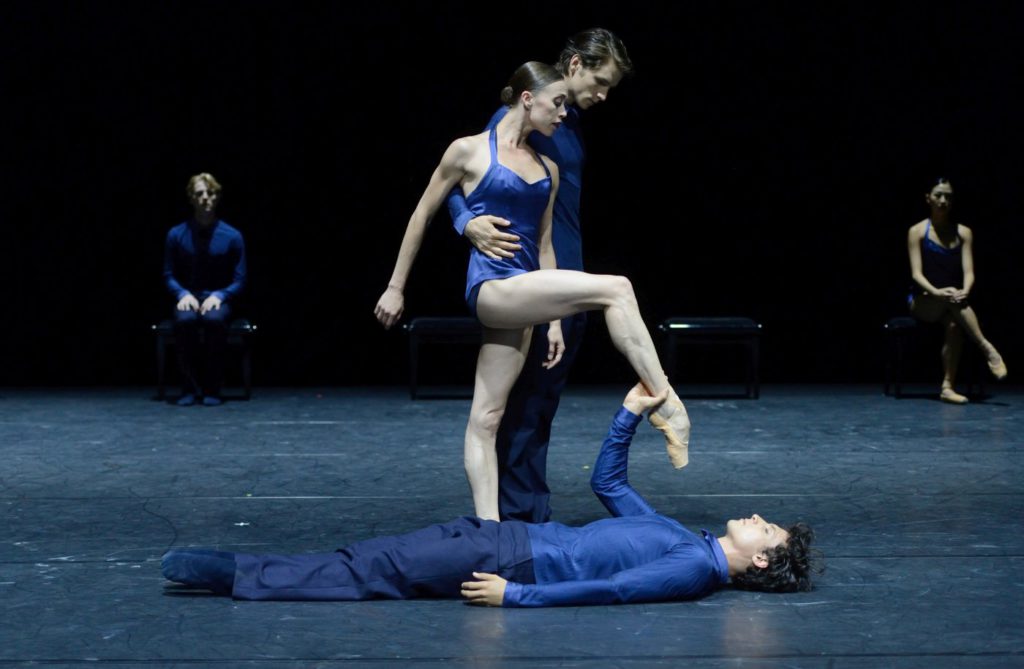 fancy themselves real men it is in fact Amatriain who is wearing the breeches.  Also the pas de deux of Anna Osadcenko and Jason Reilly was charming. They danced an excerpt of Kevin O’Day’s “Delta Inserts” dating from 1999. It is about the back and forth in a love relationship, about impressing and snubbing, attraction and feigned rejection. Reilly was wonderfully nonchalant. His presence filled the house.

In 2003 Horst Koegler had praised Christian Spuck’s “Lulu. A Monster Tragedy” as a “Stuttgart avalanche-choreography at its best”. “Traces” concluded with a witty snippet of it which whetted the appetite for a revival of the whole. Amatriain was Lulu, the saucy Lolita, seducing David Moore’s innocent Alwa but taking the liberty to flirt with quite a number of other admirers.

At the curtain call Bridget Breiner urged Reid Anderson who had tried to remain unseen behind a pillar on stage. He directed the heartfelt applause to the evening’s choreographers and his dancers. Such is the family feeling in Stuttgart. 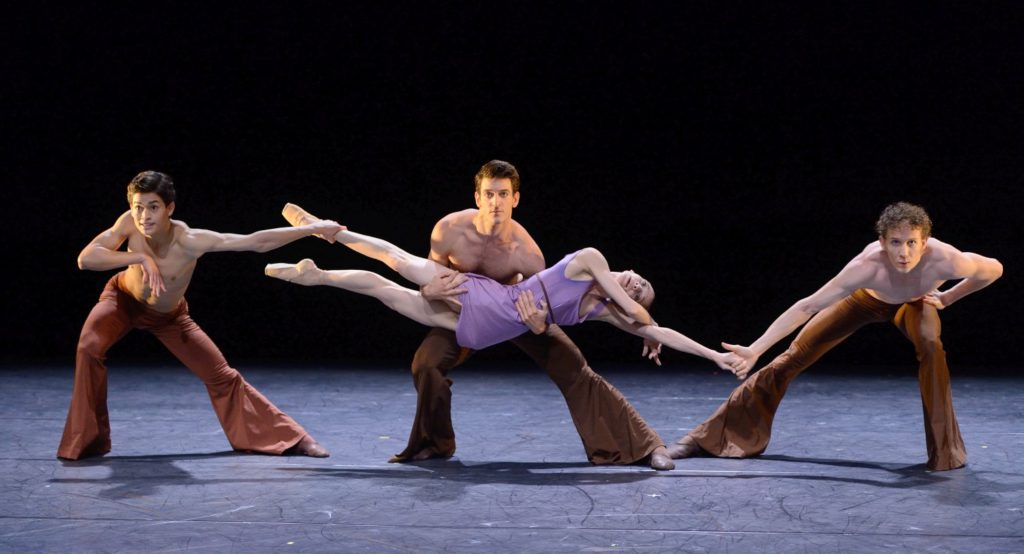