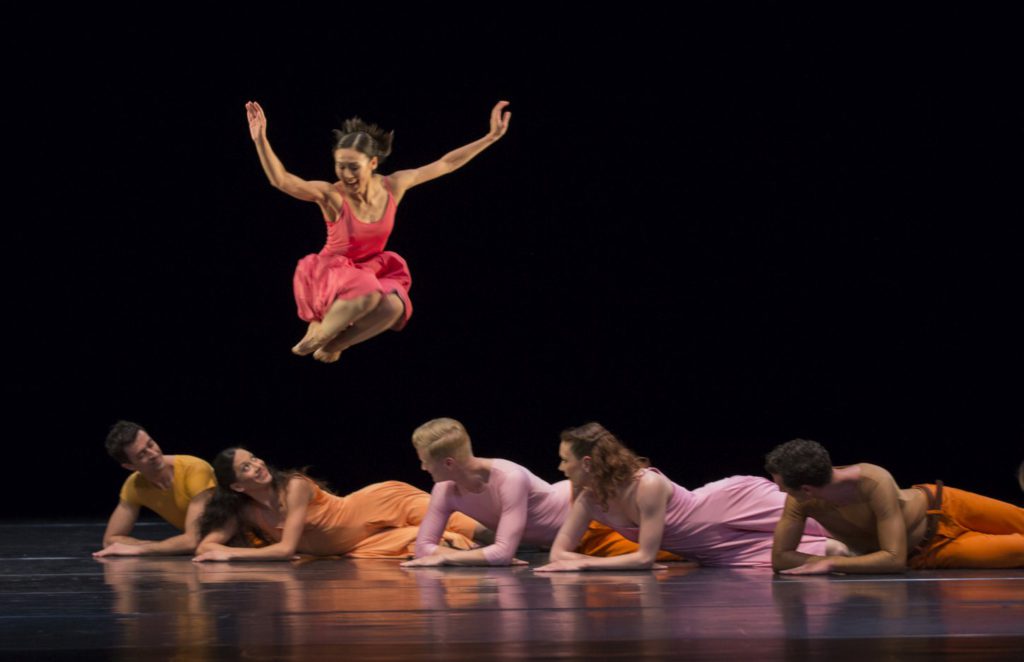 Works by Paul Taylor are very rare on German dance stages. It was a welcome chance to see a key work of the “naughty boy of Modern Dance”, as Taylor jokingly called himself in a 2013 video. “It was not acceptable what I was doing…” recalls Taylor about his beginning in the mid 1950s in New York. Basically because his pieces have no dance steps and his language is made up of everyday movements. His dancers walk, run, jump or slide across the floor. That might 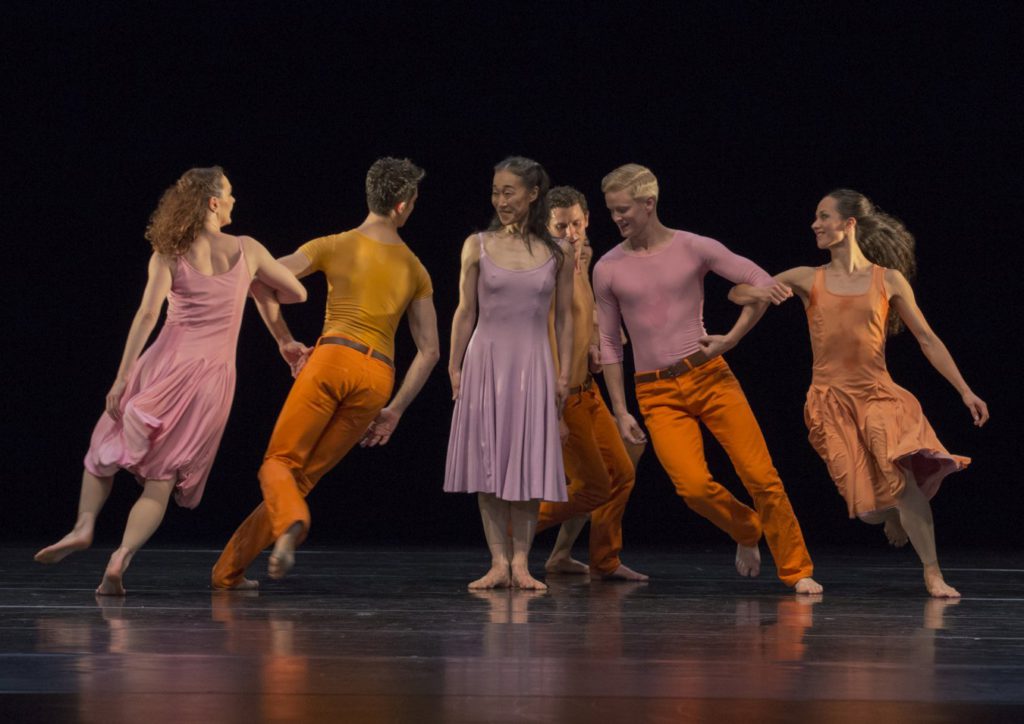 sound banal but it is fascinating here to watch the six women and three men, costumed by John Rawlings in casual wear colored in orange and brown-orange. Though created more than forty years ago, “Esplanade” conveys a feeling of refreshing ease and naturalness. Nothing is put on, nothing elaborated.

To violin and string music by Johann Sebastian Bach, the dancers stride briskly across the stage, unexpectedly change directions, gather, separate and regroup. “Esplanade” has three parts, the first has a buoyant atmosphere characterized by respect and kindness between the dancers. Paralyzing sorrow yet mixed with yearning hope define the second part in which one grieving person sits lonely at center stage. Finally the group 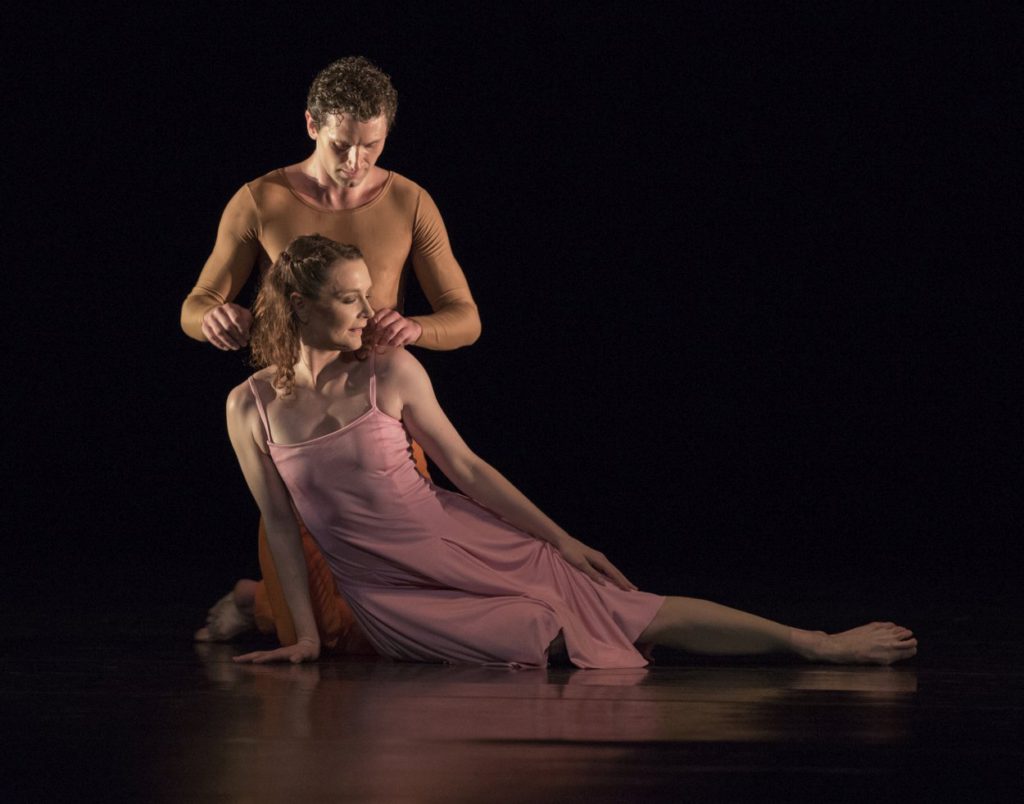 gathers around her. Seeing them crawling on all fours, one is reminded of the way children comfort each other. The third part bubbles with high jinks. Dancers sprint across the stage, jump high, slide down on the floor, turn like jaunty whirlwinds or row with their arms. When the women finally jump from full speed into the arms of their men the scene quiets down.

Precisely because of its natural flow “Esplanade” was the evening’s strongest piece. By contrast, Essakow and Christe’s ballets, both world premieres, seemed contrived.
South-African-born Essakow is based in London. His “Tenebre” roughly deals with mankind’s evolution: breaking loose from the shadows, straightening oneself and, with some grand leaps, reaching towards transcendence. 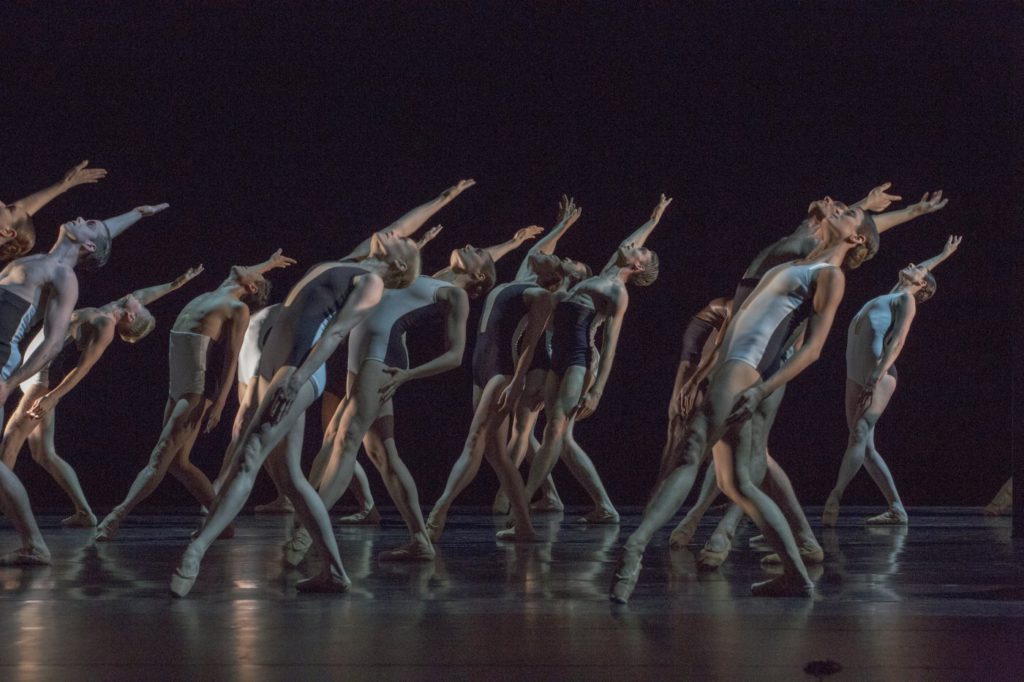 To waves of electronic sounds by Gareth Mitchell the dancers at first bunch center stage in the dark while lifting a woman lit by faint red light above their heads. Then the mass of bodies lies on the floor and crawls arduously towards the left corner of the stage like primeval amphibians on their first moments ashore. Microphones installed in the stage floor render the physical effort audible. Gradually the darkness turns into twilight. Three large black and white paintings depicting streams of white color on a black ground structure the space on stage, possibly representing pale tap roots. Merle Hensel’s swimsuit-like costumes reflect the black and white color scheme. Several male/female and all-male pas de deux occur in front of the paintings. 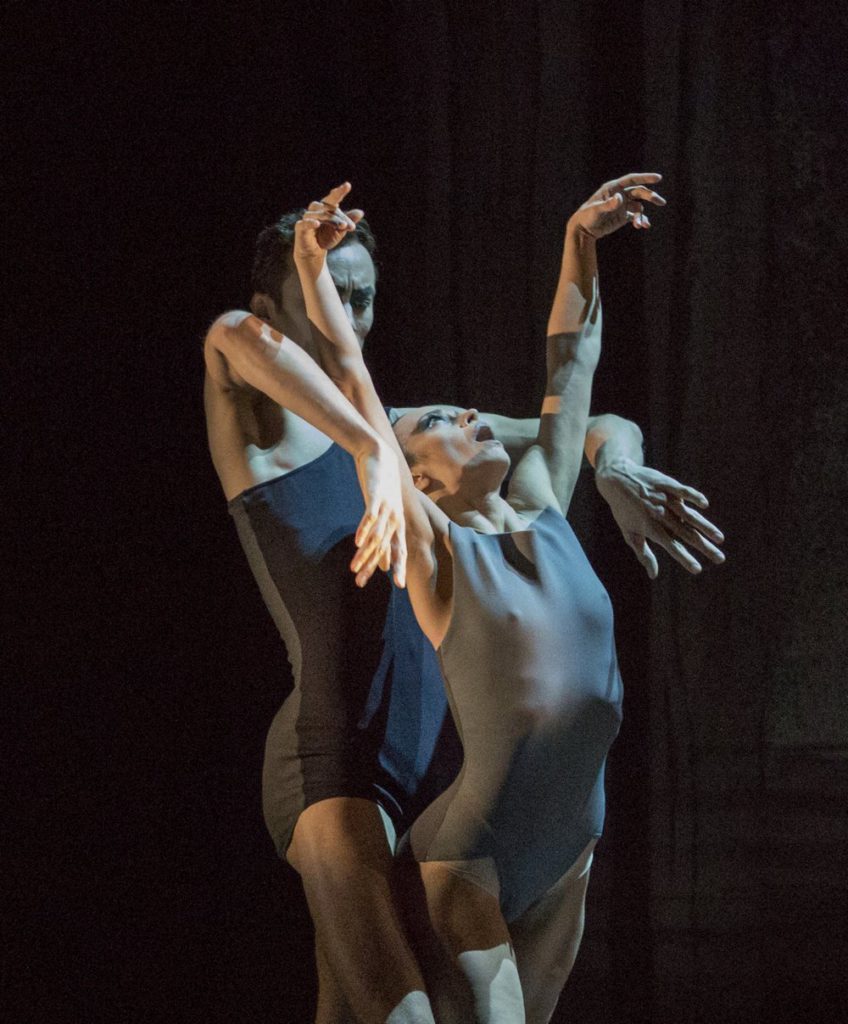 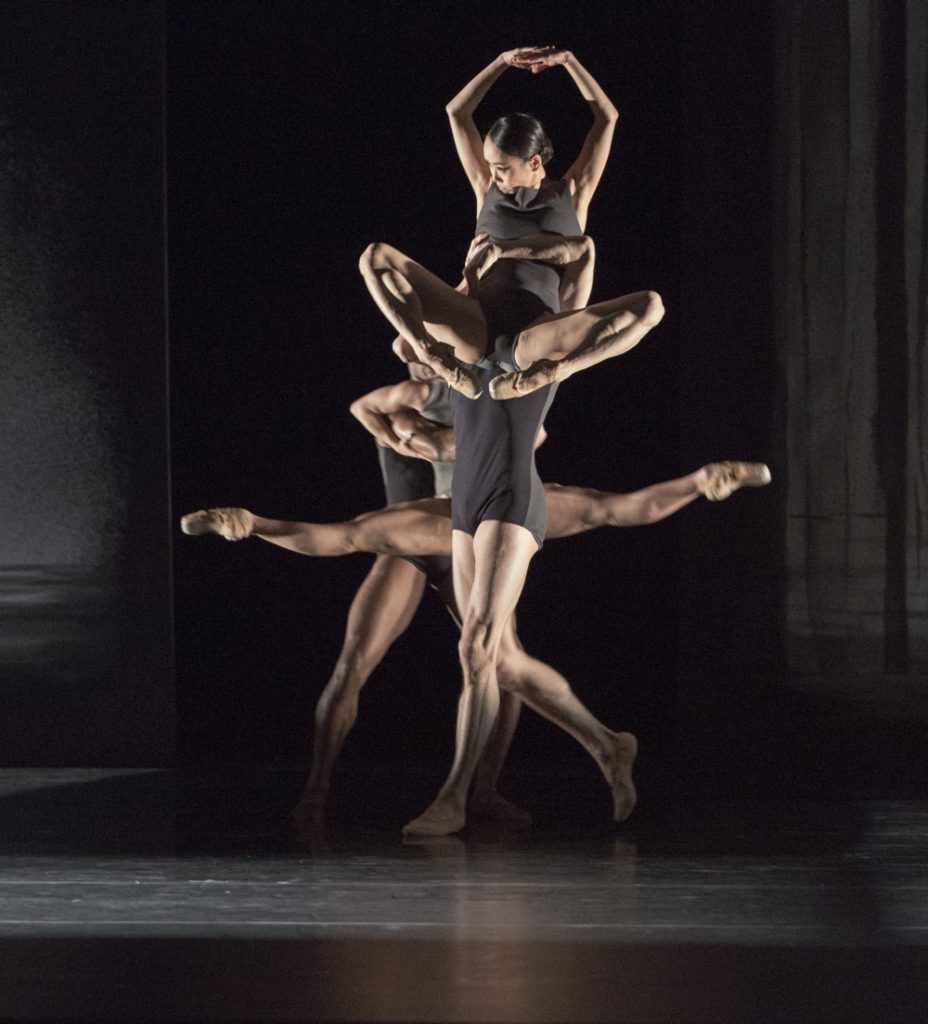 The group performs inexpressively meaningless moves to violin sounds which do not mirror the music’s pushing rhythm. Then, one after the other, the paintings are raised as well as the black backdrop, revealing prehistoric surroundings of light brown tree trunks in arid soil under wan light. But pointe shoes and grand jetés signal that mankind has ascended. I was wondering to what heights the dancers would soar if “Tenebre” had traced evolution further into our times.
Essakow’s choreography has nothing memorable in it, no culmination. But that is exactly how evolution mostly occurs, gradually and unnoticed in the moment. 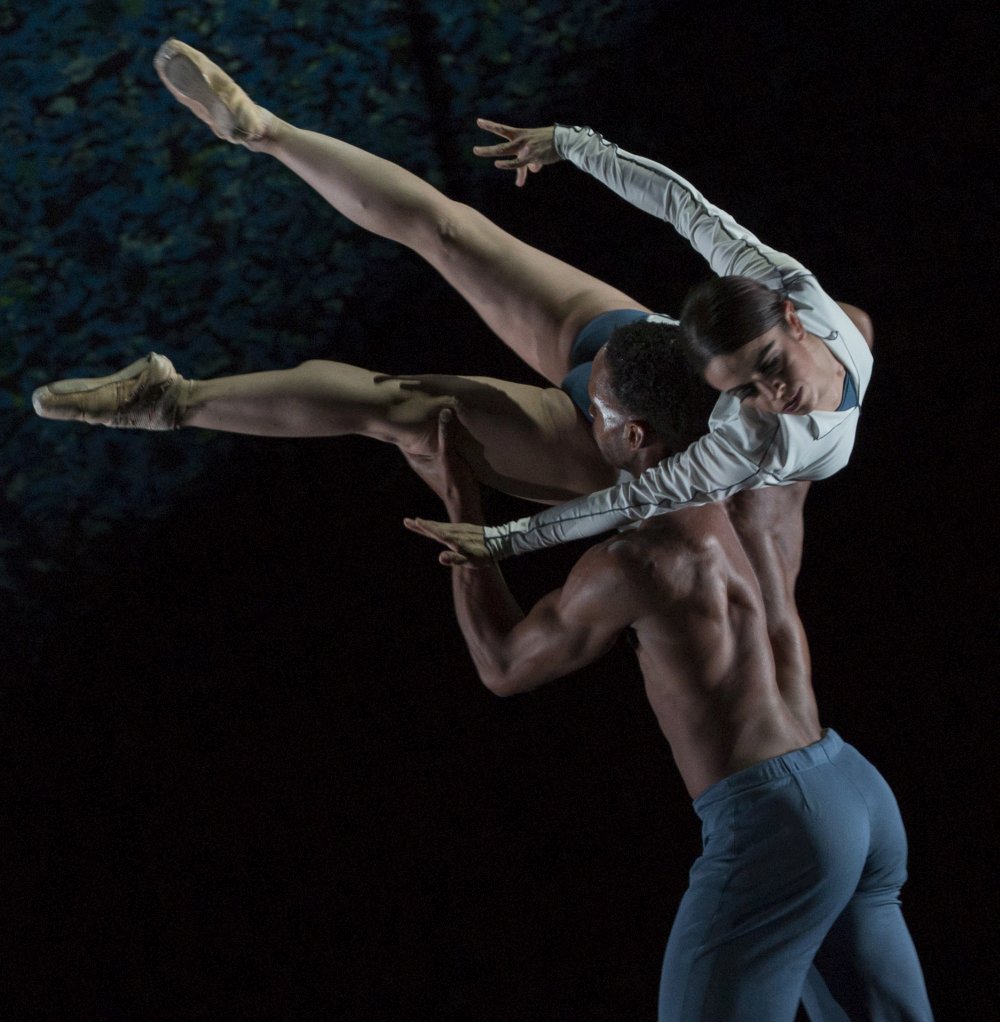 Essakow draws his initial inspiration from his own experiences or emotions. Choosing the music comes second. Yet for Christe music is the starting point. Some movements of Philip Glass’s Symphony No. 3 and his Concert for violin and orchestra led to “Different Dialogues”. The title outlines Christe’s general understanding of dance as a form of communication both between the dancers, the dancers and their audience, and dance and music. He pairs dancers in erotic pas de deux, develops a ménage à trois, has the dancers stomp, cut through the air or walk casually. Repeatedly ballerinas are lifted or carried around, their legs suggestively spread wide open towards the audience.

Marlúcia do Amaral has the most interesting part. Accompanied by the sound of glass being crashed, she threw herself into the arms of three men one after the other. The noise indicated demolition work and similarly the condition of her relationships. Afterwards a constant flow of pas de 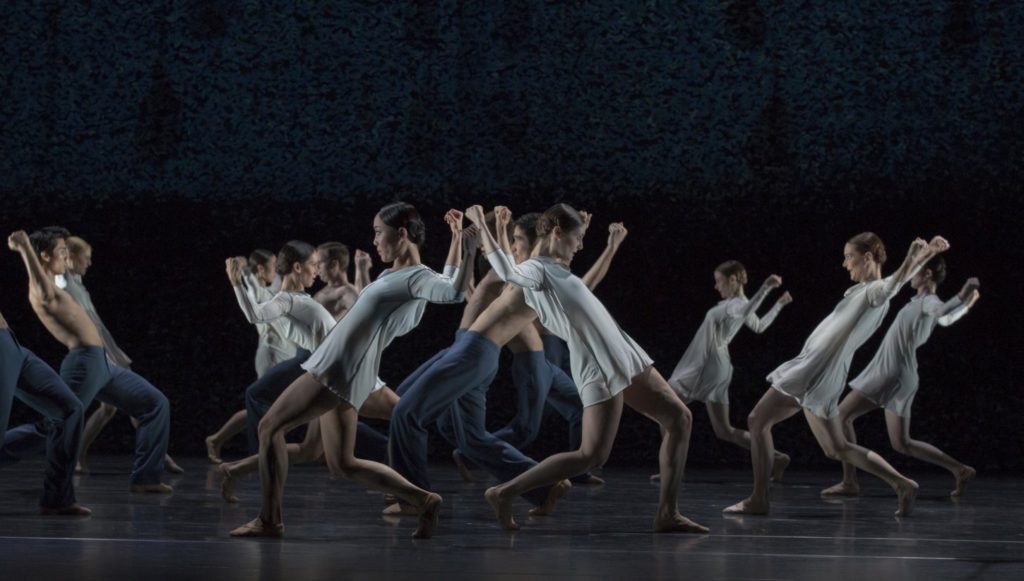 deux with couples emerging out of dense clouds of fog in the back filled the second half of the work. Christe’s choreography for the group is trite. But maybe that fits with what he intends: the synchronization of individuals into a featureless bulk. Did he aim to depict a failed dialogue between dancers and the audience?

The most catchy scene for the group reveals the dancers standing among a forest of metal rods which have lights at their lower ends. The space to move is as limited as the music’s range of variation. Later the rods are raised to create a ceiling of orderly arranged light spots. Christe’s dialogues are not as different 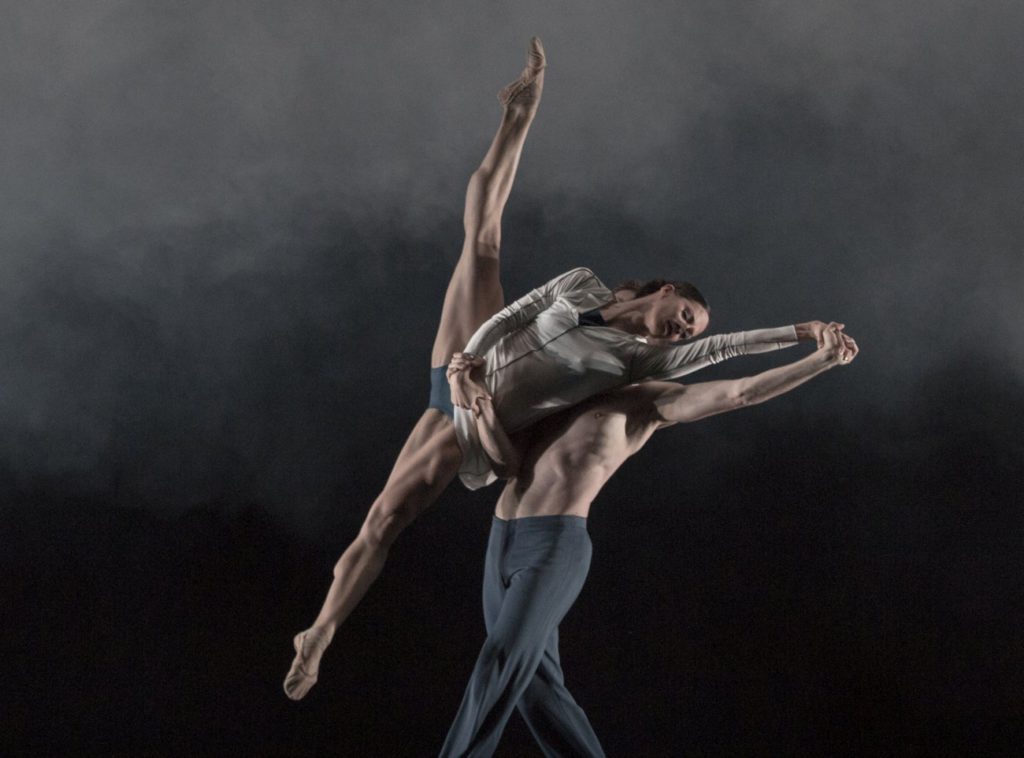 as announced they would be. Maybe less monotonous music would result in a more gripping conversation.

Still the company danced with abandon and was in very good spirits. The Düsseldorf Symphonic Orchestra under the baton of Aziz Shokhakimov was also excellent. For three dancers “b.28” was their last performance with the Ballett am Rhein. Louisa Rachedi, Aryanne Raymundo and Andriy Boyetskyy are leaving the company at the end of this season. Boyetskyy’s little son presented his father flowers. Schläpfer bid all three good-buy with flowers as well. Thus the season closed with warm-hearted applause. 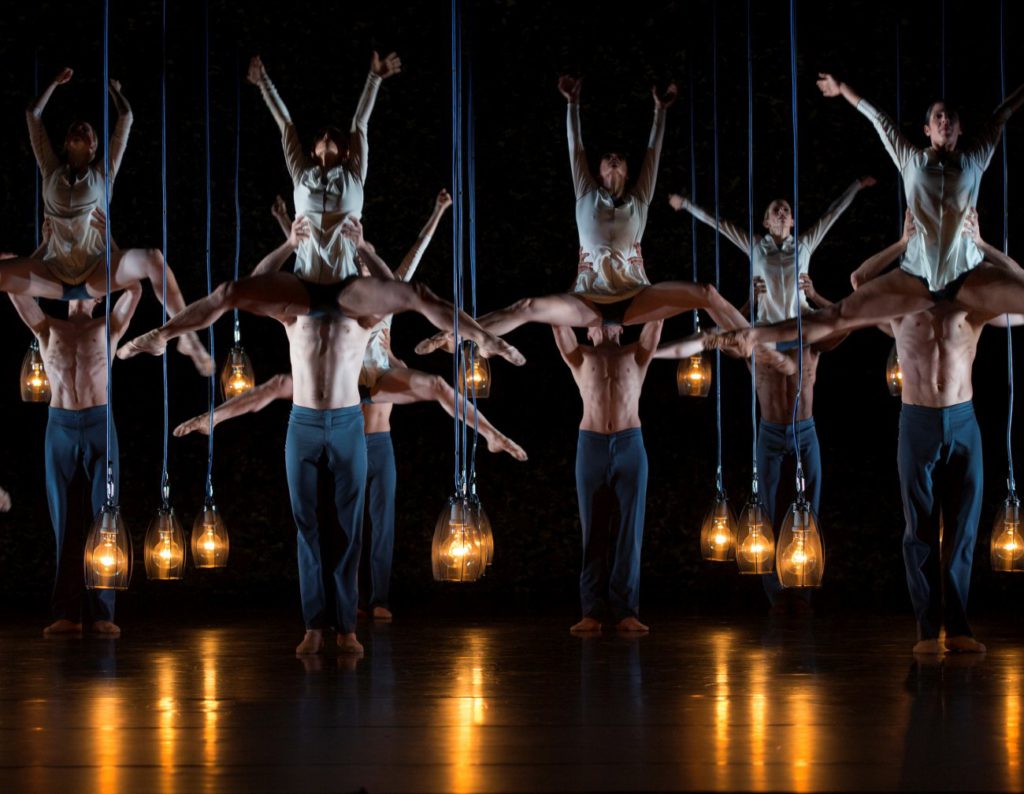