“I could identify with the Palucca School and its values” says Brooke Squire, who is in her last year of the Bachelor program of the Palucca University in Dresden. The nineteen-year-old had started her dance training at Stuttgart’s John Cranko School, but four years ago decided to move, because “unlike in Stuttgart, where the focus is on classical ballet, in Dresden it is half on ballet, half on contemporary. We are more involved in the creative process and the teachers are open to communication.”

Brooke Squire was the first person I met at my visit to Dresden’s Palucca University of Dance. The only independent university for dance in Germany, it offers a six-year education beginning from age ten followed by bachelor and master programs, which include degrees for dance (B.A.), dance teacher (M.A.) and choreography (M.A.). Four years of secondary school complete with diploma are integrated into the curriculum.

Gret Palucca (1902 – 1993), a student of Mary Wigman, founded the school in 1925. Being one of the most famous expressionist dancers of her time, Palucca understood dance training differently from classical ballet’s strict regime. She aimed at a freer, more natural and individualized expression. Being half-Jewish, Palucca was forced to close her school in 1939. It reopened in 1945 with only ten students. But, as expressionist dance wasn’t popular any more, East Germany’s socialist authorities expected Palucca to teach the Vaganova system of ballet. Yet by inventing the term “Neuer Künstlerischer Tanz” (“New Artistic Dance”) for her concept, Palucca managed to maintain her basic pedagogic principals alongside ballet in the curriculum. After German reunification in 1990, the Palucca School returned to its founder’s ideals by basing its syllabus on three pillars: classical dance, contemporary dance and improvisation.

In 1999 the former school was accredited as a university. During the following years the old main building, located at the edge of Strehlen, a quiet, affluent neighborhood of Dresden, was thoroughly renovated. It houses the secondary school, two dance studios, the administration, the canteen, the costume department and fitness rooms with Gyrotonic and Pilates equipment. A body awareness coach (Brooke Squire’s father) works with the students at the machines. Nine dance studios of which two can be connected to an auditorium for performances are in a newly constructed annex building. Their large windows look out onto green gardens and the neighboring park. Also the boarding school for in total seventy-five students is located in the new building. In case one has forgotten something for class, the way to the dormitory needs less than one minute. Two additionally purchased adjacent villas provide study and seminar rooms,

the library and the archive.

The afternoon I walked round the campus seemed quiet but behind the doors the students either had training or are at their books. In Prof. Anke Glasow’s improvisation class, for example, the second-year bachelor students worked on mirroring their partner’s movements while relating their moves to other pairs. It was the first class after the summer break; hence the students still had to get acquainted with the exercise, but Glasow is an old hand. Nothing slipped her attention but was addressed with humor and an easy going attitude. Her teaching reflects the atmosphere in the whole house, it is light, kind and warm-hearted.

Carl Becker, a student of the 8th grade, the second student I talked to, took some time before his maths lesson to tell me about his daily routine. His parents, both former dancers, live in Dresden, so he doesn’t stay in the boarding school. “Usually we start with dance in the morning. Today I had 90 minutes ballet followed by regular subjects: physics, informatics and English, among others. On other days we have 4-5 dance lessons. I’m rather fidgety so having training right in the morning helps me to concentrate on the academic subjects.” School ends at 5:30 pm; afterwards Carl has to do his homework. No time for extras during the week, but the weekends are free. Similar to Brooke it is important for him to be trained in classical dance just as well as in contemporary. Enthusiasm mixes into his voice when talking about ABT, his favorite company. ABT’s Daniil Simkin is his example. Let’s see where Carl’s career takes him in a few years.

The credit for having established the international reputation of the Palucca University in large part belongs to Prof. Jason Beechey, its director since 2007. The Canadian, who looks back on a dance career with London City Ballet and the Belgian company Charleroi Danses, gained pedagogic and leadership experience as Educational Director of Charleroi Danses. In collaboration with William Forsythe, Wayne McGregor, Angelin Preljocaj and Frédéric Flamand, he created the D.A.N.C.E. program. He also belongs to the artistic committee of the Prix de Lausanne, of which the Palucca University is a partner school. Beechey moreover built school partnerships with twenty universities worldwide, among them the Conservatoire de Paris, the San Francisco Ballet School and Canada’s National Ballet School. Study exchange programs exist.

The most important local cooperation is with the Semperoper Dresden. Beechey and the Semperoper Ballet’s artistic director, Aaron S. Watkin, a fellow-countryman, brought the apprenticeship program into being. This season it gives six students the chance to train, rehearse and perform with the Semperoper Ballet. Traditionally, students of the orientation classes also enter the big stage when participating in the “Hansel and Gretel” opera and in the annual “Nutcracker” ballet.

Today the Palucca University has around 200 students from around twenty-six countries. With only 15-20 students per class, in advanced classes even fewer, teachers can keep an eye on each individual’s development. For the two orientation classes starting from 5th grade mainly children from Dresden’s periphery apply. The staff of the Palucca University regularly visits kindergartens looking for potential talents. Also in the Young Talents Program (7th -10th grade) German students make up the majority. In the secondary school, lessons are taught in German, hence students need to have a good command of the language. 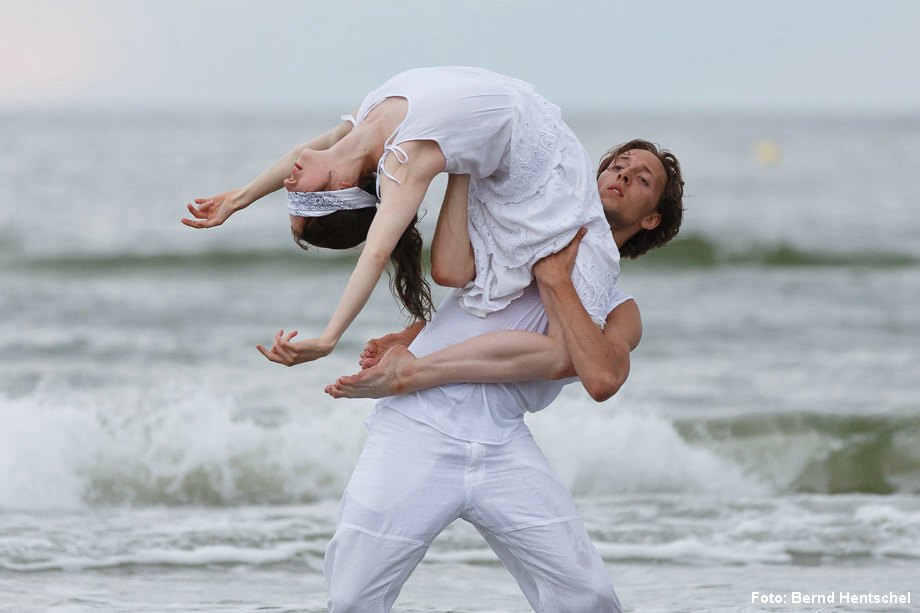 The percentage of students from abroad rises in the Bachelor and Master study programs. Except for the master courses no study fees are charged in addition to to the usual semester fees of around €200,-, which certainly enhances the university’s attractiveness. With, for example, six students enrolled in the master program for choreography the course is filled to capacity this semester. As some units are taught via e-learning the students don’t need to be present all the time. Of the in-house bloc lectures they share some – dance/architecture and psychology for example – with the students of the dance teacher program. Others are explicitly

tailored to the respective courses. Stephan Thoss, formerly artistic director of the company of the State Opera Hanover, now a freelance choreographer, is a graduate of the university’s choreography course.

in the building-up process” she says. “Student numbers are rising especially in the bachelor programs. This March we had the first audition in Seoul in Korea, which gained us four students. In Asia there are many talents hungry for a chance to professionalize their education.”

Palucca students have good prospects for employment. On average ninety percent of each year’s graduates get a job; of the 2016 class all found work. Many join one of the smaller companies in Thuringia or other German companies. The Semperoper alone has around fourteen Palucca graduates in its roster. Some graduates go freelance, for example in Hellerau near Dresden. But Palucca graduates are spread as far as to the other end of the world, to

Perth, for example, and New Zealand. Among the names of ex-Palucca students are Hamburg Ballet’s Leslie Heylmann and Carsten Jung; Johannes Schmidt and Christian Bauch, both in the Semperoper Ballet’s ensemble, and Andreas Heise from the Norwegian National Ballet.

This year it is Brooke’s turn to audition. Her confidence and sense of reality are impressing. Beechey’s (and Palucca’s) concept of encouraging students to “find their own voice and […] to learn, to grow, to take risks and to develop into autonomous, thinking creative artists” seems to work thoroughly. “I don’t want to set my mind too strongly on a certain 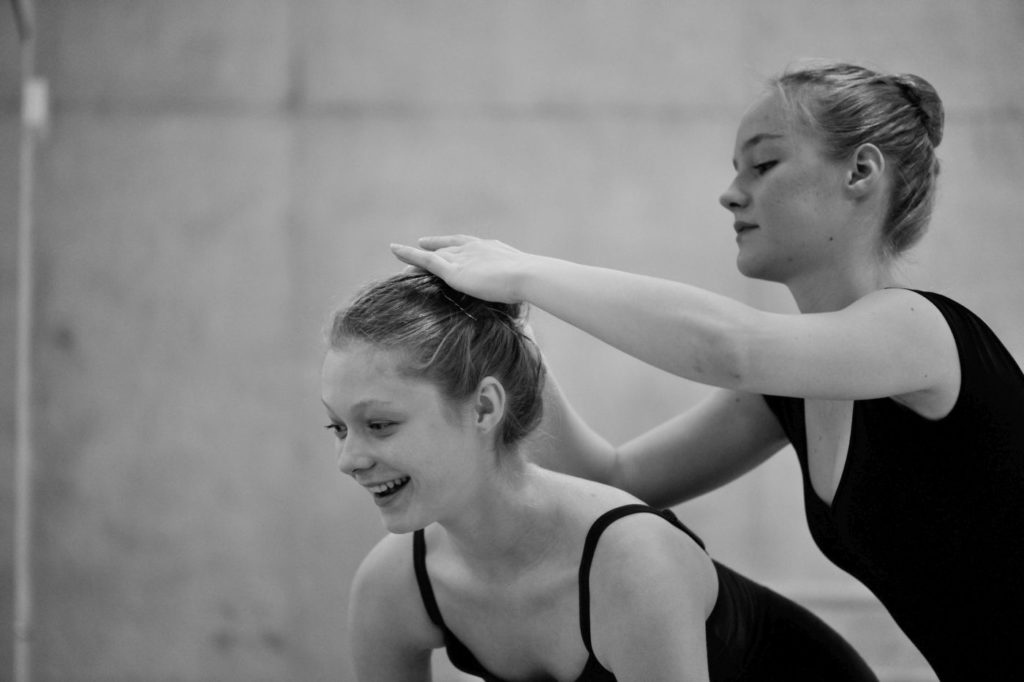 company, because if hat doesn’t work, then I’ll end up heartbroken. You have to be at the right time at the right place and I trust that this will happen. Of course I’ll do as many auditions as possible. My preference is a company in Europe or in Germany though. But I’m versatile and I’ll look around.”

Due to being familiar with a wide range of dance styles, Brooke feels well prepared for auditioning: “If someone would ask me to do something unusual, something crazy, I can say Oh, I tried that already in class. I trust in what I was taught by my teachers and, most of all, I trust in myself. It is harder for girls to get a job, because there’s more competition. But we do get encouraged to get the best out of ourselves every day and that will be no different when I go to an audition.” 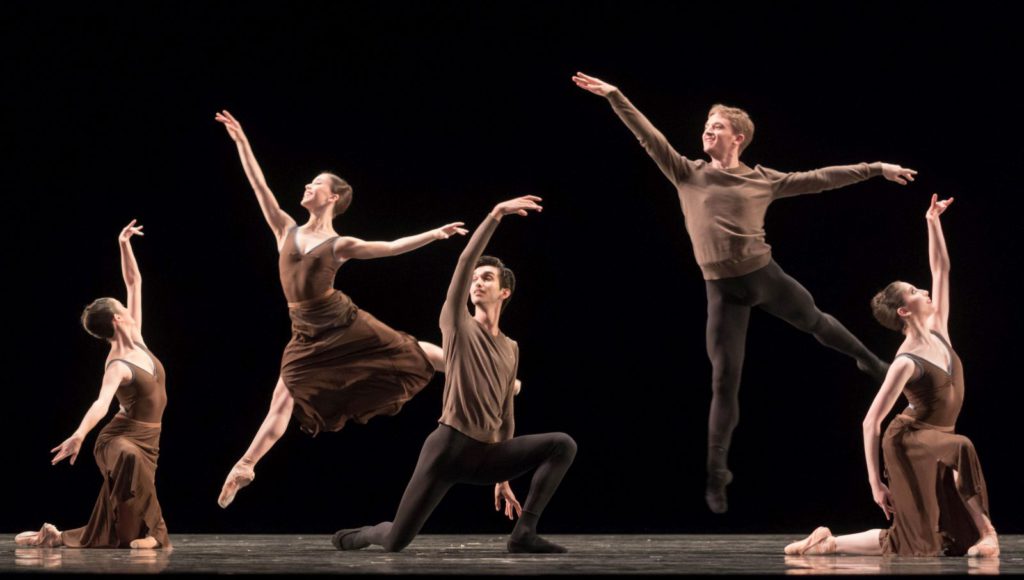