Perrault took his inspiration from “Sun, Moon and Talia”, a fairytale written by Giambattista Basile in 1834, to which Maillot included some references. The basic story of “La Belle” resembles the more traditional narrative of “Sleeping Beauty”. The beautiful princess falls under the spell of the evil Carabosse, which the Lilac Fairy is able to attenuate from being fatal to being soporific. Having slumbered for considerable time, the princess is found by a prince and awakened by his kiss. Naturally, prince and princess fall in love with 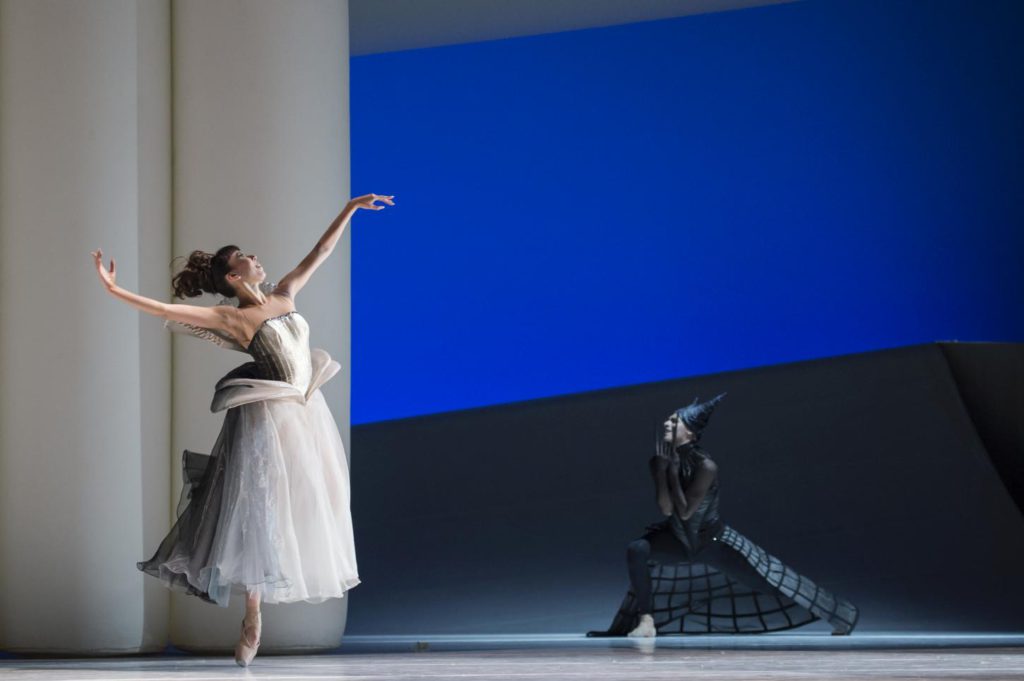 each other. Unlike the Grimm Brothers, whose “Little Briar Rose” ends at this point, Perrault tells the story further. His Carabosse, an ogre, undertakes a second attempt to take the princess’s life and almost succeeds. But, at the eleventh hour, the prince prevents disaster. A happy ending is secured, and Carabosse defeated.

Maillot focuses on the psychology behind the fairy tale, especially on its sexual aspects. His approach is brash, partly over the edge and not exactly ideal entertainment for little children.

Similar to most adolescents’ perception of themselves, prince and princess are portrayed as the only normal characters in an otherwise strange world. The story could be set in today’s time. The prologue depicts a young man reading “La Belle au bois 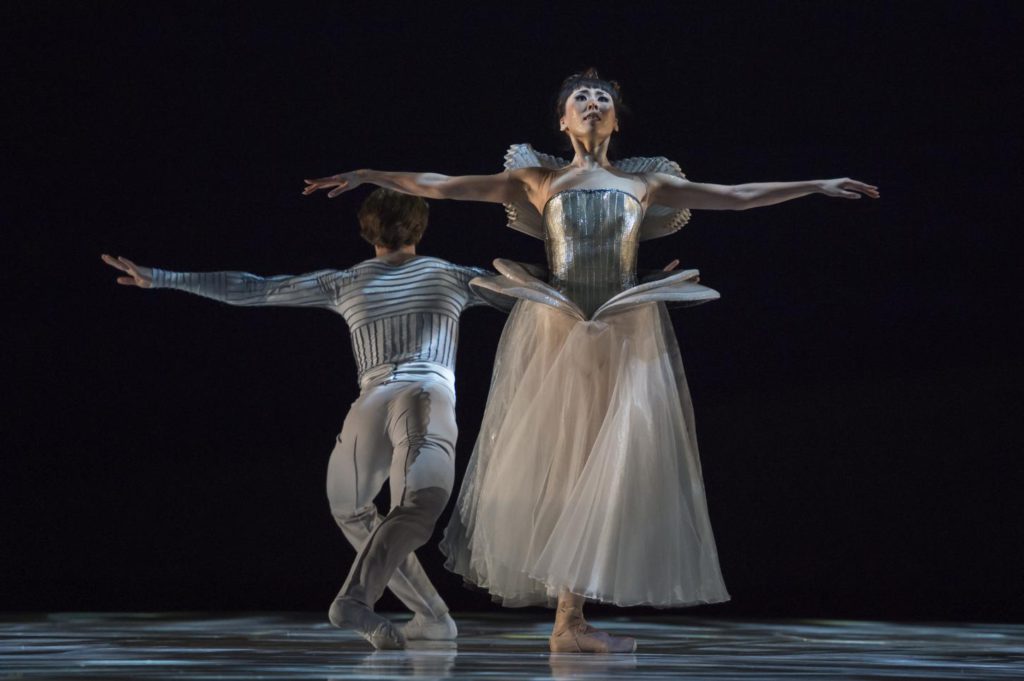 dormant” in a storybook in his living room. Entranced by the fairy tale, he becomes the prince. The wall of huge white books in his home becomes the screen on which the Lilac Fairy shows him a vision of the princess’s gaudy court; his ball-shaped table lamp turns into a crystal ball for scrying.

The first act depicts the world of the prince, a cold, black, metallic universe. His mother is Carabosse. We don’t get to know if she is an ogre, as in Perrault’s tale, but given her overlong fingernails, which she either uses as pricking spillikins or daggers to keep her husband and son under control, she certainly is no peaceful vegetarian. Nothing in her robe hints at her royal status. Because she wears one half of a black crinoline, she seems female, but what to make of the two respectable black horns on her head? The king is a wimp, clad in silver latex. His stiff, metal cloak, in which he 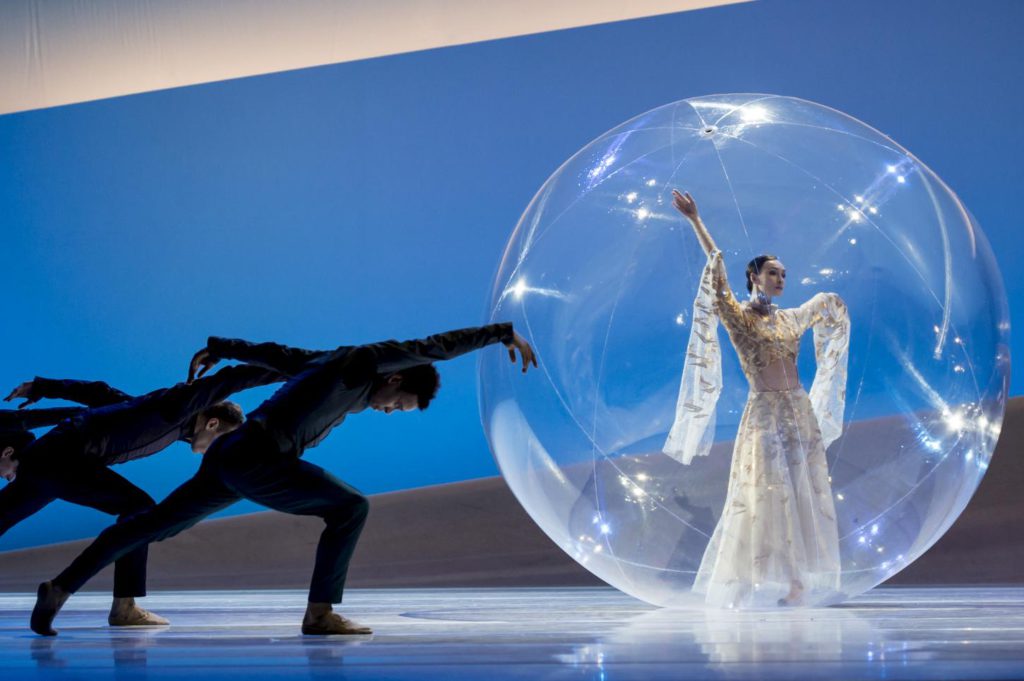 squeezes himself like in a cage emphasizes the burden of reigning. His court society resembles wind-up dolls in armor, stiffly striding along. It is little short of a miracle that the prince isn’t stricken by some kind of behavioral disorder.

The second act introduces us in the world of the princess, a ludicrous royal household in no less alarming socio-psychological condition. The court, wearing a daring combination of various kinds of pastel, hops around in a silly mix of jumping jack and chicken dance, far from echoing any kind of danse d’ecole. General attention revolves around pregnancy symbolized by balloons the size of handballs attached to the women’s bellies. Strangely, they resemble the prince’s crystal ball. Maybe because looking at the progeny forebodes the future? 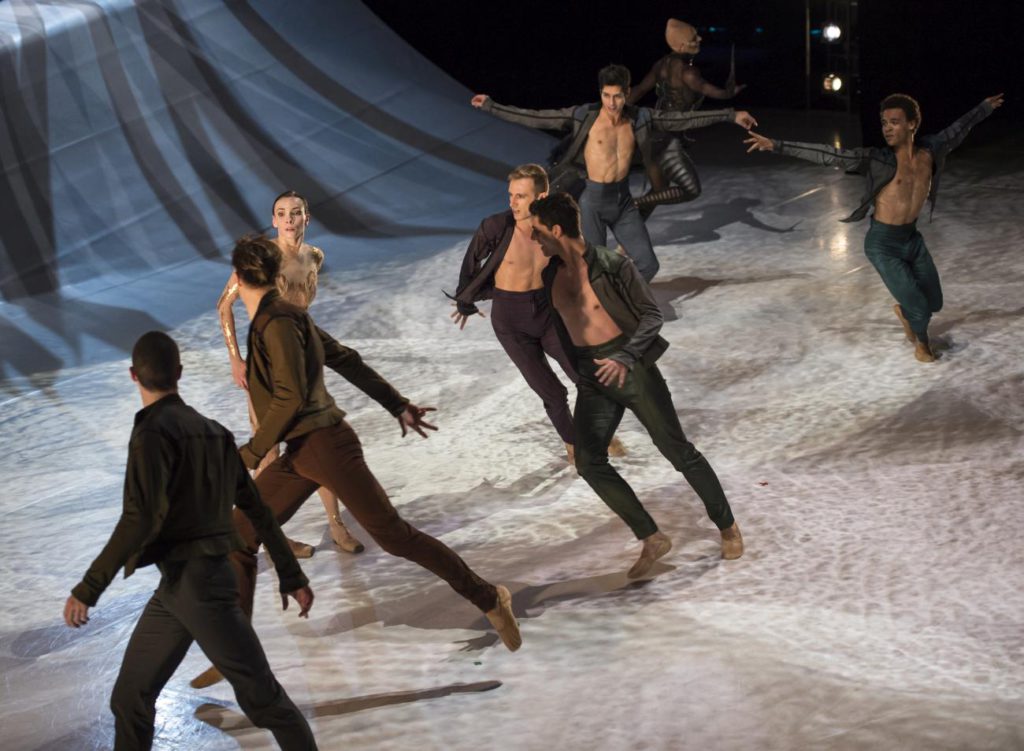 The Queen yearns to be pregnant in vain, though her husband’s overly puffed golden bloomers, crowned by a prominent plush codpiece hint at a fertility rivaling that of the rabbit. However, thanks to the Lilac Fairy, the wonder finally occurs in the form of a dull white balloon – the mega-size ovum – she puts on top of the Queen’s crown. Biology aside, having children is merely like giving birth to a brainchild. The balloon grows, is gayly thrown around and soon later contains a beautiful, mature daughter. Enclosed in her plastic amniotic sac the young princess steps onto stage. An innocent, unawakened beauty her eyes glance in amazement at the world.
First the court meets her with awe as if marveling at a precious exhibition piece, but Carabosse, having mingled with the male court in disguise, quickly heats the men’s mood. Here, Maillot borrows from Basile’s fairy tale. Threat for the princess doesn’t lurk from a spindle but from being molested by men. Her parent’s appearance prevent her from being raped, nevertheless upon this event the spell comes into effect, and the princess falls asleep. Rather than a pompous bed, a brier wood becomes her resting place. Could there be a better prevention from premature sexual contacts? 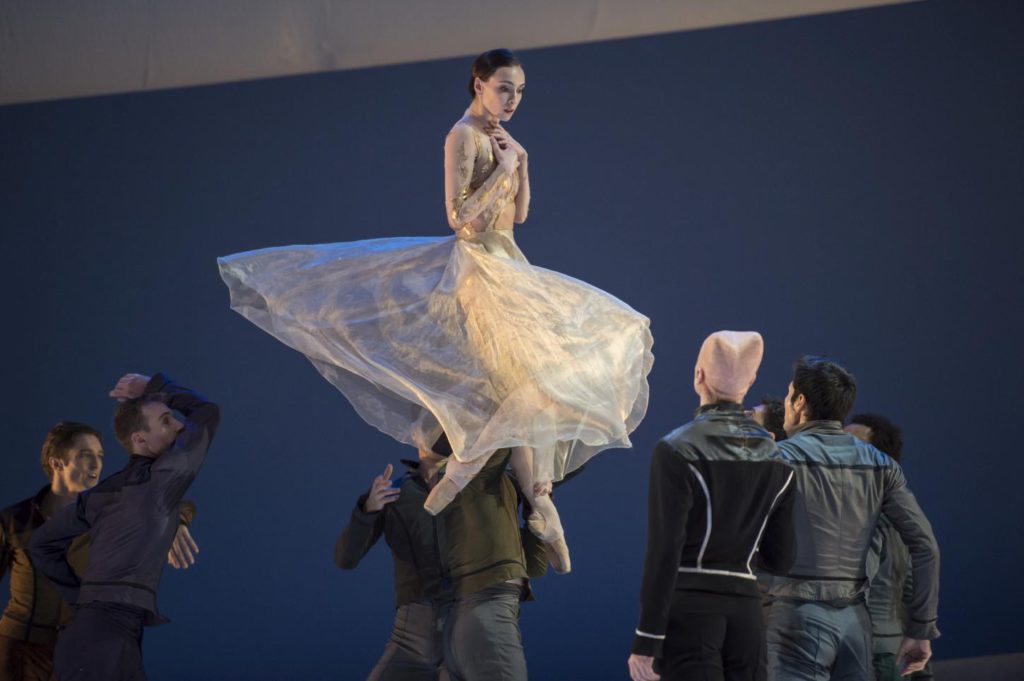 Also in the third act the Lilac Fairy is the string-puller, her three attendants are only decoration without magic powers. After having chucked the whole business down to his father’s feet, the prince leaves home to search for the princess, finds her, but, unlike in Perrault’s story, Maillot’s princess is emancipated and kisses the prince herself. This kiss lasts for what feels like eternity and continues during the ensuing pas de deux which naturally limits the range of motion. One wonders whether instant glue was involved to stick the lips together. Soon a second attempt of Carabosse to overcome the princess in a mass rape fails. Strangely, Carabosse is kissed by the princess too, but for the evil fairy the kiss is lethal. The prince, returning to the real world just before, isn’t involved in the tragic fight. Male bravery appears to falter in the decisive moment. 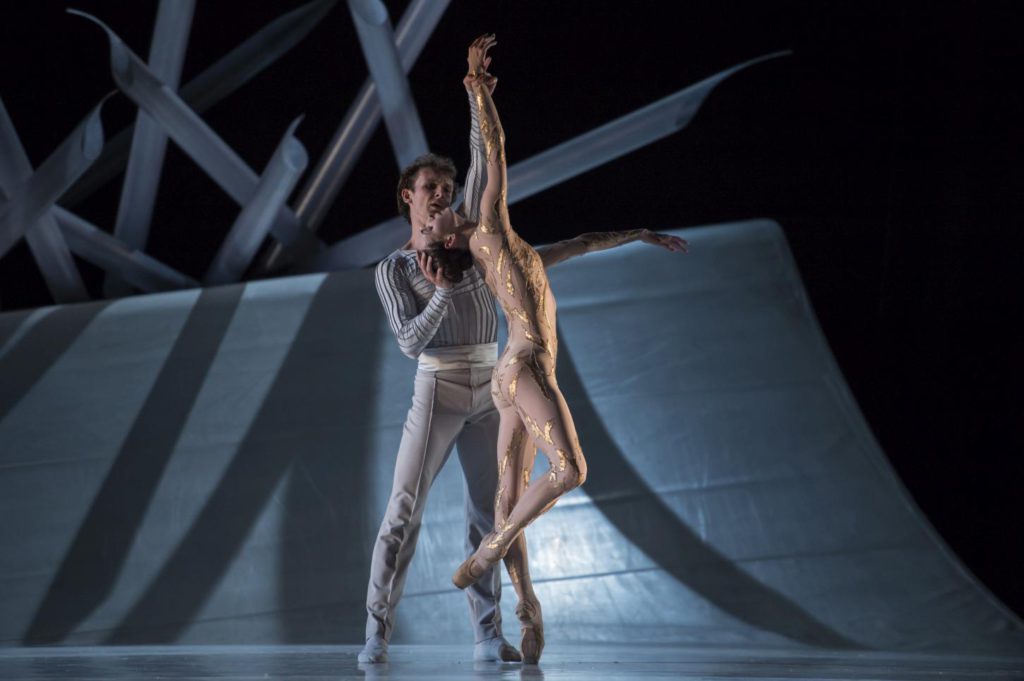 In the end both lovers are miraculously reunited in the young man’s living room. On the backs of the books they see themselves in a video absorbed in a passionate kiss. Finding this more appealing, both disappear amidst the books and immerse themselves in their mental film.

I saw the second and third performance after the premiere, both on the same day. The matinee with Victoria Ananyan (La Belle / Princess), Lucien Postlewaite (Prince), Maude Sabourin (Queen / Carabosse) and Anna Blackwell (Lilac Fairy) was mediocre. Especially the pas de deux of Ananyan and Postlewaite and the interactions at the prince’s court sometimes left one uncertain about the story intended to convey. Moreover, Ananyan’s princess seldom lost her awkwardness, contradicting her role as the beauty. 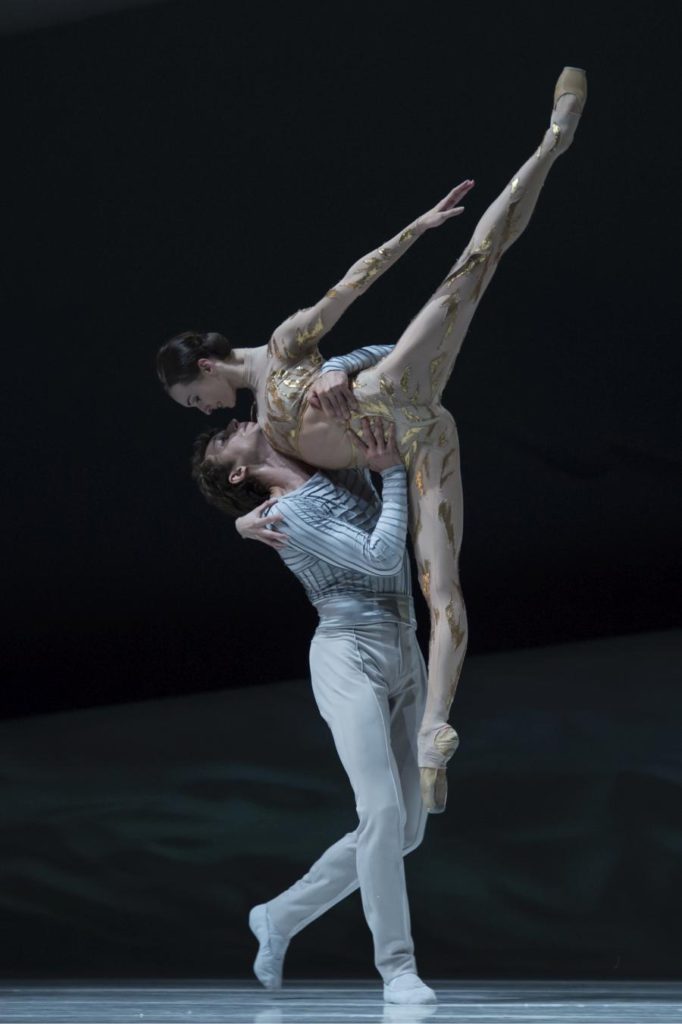 The many children in the audience precisely indicated weak sequences. Restlessness increased, cookies were unpacked, admonitions whispered. Without explanation his daughters won’t get the story, the father sitting next to me said.

The evening performance was far and away superior, its cast stronger in itself, even the Philharmonic Orchestra of Monte-Carlo under the baton of Nicolas Brochot played with more pizzazz. Yet the show’s main asset was the two dancers in the leading roles, one of the finest couples to grace a production, the Bolshoi’s Olga Smirnova and Semyon Chudin. Both are guests in Monte Carlo for four of the total eight performances.

Chudin electrifies the air the moment he enters stage. His acting is so genuine and clear, his presence so strong, that one completely forgets he is playing a role. He was given only one sequence of leaps which made me wish for a bigger stage to give their grace and energy more room to unfold.
Smirnova is a superb dancer. Seeing a ballerina of her caliber restricted to mere walking in a plastic bubble for minutes made me shake my head in regret. Her charm and elegance made the scene exciting even if the role didn’t challenge her potential. Both Smirnova and Chudin are exceptional by themselves, but when together they build a unity like two parts of a whole. All 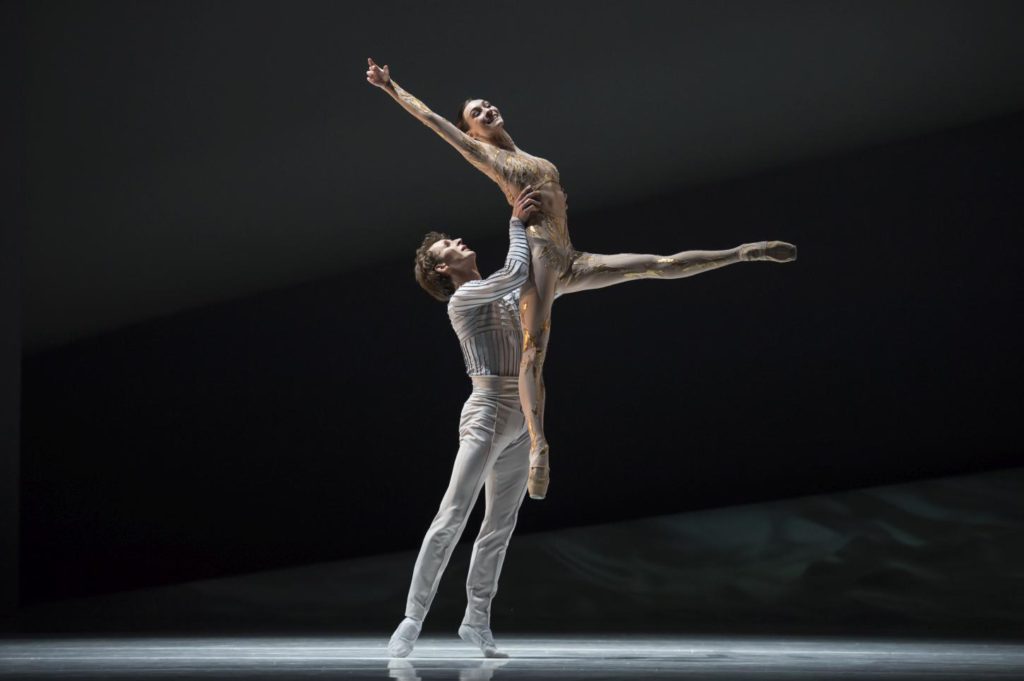 sequences, which dabbled along in the matinee, the two suffused with purpose. They connected parts, added accents, sharpened one phrase and softened another. The piece looked totally different.

In the supporting cast were Mimoza Koike as the quirky Lilac Fairy (virtual pokes on the backbone among her specialties), Christian Tworzyanski as the prince’s father (at least he dared to defy his horrible wife a few times) and Stephan Bourgond as this wife. Casting Carabosse en travestie gave the role the sharp edges it needed and which Bourgond expertly displayed. As the princess’s parents Marianna Barabas danced the happily pregnant Queen, Alvaro Prieto was her caring husband. 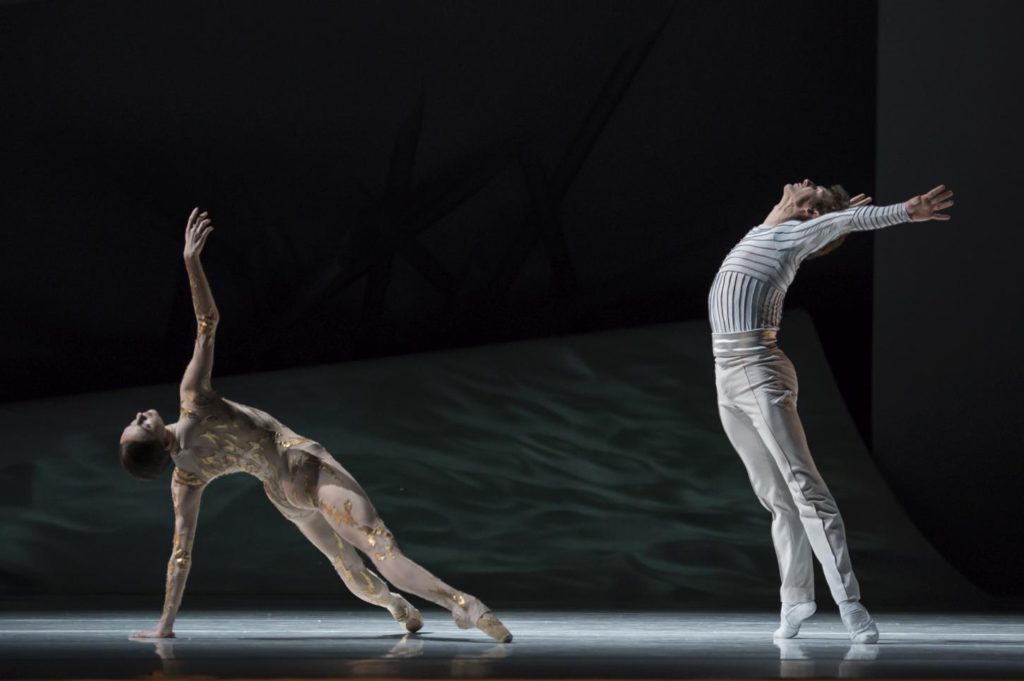