The first day of Munich’s Ballet Festival Week heralded the start of an extended cricket season at the city’s National Theater. Captains of noble descent lead the competing teams. Which of the players – half a zoo plus numerous playing cards – fight for the Queen of Hearts and which fight for the Duchess isn’t always clear. Games aren’t played by the rules in Wonderland.

Alice does not ramble through a facsimile of the Wonderland from Lewis Carroll’s famous 1865 novel. Choreographer Christopher Wheeldon dropped a few of her excursions (the White Rabbit’s home is spared from being demolished, for instance); replaced others (sadly, no lobster quadrille but the waltz in the flower garden was a ravishing surrogate). He also invented a love story as the guiding thread, and a 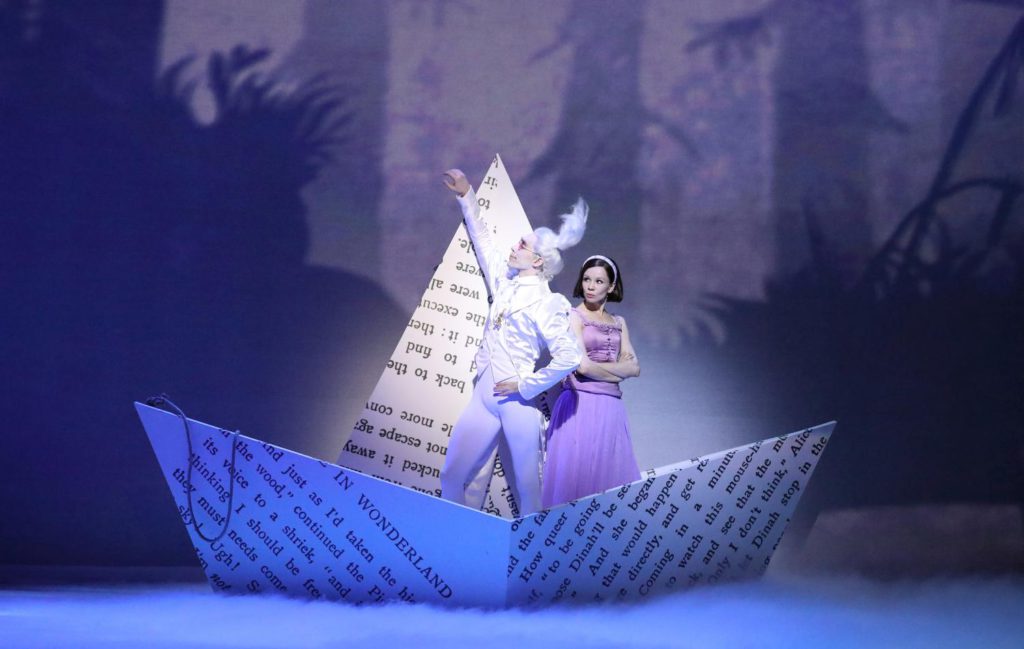 court case in where each and everyone has their little show as the climax.

Alice’s trip to Wonderland begins at the well-ordered household of her family, the Liddells, in Oxford in 1862 and ends at the same place but in the here and now. Love blossoms, namely between Alice and Jack, the family’s garden boy. Alice’s mother, displeased by the budding romance and unbearable in general, fires Jack because of a trifle. But, with the help of Lewis Carroll, a lecturer and friend of the family (in truth – one hardly believes – he is a red-eyed White Rabbit!), Alice is reunited with Jack, also known as the Knave of Hearts at Wonderland. There juvenile infatuation grows into a 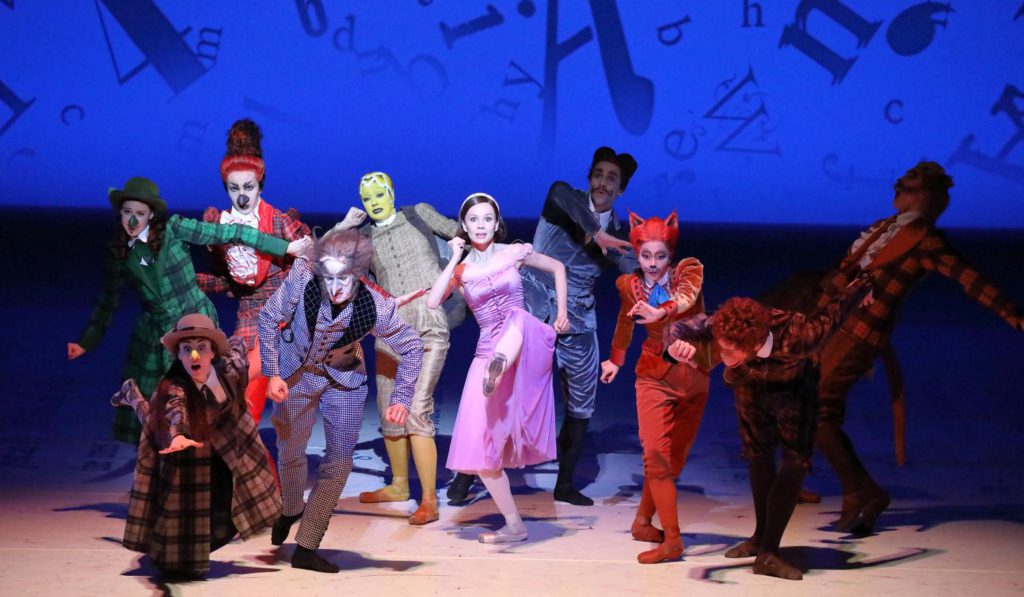 mature romance. But before the happy ending Alice embarks on a series of adventures – a boat tour through idyllic jungle; a visit at a hazardous sausage kitchen; a zappy tap session; an encounter with a sizable Cheshire Cat; and a tumultuous cricket game. She gobbles down psychedelic mushrooms and isn’t generally cautious with food. If she had been more suspicious of her snacks, she might have prevented the rapid shrinkage and growth episodes that afflicted her body. But what shall one do with this girl? She is helplessly headstrong and, well, quite courageous.

Besides, my preferred treat would have been the jam tarts everyone is after. More hardboiled adventurers might fall for the pork sausage from the Duchess’s kitchen. Guaranteed always fresh and peppery. I bet every Bavarian master butcher would be envious of the well-fed pigs the Duchess’s cook puts through the meat grinder.

Anyone who wants to realize the dream of Wonderland has to dip into one’s own pocket. I do not even want to think about the costs for this endless tunnel from the Liddell’s garden to the royal realms of the Queen and King of Hearts. It was dug from the middle of the stage of the city’s most renowned opera house and disguised as a rabbit hole! By the way, has anyone considered the perils? Imagine the next opera performance. What if one of the singers accidentally …?

London was lucky in 2011. The Royal Opera House pooled money with The National Ballet of Canada to bring “Alice in Wonderland” to life. Admittedly, they had to pay Joby Talbot for composing new music (a magical, fantastic sound world with ear worm passages); Nicholas Wright for trimming the storyline (meanwhile spanning not over two but three acts); Bob Crowley for designing the set and the costumes (overwhelmingly resourceful and done with much love); John Driscoll and Gemma Carrington for the fascinating video projections; Toby Olié for creating the puppets (Cheers for the Cheshire Cat and the flamingo cricket bats!) and Natasha Katz for proper lighting. The Bavarian State Ballet only needed to copy existing designs, but still, this Wonderland adventure is pricey.

But costs don’t matter when feeling the audience’s excitement, when hearing their delighted laughs and the animated debates whether the dozily rodent at the Mad Hatter’s tea party was a dormouse (yes) or a marmot (no). The elation of the crowd after the performance and, above all, the joy the dancers had, transcended financial considerations. The production is truly marvelous!

Adopting this mammoth production also was a challenge as some roles bear the imprint of exceptional dancers of The Royal Ballet. Originally, Sergei Polunin danced Jack / The Knave of Hearts. Munich’s Vladimir Shklyarov put on a happy smile and performed flawlessly but he could not match the ease, perfection, and sweet charm that Polunin brought to the role. Shklyarov, whose neck looked shortened under the ruff 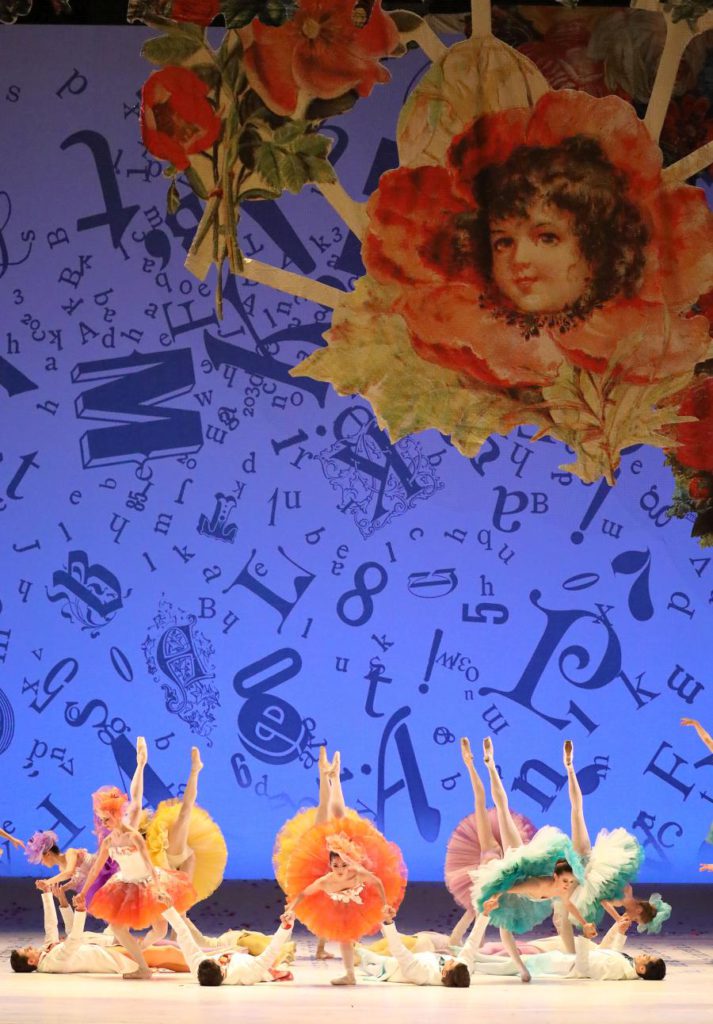 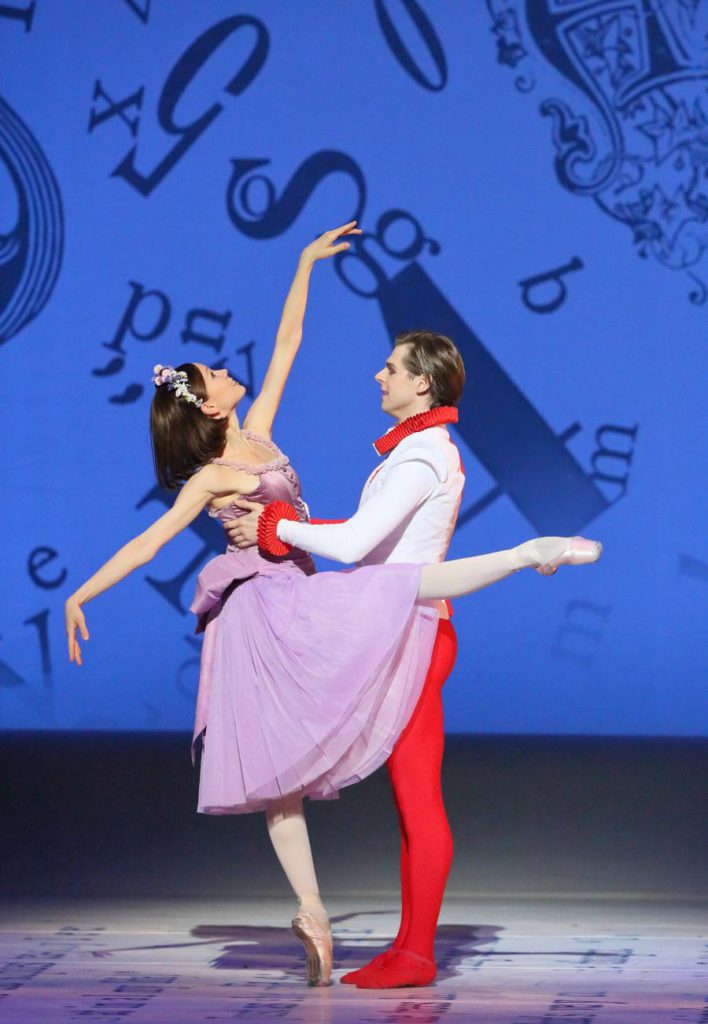 collar of his costume, seemed to be tense at times. He was most convincing in his final pas de deux, dancing relaxed and naturally in jeans and T-shirt. Maria Shirinkina’s Alice was flirtatious and sulking, inquisitive and enraged, playful, resolute and fond. Most of all she was brave. Shirinkina seemed thoroughly comfortable as the young heroine as if she and Alice were one in the same. The light emanating from Shirinkina’s face seemed to come from inside her.

Javier Amo doubled as Lewis Carroll / The White Rabbit. I was skeptical as the bar for this role was set high by Edward Watson, London’s White Rabbit. But from the moment Amo disappeared in the rabbit hole he left me stunned. Such a nibbling

mouth! His bewilderment, his fidgeting, his nervously scraping leg! Supposedly a gruff commander the White Rabbit was in fact chicken-hearted. And good-hearted. When I saw Amo sit on the park bench in the last scene, vigorously scratching his head behind his ear while cheerfully grinning, I was glad that of all roles he was dancing this one. He was fabulous.

I was likewise glad for Séverine Ferrolier who had told me in an interview last season that she would love to dance the Queen of Hearts before ending her dancing career. Here she was. Ferrolier’s Mrs. Liddell was less mean as Zenaida Yanowsky’s in London, but in exchange more attached to handsome men. Ferrolier’s prime moment came in the

spoof Rose Adagio, which was side splitting. From then on all restraint was gone. Ferrolier’s Queen was so malicious, quick tempered and eager to be flattered that one didn’t need to wonder about the permanent dour face of her pathetic husband (Norbert Graf). The cast list didn’t mention the names of the four awe-stricken suitors in the Rose Adagio, but they, too, delivered brilliant slapstick.

Matêj Urban was hilarious as Duchess. Her devastating glances, grotesque grimaces, and tit for tat-outbursts were scary but, seeing her eagerly panting for a sexy man or sweets, one got a glimpse of her playful nature. Blithely, she played out her female charm in coquettish hop, which teasingly revealed her underwear. Jam tarts were her favorite, but she made such a fuss after finally having snatched one that she not even could stuff it in.

Much too beautiful to be wasting away in the kitchen was the old hag’s cook (Mia Rudic). She swung her cleaver so fiercely that I prayed it would never slip her grip.

A master task was given to Jonah Cook. He was the Mad Hatter, the prankster with the sinister touch. Actually, Mad Tapper would be a more fitting name as Steven McRae, world class tap (and ballet) dancer of The Royal Ballet, had made the role a tap showpiece. “I do really think he is bonkers. (,…) And I just really try to tap into that”, McRae said as he worked on the character. Currently, no one on the ballet stage is able to match the quick steps McRae can fire off. Cook by far surpassed what I had expected. Bravo! This was quite an achievement.

The two companions of the Mad Hatter were the March Hare (Stefano Maggiolo) and the Dormouse (Madeleine Dowdney). Always sleepy, the dormouse used every chance for a nap. But how could she jump about in those plushy bedroom slippers anyway?
Henry Grey was the exotic Rajah at the Liddell’s garden party and the sensual Caterpillar crawling among Wonderland’s mushrooms. Although appealing to the Duchess, he should intensify his seductive wriggles. Hadn’t he just smoked some stimulating stuff?

As the Queen’s and Duchess’s footmen, Fish (Marco Arena) and Frog (Konstantin Ivkin) outdid each other in exchanging formal acts of courtesy. Krzysztof Zawadzki was the royal Executioner falling in love. Vera Segova and Marta Navarrete

Villalba danced as Alice’s sisters. Wentao Li, Vladislav Dolgikh and Alexander Omalchenko were the Queen’s agile and diligent (but hapless) Gardeners. The corps’s flower waltz needed more flow and froth, whereas the Playing Cards flipped and turned snappily. Given their tour en l’airs, each of the men must have been a joker card.

The cute little hedgehogs (students of Munich’s University of Music and Performing Arts) and the lovely flamingo-ladies caused murmurs of delight. A nod to the invisible hands who made the Cheshire Cat magically fly.
Only one tip for the next trip to Wonderland: If you don’t want to pick up the sweets from the floor, carry the tart plate straighter!
Myron Romanul and the Bavarian State Orchestra added a bit of extra weirdness to the first bars before sailing through the score with high flags.