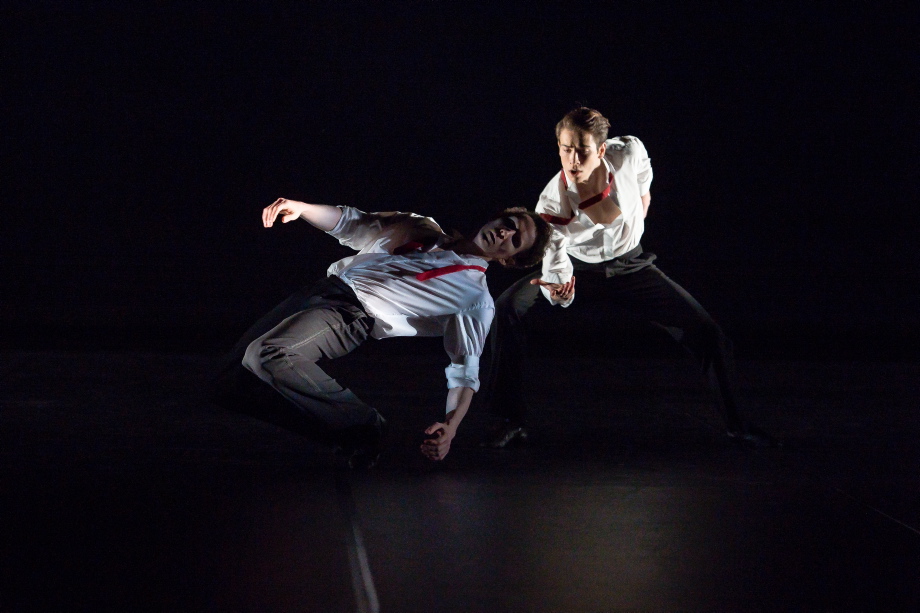 Twelve young choreographers presented their works to the public as part of this season’s two Noverre Evenings – Stuttgart’s platform for aspiring choreographers of dance. Two of the choreographers are female. Two of the ten pieces are collaborative works. Seven originated from within the ranks of the Stuttgart Ballet, and three were created by individual dancers from Lyon, Munich and Mannheim. Notably, none included point work. The quality of the works varied, but each was warmly applauded and some raised enthusiastic cheers.

One of the pieces with real punch was “Fraternal | Stories” by Alexander McGowan and Enes Comak. McGowan created for Noverre in 2014, while Comak is a newcomer. They danced their creation themselves, depicting two pensive men in white 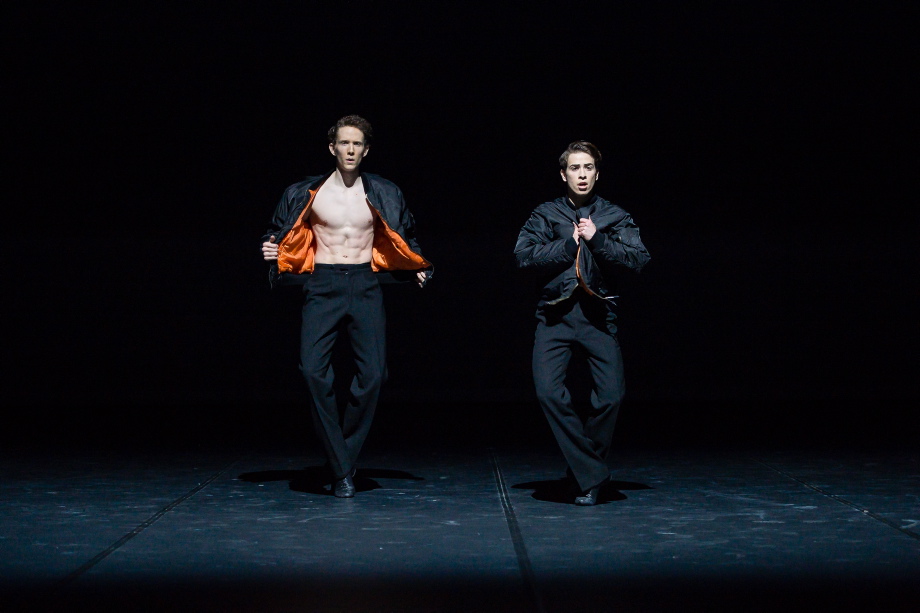 shirts and black pants strolling through a smoke-filled space lit only by a few stripes of hard spotlight from the sidelines. Their quirky moves, which disrupted their otherwise sleek mannerisms, were evocative of white-collar workers getting their freak on after hours. In the piece’s 2nd part, McGowan and Comak returned in dark bomber jackets with orange inner lining, worn over bare upper bodies, and delivered a hip break dance routine.

Strong, too, was Pablo von Sternenfels’s choreographic debut, “A Drop of Ocean”. The solo, danced by him, featured live accompaniment by saxophonist Santiago von Sternenfels (Pablo’s brother) and Fuensanta Mendez Lecomte playing string bass and singing. Music and dance livened up slowly. The saxophone first sounded like a door with squeaking hinges, gently moved by the wind. The string bass hummed in deep, singular tones; then the musicians gradually entered jazzy tunes. Mendez Lecomte, who seemed to have an especially strong mental connection with von Sternenfels, later broke into poignant singsong. 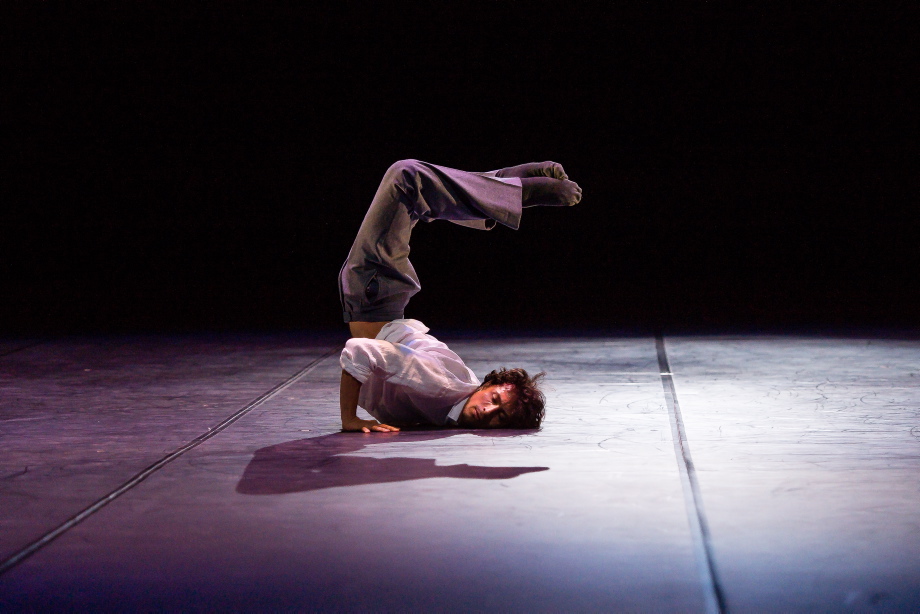 What did the music do to von Sternenfels? As if in a trance, he traced the lines of sounds with his fingers and floated in a squatting position from left to right like a balance beam, weighing the music. He seemed to catch the sound in the air, molding and kneading it; then, a single saxophone tone hit him in the chest like a forceful wave, pushed him backwards, ran through his body and brought him back to a squat. Tones seemed to circle in his mind like bees around a honeypot. Despite its simplicity, the music evoked complex movements. Were we shown the variety of ways in which a mind can interpret music? 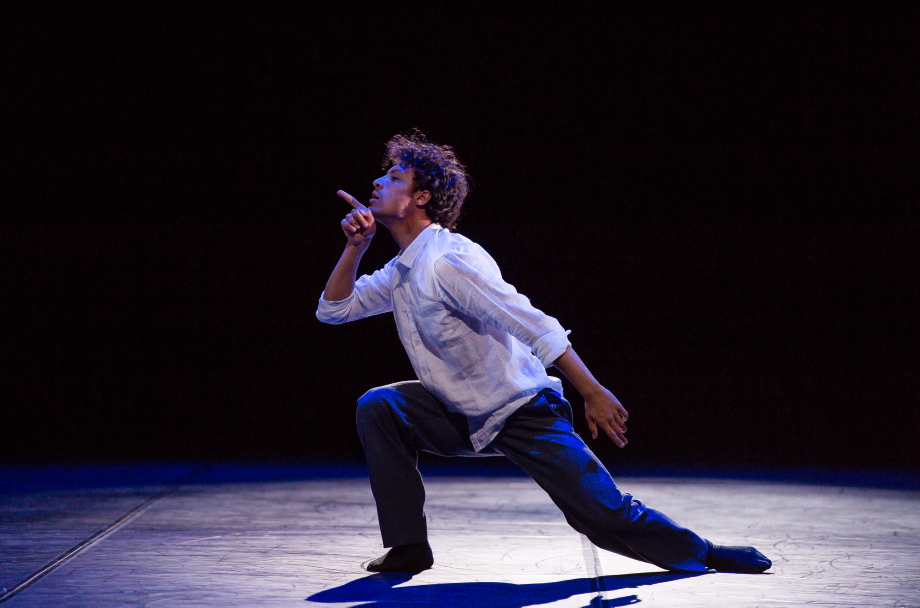 The evening’s show-stopper was by Dustin Klein. Klein, who dances with the Bavarian State Ballet (and has already choreographed a few dance pieces), couldn’t be present in Stuttgart on the first evening. He had to replace a colleague as Mad Hatter in “Alice in Wonderland” at home in Munich. Did Christopher Wheeldon’s piece unleash Klein’s knack for creating hilariously funny roles? In any case, his “Wer ko der ko” lived up to its title – a Bavarian idiom roughly meaning “If you’ve got it, flaunt it”. Put two men – Nikita Korotkov (stoic on first sight but a sly dog) and Ilia Sarkisov (smart and chummy) – both ex-dancers of the Bavarian State Ballet – in jeans and plaid shirts onto a Baden-Wuerttemberg stage, turn on a squeeze box and the audience will have great 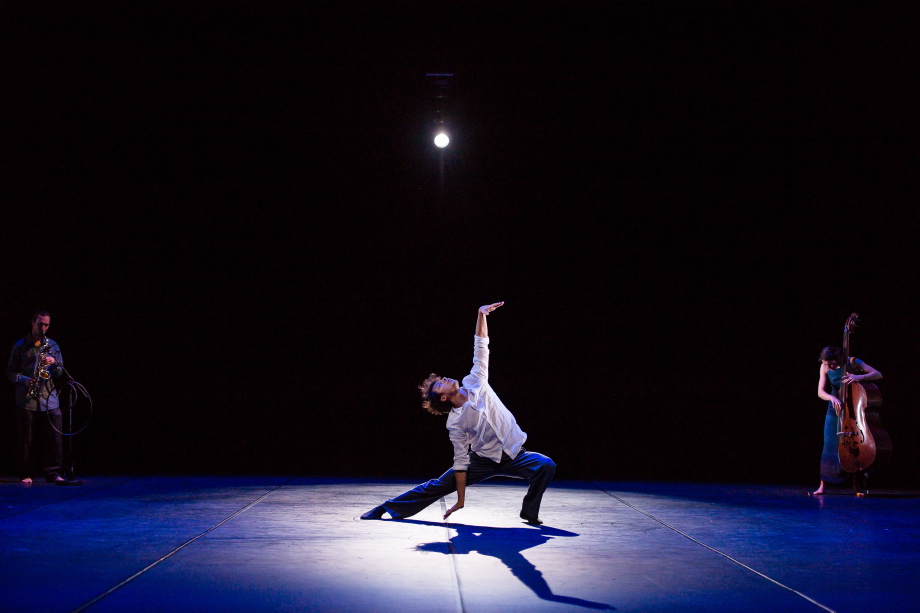 fun right away. Korotkov and Sarkisov, in high spirits and visibly enjoying their show, served a side splitting hybrid of balletic spoof, sexy hip swings and a Bavarian folk number – including dancing the Schuhplattler. At the end of the piece, each of them emptied a beer bottle in one go before toddling off.

Klein abstained from flat jokes. His mix of comedy, chumminess and nonchalance was refreshingly entertaining. Birgit Keil and Vladimir Klos of the Baden State Ballet Karlsruhe must have thought the same. They invited Klein to present “Wer ko der ko” at their ballet gala at the end of May.

The following piece, “Room 29” by Robert Robinson and Adam Russell-Jones, needs to be seen again to allow a fair judgment. Its deadly serious atmosphere clashed so much with the exhilarated mood of the previous piece that it felt like 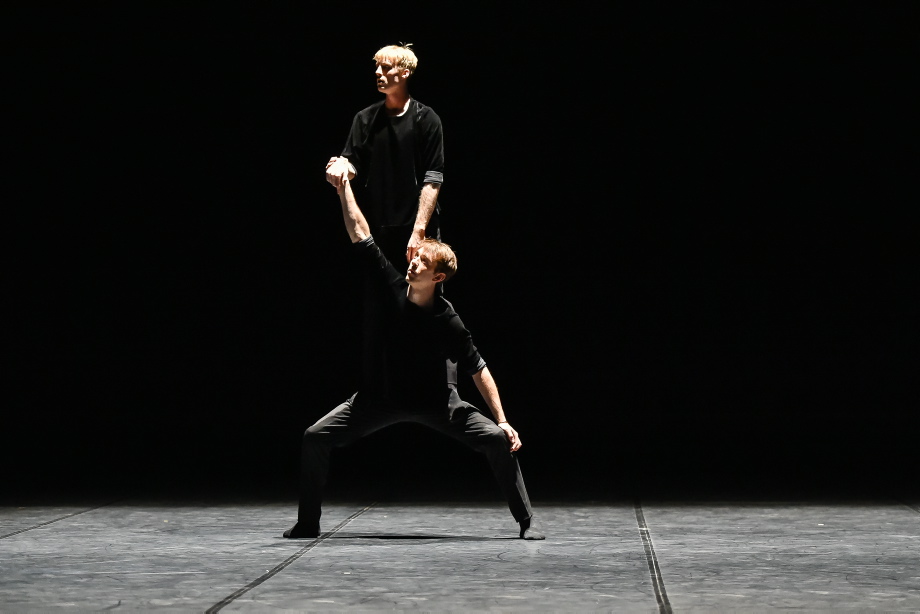 having a bucket of ice water poured over one’s head. “Room 29” is based on the story behind Chilly Gonzales’s and Jarvis Cooker’s song of the same title. 29 is the number of a room in the showbiz Hollywood hotel “Chateau Marmont” where glamorous, bittersweet and sad events took place. Robinson and Russel-Jones opted for picking up on the glum parts of those. They danced their duet themselves, contrasting slow-motion movements with nervous fidgeting. Black costumes added to the atmosphere of emotional fragility and existential loneliness. The song’s English text might have illuminated further aspects of the choreographers’ intentions, but listening to the lyrics distracted from watching the dance. 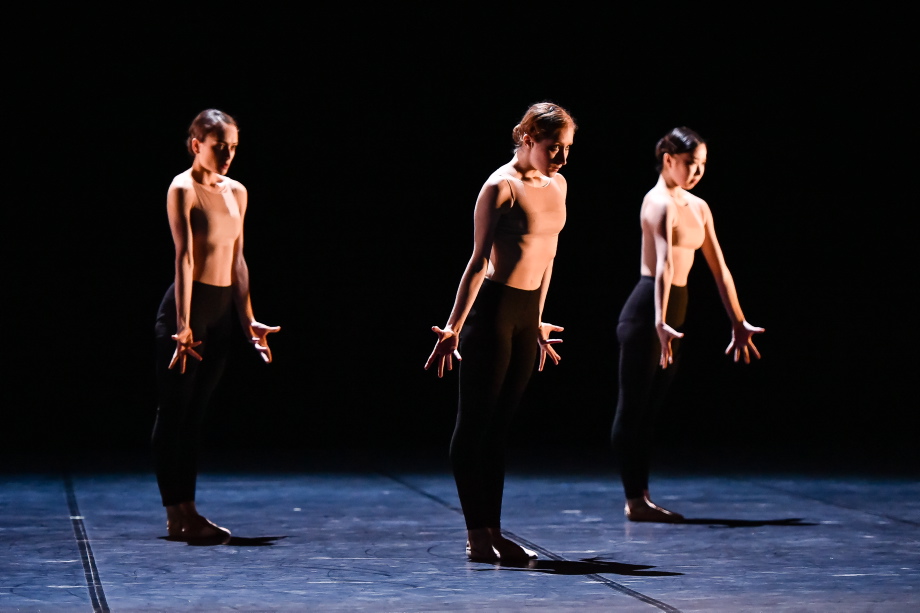 Brazilian Guilherme Carola, a student of the Academy of Dance in Mannheim, contributed “E = mc2”, choreography for four women and one man, set to music by Philipp Glass. Carola had the dancers walk around stiffly as if bearing bad messages. Shoulders were hunched, postures tensed and pas de deux resembled acrobatics. One girl gesticulated fiercely while throwing wild glances. Another girl – the researcher genius? – moved as if physically and mentally handicapped. What kind of light does this cast on intellectual luminaries?
The choreography was influenced by the style of Marco Goecke, Stuttgart Ballet’s resident choreographer. But while Goecke’s dancers look strong even when depicting screwed-up figures, Carola’s radiated negativity and discomfort. 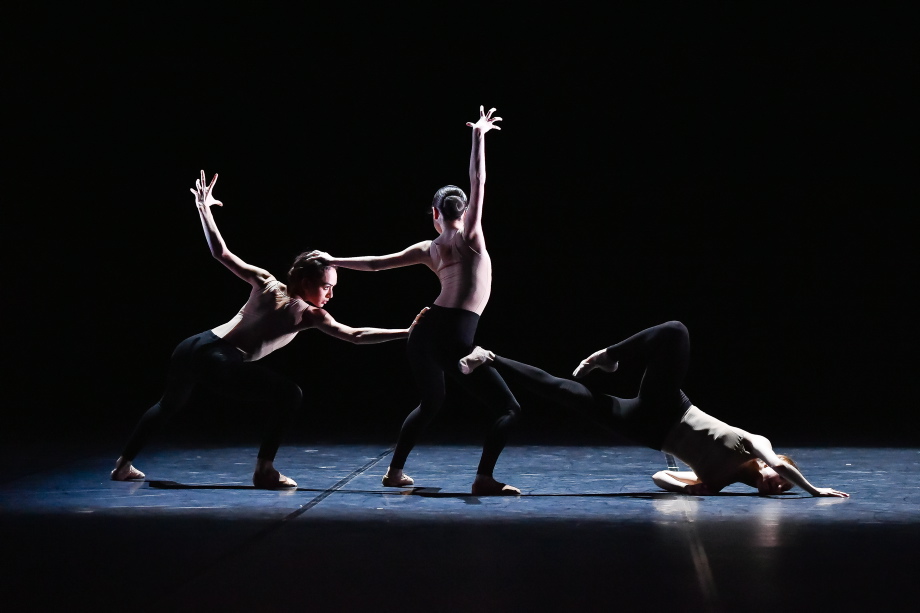 Interestingly, the other piece referencing Goecke came from outside Stuttgart as well – from Tadayoshi Kokeguchi, a dancer with the Ballet of the Opera in Lyon. His “Fences” began with a bare-chested man dressed in simple black who entered a beam of light on an otherwise dark stage and performed isolated arm and leg movements. A Stuttgart audience will quickly notice parallels to Goecke. Other non-Goecke ingredients included individual poses by the five dancers and super slow-motion groupings, in which the dancers either grimaced a broad grin or knotted themselves together in a throng. At one point, they gathered around a dancer and carried her safely away as if she were a stiff statue that needed to be rescued. 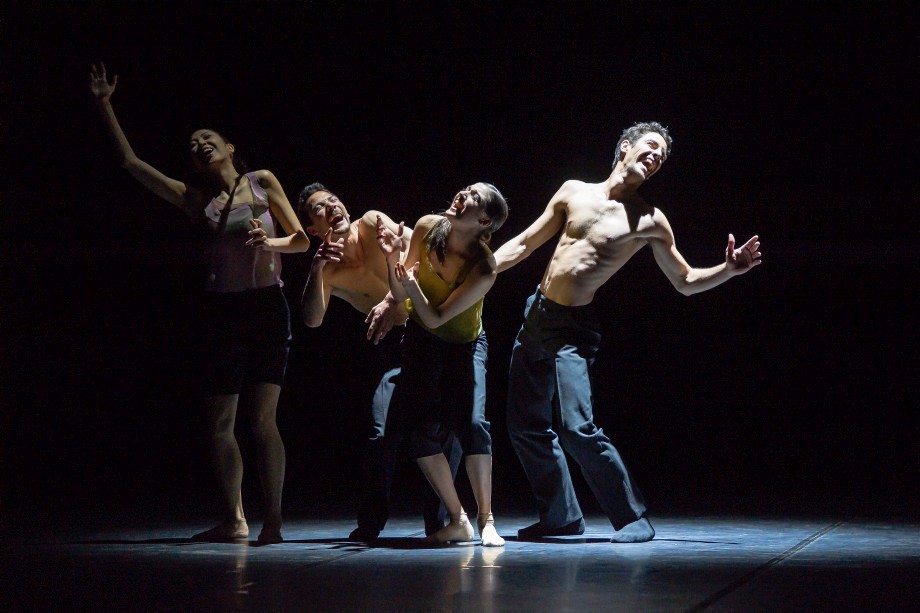 Asked about his opinion on young choreographers imitating a colleague’s style and whether he deems it necessary to have experienced mentors, Hans van Manen recently said in an interview: “Yes, that is how Balanchine began. That is how Robbins began, and also how I began. It’s how everyone begins. It is the most common thing in the world. You should always have examples. You should not be afraid to imitate. Good dancers are good at imitating. Once you can imitate something well, then you recognize and understand the mechanisms of it. Once you know the mechanism, you can personalize it and make it your own. You can take it further. And that is not specific to the art world. That applies to everything, whether you work in a theater or an office.”
No reservations about borrowing then. 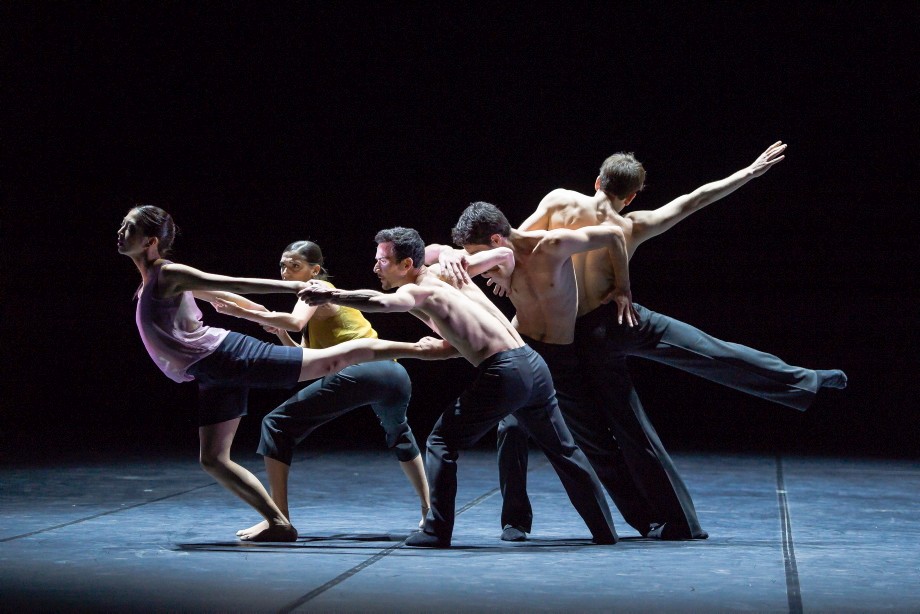 “Venus”, Noan Alves’s choreographic debut, showcases four women with open, flowing hair trying to look like pretty, feminine powerhouses. The piece was under-rehearsed and shallow.
Alisa Scetinina’s duet, “Intact”, is set to tranquil piano sounds that she herself composed. Except for the fixed choreography, it resembles a contact improvisation lab. In a seamless flow of movements, Scetinina and Shaked Heller explored possibilities of partnering through carrying, nudging, pushing, catching and dragging around each other. 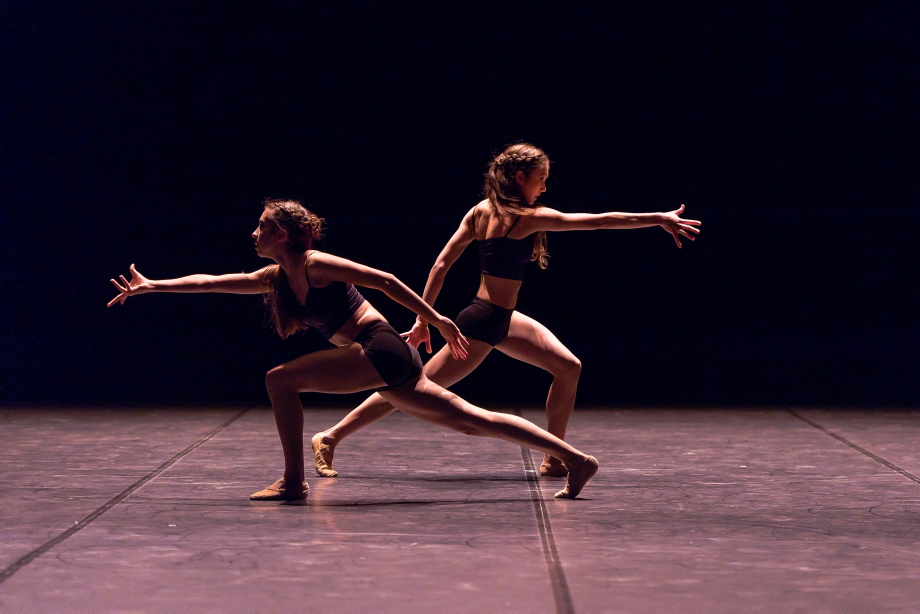 Petit Aurora de Mori already choreographed last season for the Noverre Evening. This year’s contribution, “Devenire anima”, a piece for three men and two women to Arvo Pärt’s “Lamentate” and “Fratres”, has an Asian imprint. Dancers hopped in deep, frozen pliés, hammering the floor with their feet, or lay on the floor, one leg held up with bent knee and flexed foot. Many sequences were danced in sync; groupings had a clear symmetry. Especially effective was a line-up of all five dancers, in which the men and women did movements in opposite directions. The acrobatic lift in the final scene was, by comparison, stilted. At times the choreography looked overly ambitious and seemed to lose its distinctive edge. 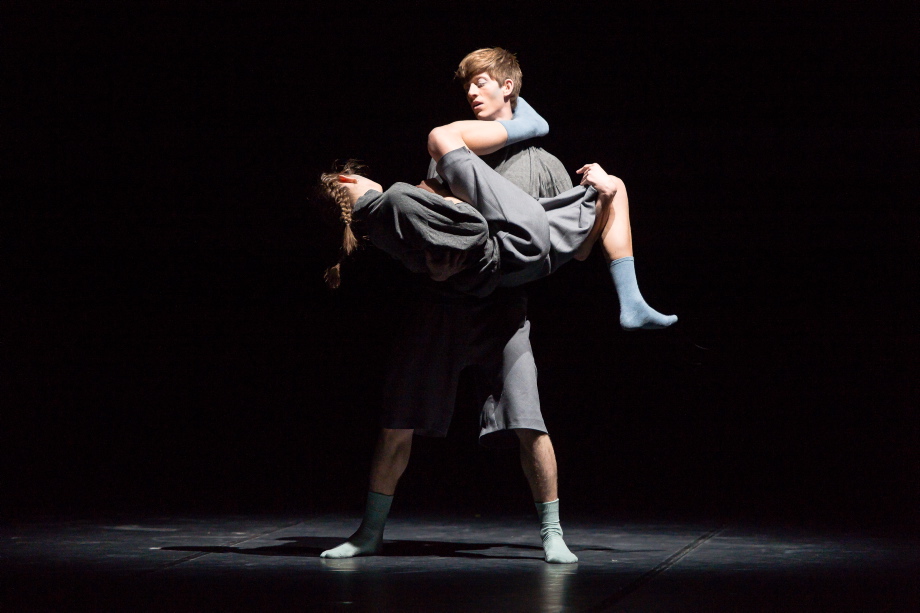 Alessandro Giaquinto based his first choreography, “Elegia”, on the poem “Sono una creatura” by Giuseppe Ungaretti, of which we heard a recorded reading. Even without speaking Italian, one could understand that the verses were about death and described a disconsolate, painful condition. Igor Stravinsky’s somber and melancholic “Elegy for a Solo Viola” underscored the gloomy atmosphere. The cast of three was led by Myriam Simon. Her arms swished like heavy axes through the air, then were rippled by soft, silky waves. She clenched her fists and stepped briskly. At one point, Simon touched her back as if she were in pain. Later her arms seemed to cradle a baby. Moments of rebellion (against the hardship of life? against herself?) alternated with acquiescence. A cone of light seemed to define a sacred space, but was also the place of confrontation with reality.

The nearly 700 seats of Stuttgart’s Schauspielhaus were sold out on both Noverre Evenings. 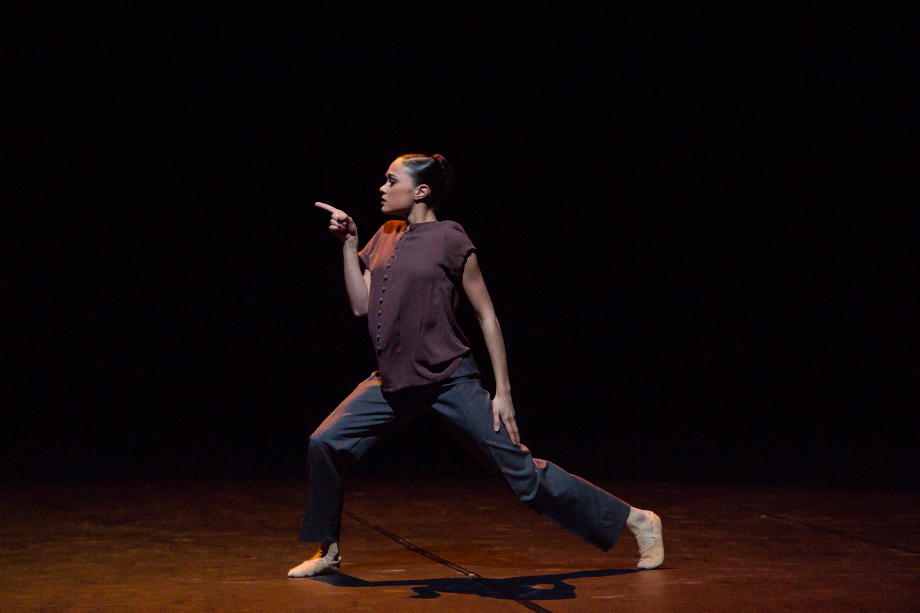