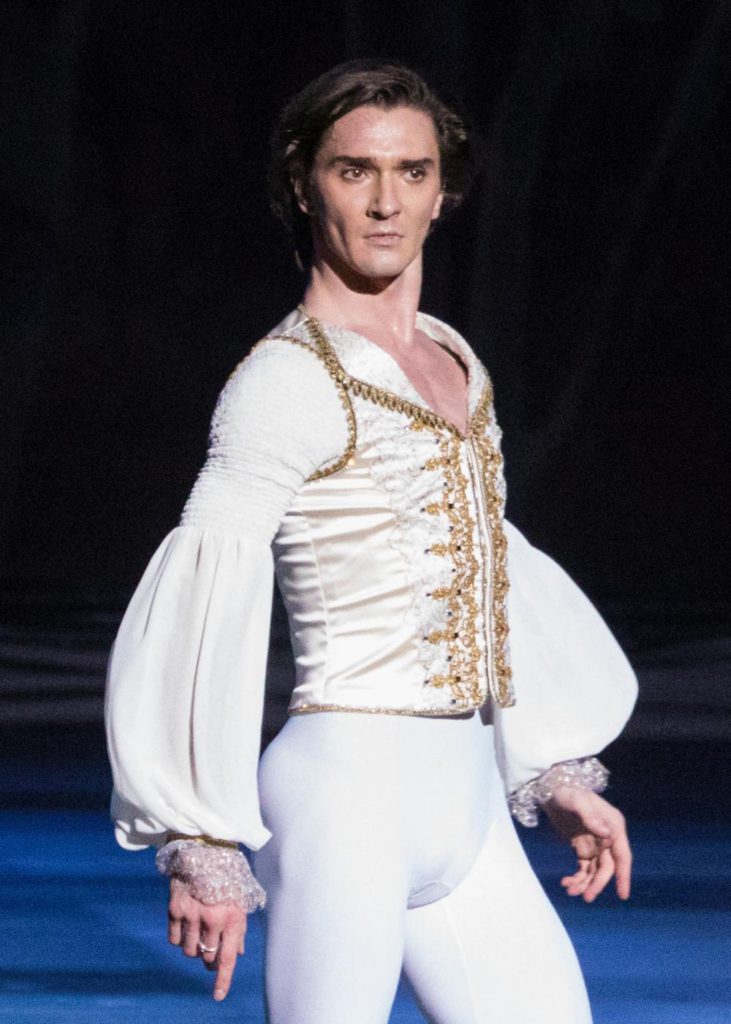 The cross-genre two-acter is largely based in ballet, but draws from drama and opera as well. The work presented major events in Nureyev’s life as flashbacks, but didn’t attempt to follow a chronology or re-narrate his biography. The Christie’s auctions of Nureyev’s estate, organized in 1995 (two years after his death), ran like a golden thread through the piece. Among the visitors to the auction were two veteran ladies, extras of the company, who were greeted with applause. As the auctioneer, the actor Igor Vernik announced the items up for sale, switching fluidly and fluently between English and French. 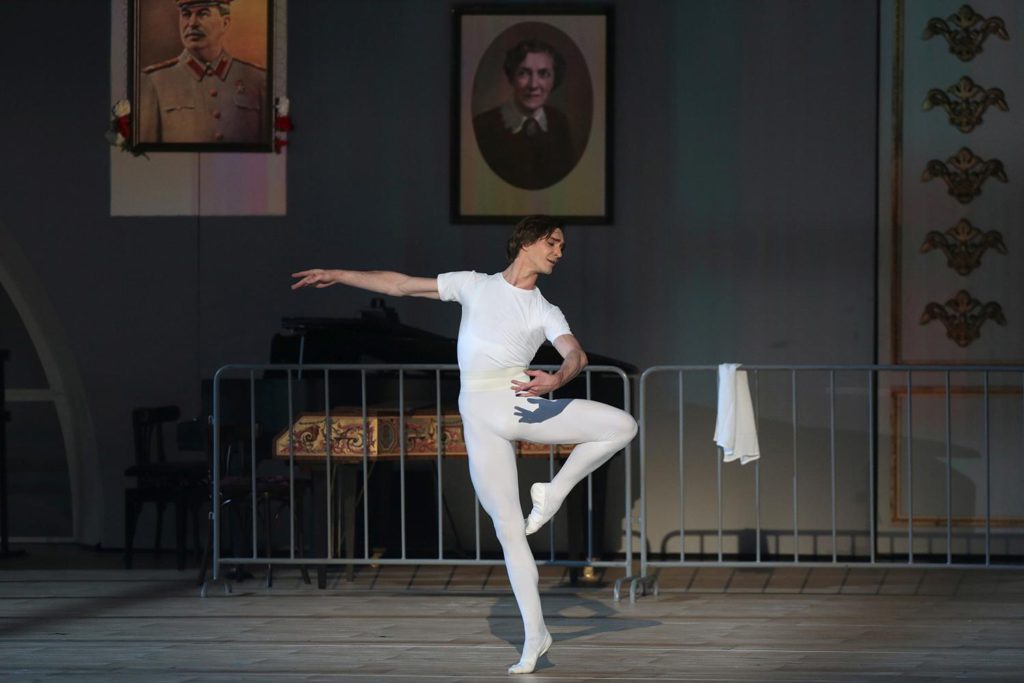 Many of the objects were shown on video projections by Sergei Rylko, some serving as launching points for flashback scenes. For example, a record of the marks Nureyev got in the Vaganova Ballet School in 1956 prompted a scene featuring the graduation performance by the students, the unruly but talented Nureyev (Vladislav Lantratov) among them. His rude behavior made his ballerina (the quicksilver Anastasia Stashkevich) cry, but he was backed up and fostered by his teacher (Viktor Barykin).

Avedon’s famous nude photo of Nureyev, shot in 1968, led to a scene that re-enacted the photo session in which Avedon (played by Vernik) encouraged Nureyev to pose naturally. Another flashback presented the encounter, romance, and eventual parting of Nureyev and Erik Bruhn (Denis Savin). The flashback was accompanied by the auctioneer’s sale of both 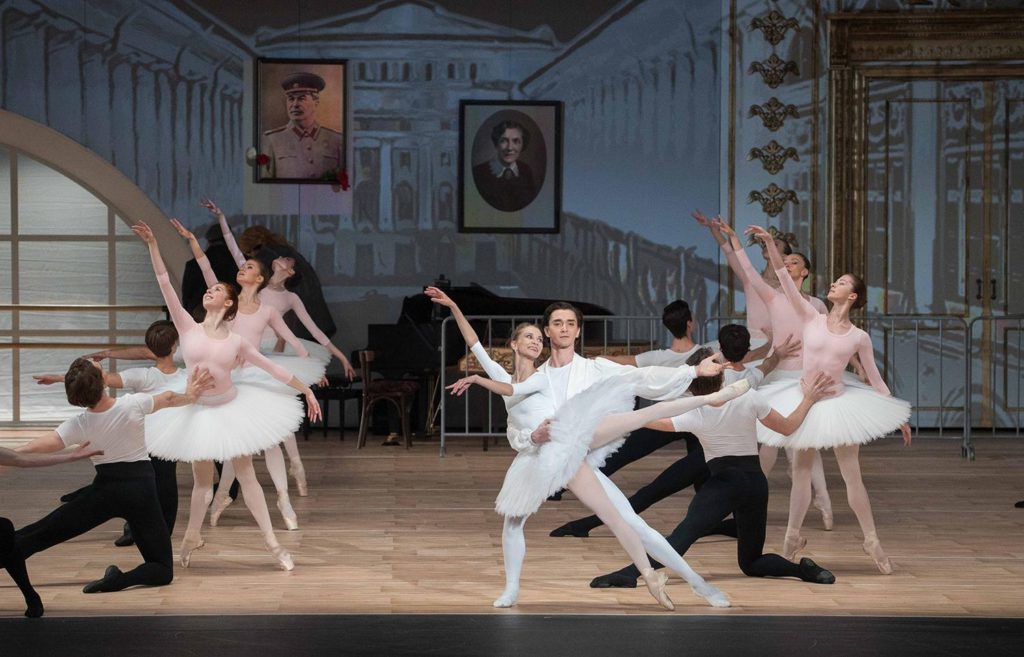 a collection of black-and-white photos of the lovers and a letter Nureyev wrote (but never sent) to Bruhn shortly before the Bruhn died in Toronto in 1986. Savin’s Bruhn was reserved and elegant, sensual beneath the surface, and constantly smoking. Bruhn seemed to dominate the relationship.
While costumes from famous roles were auctioned, Nureyev, aided by a dresser, quickly slipped from one embroidered top into another, rushing from one performance to the next as his ballerinas changed again and again. In between these performances, Nureyev supervised the young dancers who had taken over his old roles. He was busy and he loved it.

The advertisement of paintings of naked men (which raised considerable interest among the all-male visitors to the auction) introduced a surreal procession of Nureyev as an eccentric Sun King adored by his entourage. The crowd consisted of a choir in lavish costumes dripping with golds and reds and wearing red-feathered headdresses (costumes were by Elena Zaitseva), the King’s singer, and several young pages, who later undressed and danced with bare chests as if the auction’s paintings had come alive. 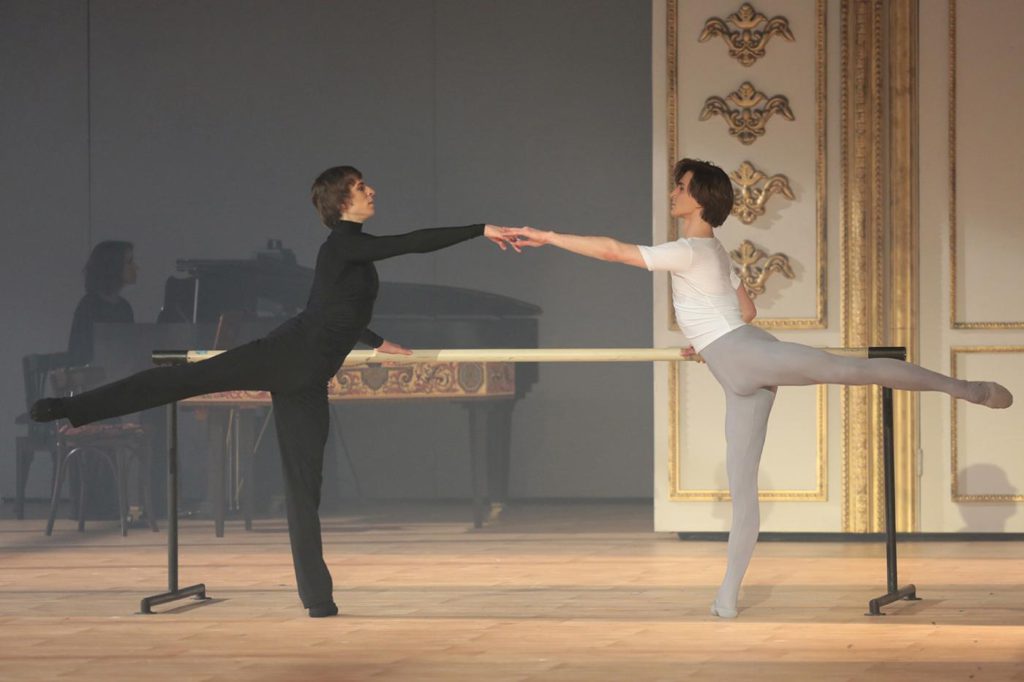 Nureyev also acquired the archipelago formerly owned by Léonide Massine – the Gallos islands off the Amalfi coast of Italy – and spent several weeks there before his death in 1993. When the auction arrived at the sale of this archipelago, Nureyev had become the tragic Pierrot of Glen Tetley’s “Pierrot Lunaire” – although the metal tower he clung to was of a different kind. Moreover, it was rotated by dancers and stagehands. When the Pierrot broke down and lay exhausted on the floor, the young men, now wearing tight black pants and sailor hats (an outfit evoking a luscious gay club), passed him without notice. 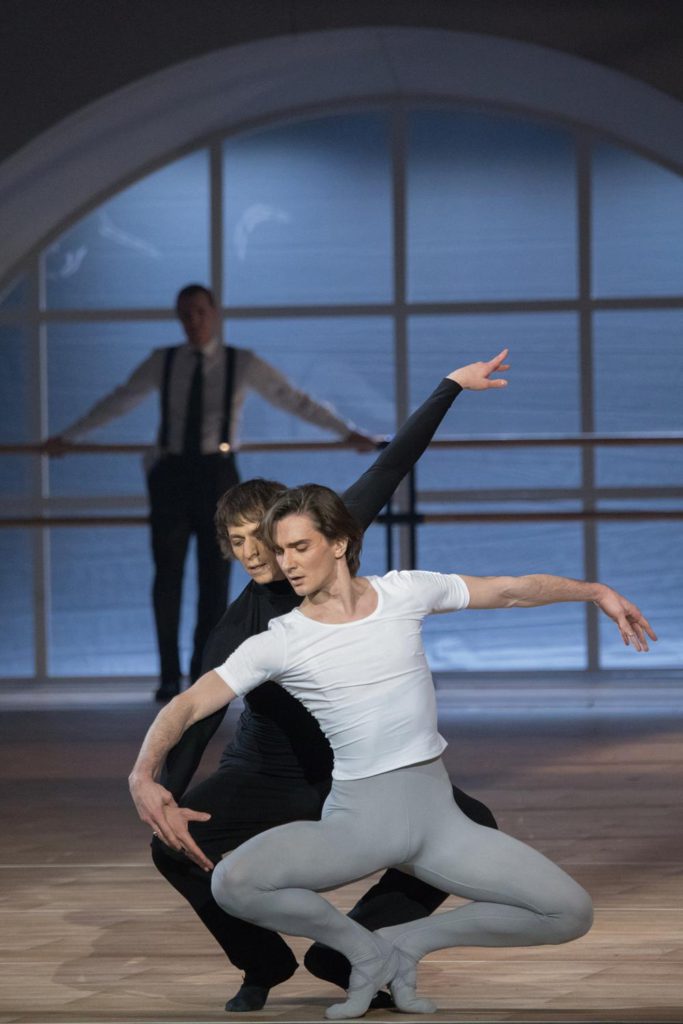 The final scene was haunting. Nureyev, weak, worn, supported by one man and dressed and massaged by two others, took the baton that the auctioneer had just offered for sale, which was “used by [Nureyev] at his debut as the conductor of the Vienna Symphonic Orchestra on 26 June, 1991.” Slowly and stiffly, Nureyev walked to the front of the stage and climbed down the ladder into the orchestra pit, his face tense with pain. It was deadly silent. At the conductor’s podium, he turned towards the audience, motionlessly acknowledged the applause and started conducting the Shadows Act from “La Bayadère”. The Shadows, among them also men, had previously entered, but interrupted their performance until Nureyev raised his baton. Although the music ended, they continued dancing and even though the curtain had closed Nureyev was still conducting.

Intense, too, were the scenes, in which Vernik read aloud letters from pupils and colleagues to Nureyev. Vyacheslav Lopatin danced a contemporary solo to two letters by men, both French protegées of Nureyev, presumably exemplifying the many dancers influenced by Nureyev. The letters were by Charles Jude – former artistic director of the ballet of the Opéra de Bordeux, and Laurent Hilaire, who holds the reins of the ballet of the Stanislavsky and Nemirovich-Danchenko Theatre in Moscow. Lopatin’s solo began slowly, as if sprouting from thoughts or emotions, but gained speed and ended with a rapid pirouette. 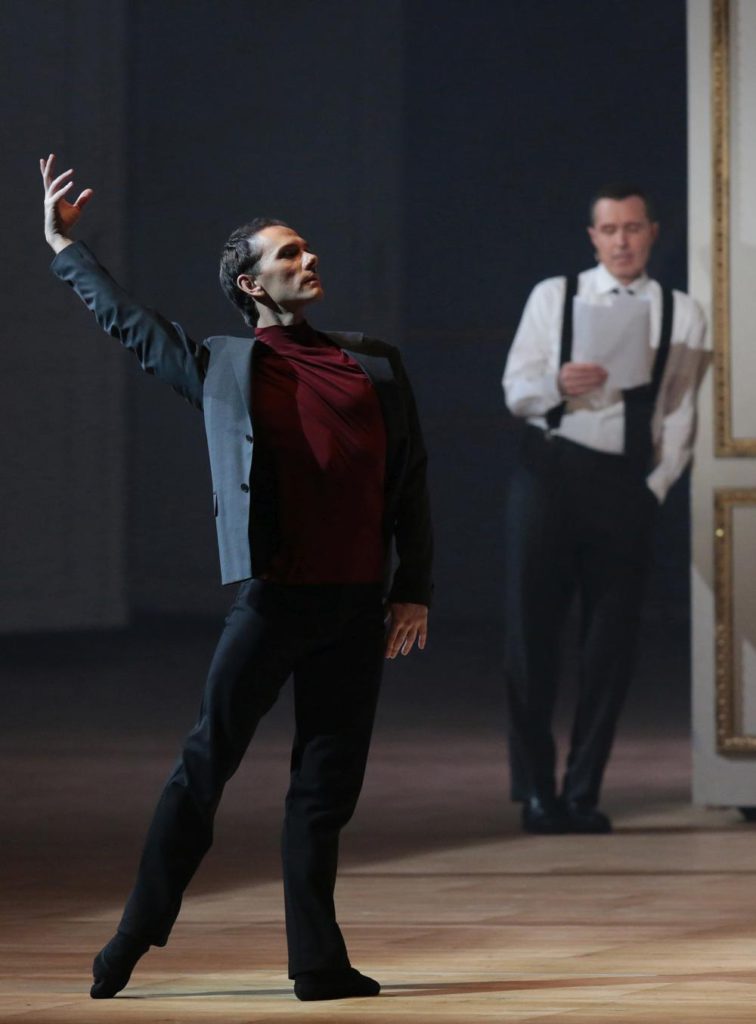 Svetlana Zakharova danced in the second act to letters written by Alla Osipenko and Natalia Makarova, both former partners of Nureyev. Zakharova wore Makarova’s unmistakable head scarf along with a beige top and plain pants. Both solos recalled movements connected to the respective letter writers without imitating them. In fact, the steps were secondary. What mattered was the energy infused into the solos – like the one behind Makarova’s recollection of her first “Romeo and Juliet” with Nureyev: “I was so nervous [that] I got all my entrances wrong – nothing but confusion all way through. But deep in my heart I knew that everything will fall in place at the premiere. And so it did…”
What if these letters were read by the writers themselves at a future performance? Would the impact be even stronger?

Roslyn Sulcas wrote in her review of “Nureyev” in the New York Times that “Mr Possokhov … doesn’t find a convincing physical language for Nureyev to suggest something of his character and inner life. The choreography is balletic and skillful but unmemorable…” She is right. But is it even possible to portray the “God of Dance” in a ballet and get across his magic, sensuality, charisma, and unparalleled talent? Among today’s dancers there is no Nureyev. Possokhov and Serebrennikov’s piece is varied, cleverly constructed, rich in detail, and even critical. It does not whitewash Nureyev’s unpleasant traits – his egomania and abusive tantrums. It’s an homage to one of Russia’s greatest dancers and it was clearly a passion project for everyone involved. More couldn’t have been done. One cannot calculate magic. It simply occurs or it doesn’t. 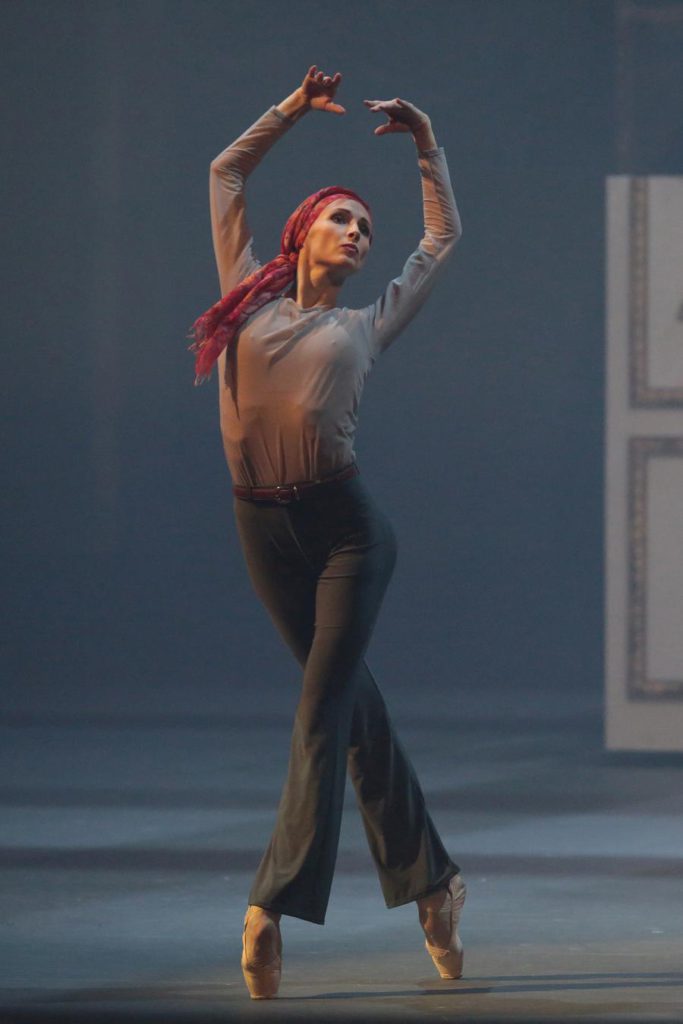 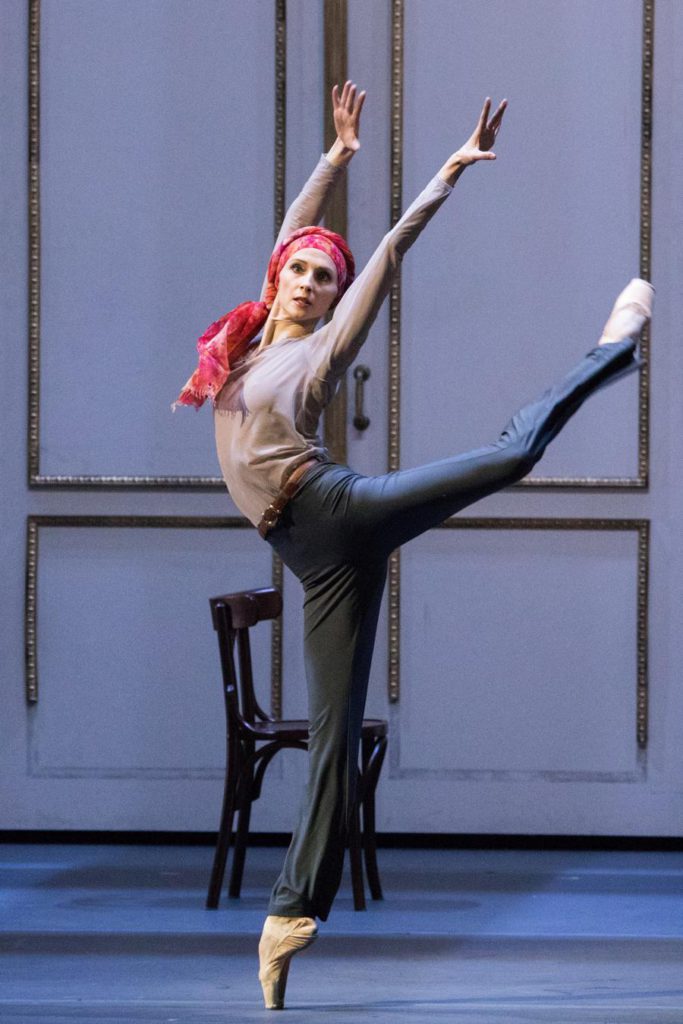 But it did, for example, in the pas de deux of Nureyev and Bruhn. Here, real love was in the air. Most astonishing was the entrance of Margot Fonteyn (Maria Alexandrova) – which wasn’t even an entrance at all. Fonteyn simply appeared center stage together with Nureyev at the moment that the set elements of the auction were removed from the stage. But what a sudden whoosh of energy accompanied her from above! Everything about Alexandrova’s Fonteyn was modest – her simple white dress, her make-up, her conduct. She didn’t play the diva. Flanked by glass cabinets filled with Nureyev’s costumes and situated beneath four rows of noble chandeliers, their pas de deux consumed the huge stage. One might have noticed steps from “Giselle”, “Romeo and Juliet”, “Marguerite and Armand”, and others. Regardless, the dance was grand – grand in its aura and grand in its emotions. If this was the “supercharged excitement and …roiling emotion of [Fonteyn and Nureyev’s] dancing” that Larry Kaplan describes in the program booklet, you can understand why their stage partnership was praised as “epochal.” 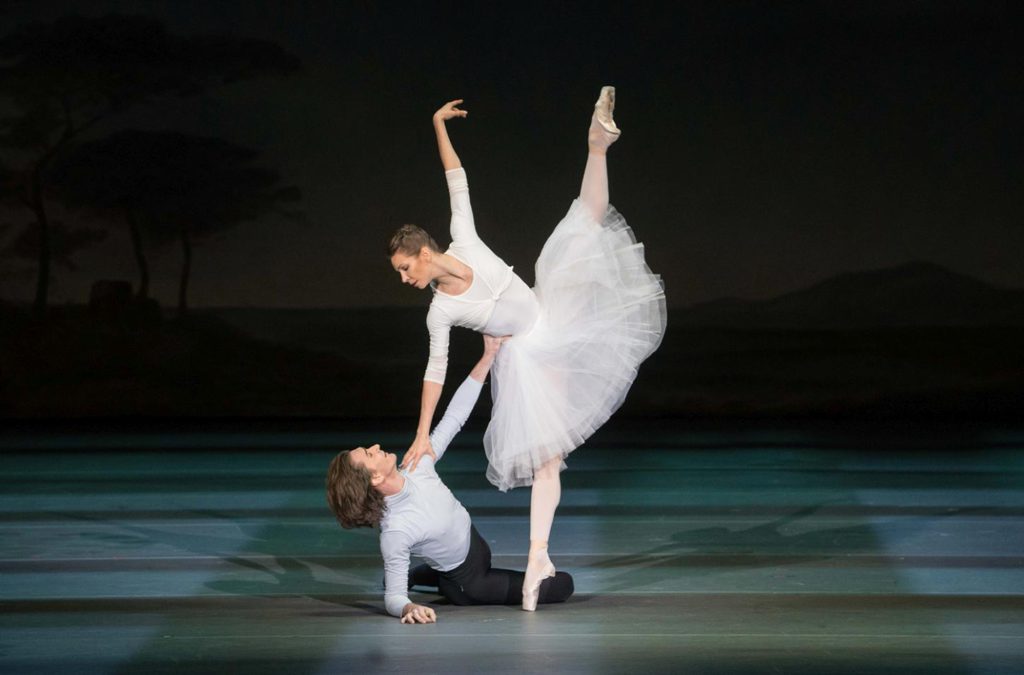 Lantratov is a fine dancer, but can’t impress as Nureyev could. No one can. But Lantratov threw all his talent and prowess into the role and allowed not one bit of ego to show itself. Hans van Manen once said that you get to know an artist’s real character at curtain call. Lantratov was moved by the applause and humbly bowed to his colleagues. 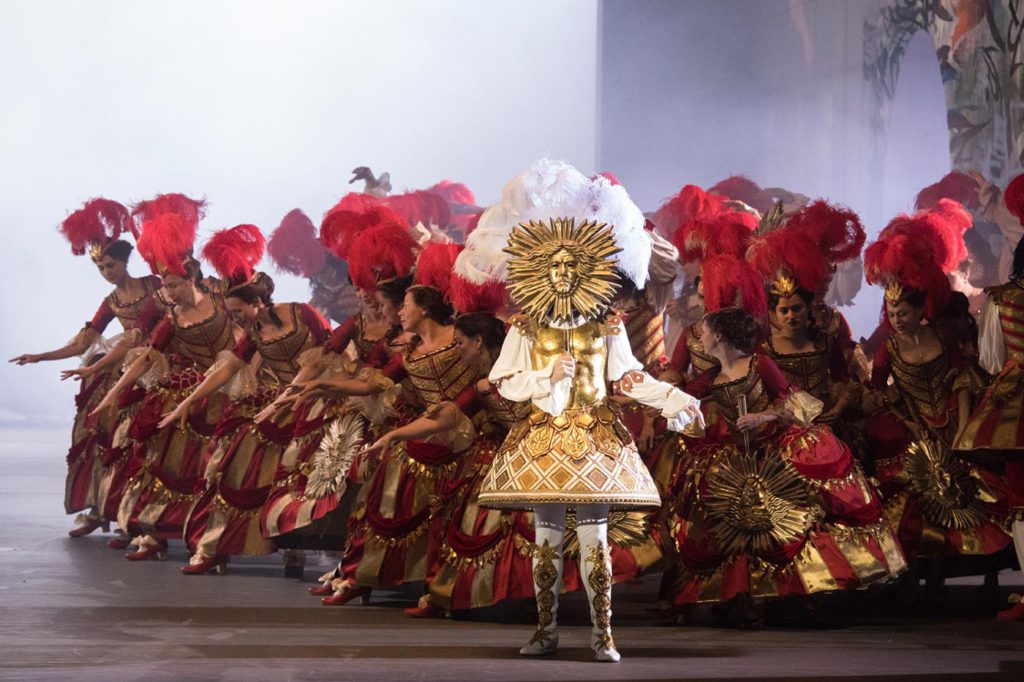 One telling detail was hidden in the set for the Vaganova studio. At its back wall hung a portrait of Tsar Nicholas II next to one of Vaganova. The tsar’s portrait was later replaced by one of Lenin – a small one, crooked at first – and then Lenin’s was exchanged for Stalin’s and decorated with flowers. And yet you could see the bright part of the wall where the tsar’s picture had previously hung. Vaganova’s portrait was unmoved. The studio was suffused with light and its back window curved into the shape of a rainbow.

“You hated the system, but you loved your Russia,” Jude wrote in his letter to Nureyev. The denunciating report on Nureyev’s defection, Vernik read out, was testimony of this system. Unlike Makarova, Osipenko didn’t defect to the west. She wrote: “We lost the best dancers. We lost Natashka. You. Mishka Baryshnikov…What is it, for God’s sake? It could have been our triumph, the glory of Russia. But it was not… A country that does not value its heroes is such a shame.” “Nureyev” does its 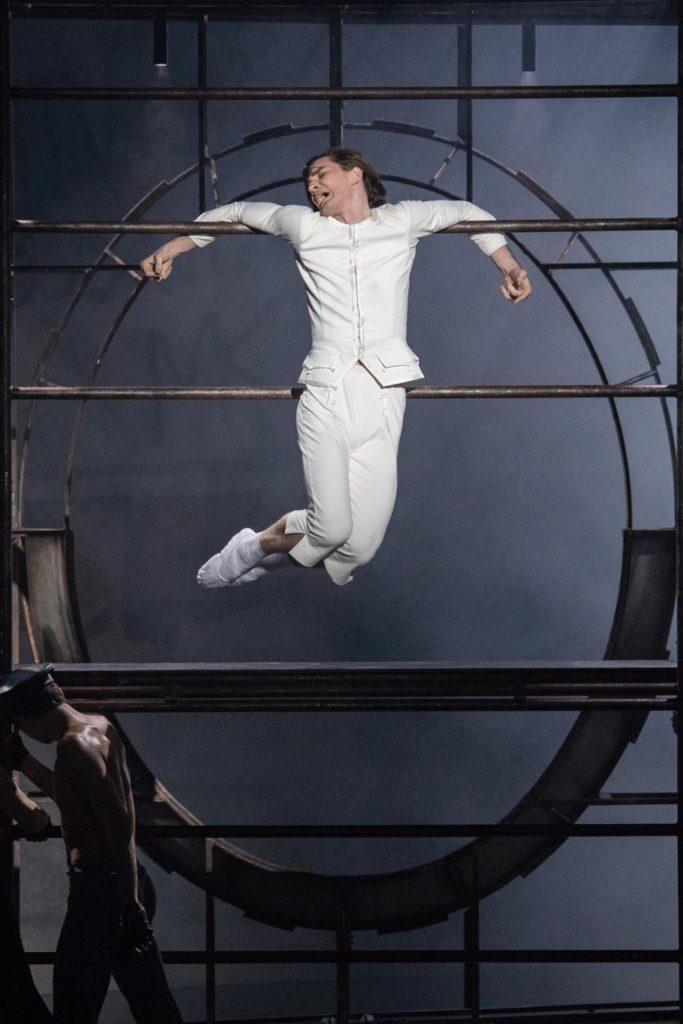 hero proud, and the artistic team, wearing T-shirts printed with “Free the Director” at the curtain call, stood up for Serebrennikov, who was not onstage. I strongly believe that he was permitted to put the final polish on the piece during the last days before the premiere and that he was backstage on that very evening, witnessing the extended applause.

On the following day, Artem Ovcharenko danced Nureyev, Vladislav Kozlov played Bruhn, and Kristina Kretova portrayed Fonteyn. Ekaterina Shipulina and Denis Savin danced the solos to the letters. Dates of further performances of “Nureyev” have yet to be announced.

Demutsky’s music is a rich tapestry of moods and surprises. He cleverly wove together beats from the staples of ballet scores that Nureyev famously danced in. One noticed “Swan Lake”, but ten seconds later – wasn’t that “Sleeping Beauty”? And then “Swan Lake” again? A full band – piano, saxophone, contrabass, and percussion – accompanied the dance of the men in drag onstage. Olga Sokolova tried out a harpsichord – one item to be sold – during the auction, and Alexander Boldachyov accompanied the solos onstage on the harp. The Bolshoi Choir and three solo singers – mezzo-soprano Svetlana Shilova, tenor Marat Gali, and countertenor Vadim Volkov – appeared several times. From the pit, Anton Grishanin and the Bolshoi Orchestra contributed romantic swells of sound, rattling brass, waltzes, and, when Nureyev leaped to freedom in Paris, such crashing sounds that one could only think of a dangerously close thunderstorm rippling through the sky.

“Nureyev” would be a perfect calling card for the Bolshoi’s guest appearances abroad, but given the vast number of artists involved (even the huge Historic Stage was crowded at the curtain call), touring the piece might strain the budget. 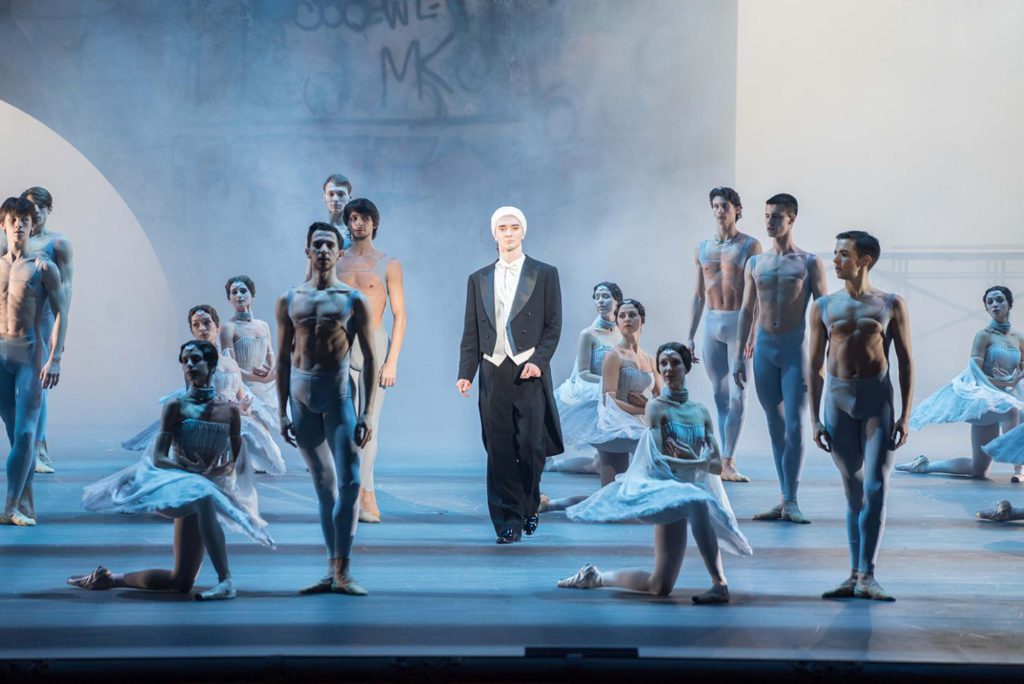