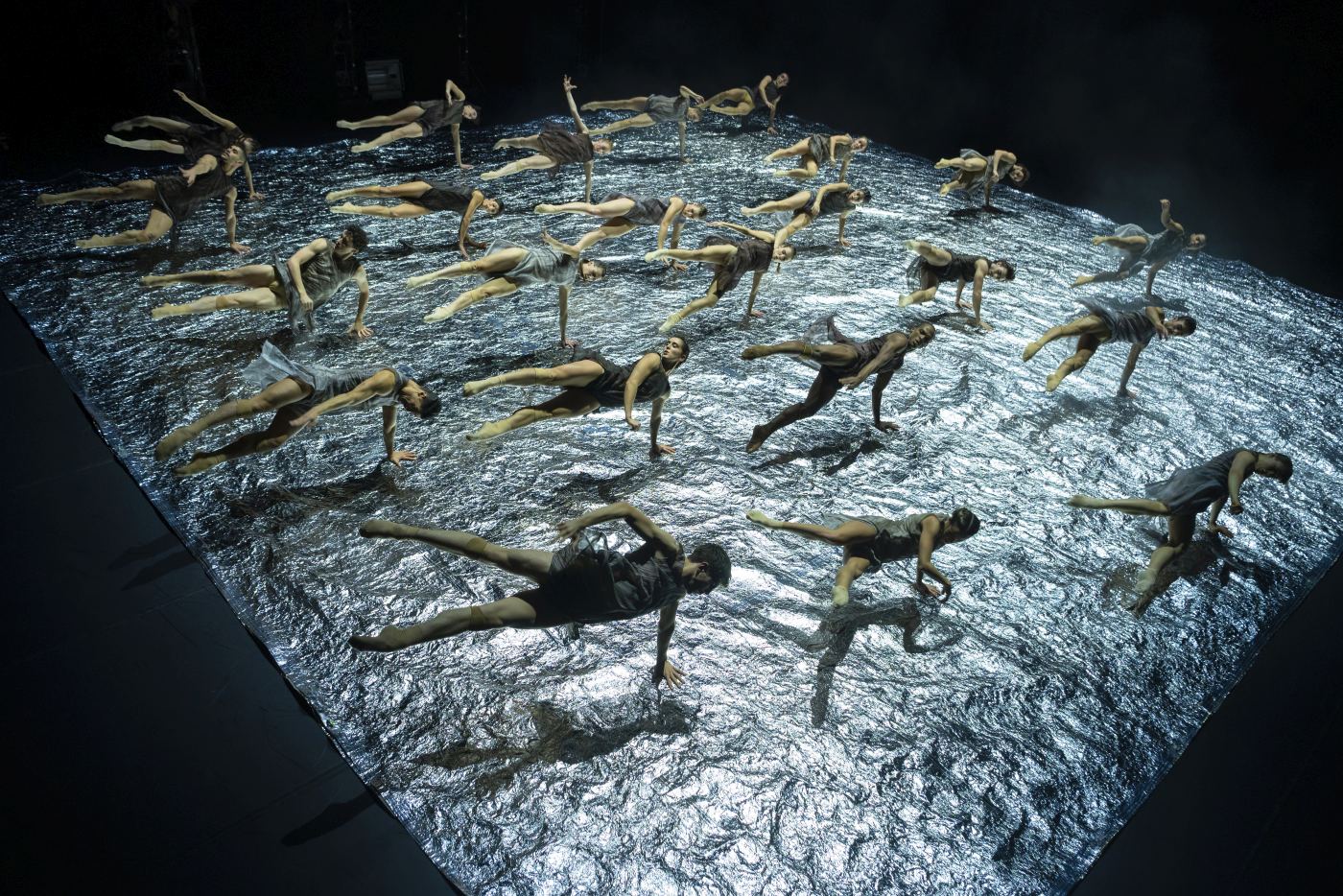 “Narrenschiff” (Ship of Fools), the first premiere of the season for the State Theater Nuremberg, is a double bill choreographed by the company’s artistic director Goyo Montero. It is comprised of two ensemble pieces: “Maria”, a ballad about the bible’s Maria Magdalena co-produced with the Diana Vishneva Foundation, St. Petersburg (Vishneva danced the leading role at the premiere in December; the photos below show her), and “Narrenschiff”, which gave the program its title. I saw the – for now – final performance.

Though the tremulous viola and violin of Lera Auerbach’s “Dialogue with Stabat Mater” played by Ulrich Schneider and Sebastian Casleanu forewarn drama, “Maria” opens innocuously: a benign mass of bodies in gray unisex-dresses rolls and 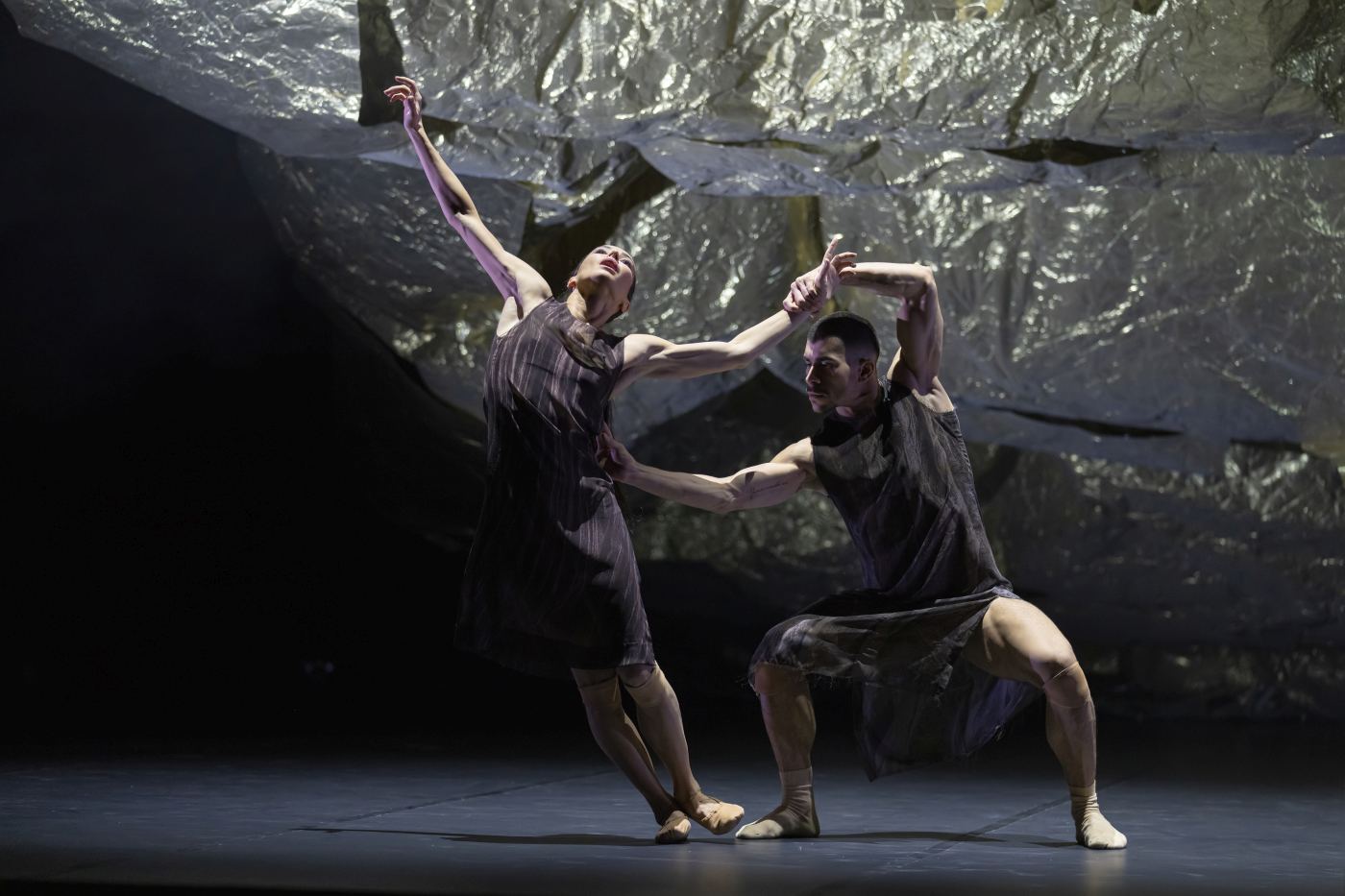 crawls across a huge silvery foil that crackles faintly with each movement. Step by step, they gain self-confidence, straighten themselves, become human, and raise one man (…Jesus?) out from within. A warm light brightens his face. Golden light streams in and offers strength to the others – except for one woman, Maria (Renata Peraso), who lies weakly on the ground. Is it empathy that compels the group to crawl beneath the foil to prop her up, or does the supportive foil represent some heavenly intervention? It’s supposedly the latter – Montero calls this segment “Thaumaturgic Feats”, but to grasp the storyline of “Maria”, I’d advise consulting the program. 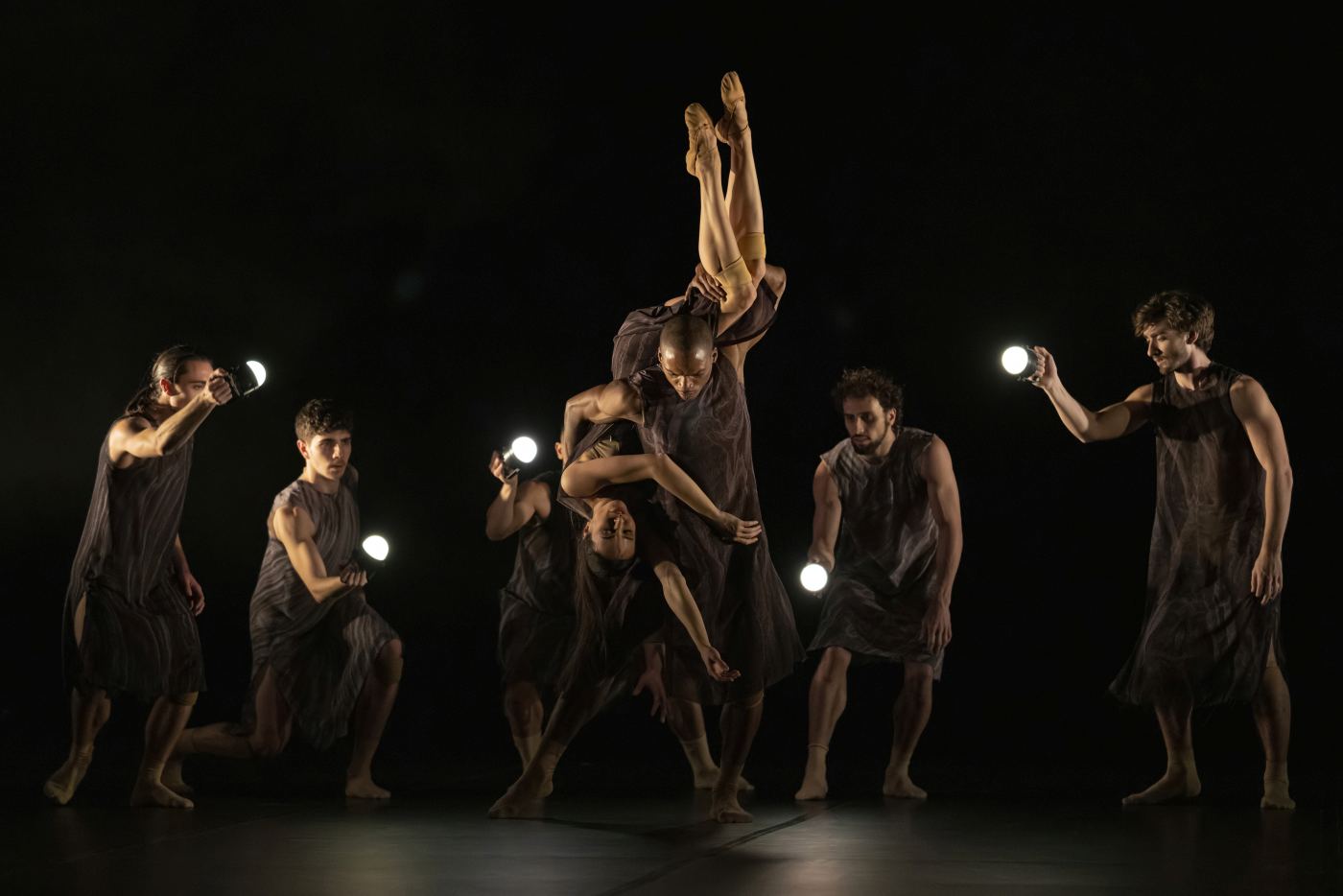 Immediately, Maria is treated like a pariah. Men who attempt to approach her are either held back or take a beating. The Jesus-like figure stands helplessly surrounded by a yelling mob comprised of people who believe their individual needs to be most important. It is a strong scene, although the decision to have the group burst into rude, earsplitting clamor for a second time makes it feel overdone. The same applies to the various-sized silver and gold foils that Montero continually repurposes. The XXL-version is transformed from hills to billowing landscapes, from golden walls to a protective canopy; the bath-towel-sized rescue foils serve as warming blankets, as hiding places, as rolled parcels later burdened onto others, or – crumpled – as heaps to rest on. 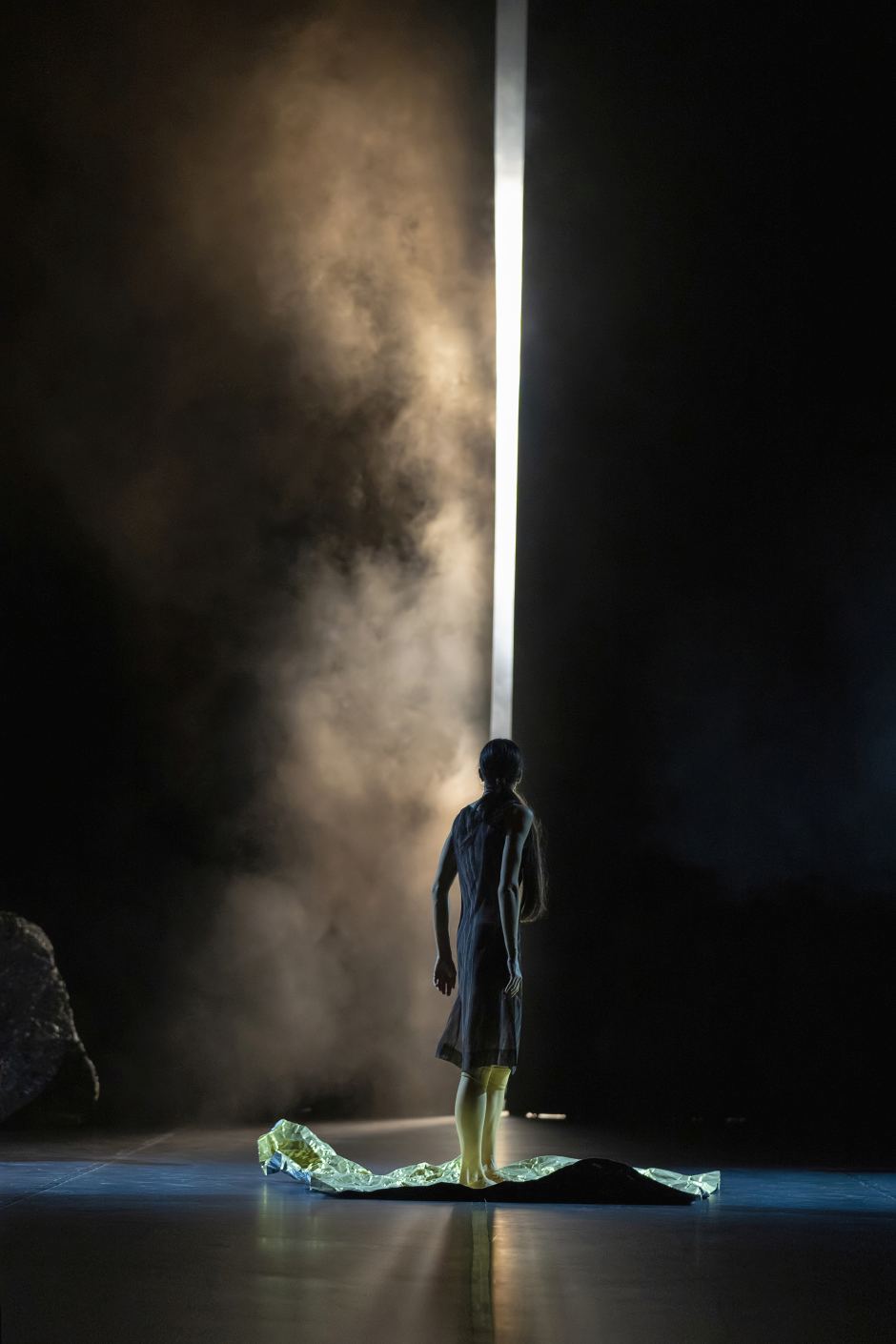 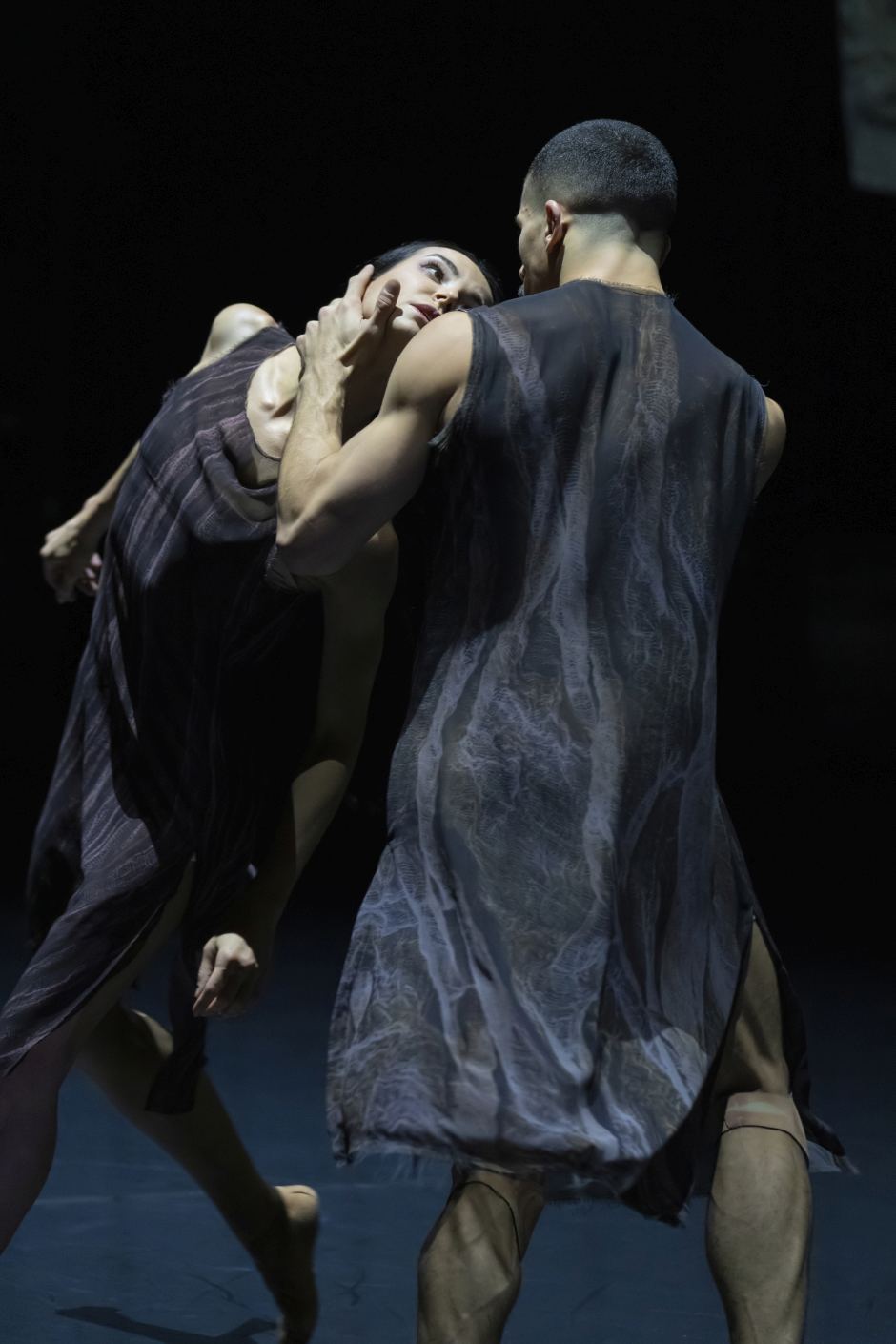 Plumes of fog and clever lighting (flashlights!) attract and divert the eye, but cannot hide that Montero’s choreography isn’t consistently strong. Some scenes are haunting; others, such as Maria’s agonized wriggling are built on cliché.
The music has long shifted into calmer melodic waters by the time Maria is peacefully re-united with and even revered by the group. Still, the foil remains the key element. Clinging to it or discarding it seem to be the crucial decision of the moment. When one piece of foil is finally left for Maria, she carefully straightens its crumples. Suddenly the black backdrop opens for her, revealing a narrow passageway of fiery light. Her new path? 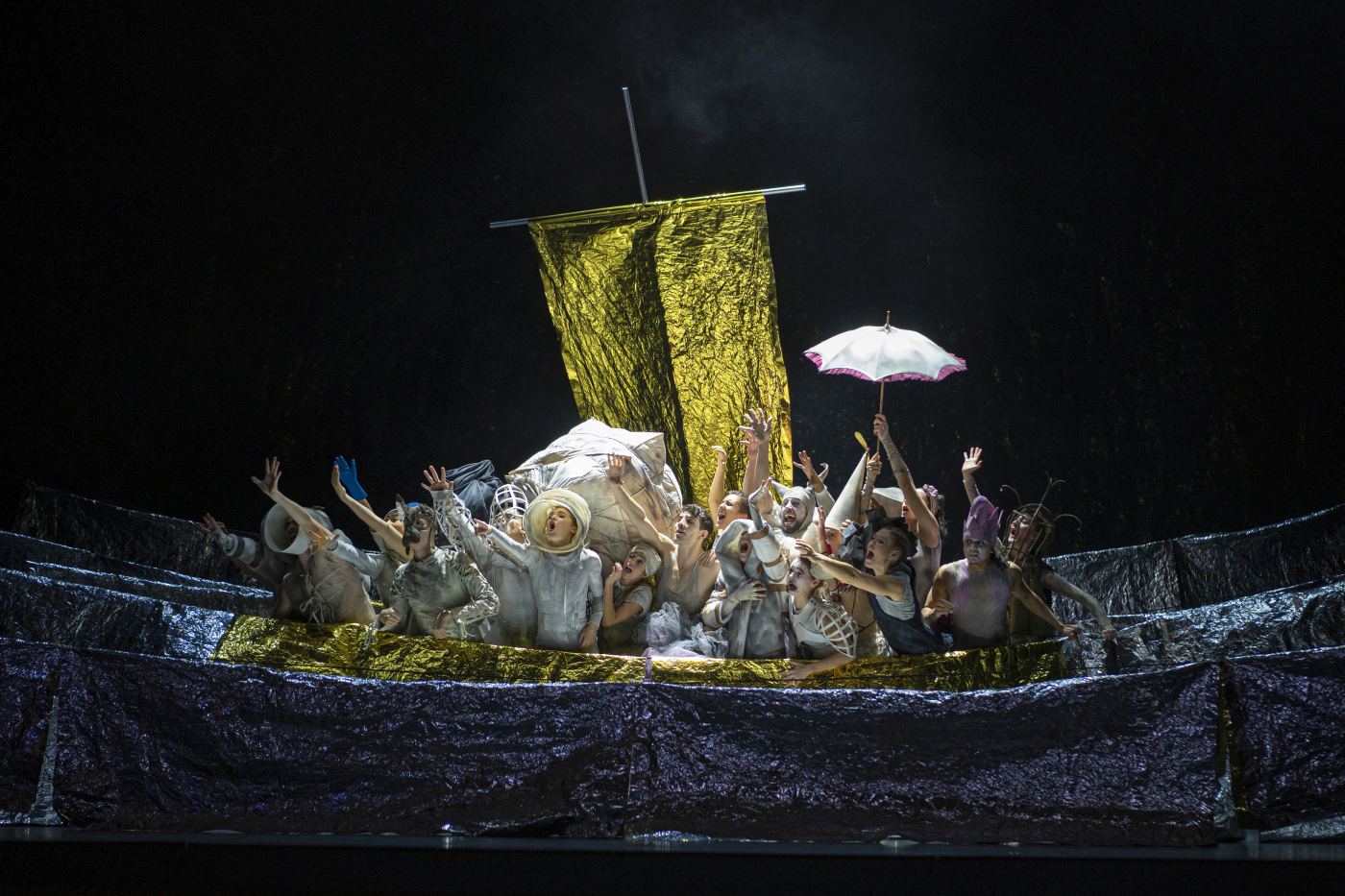 Lack of empathy, acceptance, and solidarity, fear, and exile – these are the topical bonds between “Maria” and “Narrenschiff”. The visual bond is the silver/gold foil, which this time serves as the bow of a ship, the rough sea, or an enormous red-from-gold blanket under which the writhing “fools” crawl. These “fools” are refugees, crammed by Montero onto a boat, searching for acceptance in a new home. (I’m not sure whether real-life boat people would appreciate a comparison with fools.) A quirky masquerade shows us the crosses each person has had to bear in life. Again, our ears are treated to deafening shouting, this time at the sight of dry land. It stops abruptly when the crew suffers shipwreck. Their costumes are lost and are replaced by – can you guess? – warming rescue foil. As in “Maria”, one dancer wriggles in agony on the floor, but the group makes their way onward, 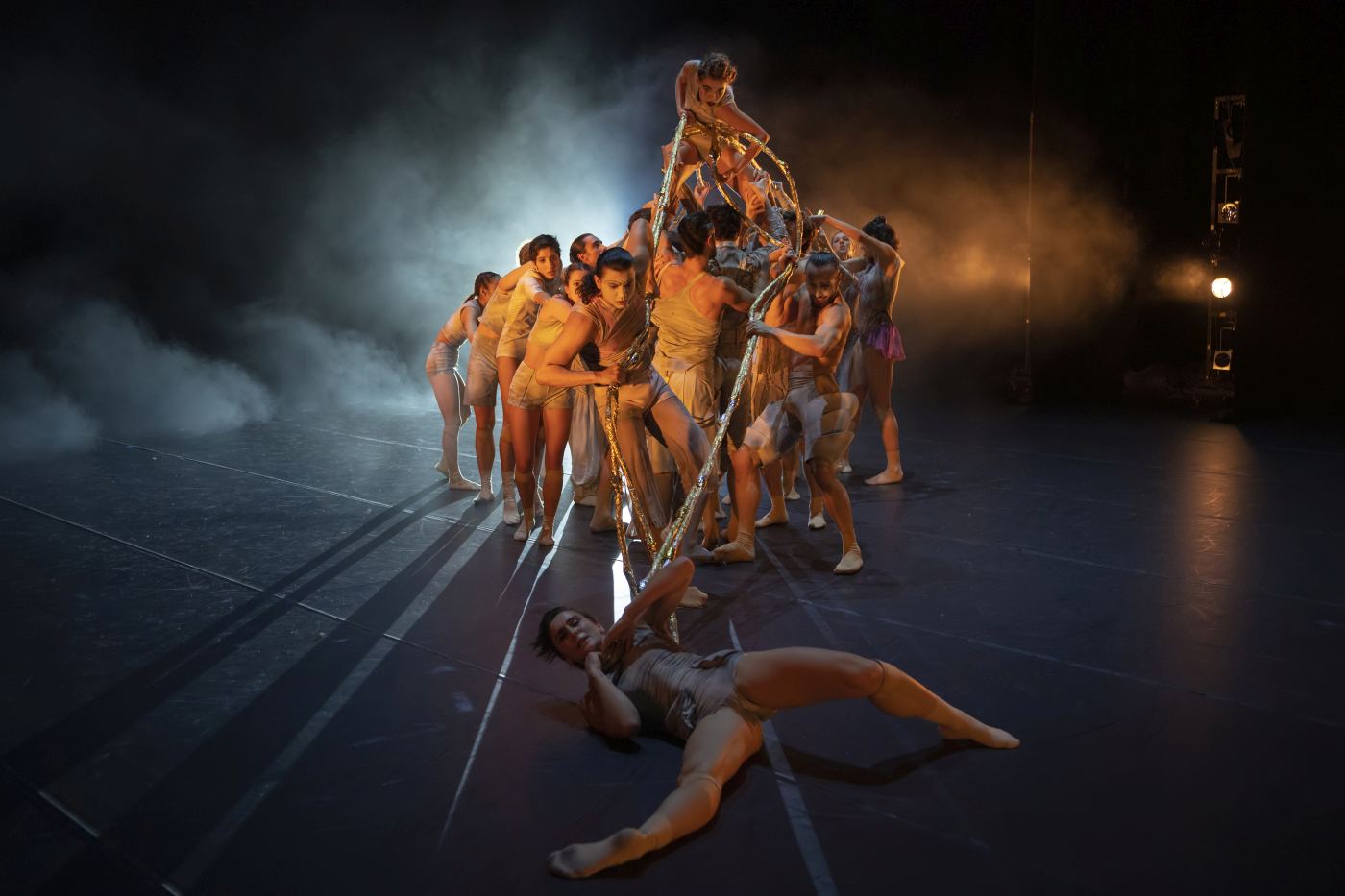 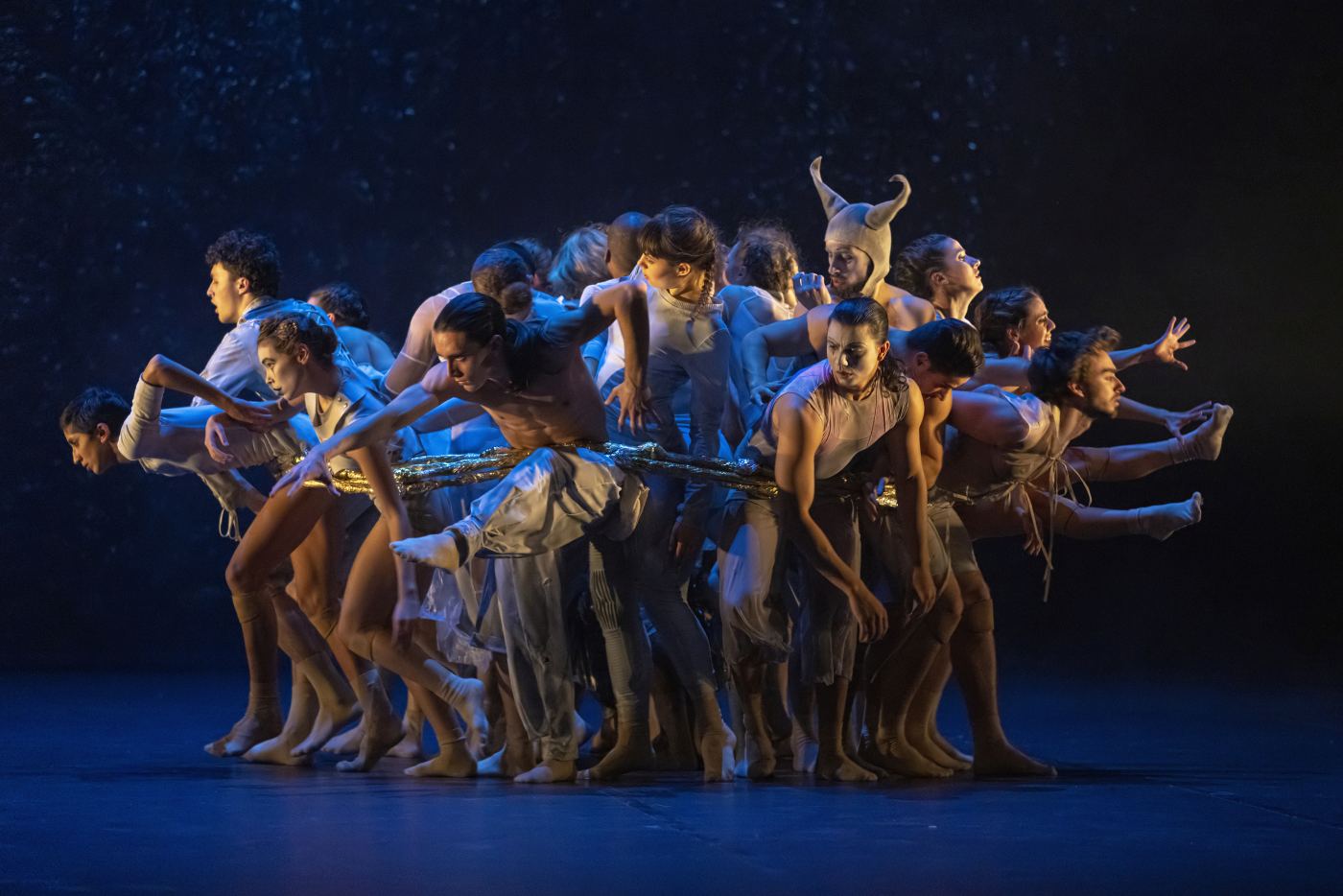 stomping and fighting with steely determination. A sputtering, thumping, sometimes aggressively noisy soundscape accompanies them; composer Owen Belton took inspiration from Richard Strauss’s oeuvre. We heard it partly recorded and partly played live by the State Philharmonic Nuremberg.
Tied together by a huge golden rope, the castaways push forward; yet the rope isn’t controlled by an outside force, but instead from the group itself. Any attempts at escape are forcefully prohibited; independence remains a faraway dream. The rope subsequently becomes a boxing ring and an arena for brief pas de deux, until it is stretched out in a line for the dancers to grasp and move along hand over hand. 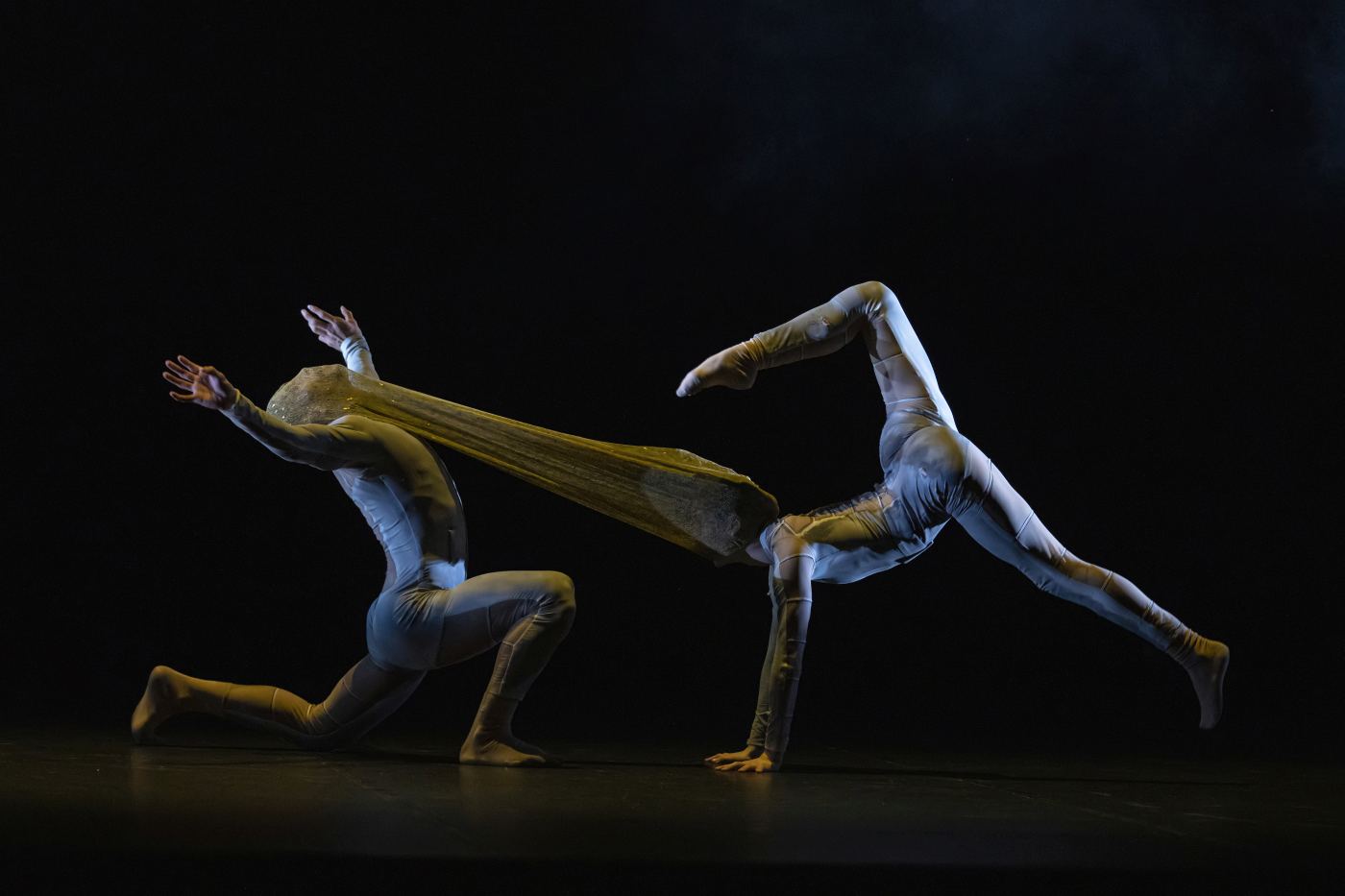 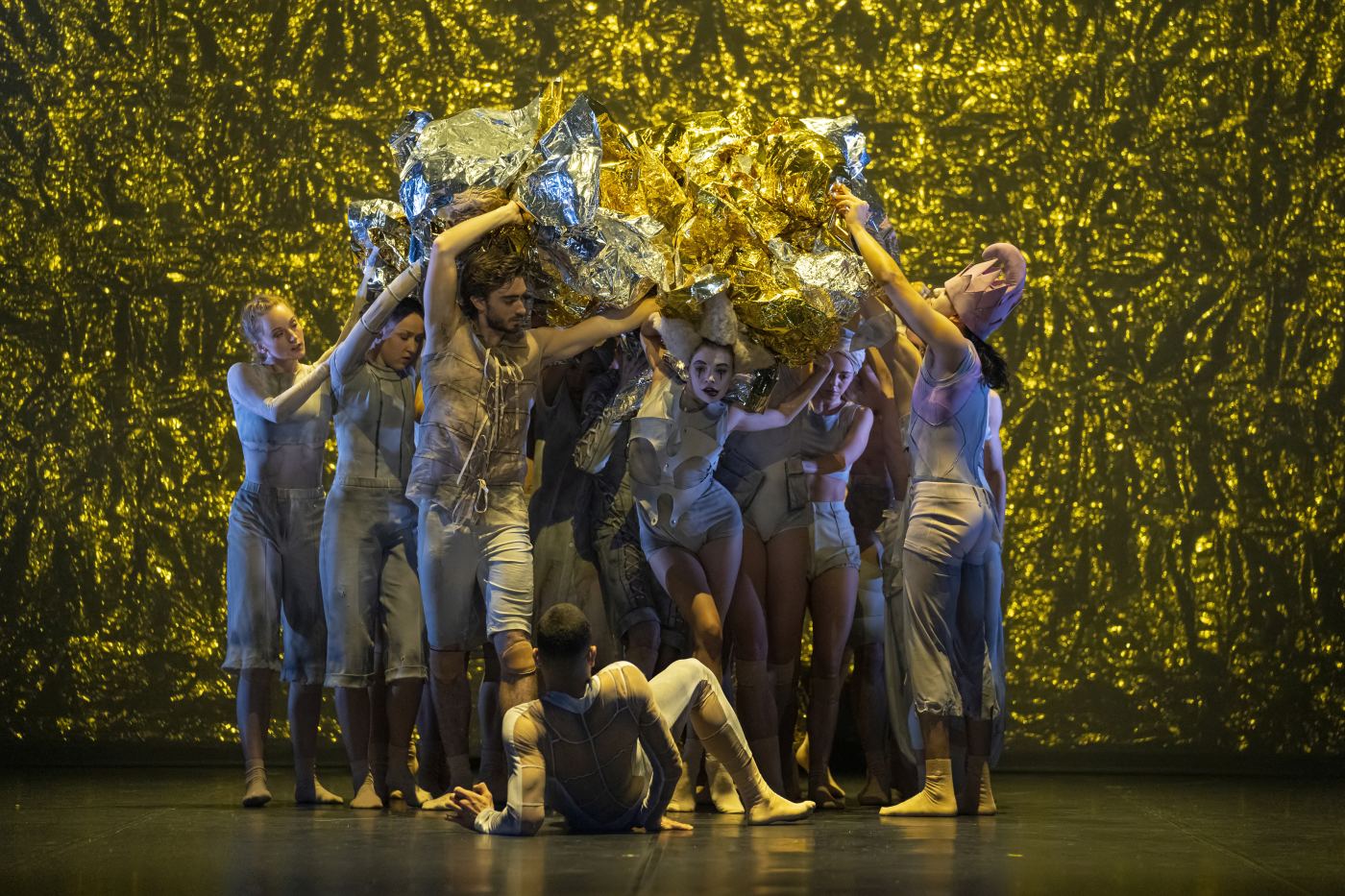 The safe haven that they finally reach must be across the pond, as the figure that greets the arrivals – the soprano Emily Newton – is dressed as the Statue of Liberty, her skirt and diadem made from rubbish. Though she sings (unnecessarily amplified) songs by Strauss about sunset and bedtime, the refugees’ final collapse feels more like a descent into death than into sleep.

The costumes for “Maria” and “Narrenschiff” were created by Salvador Mateu Andujar. Leticia Gañan and Curt Allen Wilmer designed the set; Tobias Krauß and Goyo Montero delivered the lighting. 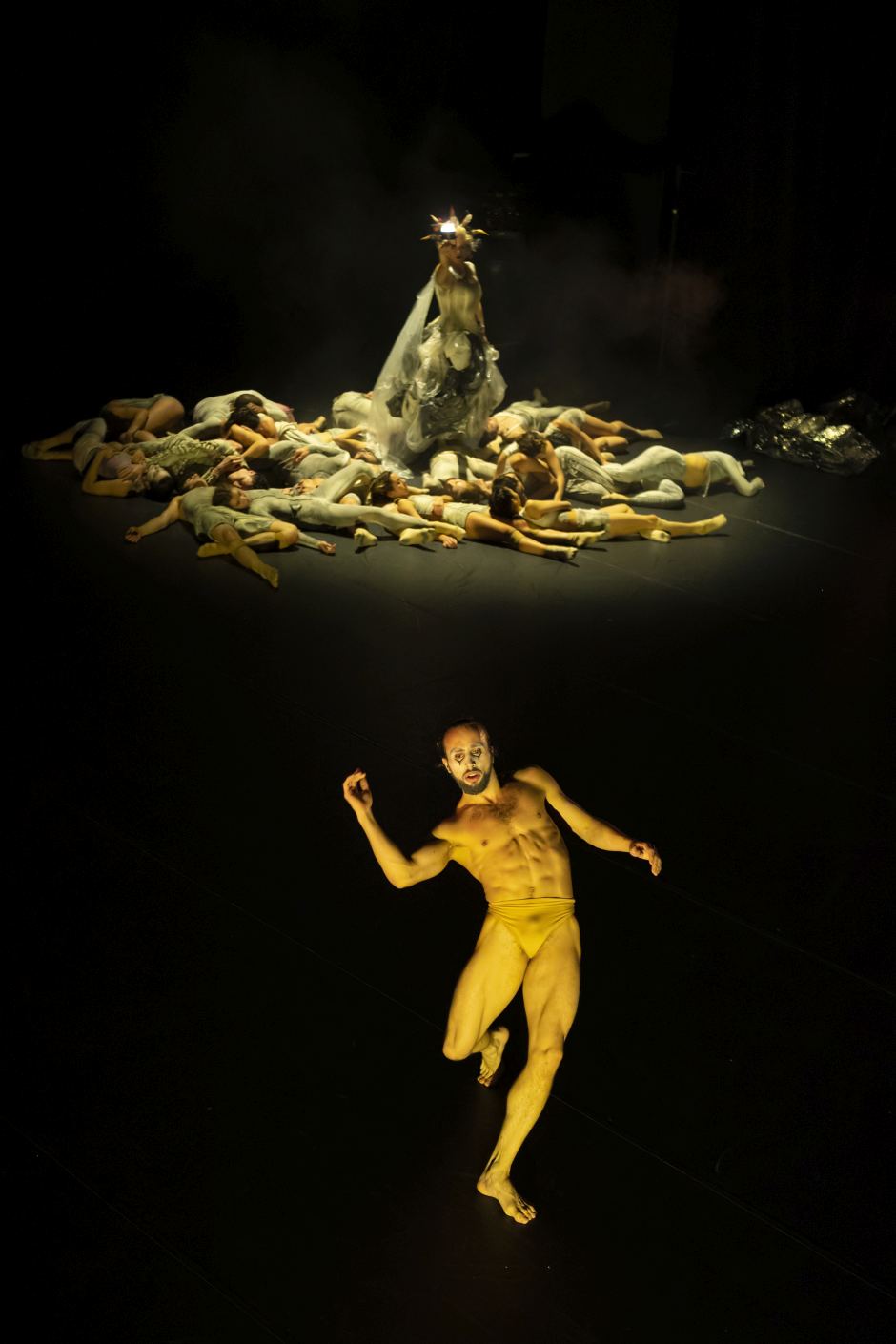