“Made For Us III” (“The Last Coincidence” / “Nighttime Showtime”)
Ballet of the State Theater Nuremberg
Play House
Nuremberg, Germany
July 01, 2022 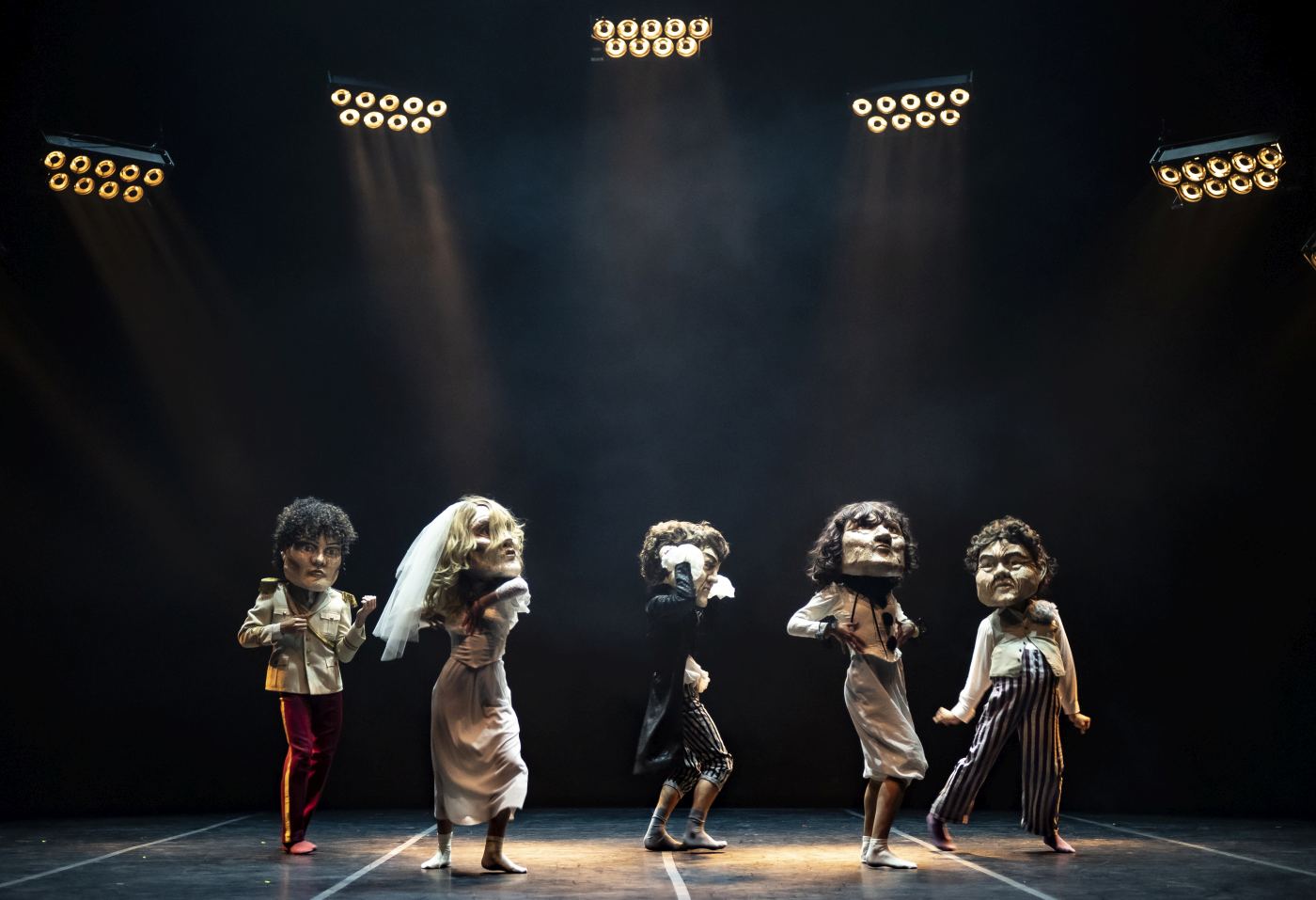 The ballet of the State Theater Nuremberg recently premiered “Made For Us III” and, in so doing, resumed their project of commissioning ballets from external choreographers (a project originated in 2014). This year, pieces by Bryan Arias and Joseph Hernandez shared the stage.

In Arias’s “The Last Coincidence”, two women and three men engage in a lively multi-language debate (or monologue?) on a bare, box-like stage. Huge papier-mâché masks enlarge their heads and make them into distinct characters: a braided, epauleted soldier (Mikhael Kinley), a magician wearing striped knickerbockers (Carlos Blanco), a female Pierrot (Stella Tozzi), and a bride (Kate Gee) in love with a disheveled and portly gentleman (Edward Nunes). When the spotlights are suddenly switched on and the group lines up for a revue dance routine, it becomes clear that we are watching a backstage rehearsal. After much whispering and a brief raising of masks, they move on to the next number, swaying their hips to 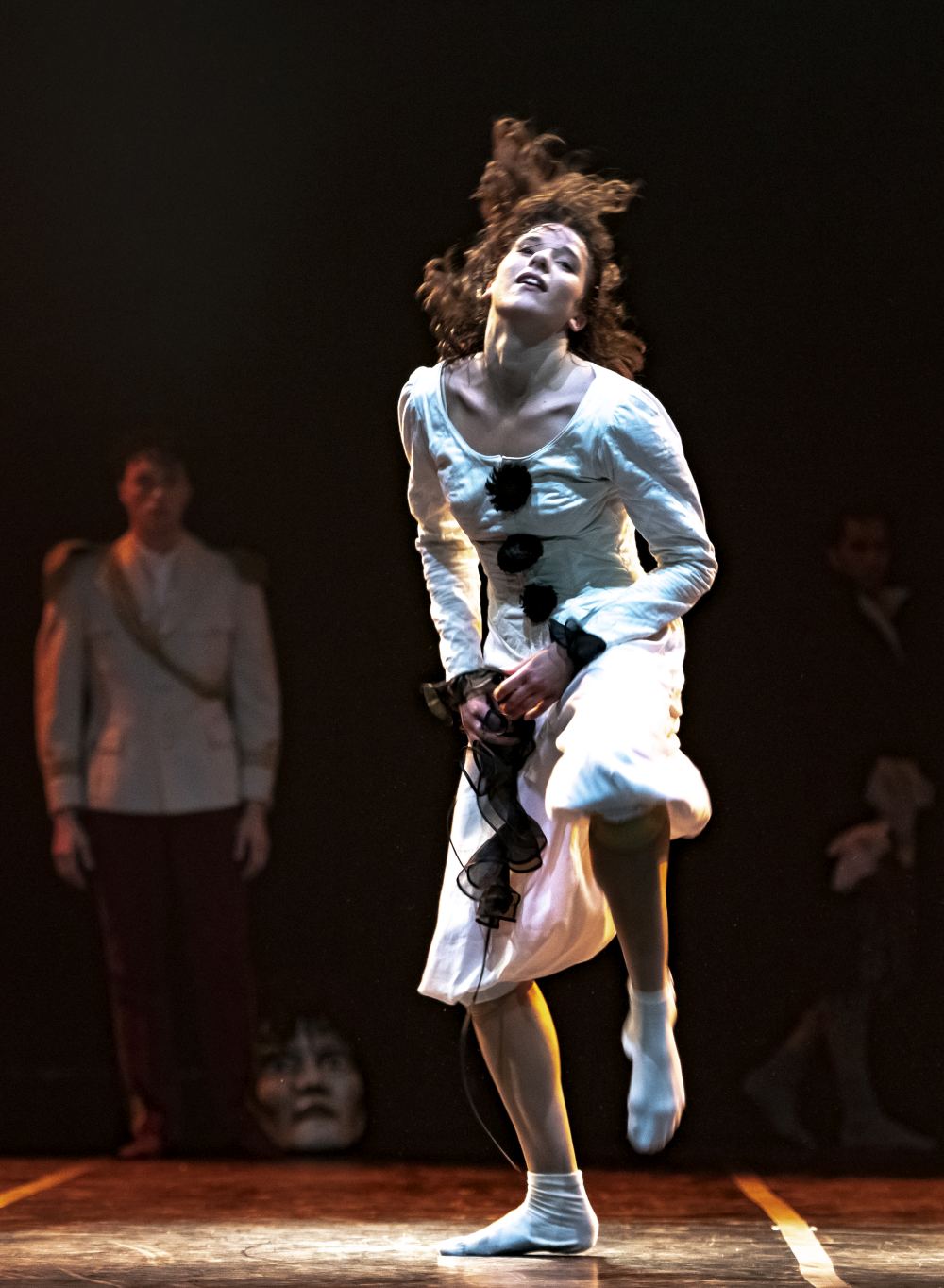 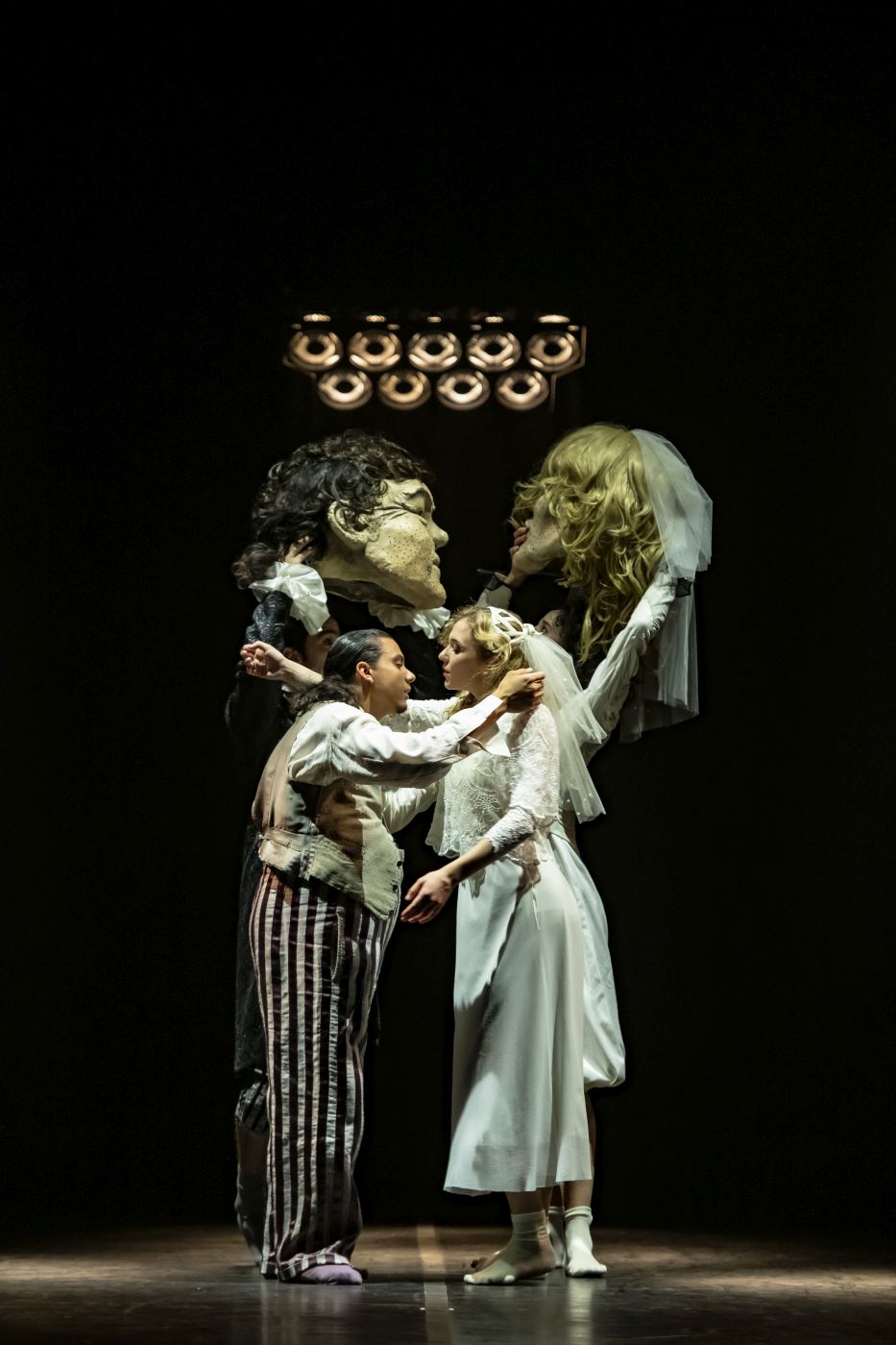 Barbara Lewis’s schmaltzy 60s hit “Hello Stranger”. In the silence that follows, three walk out one by one, leaving the amorous couple behind. Embracing closely, they dance and kiss until the others return and slowly remove the lovers’ masks. With nothing left to hide behind, their relationship quickly deteriorates into an ungenerous face-off – leaving behind Nunes, stoop-shouldered, his lips frozen in a twisted grin. A laid-back rehearsal accompanied by (a rehearsal recording of) Duke Ellington re-ignites the fun of the evening.

The borders between rehearsal and performance have long blurred by the time the bride returns, laughing so hard at the others that it brings her to her knees. She is quickly pulled out of the spotlight to make way for a parade of random-seeming acrobatics. Accompanied by meditative electronic music, the group members crawl across the stage on their bellies or on all fours, roll over each other’s backs, or jump furiously, their arms thrashing at the air. 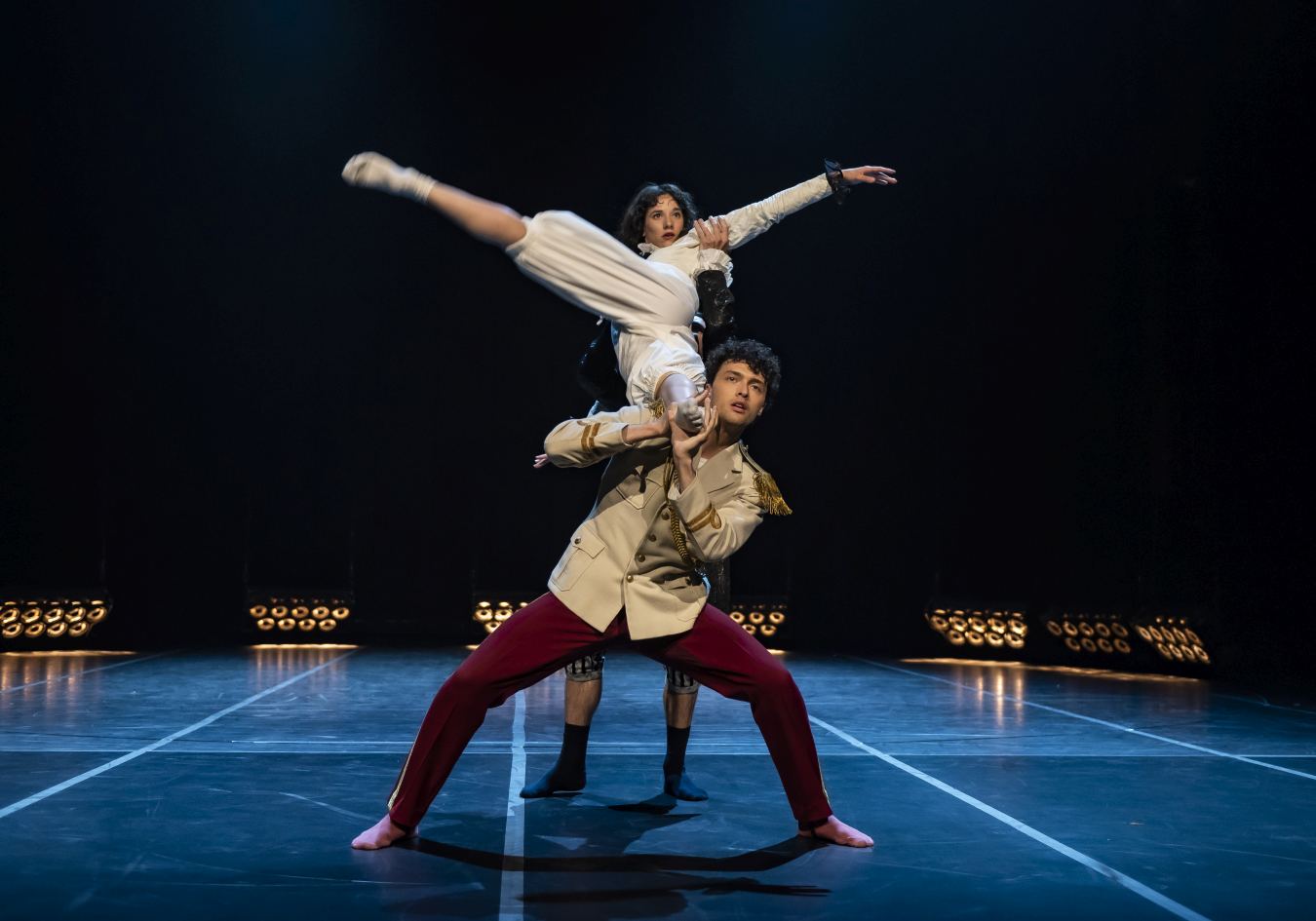 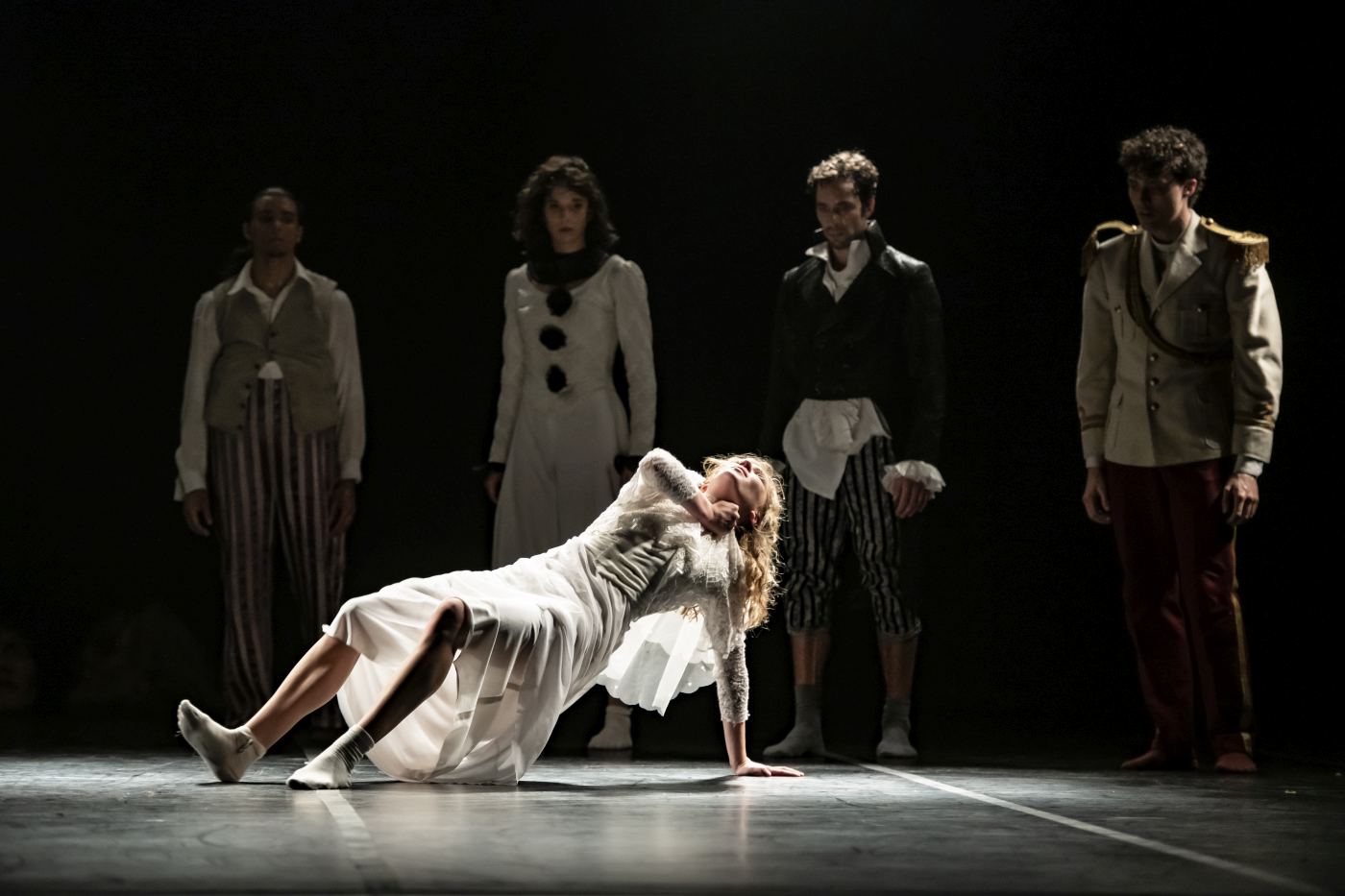 Often one dancer goes down, exhausted, and is pulled out. In one instance, as four lay motionless on the ground and the magician walked solemnly from one to the other, it seemed the piece had taken a tragic turn – but sudden claps brought everyone back to their feet. This, too, was a rehearsal.
Aria gave each and every dancer the chance to shine in a final succession of solos – the best I’ve seen from the company this season. Blanco’s magician oozed sex-appeal. Nunes twisted his padded body as if it were made of rubber, and Gee’s bride – throwing reassuring glances to her colleagues – died in silence. The spotlight was barely out when the dancers burst into excited backstage claptrap. 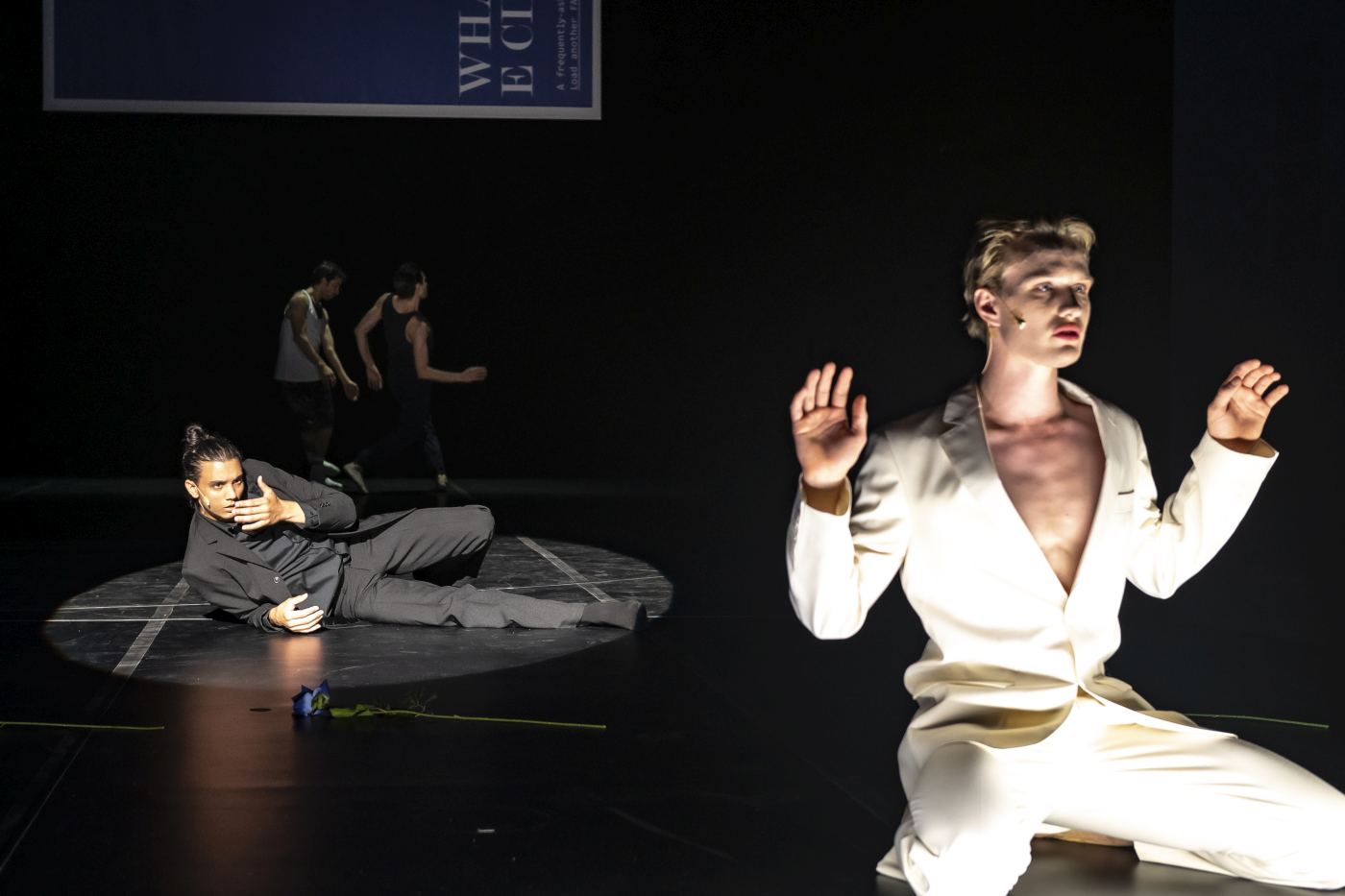 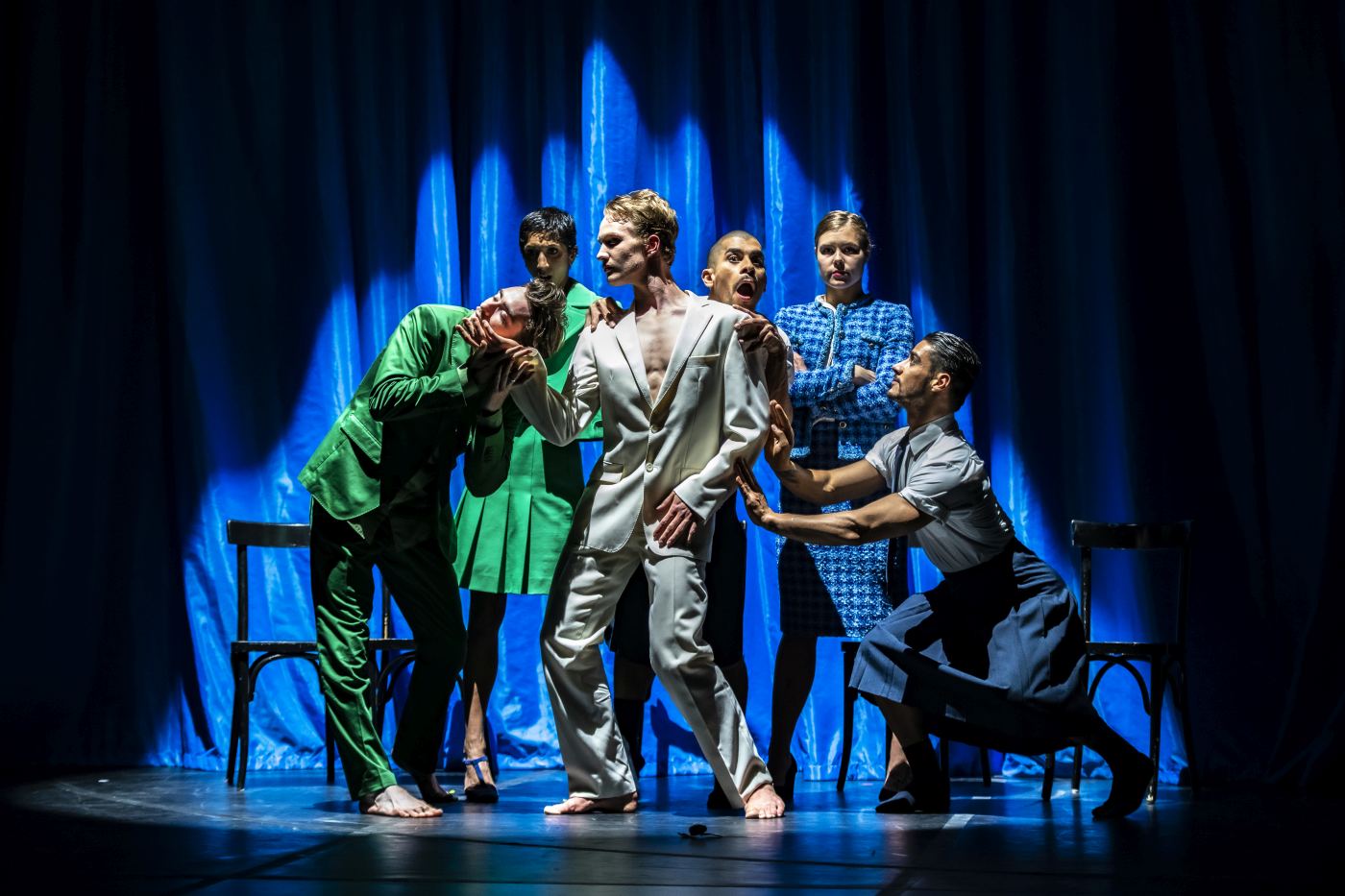 Deliberately or by accident, Hernandez’s “Nighttime Showtime” is based on the same “play-within-the-play” concept – except that he employed more dancers in this cross-genre showbiz production. The piece asks the question: “What is the value of art in dire circumstances?” – printed on a huge banner that hangs onstage. Two moderators (Victor Ketelslegers and Andy Fernández) sleekly guide us through the show’s chapters (surtitled above the stage), which include: An attempt to find it out; 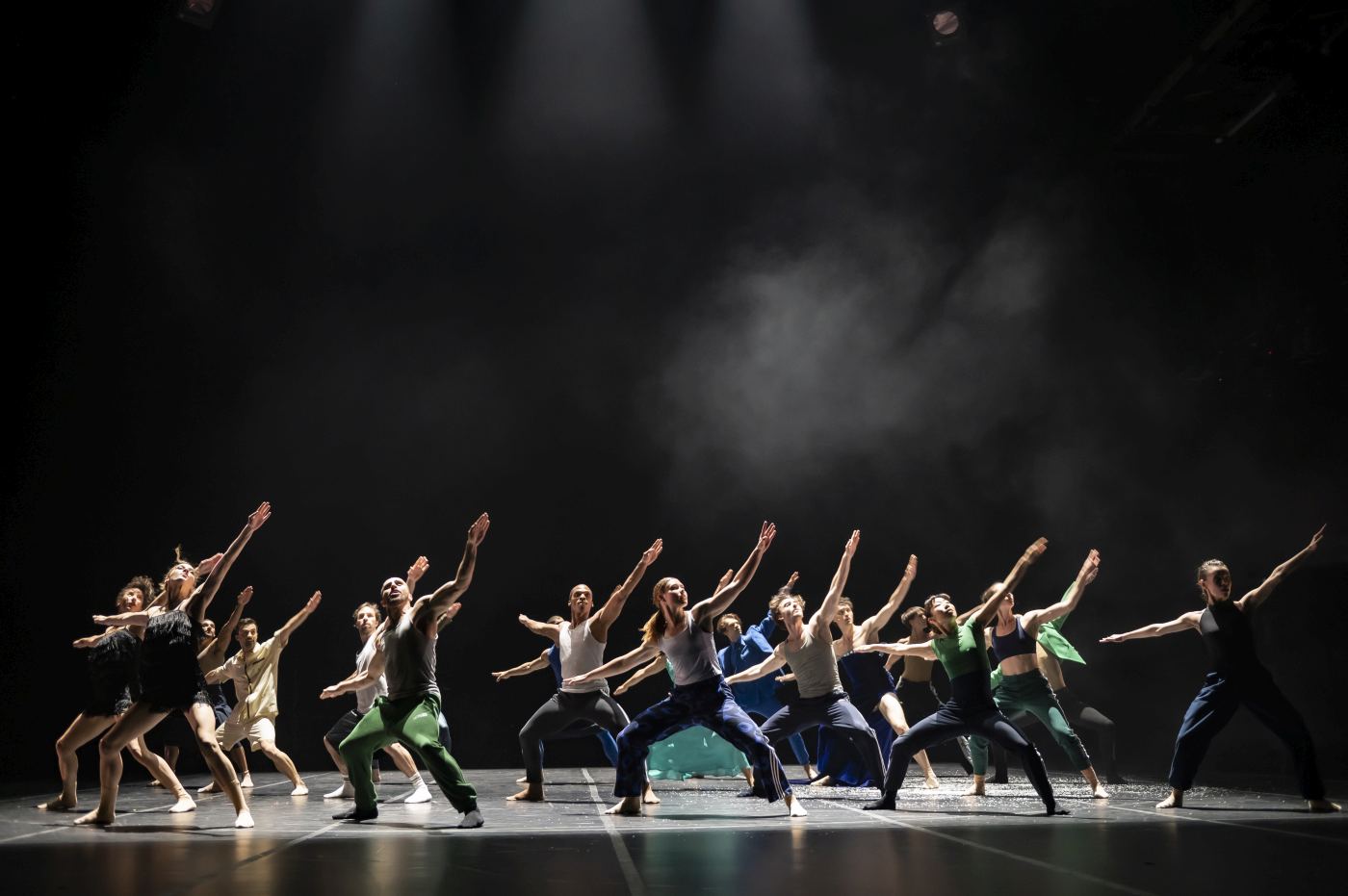 Irony and madness; Dance with references, done with love; and Total commitment to pleasure. We hear lectures (about meta-theater, fear, and the opening of the soul), discussions (about arranging chairs, eliciting a Mexican wave from the audience, or coaxing audience members onto the stage for a dance), and musings (about male and female characters, the color blue, and whether or not to be good / enough). These sections are interwoven with scenes that are meant to be bizarre, funny, or ironic, and accompanied by a vaporwave-inspired soundtrack by Johannes Till.

We watch Kade Cummings rap while decked out in a strapless blue evening dress; later, he fans himself effeminately with blue books; Stella Tozzi, wearing a 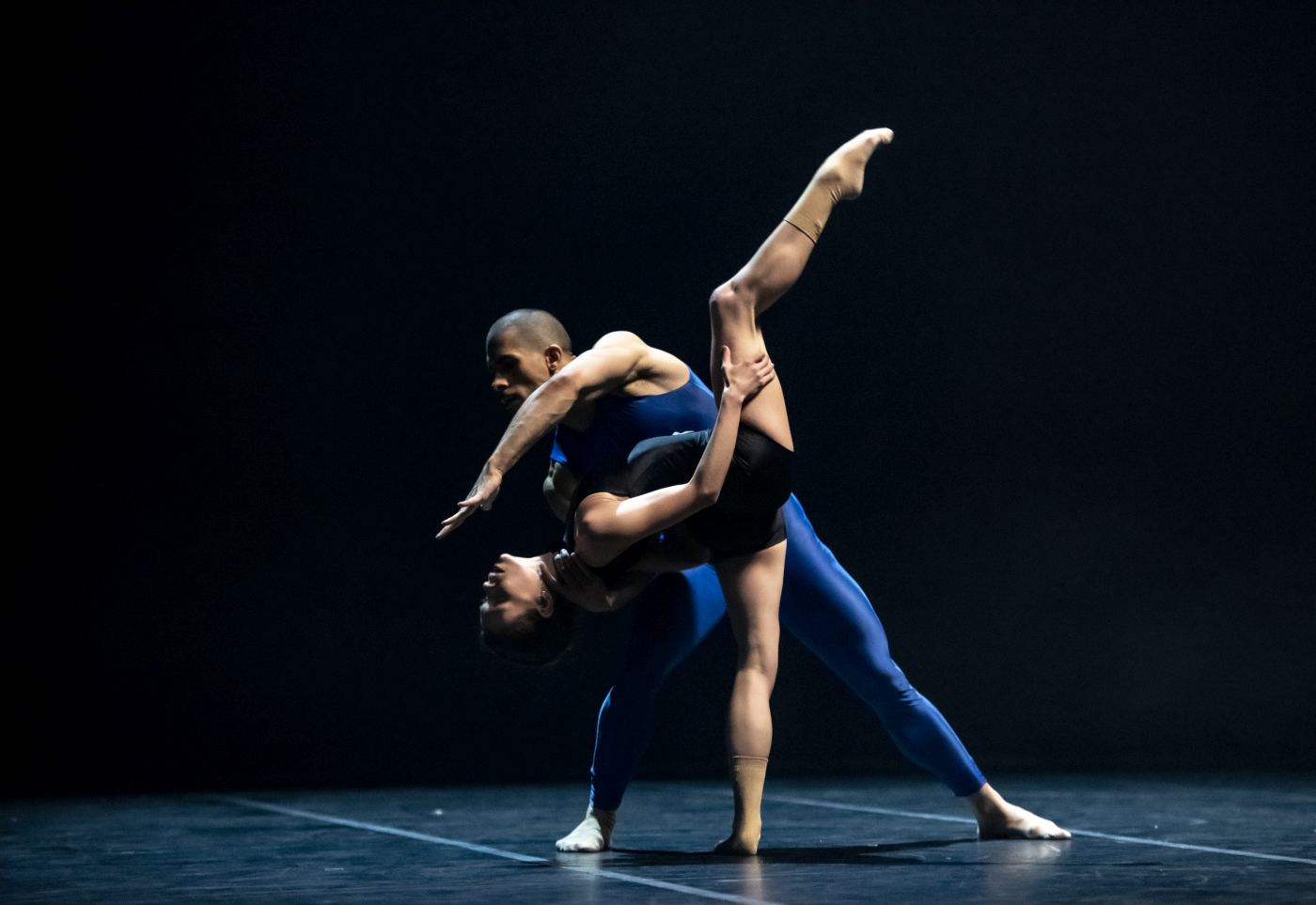 skin-colored full-body leotard and black high heels, twists her body like a mantis, her fingers greedy claws. A lady in a blue skirt suit (Karen Mesquita) distributes blue flowers across the stage; Edward Nunes urges a cameraman to film his smug solo; a group waves a welcome banner, and a rehearsal involving glittery plastic props is stopped because “we’ve done this before. We should try something else.”

Exactly – but they don’t come up with something substantial. Hackneyed dance sequences (the sort featuring kick, push, and pelvic thrust) sandwiched between cabaret / talk-show / musical piecemeal cannot hide the fact that this show is nothing but hot air. Perhaps it’s because “we haven’t got into the piece you came to see tonight,” as Ketelslegers reveals. So – we watched a shallow forty-five-minute warm-up, culminating in a curtain call featuring the Mexican wave? If that’s the value of art in dire circumstances, then art might be dispensable. 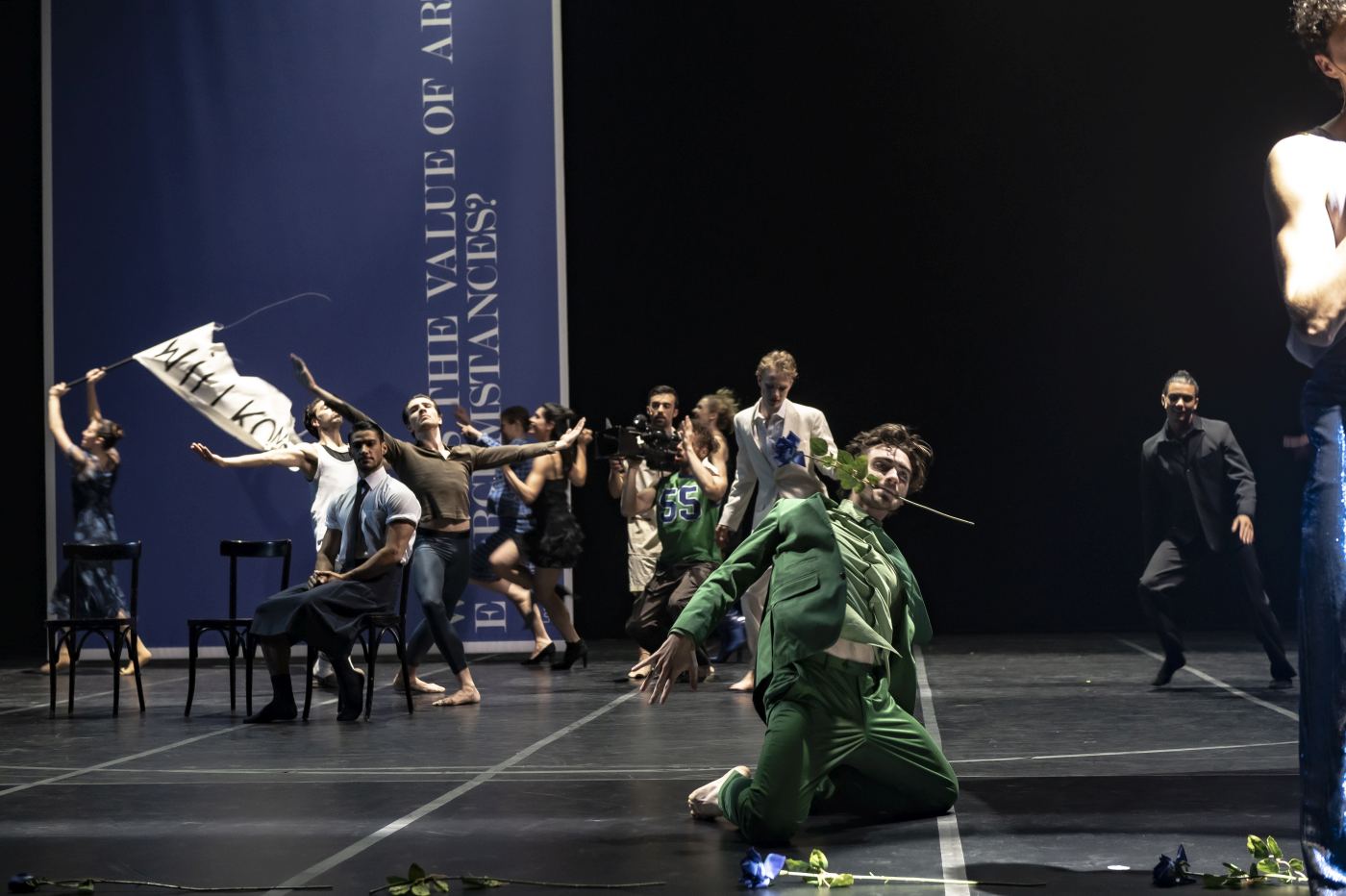