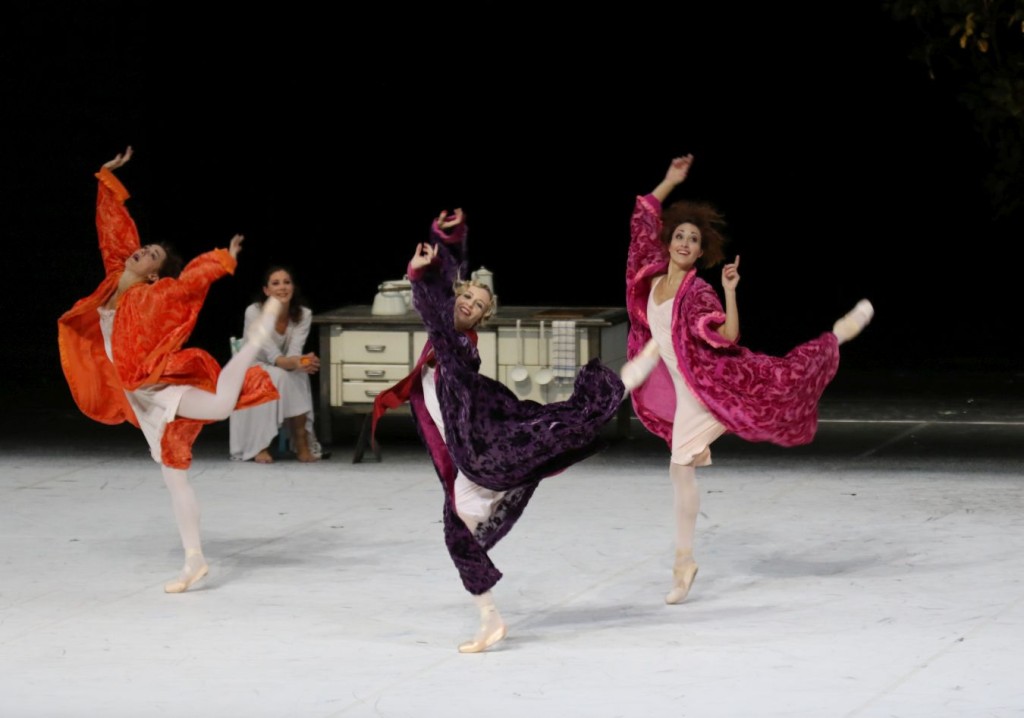 Neumeier avoided the bloody cruelties one finds in the written sources. The mean stepsisters neither chop off their toes or heels to fit into Cinderella’s shoes, nor are their eyes picked out as a punishment at the end. Instead Neumeier added a heavy dose of humor and exaggerated most characters with stark cliches, yet also allowed character traits to surface which put another complexion on some figures.

Cinderella’s father (Lloyd Riggins) is a gray, mustachioed little widower who lacks the courage to put his new wife and her two daughters in their place. They wear the pants in the family and he lets them do as they like. Through all the years he lets his biological daughter down but thanks to him meeting and recognizing the Prince by chance, Cinderella and the Prince are reunited at the end.
Cinderella’s stepmother (Silvia Azzoni) is an affected madam, all airs and graces with an infallible instinct for who is worthy to be ensnared. At the royal ball she clings to the King and coquettishly wears his crown. Later at home she proudly parades around with the King’s sash which she obviously had wheedled out of him. However, one of Azzoni’s best scenes was earlier when she prepared herself for the ball. Overly excited she stormed on stage to her husband, having applied a quark mask and cucumber slices on the face which had slipped her mind. Suddenly noticing that she looked ridiculous she huffed off, holding her head high. 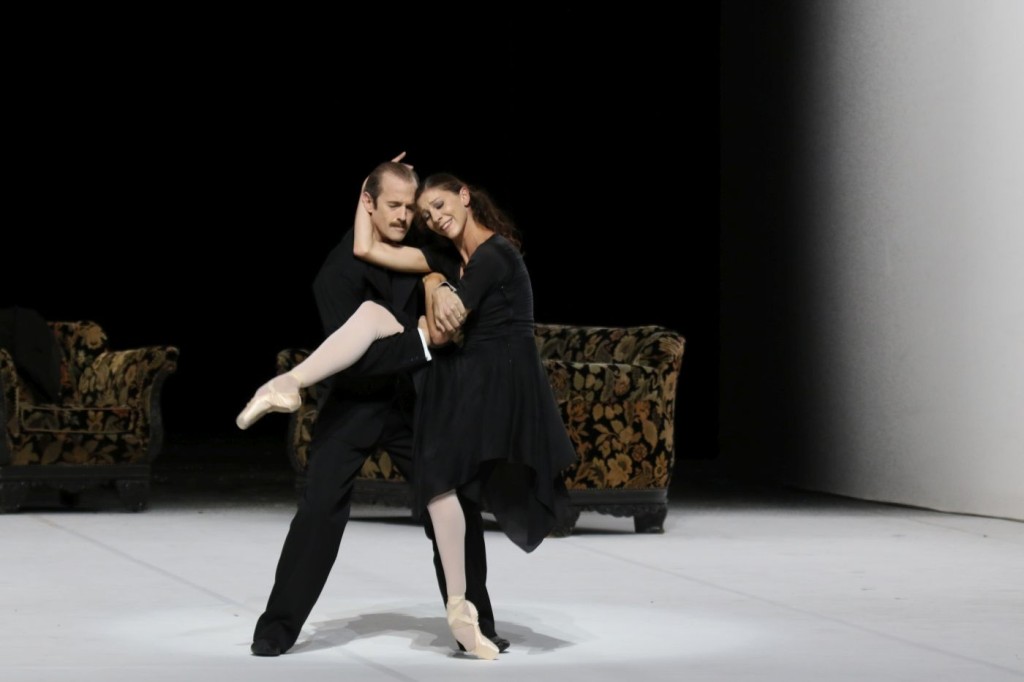 Like mother, like daughters. The two young women (Leslie Heylmann and Carolina Agüero) are eccentric, arrogant, gleefully naughty and terribly superficial. Two spoilt maidens, obsessed with pleasure. Heylmann relished her role as the daughter who always played to the gallery while Agüero seemed a tiny bit less extroverted. They, too, had an unflattering scene: Partying at the ball left them hungover with hair rumpled, struggling with nausea.

Cinderella’s birth mother (Anna Laudere), with whose funeral the story begins, is realistically characterized. She returns as a supportive, kind-hearted spirit to help her daughter properly dress for the royal ball and later still she also comforts the desperate Prince who in vain is searching for Cinderella.
Following the Brothers Grimm, Neumeier invented four bird spirits as her mother’s attendants (Alexandre Riabko, Aleix Martínez, Christopher Evans and Marcelino Libao). They make Cinderella fly out of sheer happiness when newly outfitted with a plain white dress and golden shoes.

At the Prince’s royal palace stereotypes abound. His father the King (Thomas Stuhrmann) is the epitome of goofiness. Dressed casually in pajamas, house slippers and crown he presents a selection of potential wives to his stubborn son, while biting into an apple with a lusty appetite. Rather than reigning and socializing he loves to immerse himself in reading. When it comes to women he basically is as weak as Cinderella’s father, but doesn’t realize it. Instead he thoroughly makes a fool of himself, completely falling for the stepmother’s advances. His three ministers (Emanuel Amuchástegui, Aljoscha Lenz and Konstantin Tselikov) entertain with clownesque charm and zappiness. That is how – apparently by chance when one of them fools around on his errand – the invitation card to the royal ball gets lost right under Cínderella’s nose.

Like the stepmother and her daughters, Neumeier has the guests at the ball depict a shallow, pretentious, cold but super-chic society for whom the impression one makes on others is their main purpose of life. Contemplating their looks, they crowd around in front of the mirror in the royal hall. 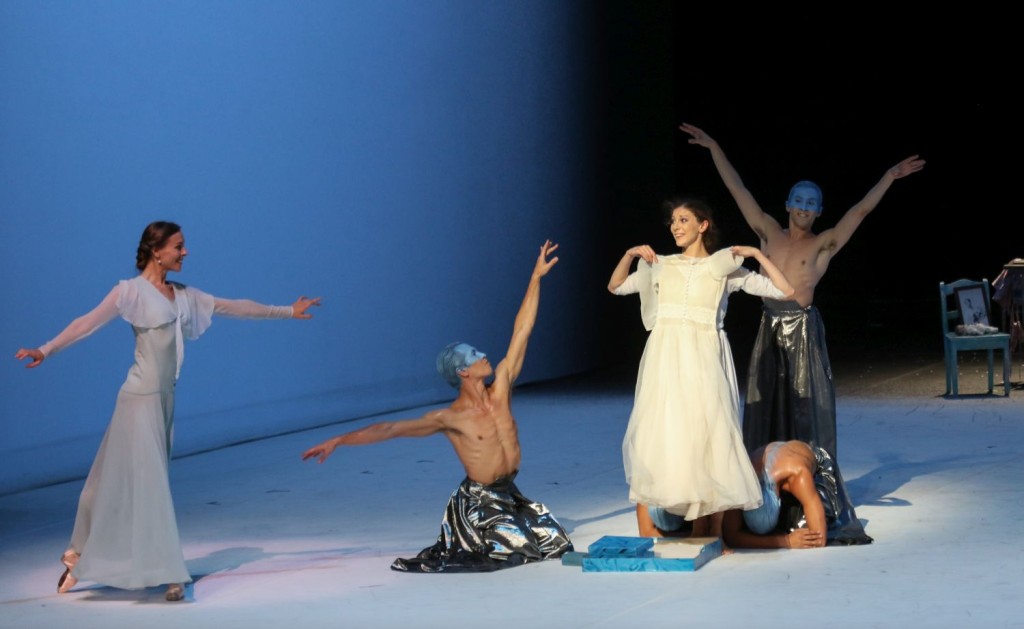 Compared to this society Cinderella (Hélène Bouchet) and the Prince (Alexandr Trusch) are diametrically opposed characters. They are outsiders. Unlike the Brothers Grimm, Neumeier strengthened the role of the Prince portraying him and Cinderella as kindred spirits. Hence more music to portray the Prince was necessary. Neumeier chose two of Prokofiev’s Symphonic pieces (“Dreams”, symphonic poem, Op. 6 and “Autumn”, symphonic sketch, Op 8) which he added to the composer’s “Cinderella” score.

According to the program notes, cross-references to Shakespeare’s Hamlet entered Neumeier’s mind when creating the role of Cinderella. Like Hamlet, Cinderella cannot accept the swift remarriage of one parent. But even if Bouchet’s Cinderella mulls over existential matters she does so in a self-controlled way. And while the Prince fights being married to one of his father’s favorite candidates tooth and nail, Cinderella outwardly submits to her fate. Under the surface she is a strong, grounded personality, yet introverted and sad, but not broken by the hostility she has to endure.
Later, after having met the Prince, her solo will echo his rebellious movements, but for the present she is her family’s house cleaner and servant. No lentils have to be picked out of the ash, instead Cinderella has to vacuum, to wash dishes and is always treated badly. At one point, serving champagne for her stepmother’s and stepsisters’ party set, she stomps angrily through the room and plants herself in front of her father as if expecting him to intervene. But to what avail? He, having put on an apron as well, has to mop and can’t pluck up the courage to talk back to his affinal ladies. One must wonder why Cinderella seems to forget her father’s weakness time after time when she’s alone with him. He loves her dearly and only when alone with her does his kind, warm-hearted nature surface. Both kid around with each other and she, again turning into a little girl, smiles happily.

Alexandr Trusch portrays a romantic, headstrong young Prince, a loner who firmly rejects all the princesses being emphatically proposed to him as potential wives. He also paints portraits and his ideal woman is the one he had drawn on his sketch block. It is – maybe according to intuition or influences of the spiritual realm – Cinderella. When they finally meet at the ball, something immediately clicks between them, but again and again Cinderella eludes him and leaves. Elegant royal society isn’t for her.

Years later the Prince, wearing a trench coat and carrying a suitcase, is seen wandering, now a lone wolf searching for Cinderella. Figures in trench coats and with suitcases are familiar from other Neumeier pieces. It is a worn-out cliche.
After losing her, the Prince’s life seems to go round in circles. He meets one girl after another but never Cinderella. At one point, sitting in his favorite tavern, the Prince, increasingly down, lays his head on his arms on the table. This moment of desperation and exhaustion was the most touching of Trusch’s performance. He is an elegant dancer with likeable charm. Yet this time, maybe because of being cast too often in the same type of role, he seemed to struggle with credibly conveying his love for Cinderella. He amiably smiled at her but with little amorous fire.

Also Bouchet wasn’t thoroughly convincing as Cinderella. A mature, experienced ballerina, she was unable to turn herself back into a young, chaste woman who is in love for the first time. From the start, the emotional chemistry between her and Trusch didn’t work. Hence when both meet again years later – Cinderella sitting like a sad bird in the hazel bush – the air didn’t crackle with joy or love. Motionless, both merely gazed at each other. Then Cinderella walks away leaving the Prince out in the cold. The scene in which she returns shortly afterwards, ready to finally stay with the Prince, thus lacks emotional backing and loses all symbolic power.

In addition to the hazel bush, which grows from a small sprout that Cinderella planted at her mother’s funeral into a stately bush in the course of the evening, set and costume designer Jürgen Rose used only a few pieces of furniture to create the surroundings: an old, wide cook stove and mustard yellow upholstery for Cinderella’s home; chairs, two plain thrones, a mirror and paintings of the Prince’s potential wives for the royal household. All this he placed in a picture-frame stage, which in fact is a lighted tent. Its sides, the ceiling and the floor, being indirectly illuminated, are the bright frame, its backside of velvety black plunges into impenetrable depth. Changes of the light coloring accompany some shifts of atmosphere. Against this black and changing white space the characters’ oddities become all the more evident.

One detail Neumeier borrowed form Charles Perrault is the oranges, which are given as presents to the guests at the ball. They are handed around and thrown from one to the other; Cinderella and the Prince handle an orange in their pas de deux as if it were an object of worship – in short, too much fuss about citrus fruits. Although it gave one a little sting in the heart, it was almost liberating to watch the stepsisters finally snatch the orange from Cinderella and immediately eat it with relish.
Among Neumeier’s dancers are some with strong acting talents. Riggins was brilliant. Actually I can’t remember him being any different during the last few years. He swept Bouchet through the air as if she weighed nothing, defying any speculations about his age. (He is forty-six.) A bouquet also to Azzoni who was an affected, calculating dame par excellence.

Good-natured Heylmann was an ideal saucy stepsister. Agüero aptly completed the nasty pair of siblings. Depicting a spiritual being, Laudere found the right balance between care and restraint. Her love seemed Biedermeier-like. As one of the ministers Tselikov again proved to be a comedian to the core. The princesses vainly trying to win the Prince’s heart were Lucia Rios, Yun-Su Park, Mayo Arii, Florencia Chinellato and Xue Lin.