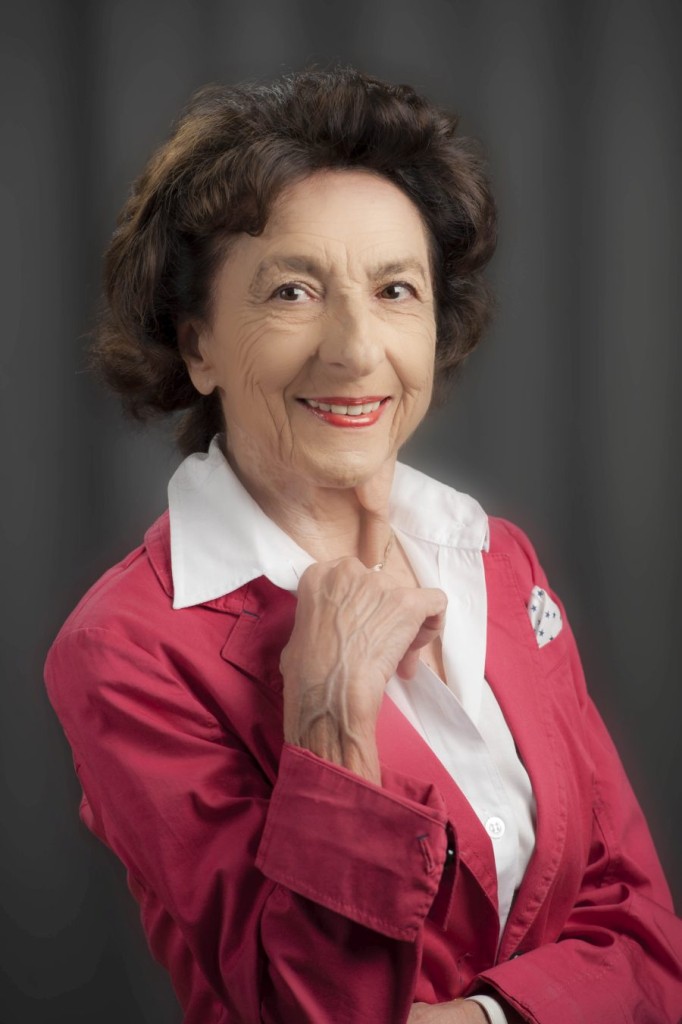 Reviving a ballet from the repertory or mounting it for another company isn’t just learning the steps. The most crucial part of the work is to make the role speak. In story ballets, the characters’ personalities have to come across authentically. Most of all the choreographer’s intentions must have priority.

Today, when starting rehearsals, ballet masters and dancers usually refer to videos of former performances. They are the perfect tools to convey a piece’s atmosphere, the steps and lifts of a pas de deux or a solo variation. Depending on the perspective of the camera they also depict group patterns. But other details are lost. What exactly is each member of the corps doing from the third line back? What is the posture hidden by the costume? Learning from videos promotes copying. But isn’t the goal to develop one’s own interpretation of the role?

Stuttgart Ballet also draws on videos when reviving old choreography. The ballet masters’ and Reid Anderson’s recollections are trustworthy too. They have danced the ballets many times themselves. But first and foremost the company relies on Georgette Tsinguirides, choreologist, ballet mistress and coach. For almost five decades Tsinguirides has ensured that the company’s centerpieces, the Cranko ballets, are staged authentically and as fresh as if just born. Excepting a very few ballets – “The Prince of the Pagodas”, for example, Cranko’s first full evening ballet in Stuttgart – Tsinguirides preserved his Stuttgart oeuvre meticulously using the Benesh Movement Notation System. 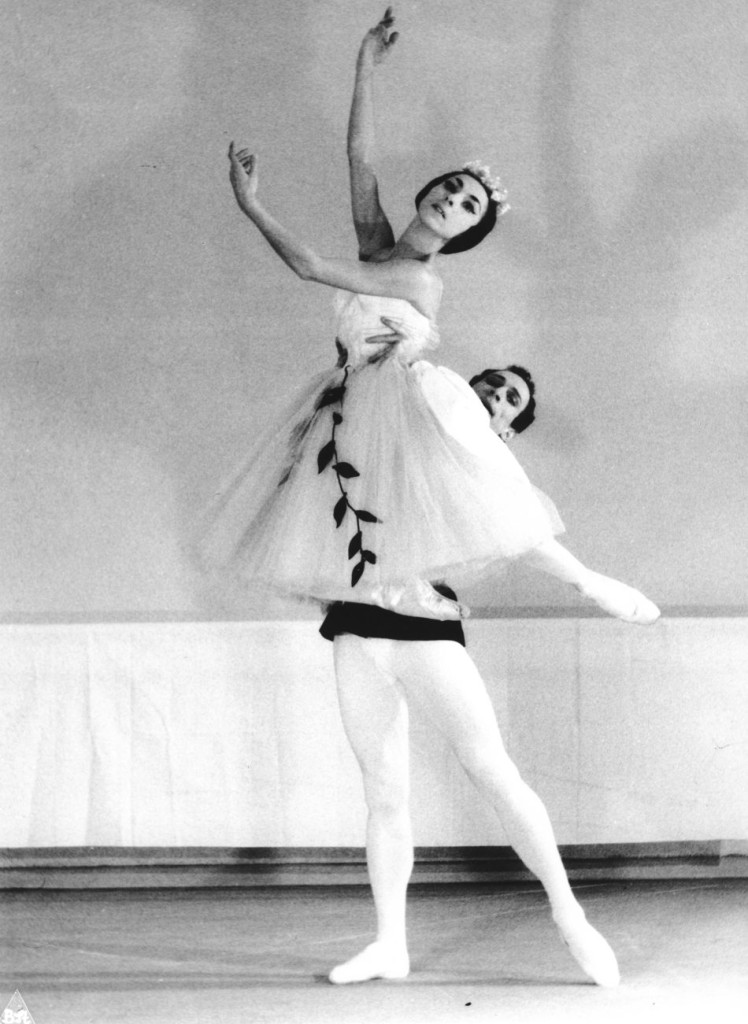 Having sat next to him in the studio nearly every day, she knows precisely what he wanted. In addition, she has stored in her memory and in notation what is in the repertory by Kenneth MacMillan and Maurice Béjart. Tsinguirides is familiar with every move, every gesture, the meaning between the lines. Perfect timing is in her blood. She also has notated set changes, props, lighting, even including the position of spotlights. In short the whole production.

Eighty-seven-year old Tsinguirides is a living treasure at Stuttgart’s State Theater. She signed her first contract as an apprentice on December 1st, 1945, a few months after the end of World War II. This December, on the occasion of her seventy-year jubilee with the company, she was awarded the Große Staufermedaille in gold, the biggest honor the Baden-Wuerttemberg ministry of culture can bestow on anyone.
Who is this petite, spry lady?
I met her in her office before a guest performance of the Béjart Ballet in Stuttgart at the end of November. Though I had arrived much too late due to a traffic jam, she receives me cordially, makes coffee, conjures up cookies out of her bag, and urges me to eat a croissant. “I’ve learned on touring that one needs to have always something with one.” I can imagine how kindly she looks after the company.
The walls of her room are full of old photos, memorabilia are arranged everywhere. The studio in which Cranko created his ballets is only a few meters away. One has to cross it on the way to her office. 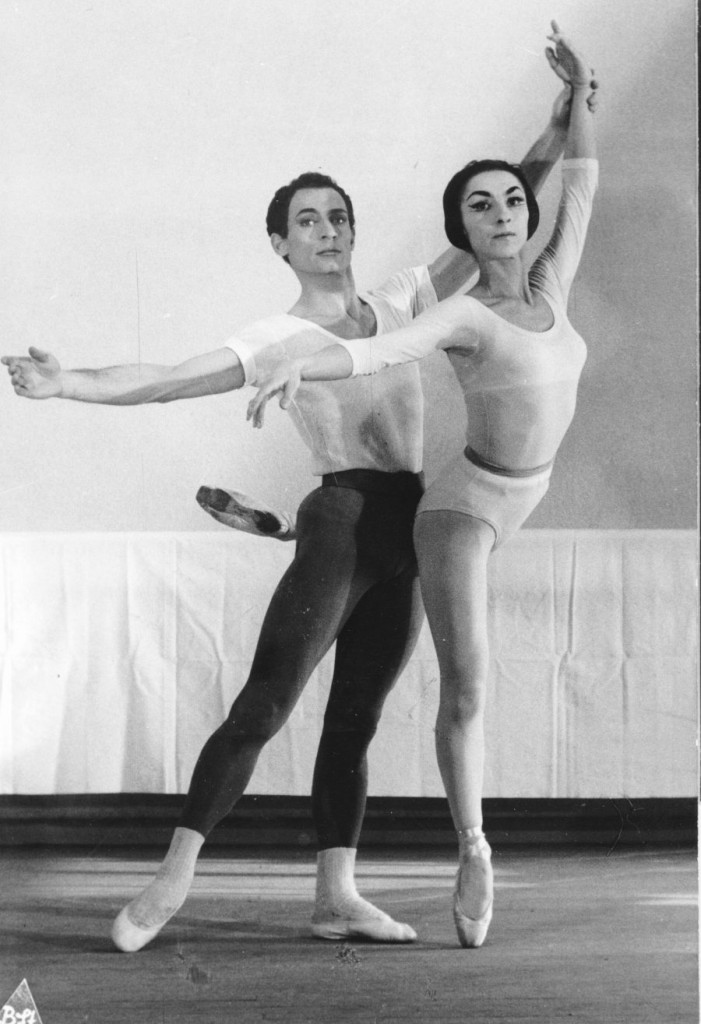 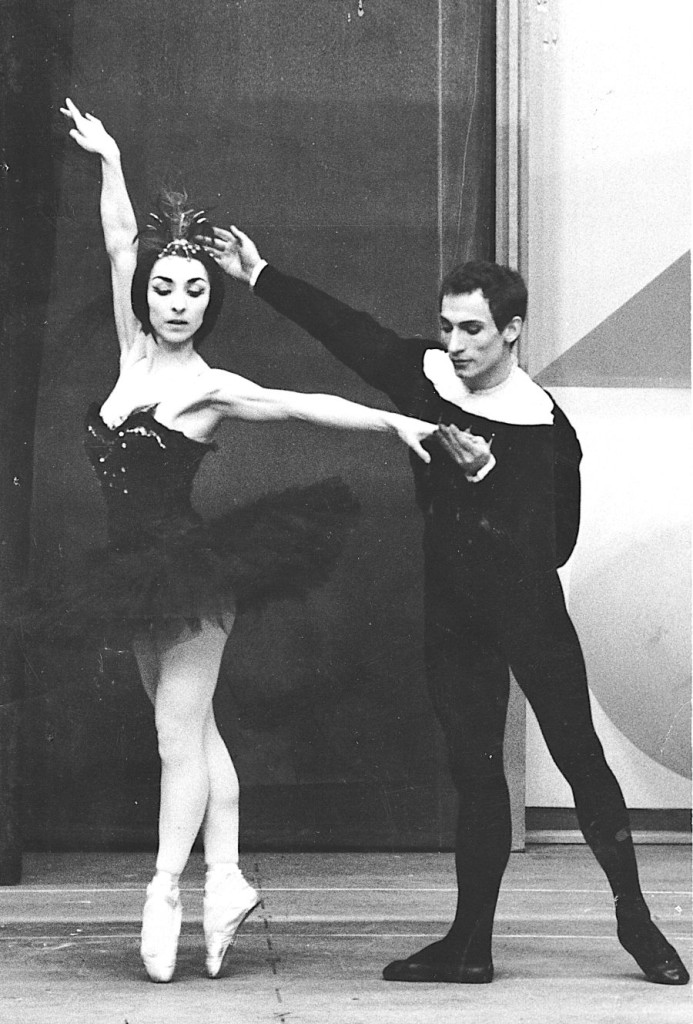 Tsinguirides was born in Stuttgart in 1928. Her mother, a German, died when she was four years old. Her father, a Greek, ran a small factory making cigarettes in Stuttgart. He later moved to Greece where he founded the first radio station. The war separated him from his family. He died in 1947 without having seen his two daughters again. Georgette and her older sister Elea grew up cared for by their grandmother. After accidentally hearing piano music coming through the open windows of the opera house, they became eager to try ballet. But taking ballet classes was frowned upon in bourgeois society. Hence the two girls stole secretly to the opera house to take their first class. Tsinguirides was seven at that time. Soon, after having noticed the girls enthusiasm, their grandmother supported them without any reservations. Hella Heim, then the ballet teacher, encouraged the girls and, in light of their grandmother’s limited means, took only a reduced fee.

Tsinguirides first premiere was in the play “Little Peter’s Journey to the Moon”. Other small roles followed. While Elea quit ballet and turned to music and painting, Georgette continued her training. In 1943, bombing forced grandmother and granddaughters to move to Calw, a town approximately thirty-five kilometers from Stuttgart. Wartime memories and the scenes of destruction are etched on Tsinguirides’s memory. One of her biggest fears was that the opera house would be bombed. But it survived. Meanwhile the young woman wasted no time thinking about her future career. She simply carried on, living from one day to the next. With the end of the war Tsinguirides returned to Stuttgart again. She first performed with a small group in American clubs and at private events. Soon, at the age of seventeen, she joined the newly established company at the State Theater. Times were difficult; the girls knitted their training tricots themselves and re-hardened their worn-out pointe shoes with shellac. But, as it is usually the case with dancers, no one made much fuss about the conditions. 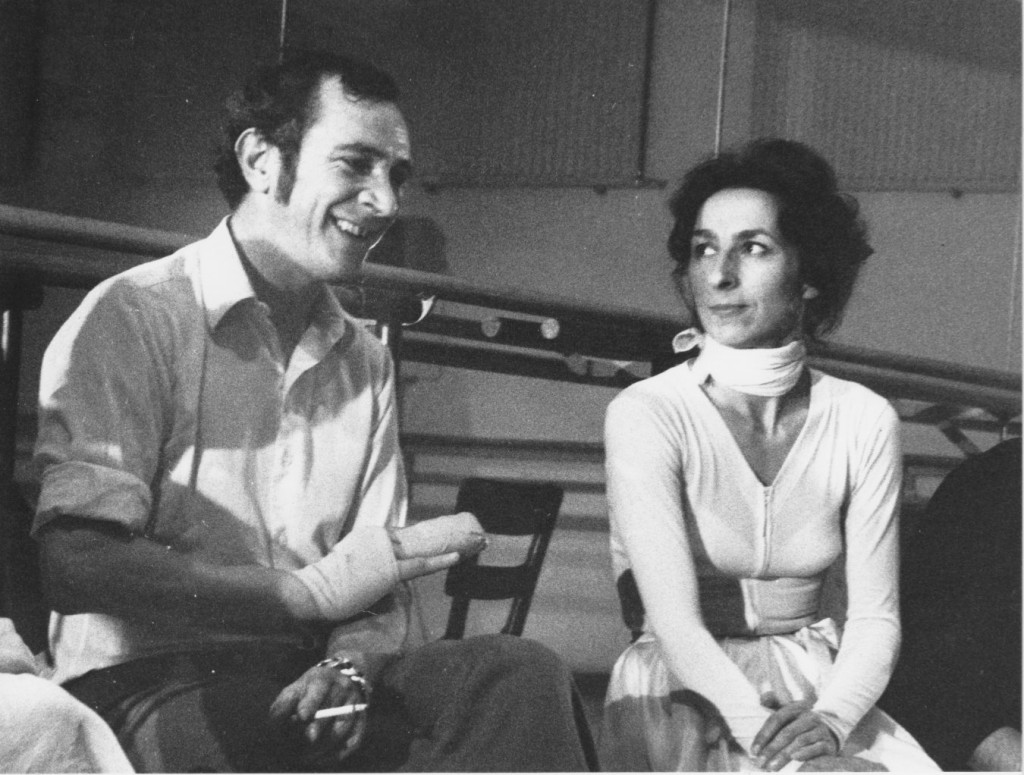 The first ballet evening at the opera was choreographed and mounted by Anneliese Mörike. In the following years there was some turnover of ballet masters. Bernhard Wosien took over in 1946. One year later he was succeeded by Osvalds Lemanis. Robert Meyer followed him in 1950. Under Meyer’s directorship Tsinguirides had her debut as Odette in 1955. However, though promoted and entrusted with solos, her salary was sparse. 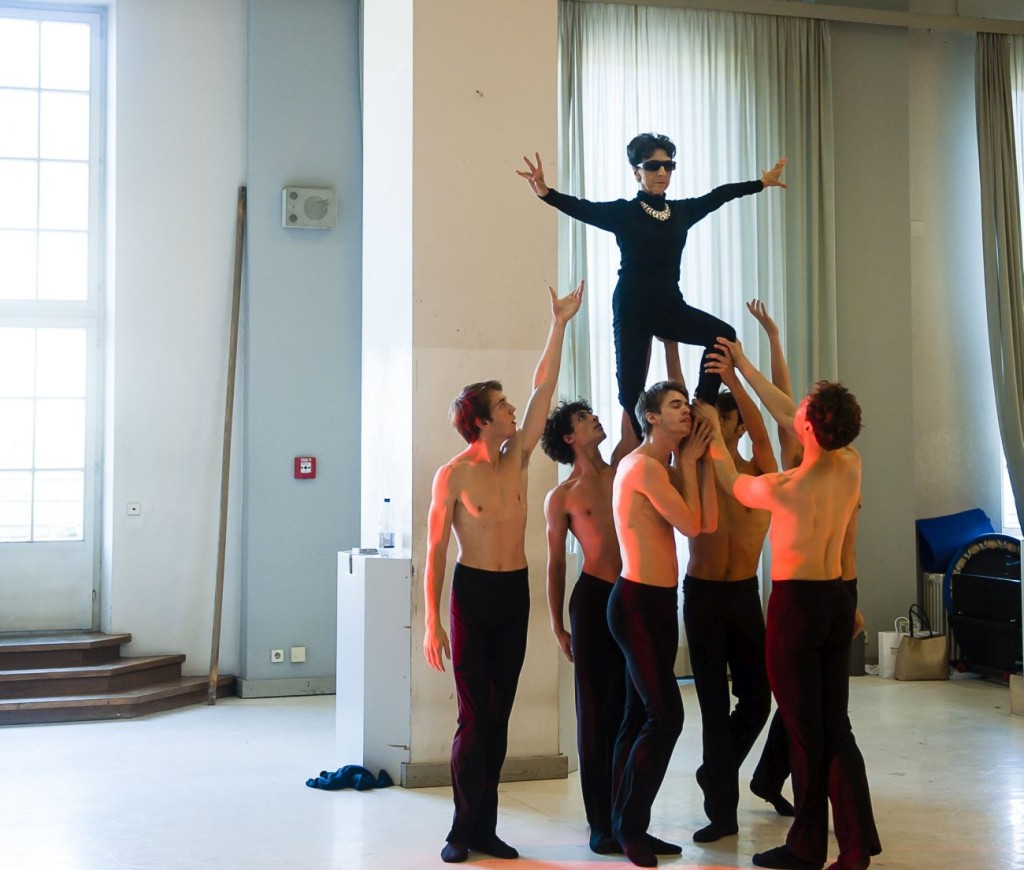 In 1960 John Cranko appeared on the scene. Beriozoff himself, feeling overworked, had suggested commissioning a ballet by the Royal Ballet’s young choreographer, unsuspecting that by doing this he had brought in his own successor. Cranko’s “Prince of the Pagodas” in November 1960 was well-received. Tsinguirides danced the second solo role. “A piece to music by Britten was completely different to what we had in the repertory before. One immediately noticed that Cranko was very imaginative”, remembers Tsinguirides. Ten weeks later Cranko replaced Beriozoff. The ensuing meteoric rise of the Stuttgart Ballet is world-renowned.

What course did Tsinguirides’s career take? She continued to dance solo parts, but Cranko saw her path leading elsewhere and not in pointe shoes. Soon he asked her to stage one of his ballets abroad, “Lady and the Fool” in Cape Town. Tsinguirides, quite clueless as to how to tackle this task, asked her colleagues to show her each role. Armed with a pile of longhand notes, she flew to South Africa. Years later she had no idea what she had meant by “Marcia’s step after funny step”, but for the moment it worked. “Lady and the Fool” premiered in 1965.
After she returned to Stuttgart, Cranko more and more often asked her to assist him in the studio and to write down what he had created. In March the same year, following MacMillan’s recommendation, he suggested that she learn the Benesh Movement Notation System in London. He had mentioned this idea casually when meeting her on the corridor. Tsinguirides assumed she would have time to think about it. But Cranko came back to her the same afternoon. “Georgette, have you thought about it? Are you going?” Taken by surprise she agreed spontaneously. “Oh dear”, she thought, “What did I say ‘yes’ to?” 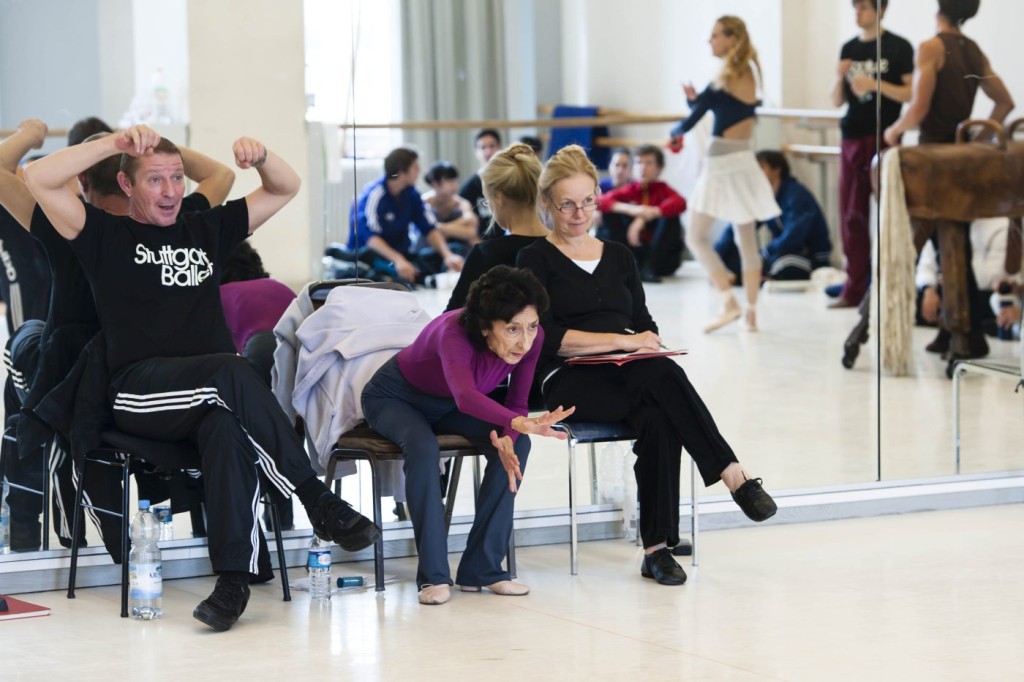 Learning the Benesh System normally takes two years. Tsinguirides managed to graduate with honors after only one year. It was a hard time. A dancer’s body isn’t made for sitting hours and hours at a work desk. Upon return home to Stuttgart in 1966 as the first German choreologist, she found work already piled up. During her absence Cranko had created “Opus 1” and “Concerto for Flute and Harp”. Both had to be notated in addition to existing ballets. Notation is time consuming. Using her time at night was necessary. Notating “The Taming of the Shrew” needed two years. Those for the first act of “Romeo and Juliet” fill, for example, more than 140 pages of tiny symbols. The original notations are stored in an fireproof cupboard in Tsinguirides’s office. They are the company’s crown jewels.

After Cranko’s sudden death in 1973 Tsinguirides was much sought after. She was Cranko’s living brain, the reference point for staging his ballets. Once Cranko had said to her “You understand the essence of my ballets. You will always be able to rehearse them.” Having already traveled a lot to stage “Onegin” here and “Romeo and Juliet” there, Tsinguirides from then on crisscrossed the globe even more. She is an old hand but she would never stage a production cold. “I prepare myself 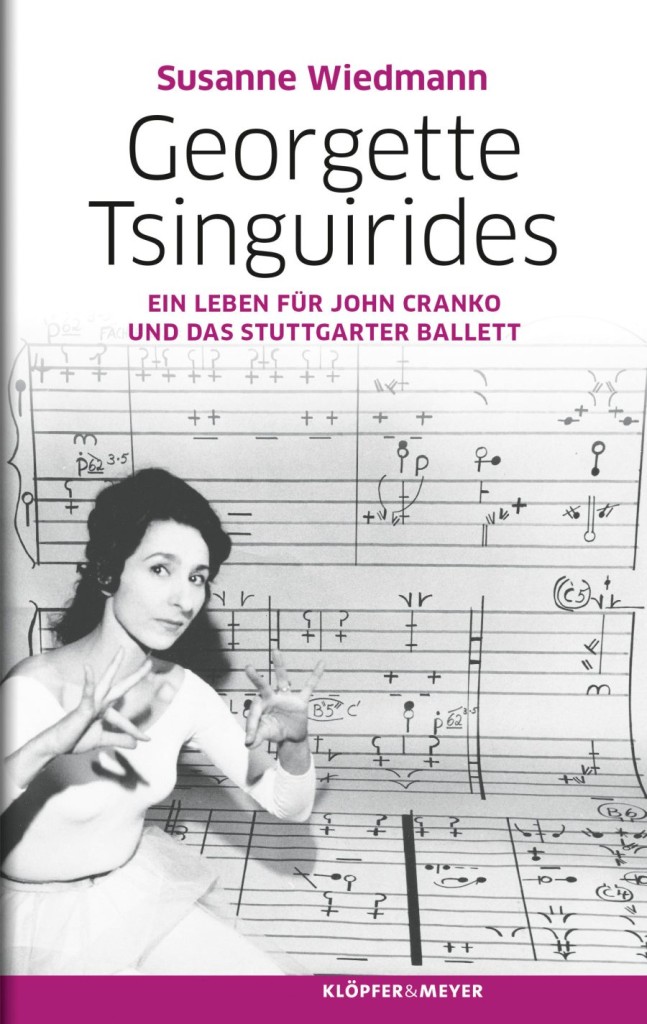 thoroughly before going into the studio. Yet one is always doubtful. And still I’m sometimes surprised at the dress rehearsal that I indeed managed it. But I wish we would have more time for rehearsals. Time is always short these days.” Day after day Tsinguirides works on a tight schedule. She rehearses ballets with a new cast and polishes up variations with an older one. She is a revered coach, loved and respected by everyone in the company, young and old. Defying any considerations about her age, she still prefers demonstrating a movement herself instead of merely talking about it. Her vitality is phenomenal, her dedication unlimited.

In her personnel life, Tsinguirides’s two marriages failed, and three miscarriages left her without children.
She doesn’t talk much about emotional scars. Railing against fate isn’t for her. “I’ve a strong belief in some higher power which is helping me along. In life one is placed somewhere, one maybe doesn’t understand the whys and wherefores, but there is nothing left than to act. Maybe things had to be like this. I don’t look for being given thanks. Thanks often comes from where one hasn’t expected it. I feel very much appreciated by the dancers. They really like me. The ‘Stuttgart Miracle’ born at the MET [in 1969\] is still manifest. I’m fascinated about what this generation of dancers carries out. Here in Stuttgart they really help each other. Of course there is competition but no distrust, no fierce jealousy. Each one of them is different. It’s my task to bring out each one’s individual talent.” 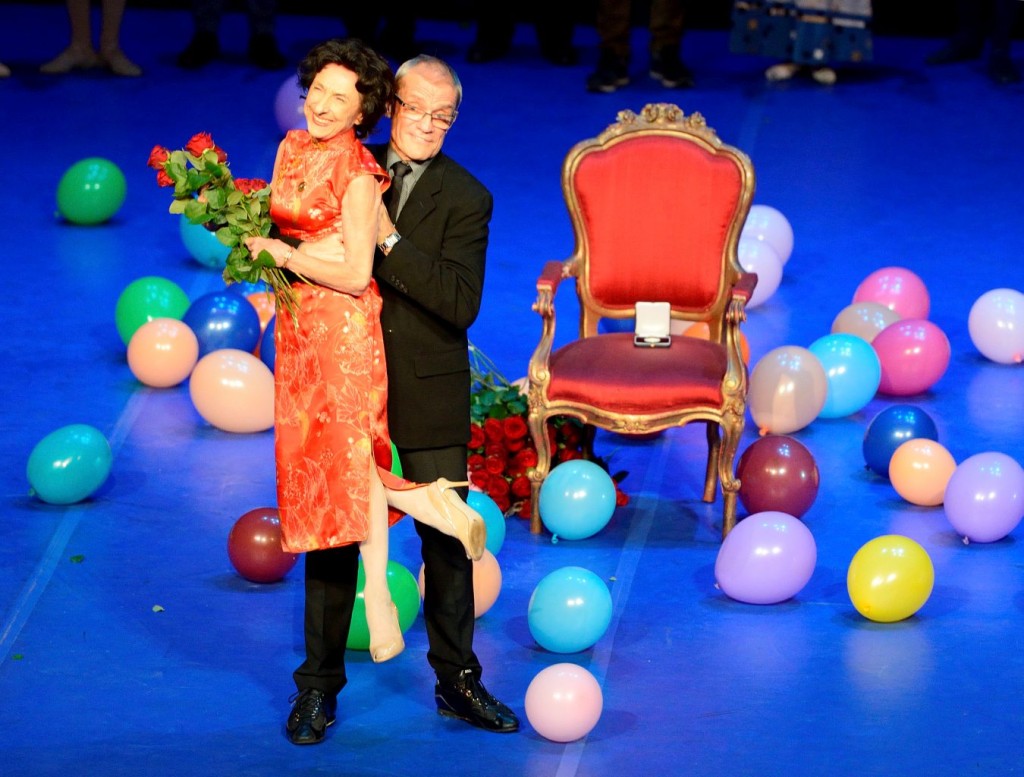 Then it was time to change from soft dance shoes into pumps. Elegant as always, Tsinguirides headed off to observe the guest company’s performance from her usual seat on the left balcony. She is imbued with a strong desire to continue. Every day. 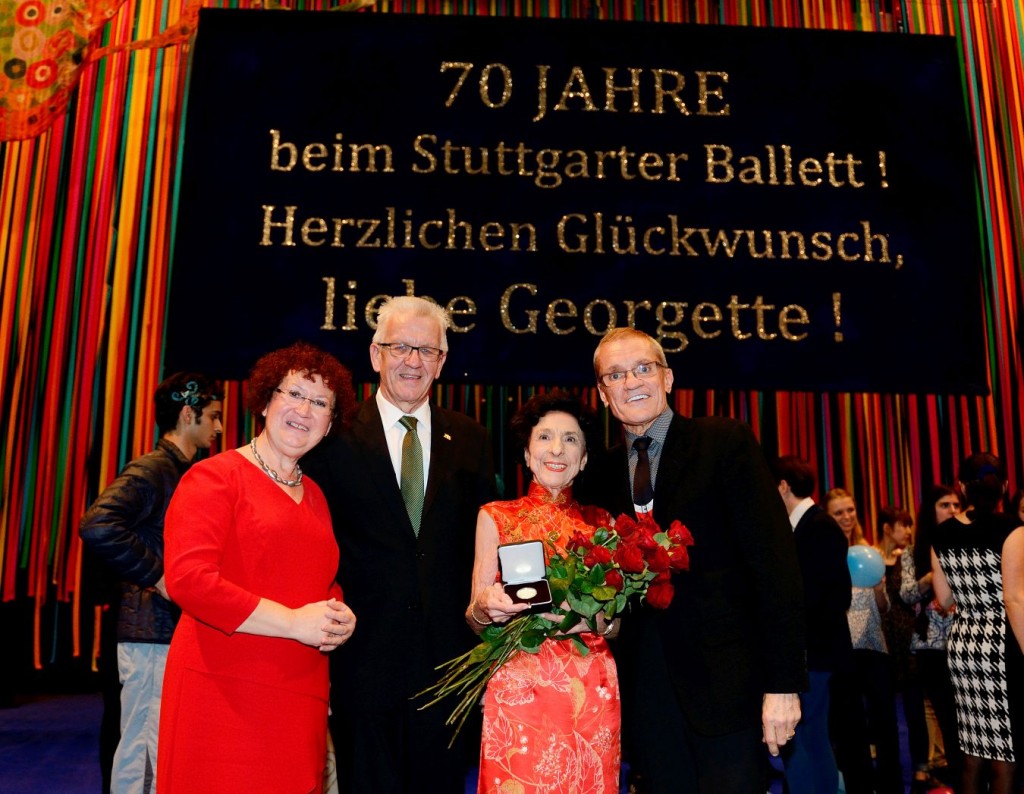 How wonderful to have a Benesh notator honoured in this way. Notators are so often forgotten in the background and undervalued. It warmed my heart to read this article. Having trained in Benesh notation, I bow in awe of Georgette’s legacy of Cranko scores. I do hope Benesh notation continues to survive so these wonderful scores will be used for generations to come. Congratulations Georgette! This recognition is so richly deserved.