The Maryinsky Fabulously Horses Around 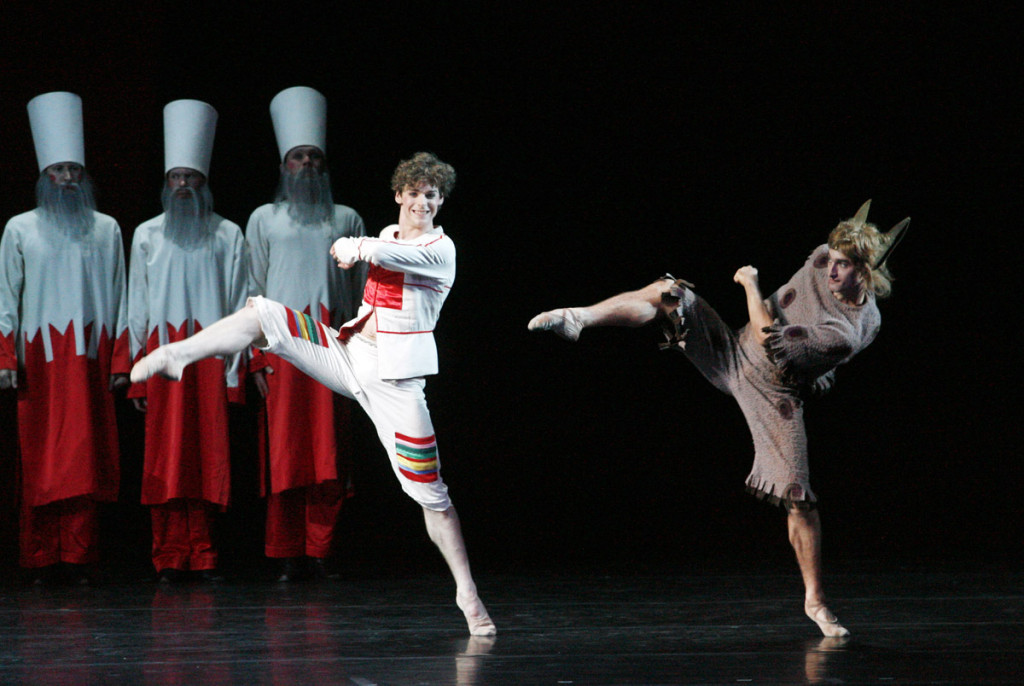 Traditionally the Maryinsky Ballet tours Baden-Baden at the end of December, offering ballet aficionados the opportunity to enjoy the troupe on the Festspielhaus’s stage during the holiday season. This time two performances of “Swan Lake”, three of “Le Corsaire” and a gala were included. The opener, “The Little Humpbacked Horse”, choreographed by Alexei Ratmansky in 2009, was extra candy in the box of treats.

“The Little Humpbacked Horse” (Konyok-Gorbunok) is a cute, fanciful and heart-warming Russian fairytale, written by Ppyotr Pavlovich Yershov in 1834. As it boldly mocks the tsar, it was rated as politically incorrect for over two decades in the 19th century. Its storyline is intricate and studded with risky heroic deeds which demand magic powers to succeed. Those are the little humpbacked horse’s domain. The human hero at its core is young Ivan, a peasant’s son, who is deemed a fool. As some unknown villain has been trampling down the crops on the family’s fields at night, the father instructs Ivan and his two older brothers to keep watch. As it turns out a spirited mare is the mischief-maker. Ivan manages to capture her. In exchange for being released she cedes to him two strong, elegant horses and a small humpbacked one, which becomes Ivan’s faithful friend.
While still in the fields Ivan encounters a flock of imposing firebirds, runs after them, coming back with a large feather as a trophy. Meanwhile his brothers have snatched the two thoroughbreds. Ivan sadly hangs his head but his little horse comforts him and promises to help him chase the brothers. They find them in a square in town where the horses have already attracted the attention of the old tsar. Ivan, revealed to be the animals’ real owner, barters them away to the tsar for the hat of the tsar’s chamberlain who from then on breathes vengeance. 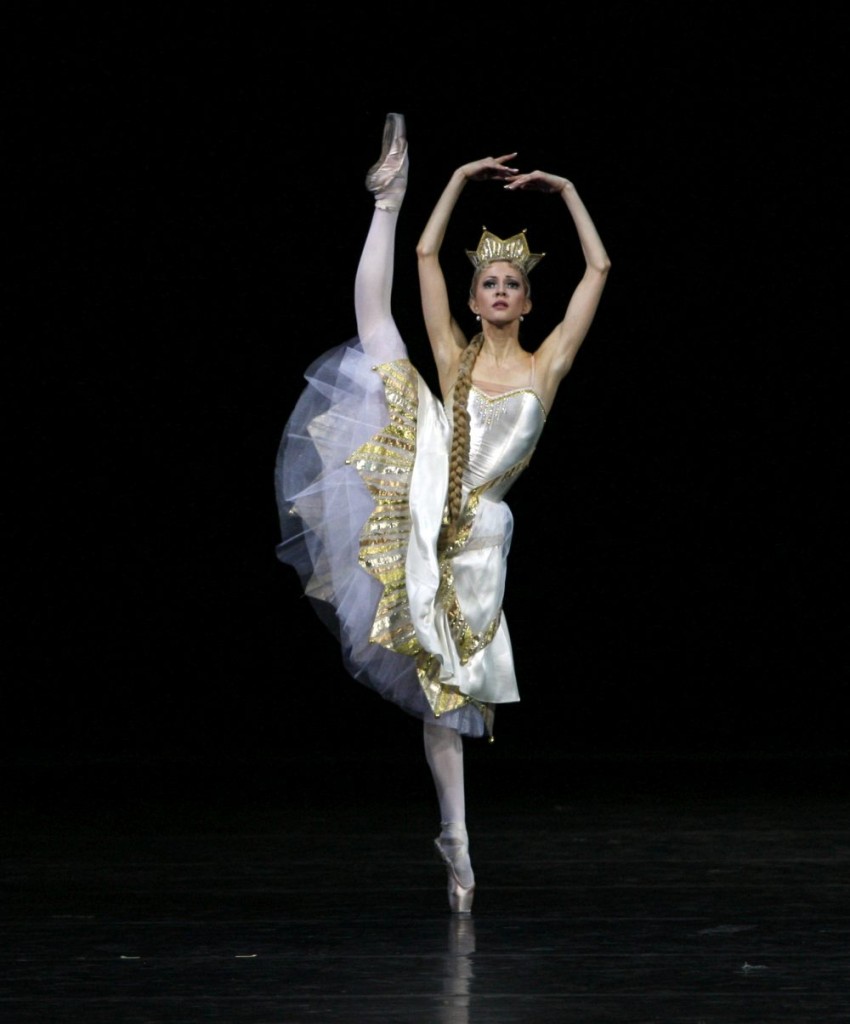 The firebird’s feather then triggers further events. It prompts the tsar to envision a beautiful young princess amidst firebirds whom he instantly wants to win. A welcome opportunity for the scheming chamberlain to even the score with Ivan. He is ordered to find her, even if she is at the far ends of the world. Helped by his horse companion, he indeed manages to bring her to the tsar’s court. But, as youth is wont, both have fallen in love with each other. So how to avoid a marriage with the old tsar?
Luckily the tsar’s maiden is resourceful. She cleverly rejects the tsar’s engagement ring, demanding another, special one. It has to have a certain jewel from the ocean bed. Again poor Ivan is ordered to get the gem. His wondrous horse accompanies him. When he successfully returns from this mission to the of the tsar’s maiden that he’s safe, but dismay that he found the jewel, she invents another pretext that she is willing to marry only a handsome man, suggesting that a bath in a cauldron with boiling water would rejuvenate the tsar. Plotting final revenge, the chamberlain gets Ivan to first test the bath. Ivan gets in the hot water but emerges as a dashing young man wearing the hat of the tsarevitch. Heartened by this, the old tsar climbs into the vat, but, alas, he is boiled to death. People mourn him but soon acknowledge and celebrate Ivan and the tsar’s maiden as their new emperor and empress. Order is happily restored.

In 1864, Arthur Saint-Léon was the first to turn the fairy tale into a ballet in St. Petersburg. The music was by Cesare Pugni. Marius Petipa and Alexander Gorsky later re-staged the piece several times. In 1956, Rodion Shchedrin composed a new score for the Bolshoi. It is said that the ensuing ballet brought him together with his future wife, Maya Plisetskaya, who then danced the role of the tsar’s maiden. Later Ratmansky used Shchedrin’s delightful and lively music in his two-act ballet.
In Baden-Baden Valery Gergiev took the baton for both performances of “The Little Humpbacked Horse”. As if he had opened a magic box, the Maryinsky Orchestra swooshed off like an impetuous galloping horse, brisk and jaunty with drums beating, trumpets sounding and bells ringing. One was readily carried away by it.

It is not easy to make good comedy which can survive being watched several times without palling. Ratmansky, though, succeeded thoroughly. Nearly every moment he keeps one’s attention focused on the stage. He draws on a wide spectrum of mime gestures to further the plot. These coherently convey quite complex contents, for example: “Who, for heaven’s sake, tramples down the corn out there on the field in the night?” All that without using one single cornstalk as a prop!

Ratmansky surprises one not only with choreographic patterns, groupings and rhythms, but with established and fascinatingly vivid characterizations of the protagonists as well. The tsar (Vasily Shcherbakov), wearing a goatee and whose hair is sparse, is a simpleton manipulated by his court. Though an old man, he has no shame lusting after a beautiful virgin. But he already struggles with his erratic heart on the dance floor with her. But one has to admit that this inventive tsar’s maiden (Alina Somova) knows how to run him ragged. His gray-haired advisers purport to have seniority’s wisdom at their command but quickly flee when things get complicated.

Islom Baimuradov is a fabulously scheming, sly chamberlain who takes perverse delight in pestering the naive Ivan (Alexei Timofeyev). Baimuradov’s black and red pants reminded me of jodhpurs. When sneaking about, he walks like a small, hunched jockey. On a few occasions the white in his eyes flashed dangerously. One had to be careful of him.
Somova, as the princess living amongst firebirds, is a beauty of a young woman. An adolescent, her emotions and moods change steadily. She is genuinely graceful, her arms’s softness seeming to extend towards infinity, until later she jumps about like a playful child. Sometimes she seems lonely and sad, then she becomes impishly gleeful as she innocently flirts with Ivan. Both capture everyone’s sympathy from the start. 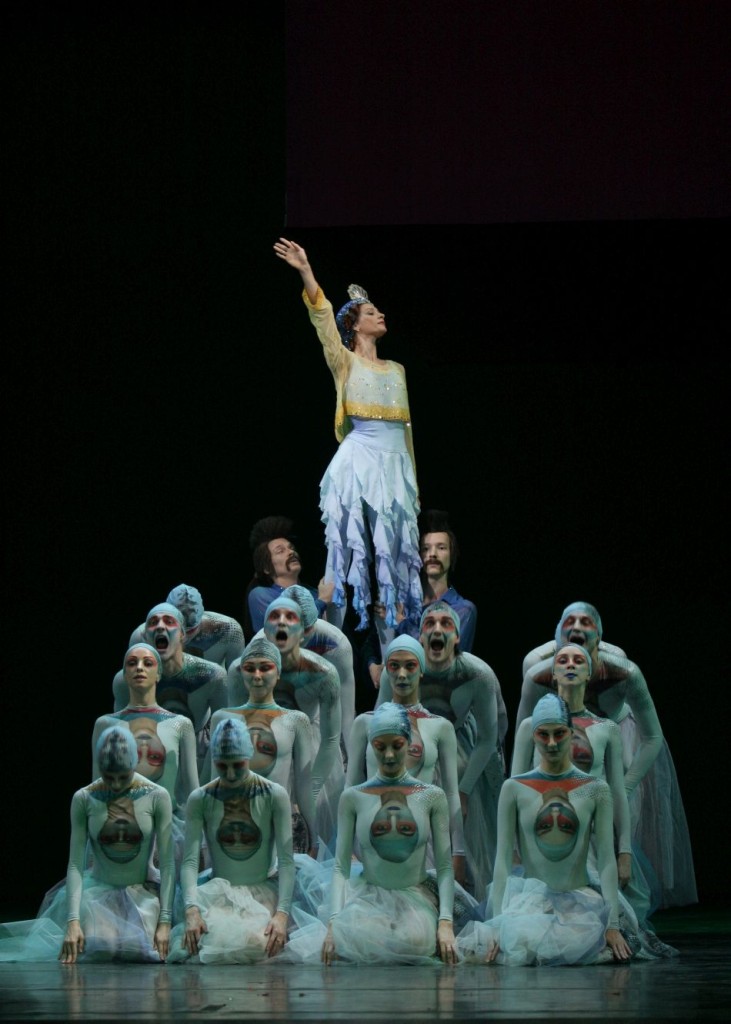 Timofeyev is a spirited, likable and boyish hero. His initial approaches to her are awkward – catching a girl by holding her braid isn’t really appealing – but he is about to mature. His first love and the hot bath bring miracles to his development. Becoming the new tsar doesn’t change his winning charisma. At the end, as the character attempting a virtuoso solo, he fails, smiles at himself, restarts and, in the third attempt, finally sails through with a great grin. Earlier in the story, when he shooed away his little faithful horse to flirt undisturbed with the princess, he seemed to be ungrateful. But his horse (Yaroslav Baibordin), having a charming puckish nature, wasn’t resentful. Their stalwart companionship was second to none.

Among other memorable scenes are the six nurses of the tsar, wearing plain skirts, wool cardigans and headscarf. They feed and pamper him like an infant (whose mouth often gapes open like a baby bird’s). Not long before, two of them, not at all shy, had perkily flirted with Ivan’s two brothers (Konstantin Zverev and Yevgeny Konovalov). So much for faithful chastity! But the two brothers, big hulks of men, aren’t as courageous and grown-up with the women as they fancied themselves to be.
Zlata Yalinich dances the role of the fervent mare, her two other horses are Andrei Yermakov and Alexander Romanchikov. She also was the sea princess who helped Ivan in finding the gem for the ring. When parting from him, she towered above her sea creatures, waving a blessing as a goodby to Ivan and his horse before softly plunging down, disappearing back into the waves.
The corps was much involved, either as firebirds, sea creatures, people in town or boyars at court.

Huge assets of the production are Maxim Isaev’s costumes and set design. He works with a few plain, cardboard-like elements: an enormous yellow moon, a yellow throne or a bright red wall at the back of the tsar’s bedchamber. The latter looks like the lid of an oversized cardboard box. If it comes down, the game would be over. Bright and brisk hues refresh the eyes. Some details – large faces printed on the front and back of the gypsies’ shirts or upside-down faces painted on the torsos of the sea creatures, as if underwater reflections – capture the right look.

The whole cast was in very good spirits, loving their horseplay. Cheers to them! This endearing, frolicsome ballet is a pleasure. Quite a number of children were in the audience. Maybe an additional performance in the early afternoon to attract even more young people would have been worth considering. 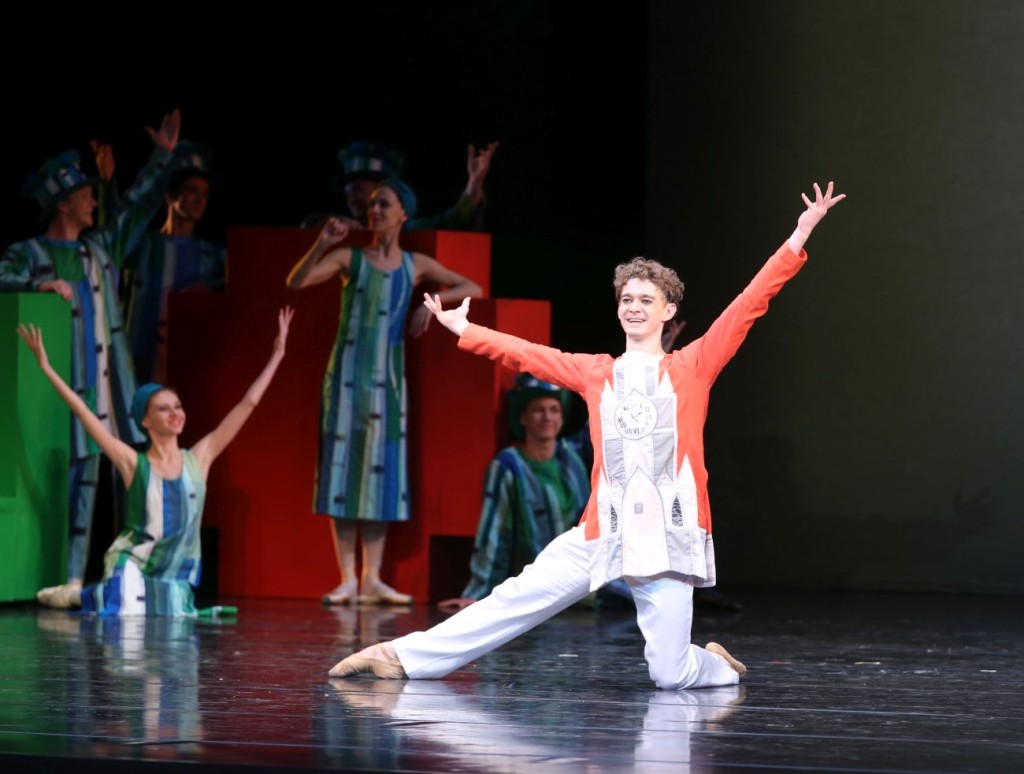