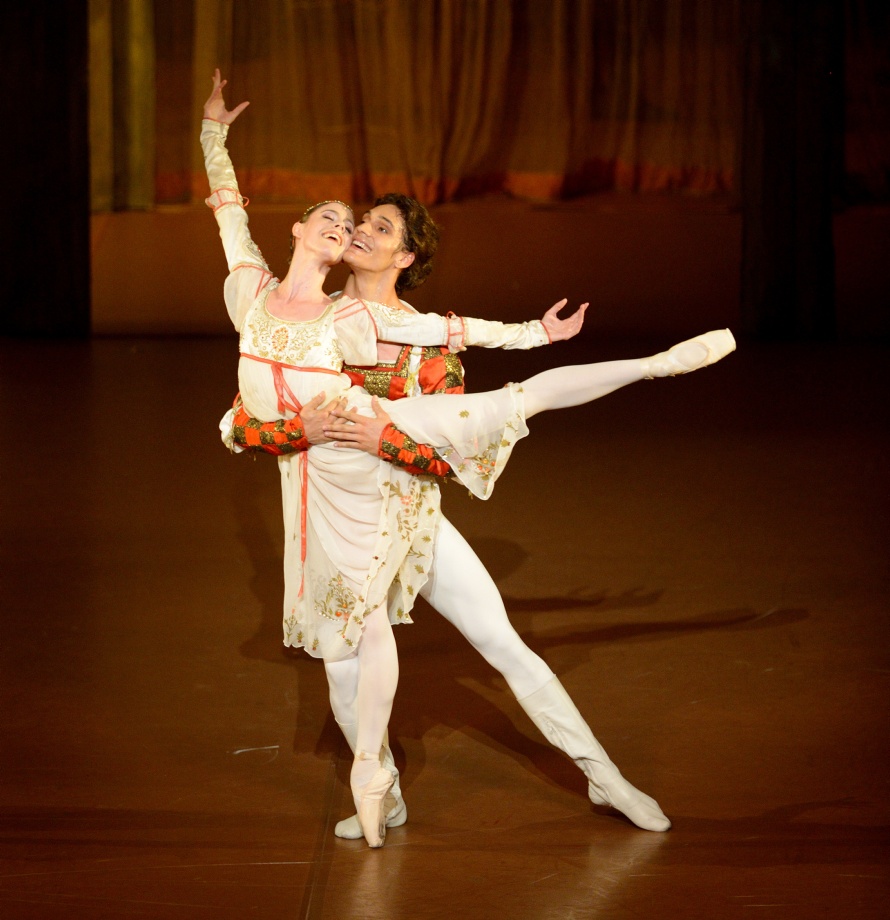 But not until the first encounter of Romeo and Juliet did the story liven up. What was the sticking point? It was not the music, even if James Tuggle and the State Orchestra Stuttgart delivered Prokofiev’s score in a less richly way than on other occasions. Certainly the dancers are not to blame. They were fully engaged. Might it be Jürgen Rose’s sets, used unchanged since the piece’s premiere more than fifty years ago? His costumes still work as do decors for some scenes: the Capulet’s ball room, the balcony tête-à-tête, Juliet’s bed chamber and the dramatic final in the crypt.
But the painted backdrops of Verona’s marketplace and the landscape scenery outside the town walls, where Juliet meets Brother Lorenzo, thwart the story’s believability. Their charm may have worked in good old Shakespearean times, when wooden planks and painted setting were enough to generate effective illusions, but today the story needs more to carry the audience away into imaginary realms. All nostalgic feelings aside, audience perception has radically changed since the debut of Cranko’s “Romeo and Juliet” in 1962. And isn’t this piece one of those meant to draw its audience entirely into the story of the lovers’ tragedy? Isn’t it meant to make everyone forget that they are sitting in an opera house?

Also stereotypes and social norms have altered over half a century. From today’s point of view, the choreography unintentionally slips twice from the tragic towards the comical: when Brother Lorenzo enters the stage wearing a dark brown habit and sandals like those of Jesus, he ponders a skull he carries. The skull is a dull memento mori. Moreover the Franciscan friar comes across as a rather ridiculous figure. But Cédric Rupp imbued Brother Lorenzo with as much religious dignity as possible. (Rupp, being doubly cast, was also the Duke of Verona.)

However, if I was Juliet he is not exactly the man I would place my last hopes on. The other awkward scene happens in the crypt. First Count Paris had entered, slumping mournfully on the right side of Juliet’s deathbed. Then Romeo rushes in and slips down on the left side of the bed, unaware of Paris on the other side. Predictably both lift their heads simultaneously over the edge of the deathbed. Their eyes meet, they stare at each other and without a second’s delay attack each other. Somehow this seemed like a misplaced gag from a silent movie.

By contrast, the dance of the girls with lilies in Juliet’s bedchamber on the occasion of her wedding day was powerfully effective because they don’t realize Juliet is lying deathlike on her bed in the background. Diligently pattering across the stage on pointe with all mannerly etiquette, the girls’ ritual dance clashed perfectly with the existential drama which had just taken place. I’ve rarely seen this scene so surreal.

That illness circulated in the ensemble wasn’t noticeable at all. Quite the opposite, the corps vigorously filled Verona’s marketplace either as maidens, merchants, aristocrats or traveling artists in carnival costumes. With the three gypsy women (Katarzyna Kozielska, Ami Morita and Magdalena Dziegielewska) leading the way, their crisp, boisterous vitality was infectious. The atmosphere quickly warmed, with swords boldly drawn in no time, wielded by Capulets as well as Montagues. The Stuttgarters are really good fencers! Where else does youth fight, while flirting and kissing as they fly here and there around the stage.

Martí Fernandez Paixa’s Mercutio, Romeo’s friend, was especially adventuresome and carelessly incautious. Curly of head and a perky tease, he also had his debut this evening, fated to die twisting in pain from a sword wound inflicted on him by Tybalt. A heart-rending moment! Louis Stiens as Benvolio, the second companion, kept a watchful eye on Romeo, helping him hide his identity at the Capulet’s ball and urging him to flee after he has killed Tybalt, Juliet’s cousin. He was portrayed by Matteo Crockard-Villa. He could easily make him ooze with irascibility a bit more to underscore Tybalt’s choleric character. David Moore made Count Paris, who is sometimes portrayed as effeminate, an attentive, loving husband to-be. But common, peaceful marital bliss wasn’t according to Shakespeare’s intentions. 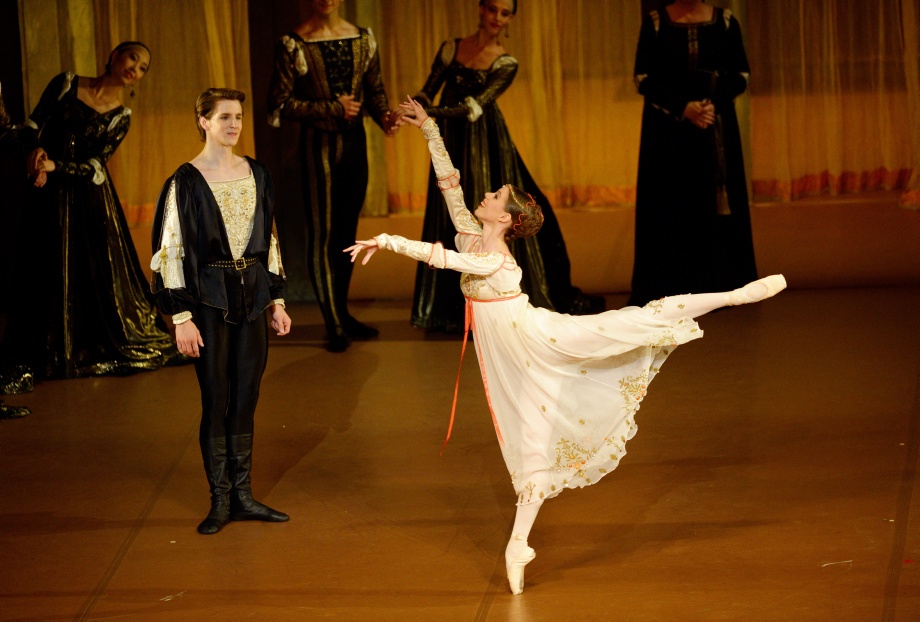 Juliet’s father, Count Capulet (Rolando D’Alesio) seemed to have a divided character. On one hand he intervenes and defuses a confrontation between Romeo and Tybalt at the ball, on the other, he is as cold as ice when his daughter beseeches him to cease trying to force her into an undesired marriage. Countess Capulet (Melinda Witham) was actually stirred by sympathy for her daughter, but only one look from her husband turned her face to stone. Sonia Santiago in the role of Juliet’s kind-hearted nurse had a fabulous scene as she delivered Juliet’s letter to Romeo. The youth fooled her playfully about his identity which she took good-naturedly but, soon being swirled around and kissed by the overjoyed Romeo who had read the letter, she was, after all, flabbergasted.

Romeo and Juliet, portrayed by Badenes and Camargo, combine a talent for natural acting with an excellent technique. Attuned to each other like two halves of a whole, their stage partnership is gorgeous.
In the few days that her romance with Romeo takes place Badenes’s Juliet matures from a playful adolescent into a woman faithful to her love no matter what. Badenes’s character was a well-bred and fun-loving Juliet, a sweet young woman, using her charm although scarcely aware of it. In any case, she flirts effectively with Romeo at the ball even if her fluttering feet reveal her nervousness. Becoming aware of him has a liberating effect on her, making her breathe lighter. She glows from the inside. Juliet’s talent to distract leery disturbers on her way to meet Romeo apart from the party guests is amusing. She pretends to enjoy herself in animated dance, leading the unwelcome visitor’s attention as far as possible away from the spot where Romeo hides behind a pillar.
Later her initial shyness at the balcony rendezvous quickly vanishes. Trustfully she gives herself into Romeo’s hands. Lifted by him she flies light as a feather, snuggles up to him and in the next moment both are like playful children bursting with happiness. After having spent the first night together, the intensity of strong emotions filled the air. But confronted with her duty to marry Count Paris, Juliet is forced to find her true strength. Her maturing process is poignant to watch. She looks vulnerable, completely desperate, a fragile person with tangled hair, shaken by fear to take the potion. Clinging to her remembrance of Romeo she carries out the dreadful task. A crypt is an hideous place to wake up. Juliet’s silent scream when finding Romeo dead pierced one’s brain. Her eyes were blank at the end. She had no other option than to follow her love and stab herself.

Having someone like Camargo in a company is a piece of luck. He is a brilliant dancer – when others turn two tours, he does three and those three are sparklingly clean. He never plays it safe but always tries pushing beyond the envelope which sometimes causes his audience to hold its breath. But there is no need. This Brazilian constantly proves the saying “No risk, no reward” right. His interpretation of Romeo demonstrated a young man’s full range of emotions. Before meeting Juliet, he has a crush on Rosalind (Anouk van der Weijde) and, irresistibly charming as he was, flirts with others too, but how different his feelings become once encountering Juliet! Love strikes his innermost being.
At the beginning of the balcony scene Romeo’s initial confusion clears. Having just helped Juliet down from the balcony, he turns away from her. Visibly he takes the responsibility for his love in this moment, inwardly saying “Yes!”, decisively “Yes!”. Beside himself with joy he bursts into rapturous leaps and jumps and turns, radiant with happiness. Camargo also strongly conveys other facets of Romeo’s personality, such as his wild rage with which he takes vengeance for Mercutio’s death and his deep sense of guilt after having killed Tybalt. Although easy-going and sportive, the camaraderie between him and his two friends basically rested on quite strong bonds.

What I experienced for the first time were Camargo’s strong vibes, his hold on the audience. Even before the curtain went up for the third act, anticipation of his presence filled the auditorium.
Camargo has outstanding talent and, what speaks well of him, he is very modest. I’m curious how his career – he is in his mid-twenties – will develop. Quite likely, doors will be open for him.

Complements to the dancers for keeping Cranko’s “Romeo and Juliet” fresh, lively and, above all, touching. 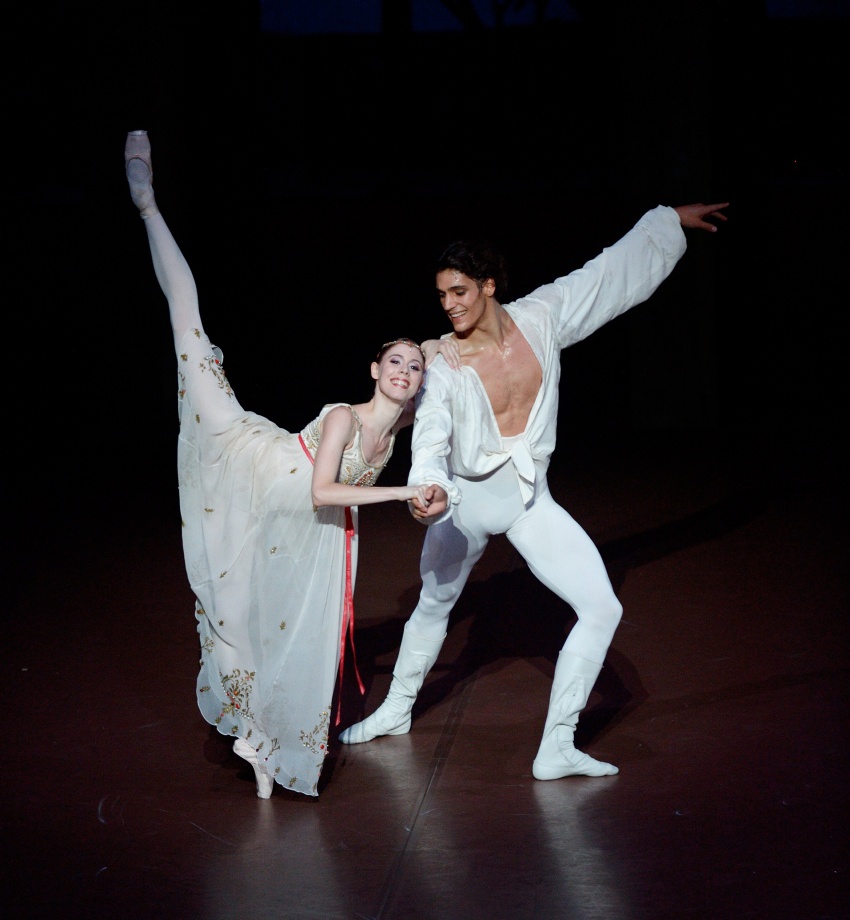