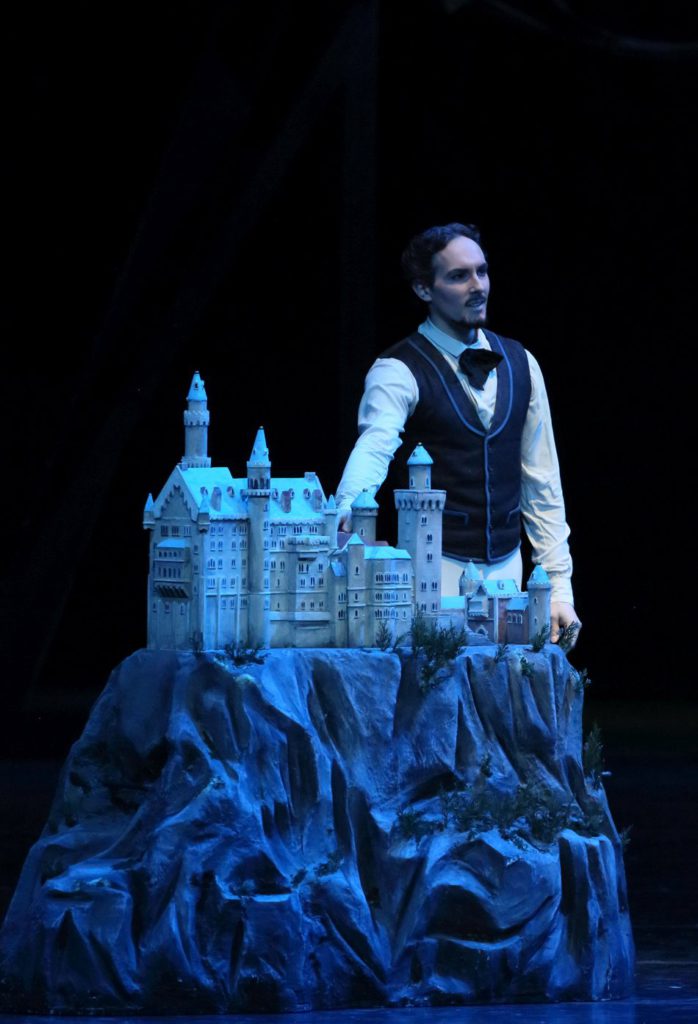 Parallels between Ludwig II and the ballet’s Prince Siegfried and also with composer Tchaikovsky are striking. Ludwig II struggled with being homosexual, as did Tchaikovsky. Unable to fulfill his love, Ludwig II yearned for an ideal – like the story’s tragically impossible love of Siegfried for a swan maiden. As a result, Ludwig II substituted grandiose building projects, often unfinished, for the routine of ruling Bavaria. He also indulged his extravagant passion for art. Today, his castles – Neuschwanstein, Herrenchiemsee and Linderhof, — are tourist magnets. The swan motif turns up in those edifices. Ludwig II was also an admirer of Richard Wagner and imagined himself as Wagner’s Swan Prince Lohengrin. He shunned public obligations, secluding himself at private performances in the court theater. 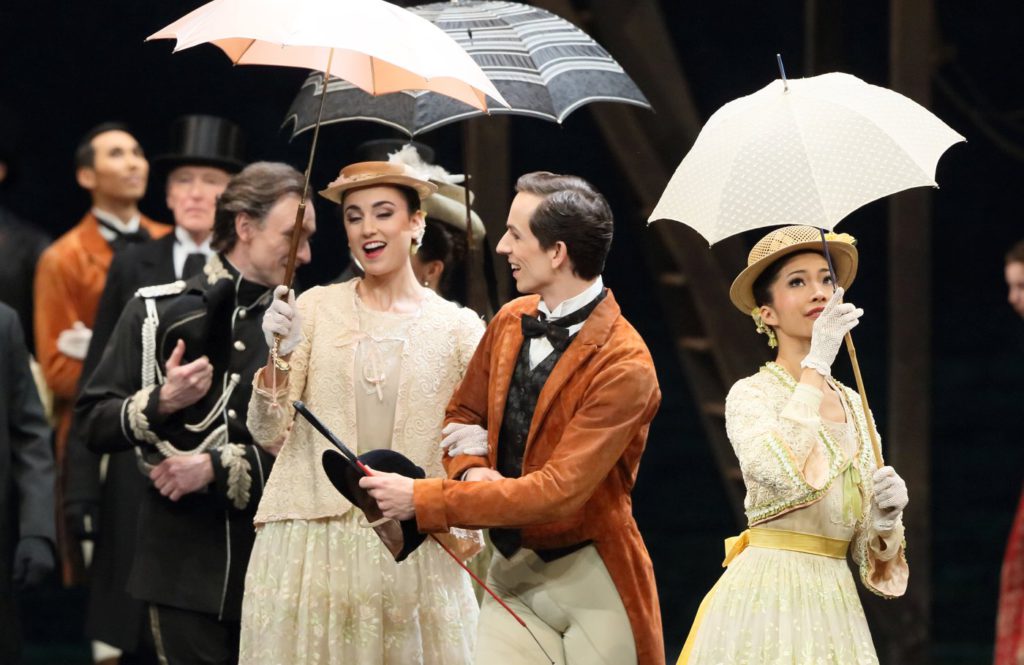 In 1886 the medical health officer Bernhard von Gudden declared Ludwig to be paranoid and mentally deficient. That diagnosis is deemed invalid today. The King was imprisoned at the family’s castle Berg. Ludwig and van Gudden died together in Lake Starnberger. The circumstances are unclear. Presumably the two men fought each other.

Neumeier wove all that into a sophisticated libretto which works like a charm. Beginning with Ludwig’s imprisonment, the story unfolds in his memory with three flashbacks. The prison replicates unfinished side rooms of Herrenchiemsee Castle which Neumeier and Rose accidentally got to see during a visit. 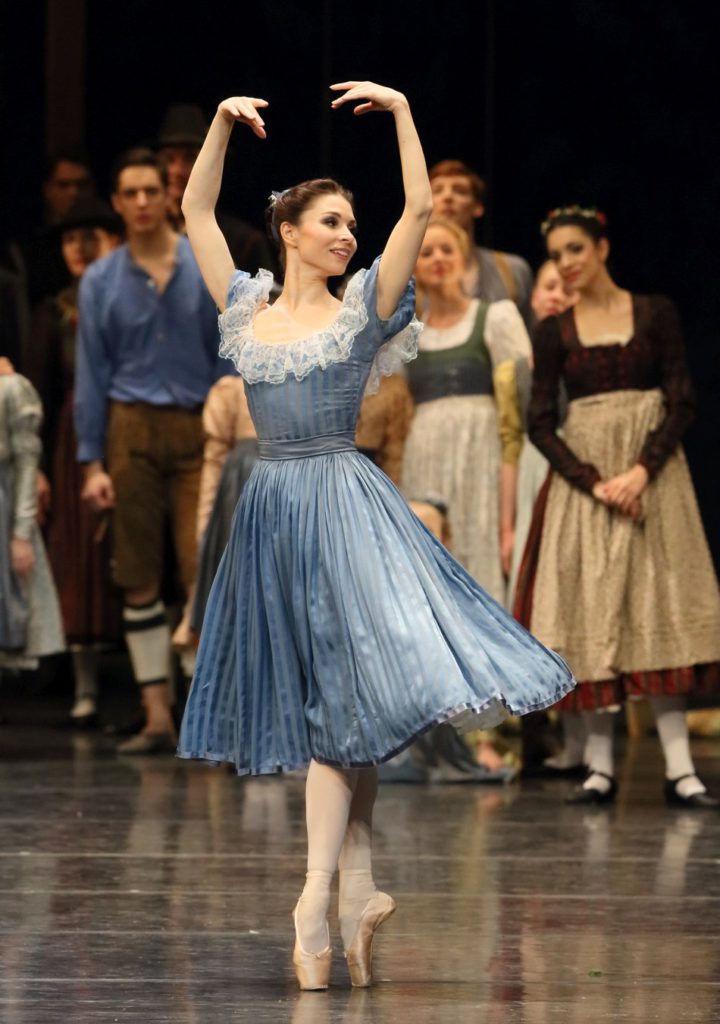 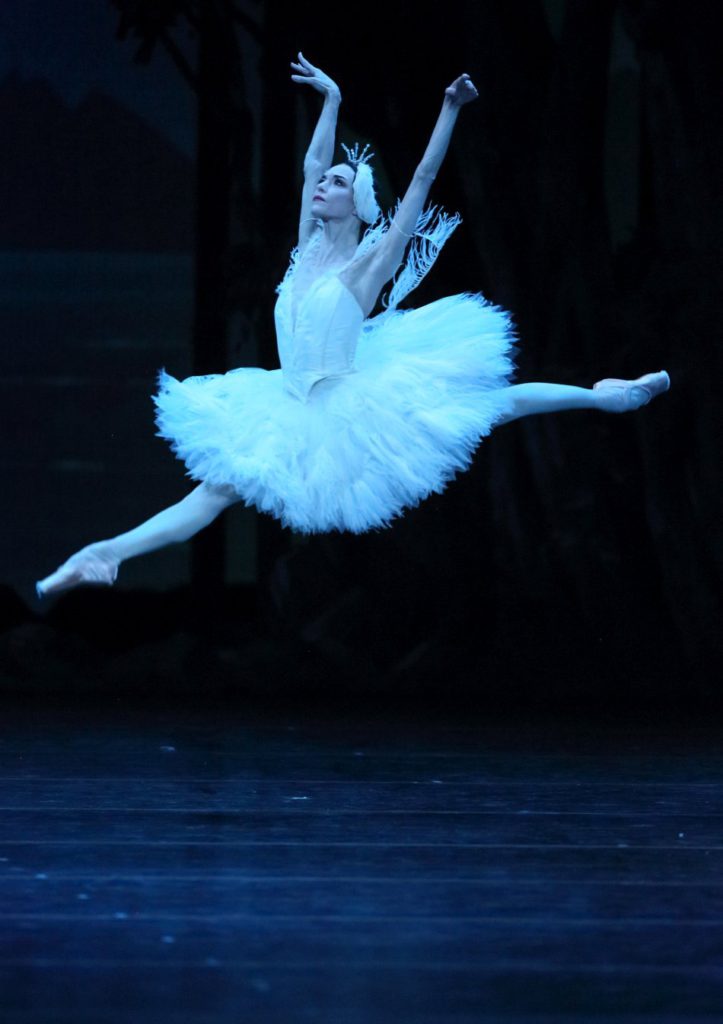 The first flashback climaxes with the opening ceremony of the grand new building. High Alps loom on the backcloth and a large wooden scaffolding frames the stage. The scaffold remains through much of the ballet and symbolizes the King’s unsuccessful attempts to construct his own reality. Sportive craftsmen, peasants in leather pants or dirndls dance while children have fun. The arrival of the King’s Mother and his fiancée Princess Natalia mars the happy feasting. Relations between Ludwig and his mother are frigid. There is practically no relationship between Ludwig and Natalia, whereas the King’s close friend Count Alexander is deeply in love with Princess Claire. 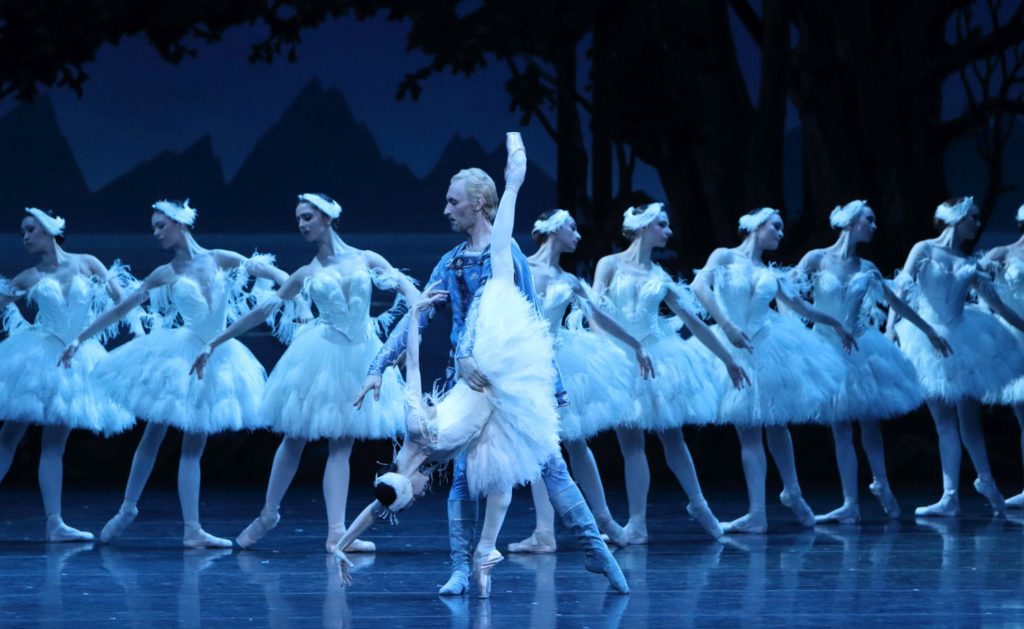 The second flashback is prompted by the stage model for the ballet “Swan Lake”, which the King keeps stumbling across in his prison. The walls of the prison part to show a grotto that opens onto a lake. The lake is a reference to the Chiemsee where Herrenchiemsee is situated; the grotto alludes to the Venus Grotto of Linderhof Castle. A private ballet performance is being given for the King. For this, Neumeier combines Act 2 of the classic “Swan Lake”, as a ballet within the ballet, with Ludwig becoming involved in the action. Ludwig identifies with Prince Siegfried and his love for Odette. Secretly the Princess Natalia observes the King. She sees his intense feelings and is bewildered. 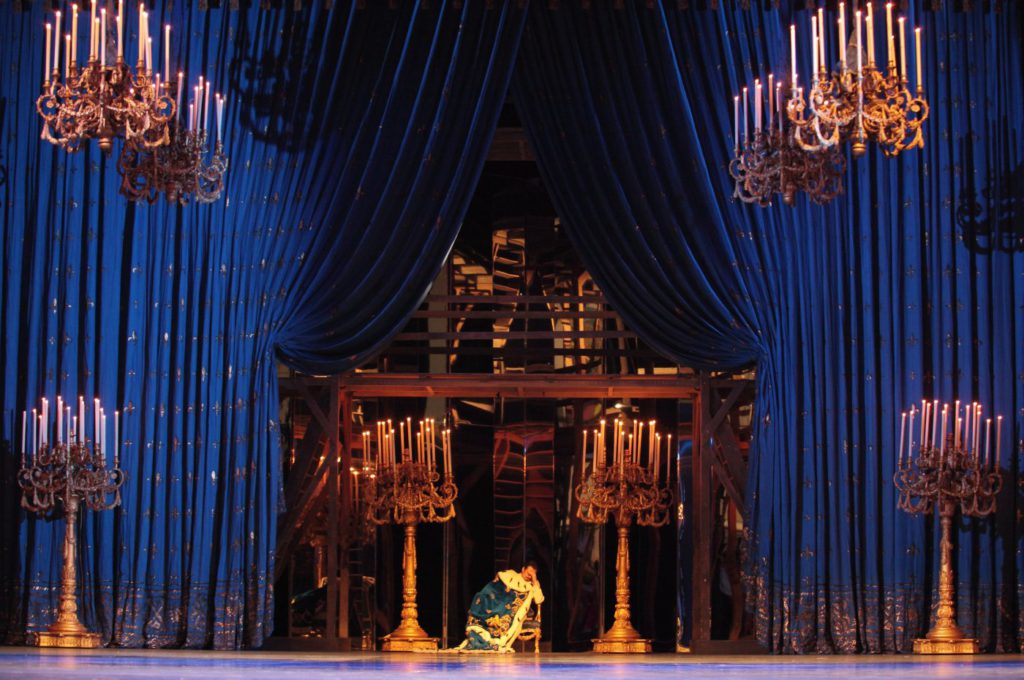 The third event remembered by the King is the masked ball which ended with his arrest. This gives Neumeier the chance to show divertissements, as in the traditional ballet. Princess Natalia puts on a swan costume to win Ludwig’s heart, but she becomes Odile instead of Odette. A key figure appearing throughout the action is the Man in the Shadows, the King’s alter ego. He turns up unexpectedly, out of the dark or transformed from other figures, and reminds the King of his failures and sexual misconduct – an inexcusable sin. Considering the King’s disturbed relationship with his mother and his search for true love, the grandiose projects he starts and his peculiar behavior are, presumably, attempts at compensation.

The King fears the Man in the Shadows but also capitulates by sinking into his arms. In the ballet’s last scene, the two men fight. Ludwig surrenders. A huge wave covers both. For this, ingeniously, Rose had a large cloth of blue silk descend from the ceiling. It billowed like the surface of a wind swept lake. On this evening the wave seemed especially ominous. 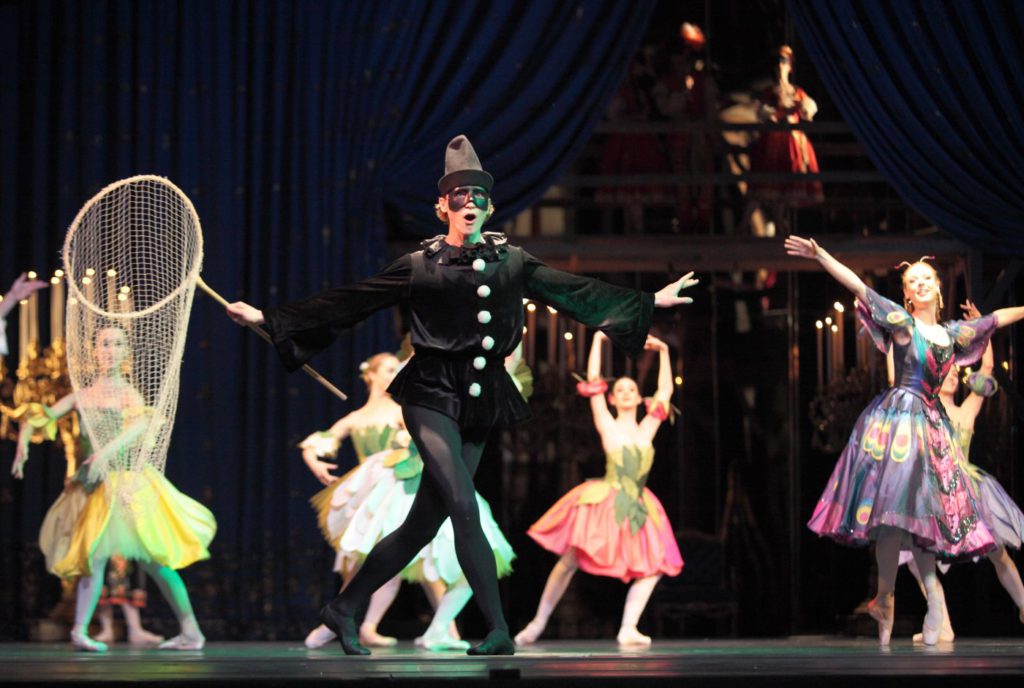 Matej Urban poured himself totally into the role of the King, Ludwig II of Bavaria. He conveyed the monarch’s feelings and his life’s tragic truth. Even though Urban’s Ludwig was playful when fooling about with Count Alexander (Adam Zvonař), he froze in the presence of his mother (Zuzana Zahradníková) and of Princess Natalia (Ekaterina Petina). Sometimes etiquette saved the situation for him but, increasingly, he would lose his temper. Self-recrimination, desperation and fear alternated with moments in which he clung to his dreams and ideals.
Possible sources of true love attracted him intensely. That is why he was drawn to Count Alexander and Princess Claire (Mai Kono). Urban’s King would have given anything to be affectionate with Natalia but couldn’t overcome his disgust. His only moment of happiness and relief with Natalia was at the ball when, for a moment, her swan costume made him believe he could love her after all. The King’s loneliness was poignant. Urban had many emotions to navigate and didn’t shirk from them. He deserves much appreciation! In a recent interview Urban claimed that he had constantly to fight to polish his technique. There was no sign of a flaw, only of skill. 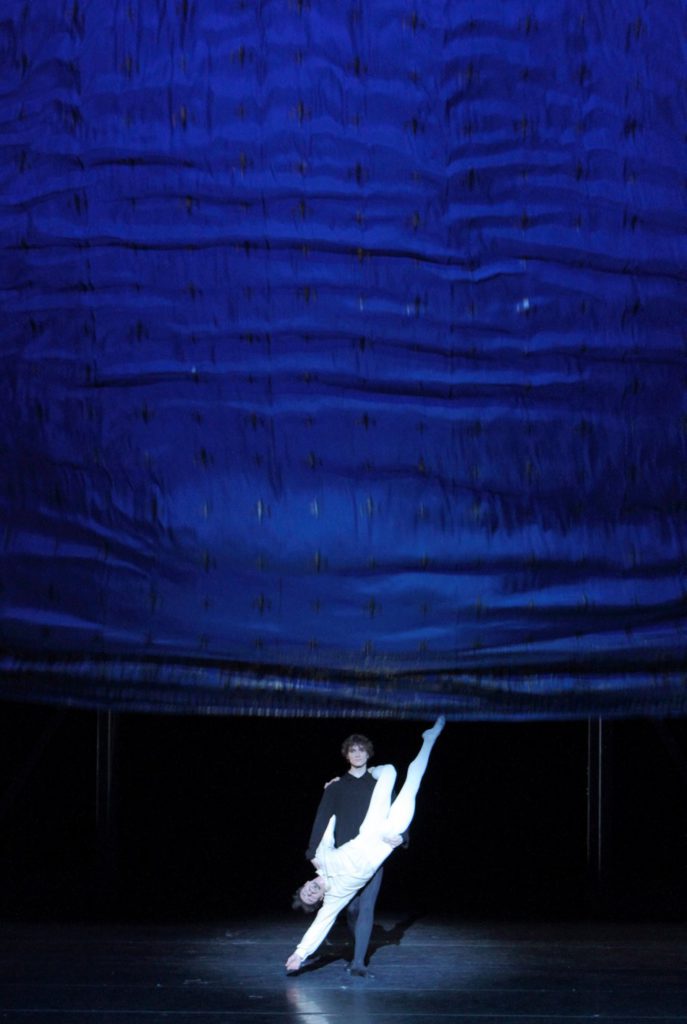 A bouquet goes to Petina for her admirable dancing as Princess Natalia. She did everything to make falling in love easier for the King. It pulled at the heart strings when she finally gave up. Natalia was Petina’s last role with the company.
The Man in the Shadows was Marlon Dino. He also leaves the ensemble along with his wife Lucia Lacarra, who danced Odette. Both will join the ballet company in Dortmund. Lacarra’s white swan was technically fine but not fueled by inner fire. She had an overall brittle appearance. Her arms are delicate but, by over-undulating them, she brought her performance close to a state of mannerism. The dancing of the corps of swan maidens was orderly.

Cyril Pierre, bewigged as a blond Prince Siegfried, was a keen hunter yet also a very decent sort of nobleman. Pierre will join the faculty of the Kirov Academy of Ballet in Washington, DC.
Ilia Sarkisov led the carpenters at the building ceremony and did so cheerfully, with a waggish sense of humor. He, too, was bidding farewell to the Munich stage.
The third act’s divertissements were danced with gusto. My special favorite was the Butterfly (Antonia McAuley), whose wit helped her elude Marlon Dino’s catcher.

Among the corps, there were farewell performances by Martina Balabanova, Alisa Scetinina, Lisa Gareis, Vittorio Alberton, Ilya Shcherbakov, Olzhas Tarlanov and Zoltan Mano Beke. Peter Jolesch, after forty-five years with the company, also retired from stage.The children’s group, which mingled with the guests at the building ceremony, won’t have an opportunity to perform with the company next season. 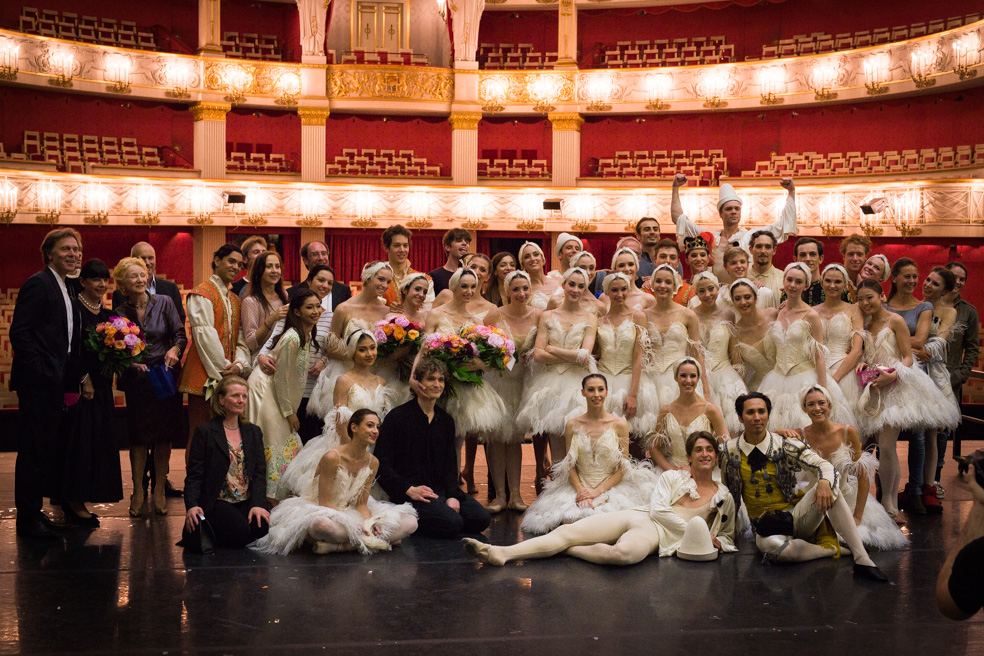 The Bavarian State Orchestra gave an orderly rendition of Tchaikovsky’s score, though I would have preferred a less varied volume. Michael Schmidtsdorff, conducting, elicited a few trills and tones that I’d never heard before.

Ivan Liška said his goodbye not only to all the dancers who are leaving but also thanked his wife, Colleen Scott, for her commitment as the company’s ballet mistress for eighteen years. Scott is withdrawing from that position at the end of the season. Liška also acknowledged Irène Lejeune, a company sponsor from 2008 to now, but no longer.