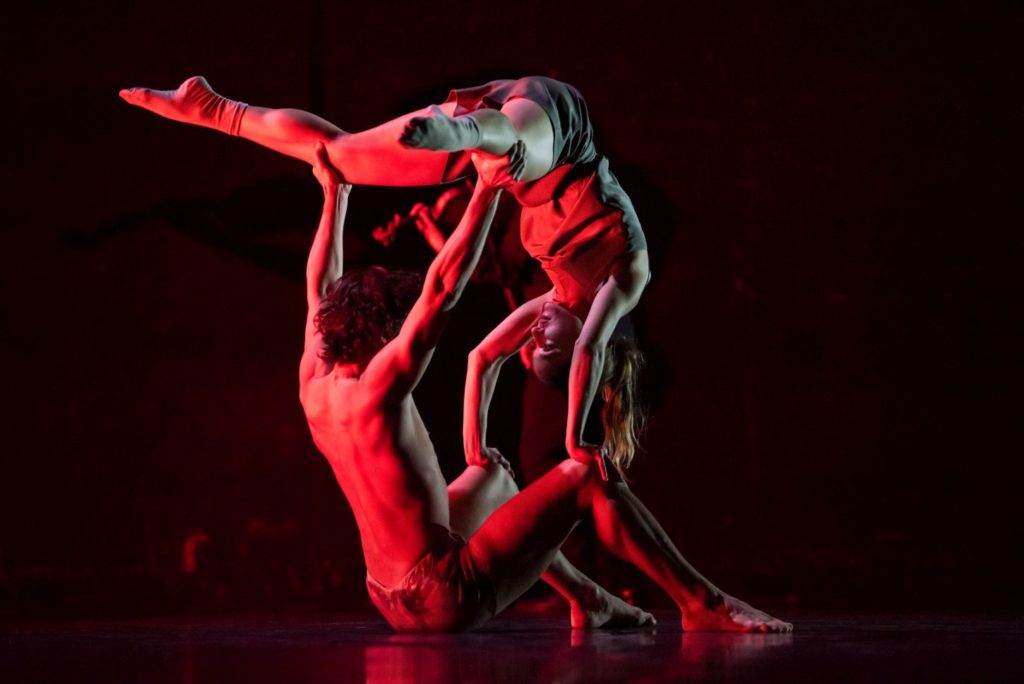 Four years ago, Marijn Rademaker told me about his excitement to return to the stage after a long break resulting from injury. At that time, he was involved in umpteen other projects, yet had not given any indication that he wanted to try his hand at choreography or direction – but, as with any seed, talent can sprout in hiding.

This Saturday, Rademaker presented the first result of his new ambition: “Verklärte Nacht” (“Transfigured Night”), a contemporary ballet-film set to Arnold Schoenberg’s eponymous thirty-minute composition, created in collaboration with the Academy for Theatre and Digitality, Dortmund, and the filmmaker Mathieu Gremillet. It was danced by the Ballet Dortmund.

Schoenberg took inspiration from an 1896 poem by Richard Dehmel about a woman who confesses to her new lover that she is pregnant by another man. After some reflection, he accepts the unborn child as if it were his own. Anthony Tudor (among other choreographers) adapted the subject for the dance stage in 1942. His “Pillar of Fire”, an ensemble piece, showed how the guilt-ridden mother-to-be suffered in the chasm between a stiflingly judgmental environment and the licentiousness the younger generation indulged in. Rademaker, by contrast, focused solely on the three protagonists – the woman (Alisa Uzunova), her new lover (Simon Jones), and the father of her child (Lúcio Kalbusch). We don’t know whether this woman was pregnant from the beginning of the piece – the portrayed love affair might have been a flashback – or whether her anxiety arose from other circumstances than secret child-bearing. 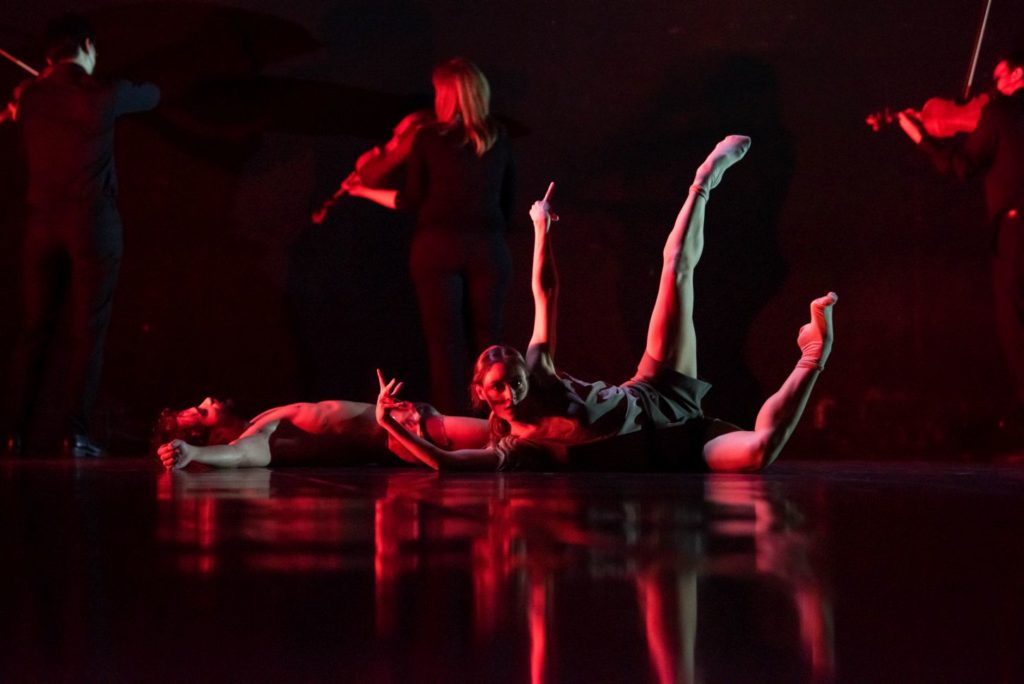 In any case, Uzunova’s woman is initially hesitant, putting one foot in front of the other as though she’d prefer to run off and away. Her shoulders are pulled up to her ears; her gaze is frightened and helpless, and her limbs are strangely contorted. Jones stands at a distance, emotionally aloof, but with arms open in a messiah-like gesture of welcome. Like a drowning person reaching a lifeboat, Uzunova escapes to him, reassured and supported by his presence – but not for long. This woman might be frightened, but she is a warrior by nature. But what is she fighting against – or for? As she stretches her arms towards the sky above, what does she want to wrest from the universe?

Though initially intimate, Uzunova and Jones’s relationship soon grows frenzied and rough as red light diffuses over their bodies. Suddenly, Uzunova snaps from one time or place to another; she is now in the midst of an intense duet with another man (Kalbusch) in sexy latex shorts (costumes by the Stuttgart-based costume designer Thomas Lempertz). Their back-and-forth quickly evolves from stiffness to aggressive sexuality. The musicians of Dortmund’s Philharmonic Orchestra, who have been standing or sitting scattered across the stage throughout the entire piece, face away from the scene. Jones, his face stoically unmoved, does the same. 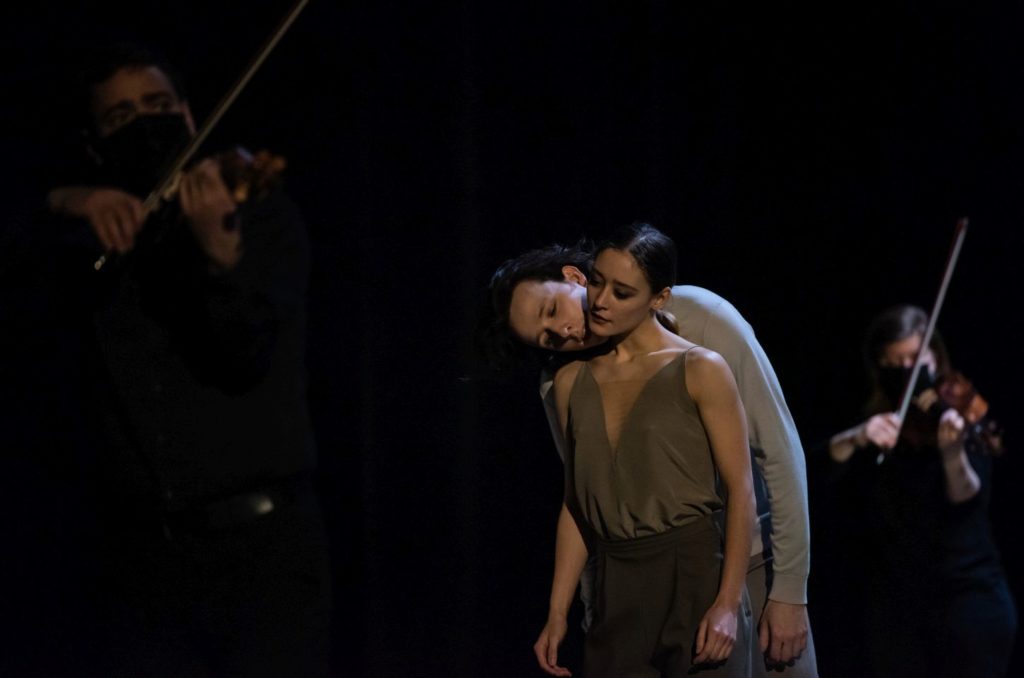 When the woman finally returns to him, Jones falls flat on his back as if struck by lightning and struggles fiercely as he attempts to deal with the situation. Uzunova stands motionless as he realigns his bones and joints in an attempt to establish a new viewpoint. When he finally resolves to take Uzunova back, his eyes shine with warmth for the first time. Still, she is restless, like a young horse eager to break free from its reins. He gently imposes his pace onto her until her energy peters out. Though it was she who initially sought stability in him, he now leans playfully towards her. Their bond isn’t even strained by the re-appearance of Kalbusch – this time in everyday wear. In Tudor’s version, the woman was cruelly ditched by her former lover; in Rademaker’s piece, all three unite briefly in a peaceful tableaux before Kalbusch strikes out on his own.

Rademaker invented fresh, unorthodox movements imbued with striking expressiveness. The dancers repeatedly roll onto their backs with legs stretched upwards, awkwardly twisted in a shoulder stand or mutually intertwined. A backward bridge held by head and feet with arms stretched out yearningly behind suggest the desire to reconcile. Mutual recognition isn’t merely an act of looking straight into each other’s eyes, but is preceded by balance-acrobatics followed by a glance upside down.
Sadly, “Verklärte Nacht” was only available online for about 24 hours. It’s also regrettable that – unlike any other company I’ve reported about so far – the head of Dortmund Ballet’s press office refused to provide more than three photos free of charge. An incomprehensible marketing strategy in times when theaters struggle against fading from public perception.