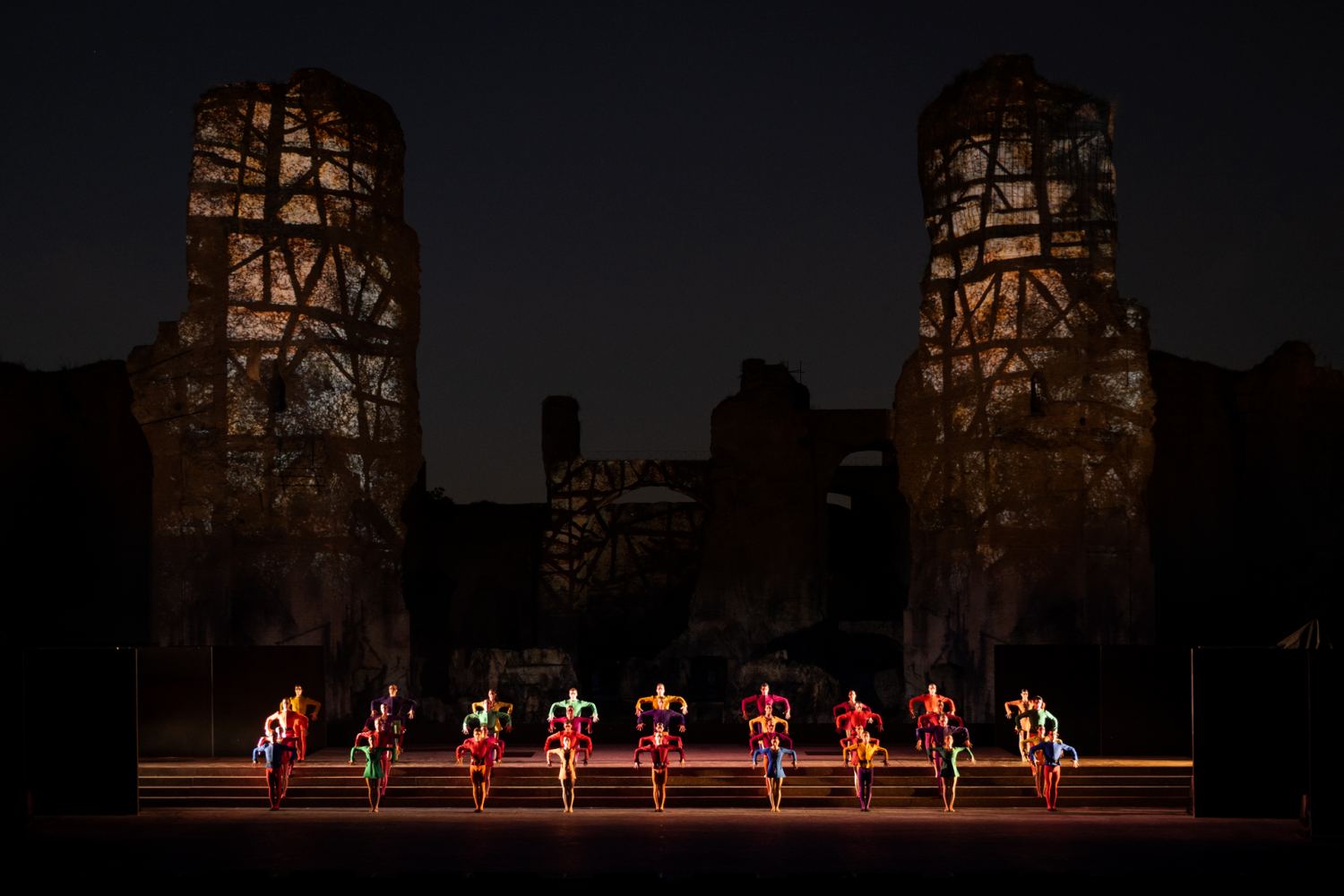 The Teatro dell’Opera di Roma is in the enviable position of being able to relocate their performances to impressive antique open-air venues during the warm months. While the 2021 summer performances took place at the Circus Maximus, this year the company returned to its traditional stage at the Baths of Caracalla. I watched the final performance of Roland Petit’s “Notre-Dame de Paris”, based on Victor Hugo’s 1831 novel “The Hunchback of Notre Dame”.

The ballet tells the tale of the disabled Quasimodo (bell-ringer of Notre Dame in late medieval Paris), his master Claude Frollo (Notre Dame’s archdeacon), Esmeralda (a beautiful Romani woman), and Captain Phoebus (Esmeralda’s lover). In a departure from Tikhomirov & Burmeister’s take on the story for the Stanislavsky Ballet (their “La Esmeralda”), Petit stripped down the original plot to its nuts and bolts. Frollo, lusting obsessively after Esmeralda, orders Quasimodo to abduct her. 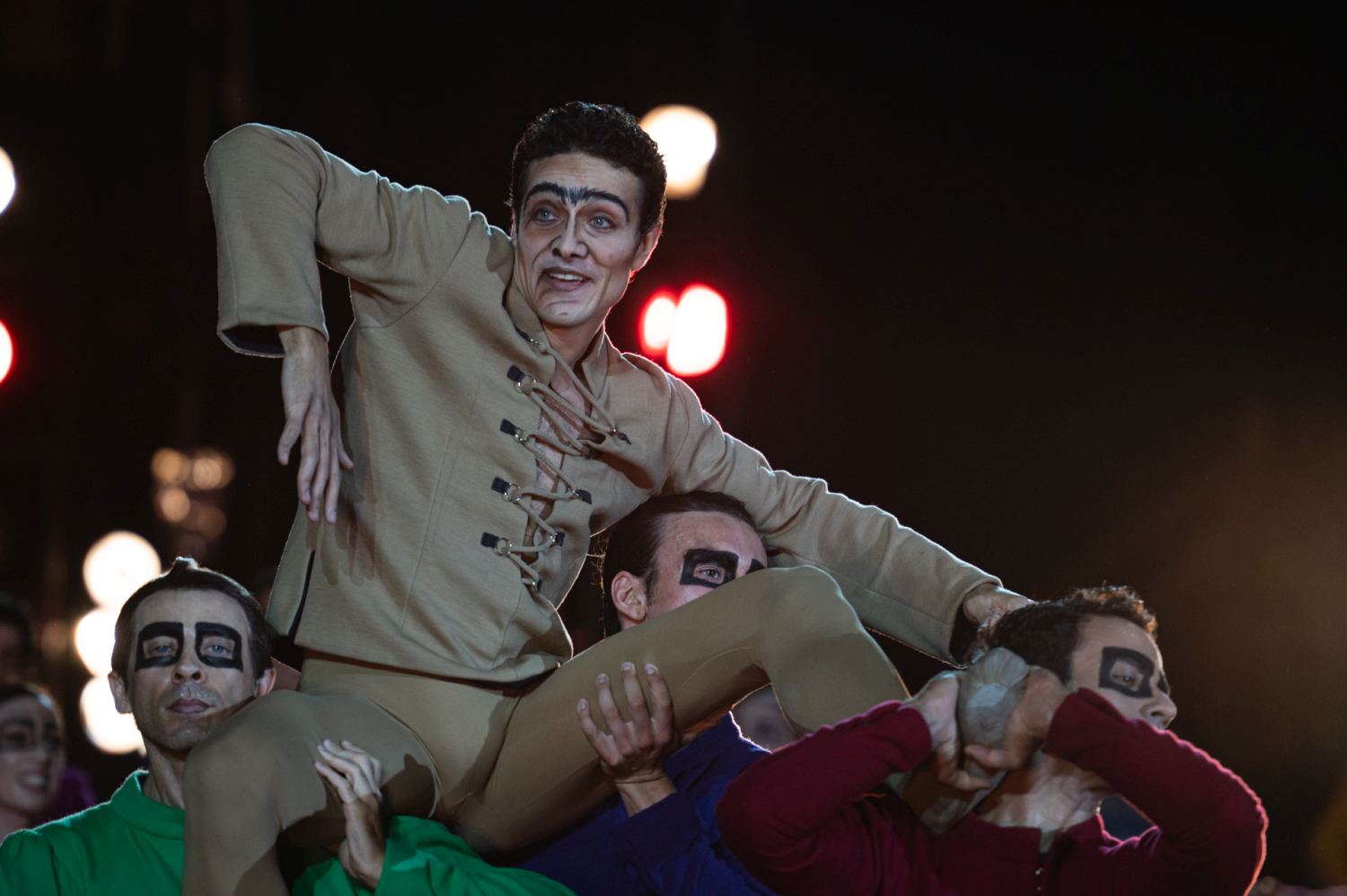 She is saved by Phoebus and promptly falls in love with him. The jealous Frollo stabs Phoebus, lays the blame on Esmeralda, and ensures that she is sentenced to be hanged. Quasimodo, himself in love with Esmeralda, tries in vain to rescue her. Realizing Frollo’s malicious duplicity, Quasimodo strangles Frollo to death.

“Notre-Dame de Paris” debuted at the Paris Opera Ballet in 1967. Last September, the Teatro dell’Opera di Roma added the ballet to its repertoire and premiered it at the Teatro Constanzi (Rome Opera House). 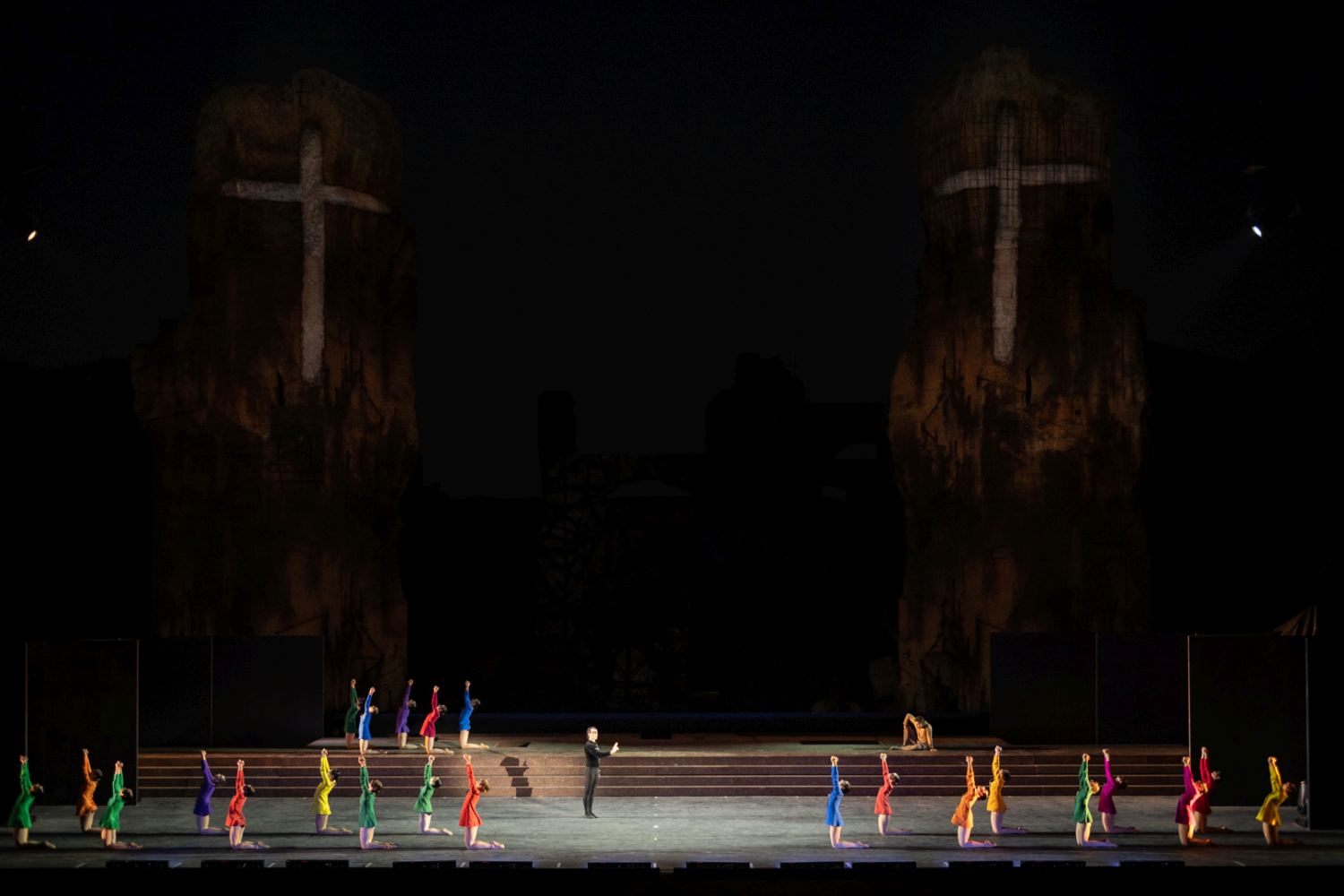 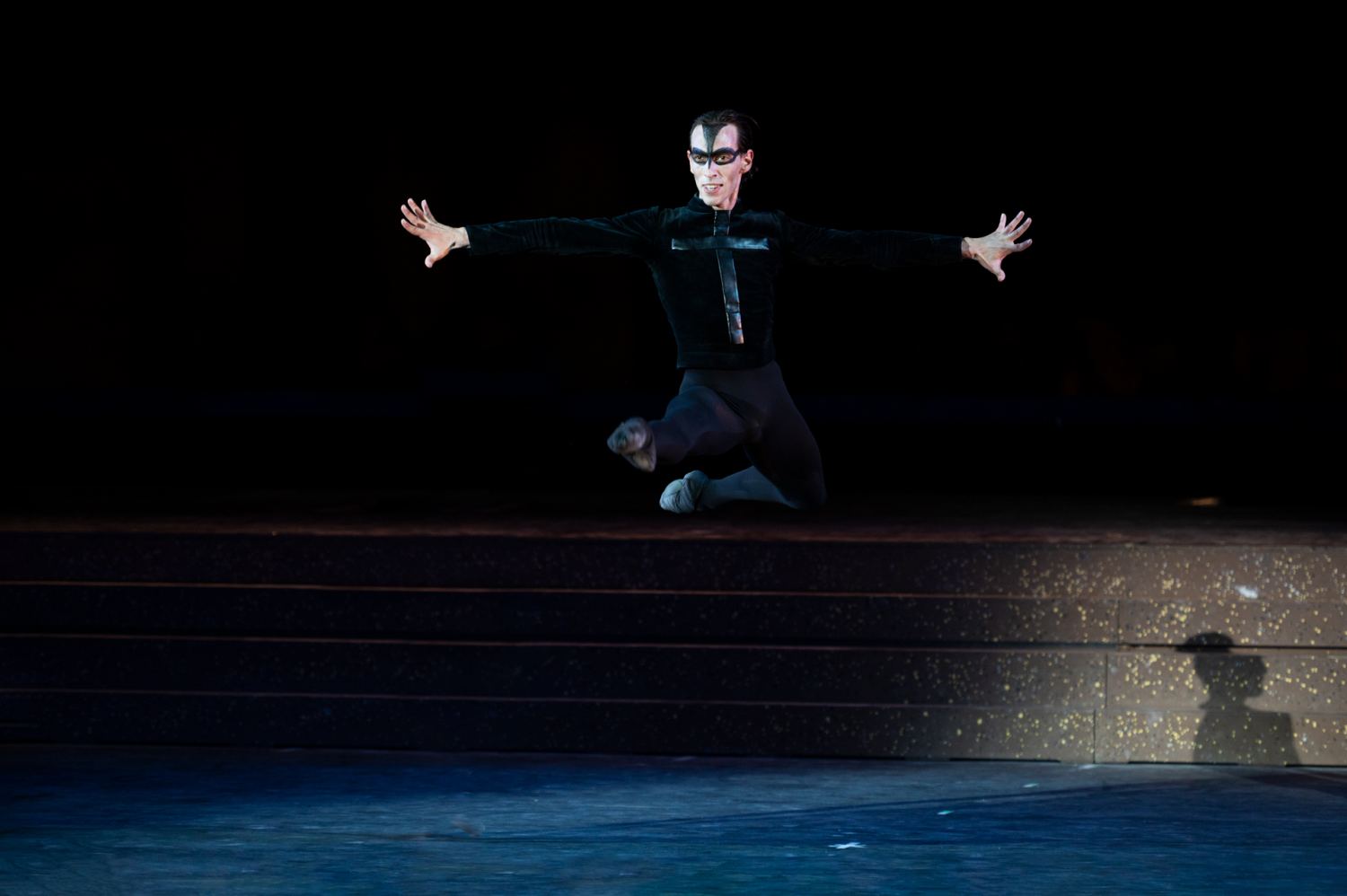 Out of René Allio’s entire set design only the huge church bells, a few tavern tables, and a gallows were taken to the Caracalla. The setting was defined by large crosses and belfry ladders projected on the tall ruins on either side of the stage. Yves Saint-Laurent’s daringly colorful costumes bridged medieval robing and modern fashion. As there was no front curtain, the lighting was switched on and off to indicate scene changes or the end of the break. The air still carried the day’s heat; not a single cloud was on the horizon, and clittering cicadas chimed amongst the cinematic atmosphere of Maurice Jarre’s composition – a perfect locale! 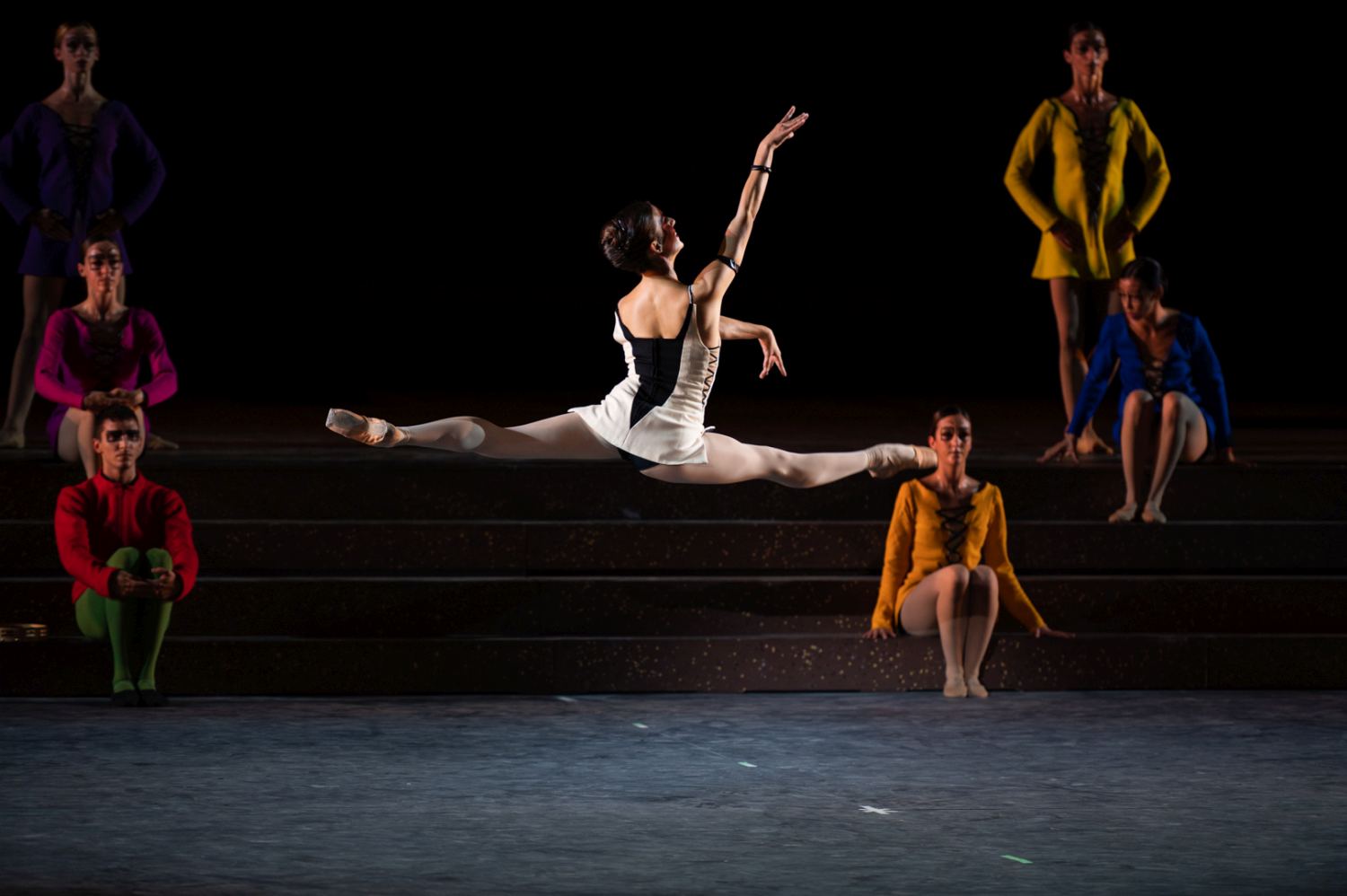 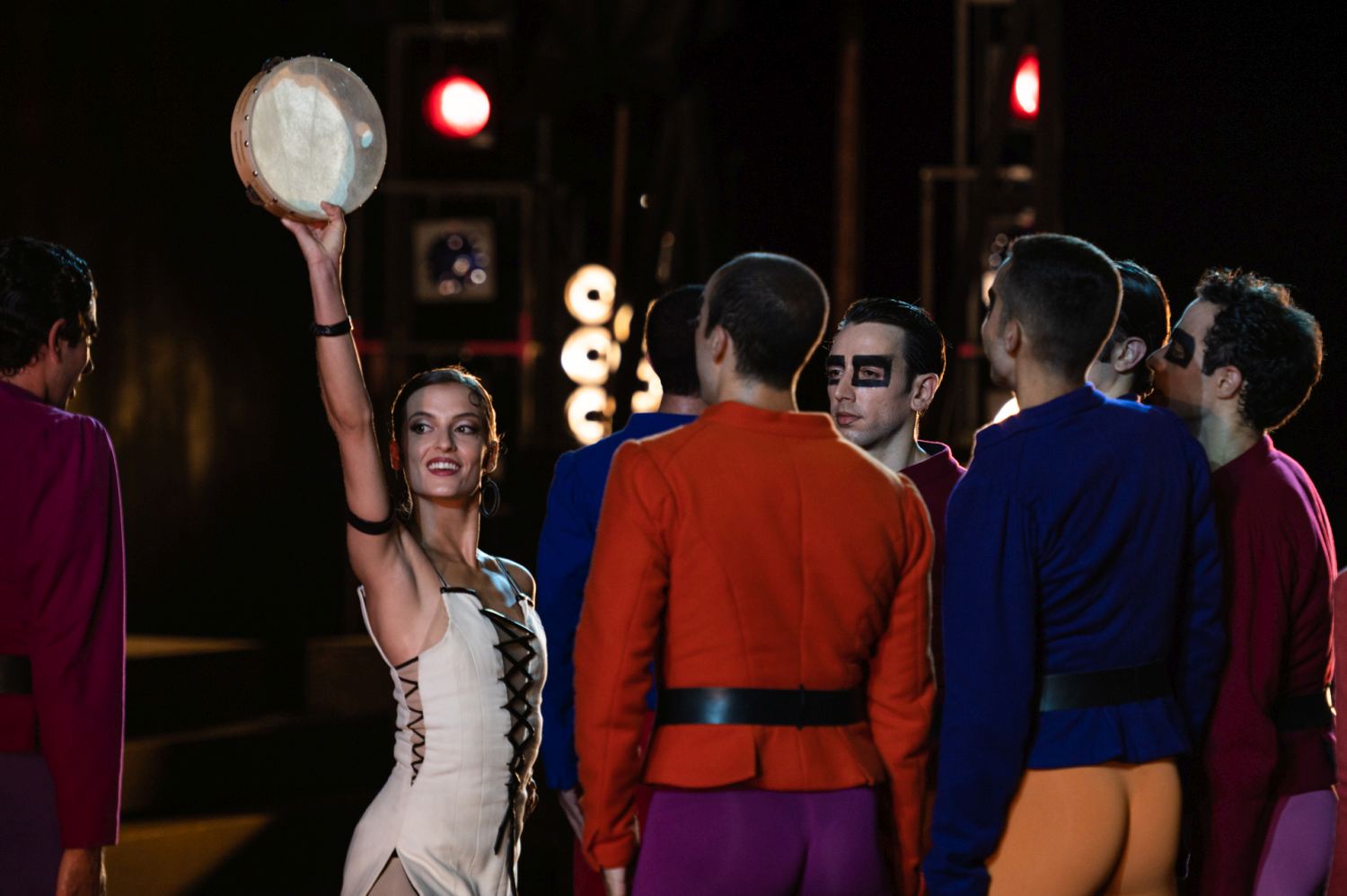 Unfortunately, the ballet was not perfect. The first few minutes of the first scene’s Feast of Fools made it clear that this production was ill-chosen for this stage. It may have worked well in a medium-sized indoor stage supported by a complete décor, but surrounded by the monumental remnants of the Roman empire, it looked weak and at times ridiculous. The group scenes designed by Petit proved far too simple and repetitive; I was reminded of wooden jumping-jacks marching mechanically in sync. As I watched the dancers form simple geometries and static patterns, I wondered whether Petit had 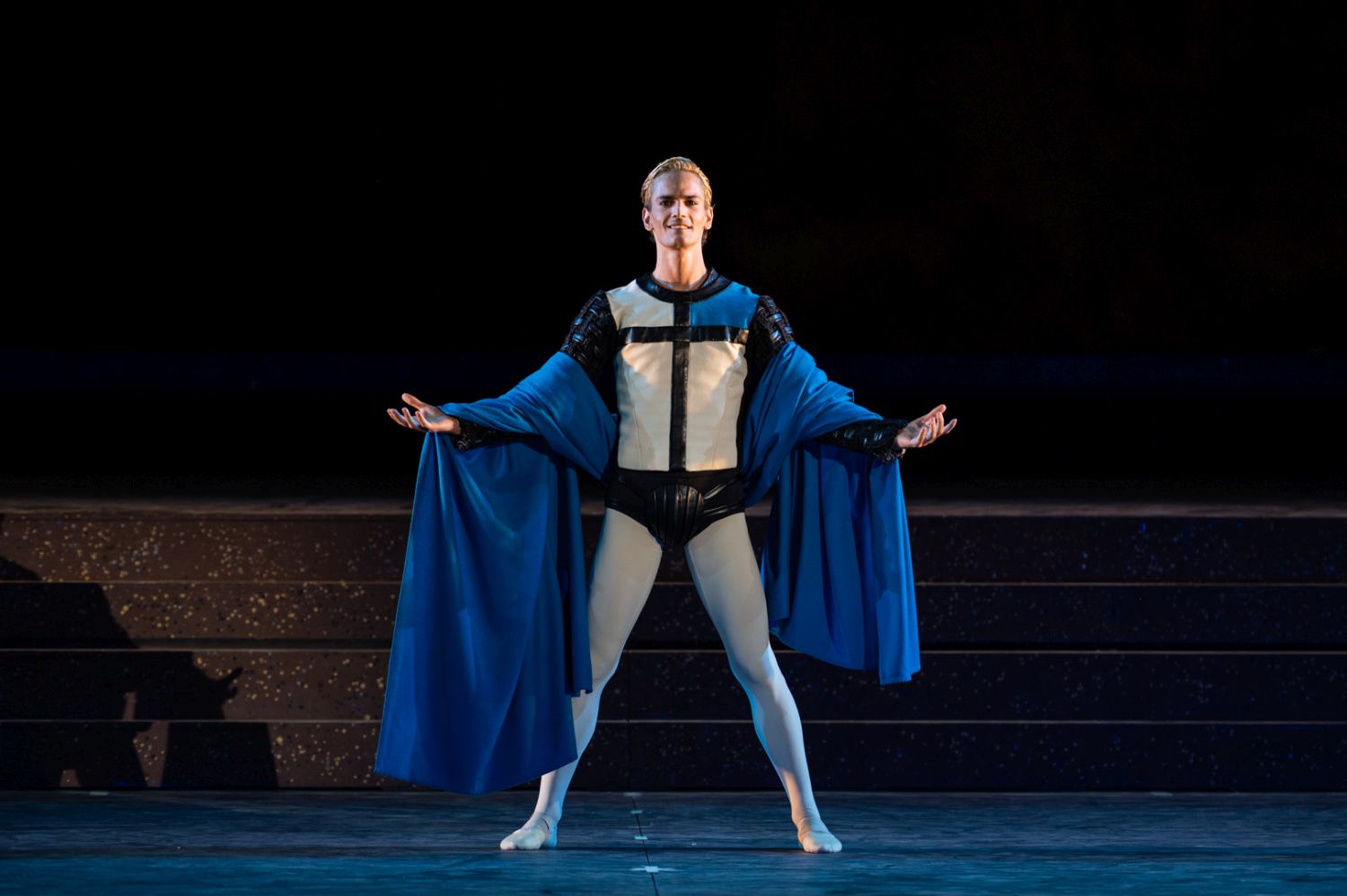 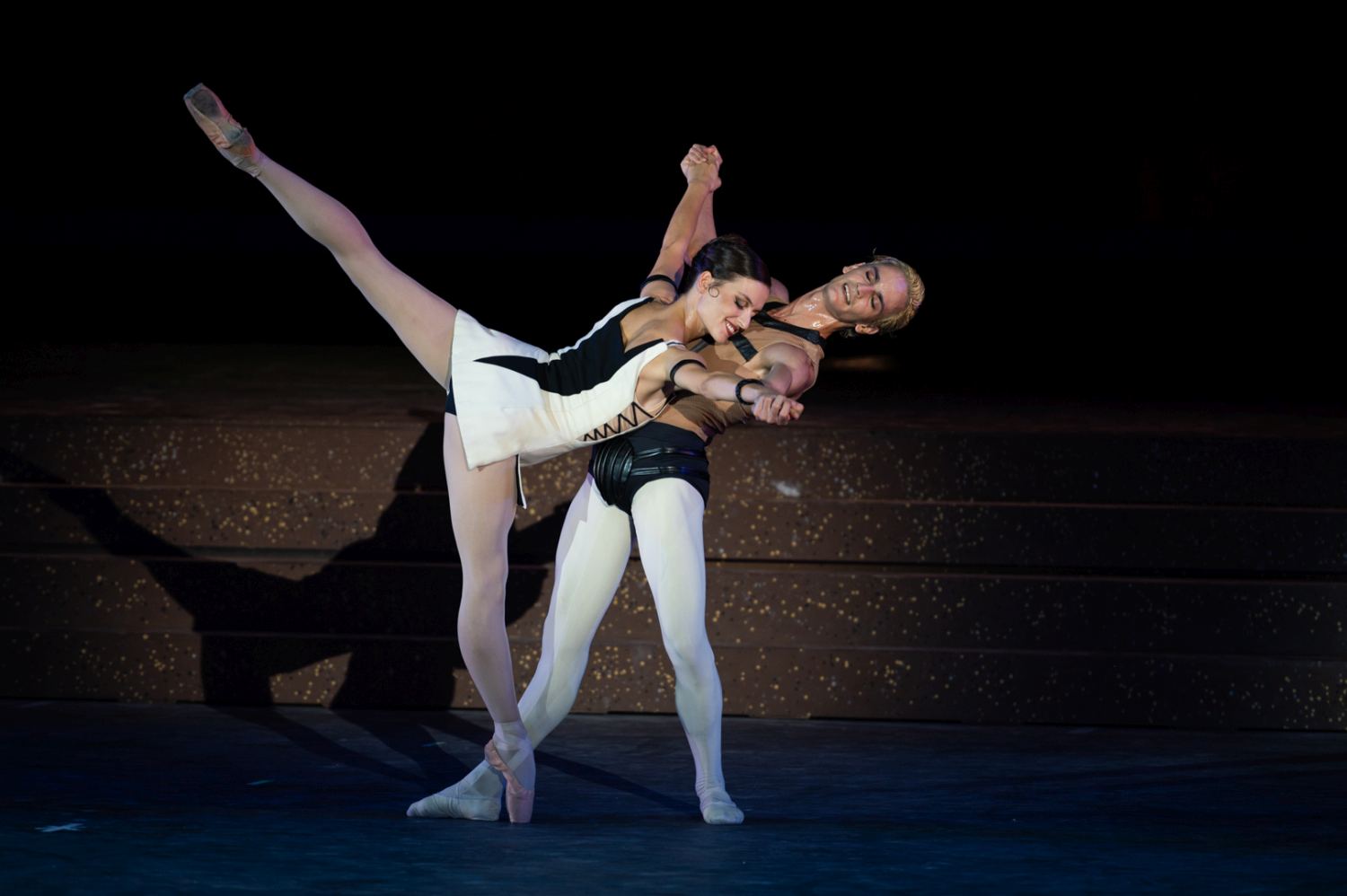 attempted to translate cubism into dance – and found that what might have been an interesting experiment was unsuitable for a two-act story ballet whose bare-bones narrative already dragged.

The solos, pas de deux, and group dances invented by Petit for the main characters varied in quality. A stooped posture, elevated right shoulder, and dangling left arm defined Quasimodo’s physicality (Michele Satriano). Esmeralda’s tender attention smoothened the clumsiness of his movements. Towards the end, Quasimodo threw her limp corpse over his shoulder again and again, as if attempting to whip himself. 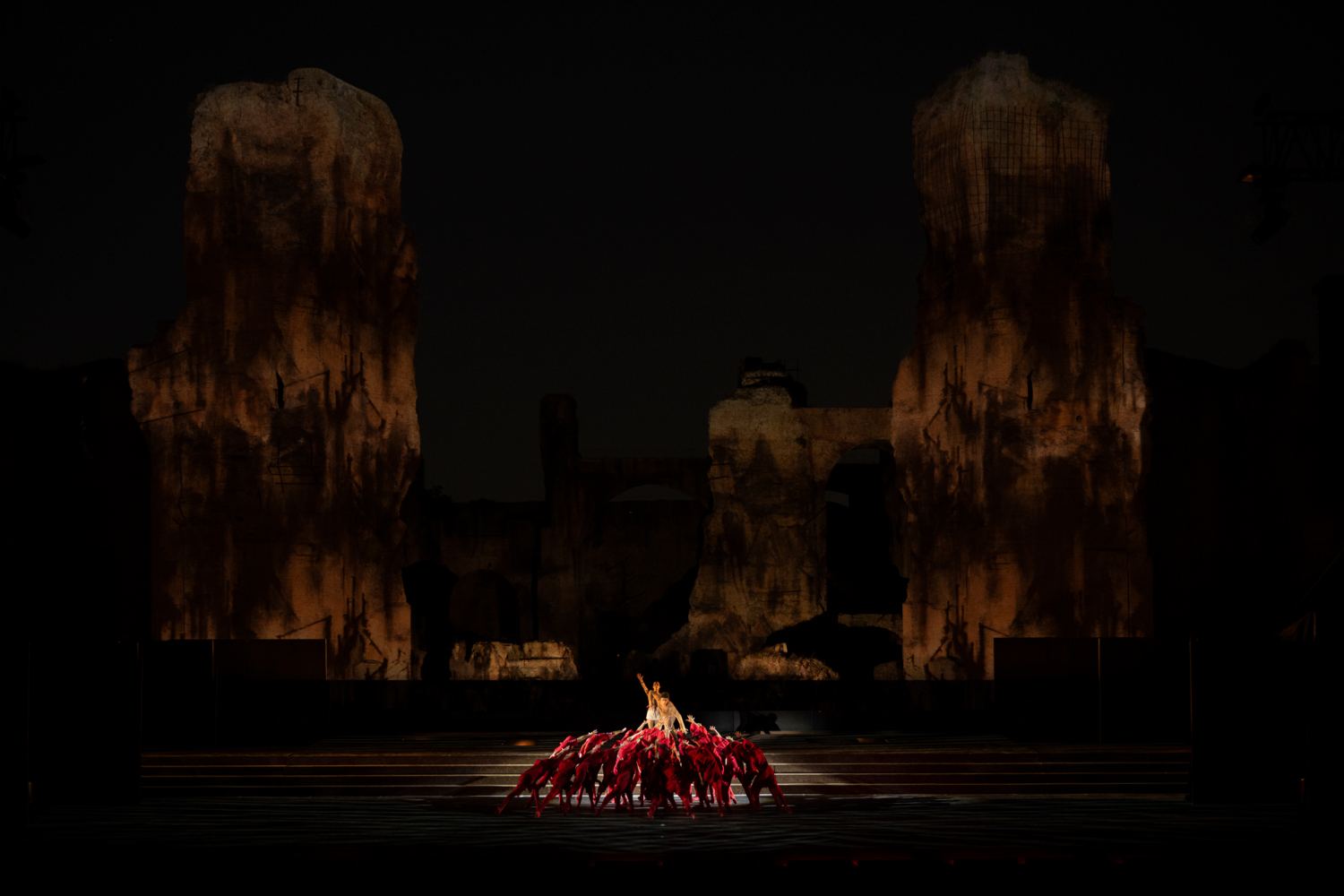 Esmeralda (Susanna Salvi, who was promoted to étoile during the September run of “Notre-Dame de Paris”) evoked the spirit of Don Quixote’s Kitri but it was as if that spirit had been reduced to a flamelet. I remember Salvi’s dashing interpretation of the title role in Jiří Bubeníček’s “Carmen” – she can dance and she can act, but Petit’s choreography did very little to showcase her talents. 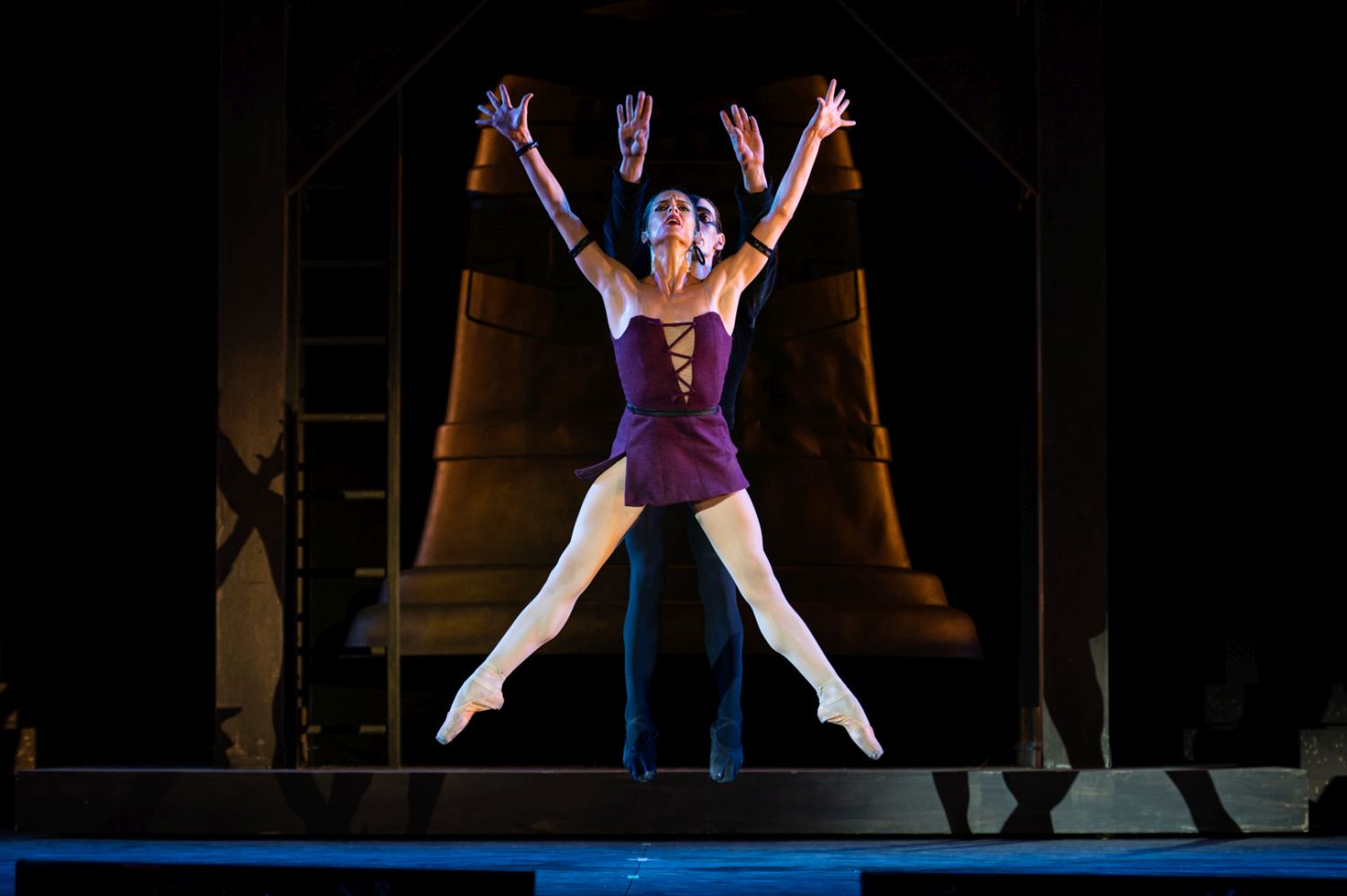 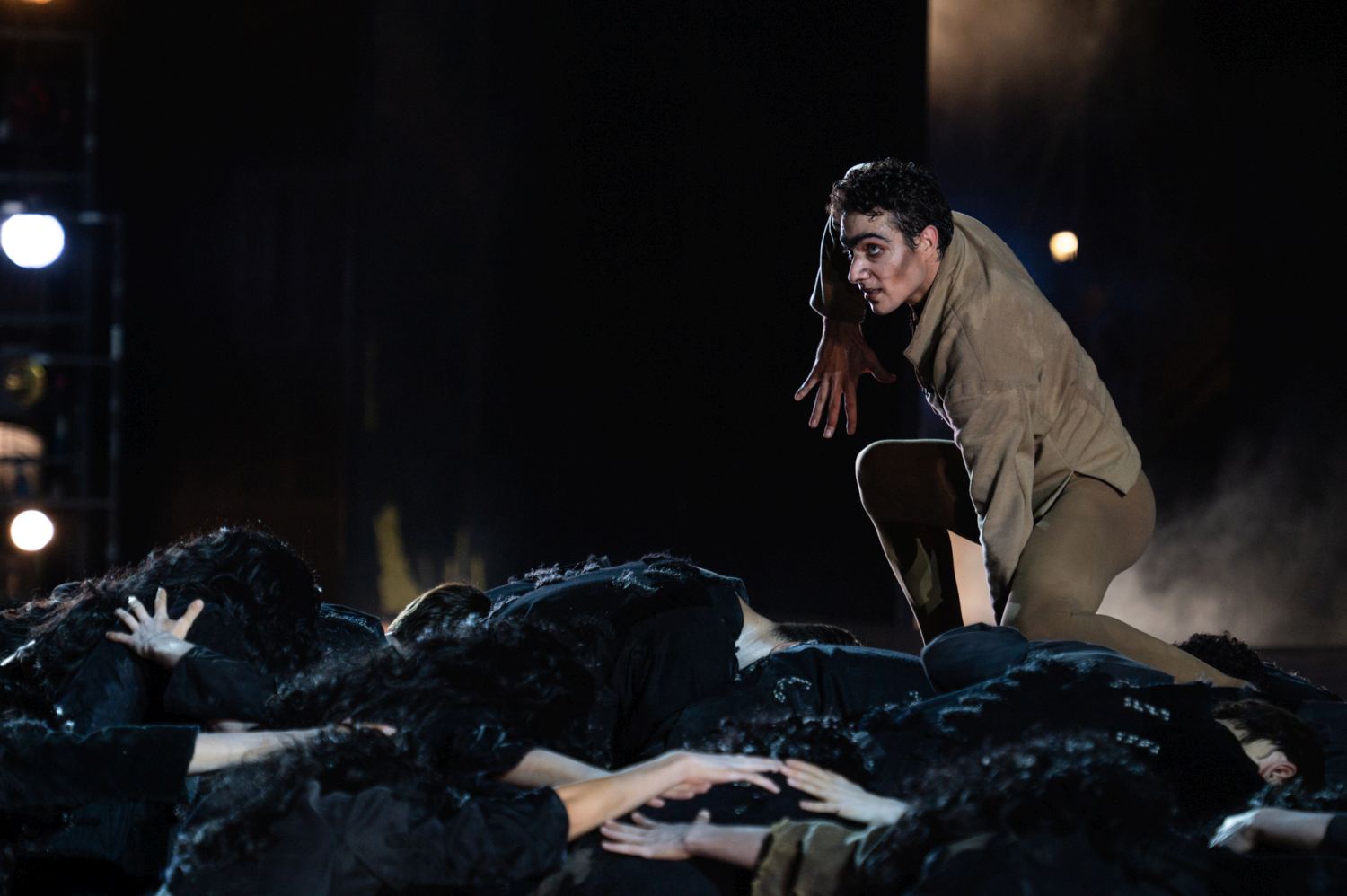 A back-stabber in the truest sense of the word, Frollo (Claudio Cocino) worked diligently to hide his sinister intentions. His arms and legs cut precisely through the air, as if themselves demonstrations of rigid righteousness. His power to manipulate made him a commanding figure – and a disgustingly rotten cleric!
As Phoebus, Simone Agró was left to depict a shallow stereotype of a handsome savior.

The stage of the Caracalla requires a strong ballet that can compete with the power of the venue. Perhaps a full-blown “Spartacus” would be ideal. 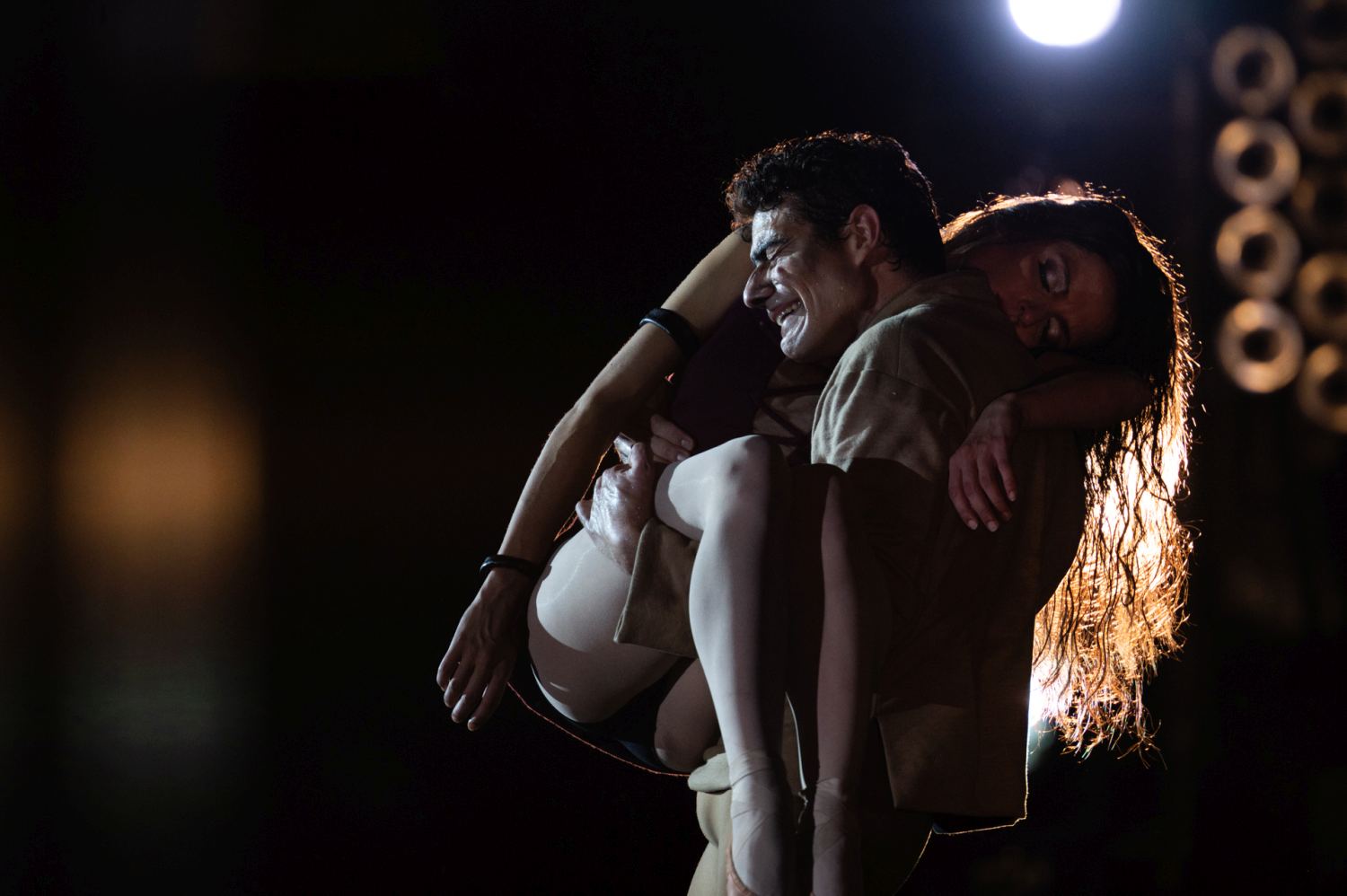