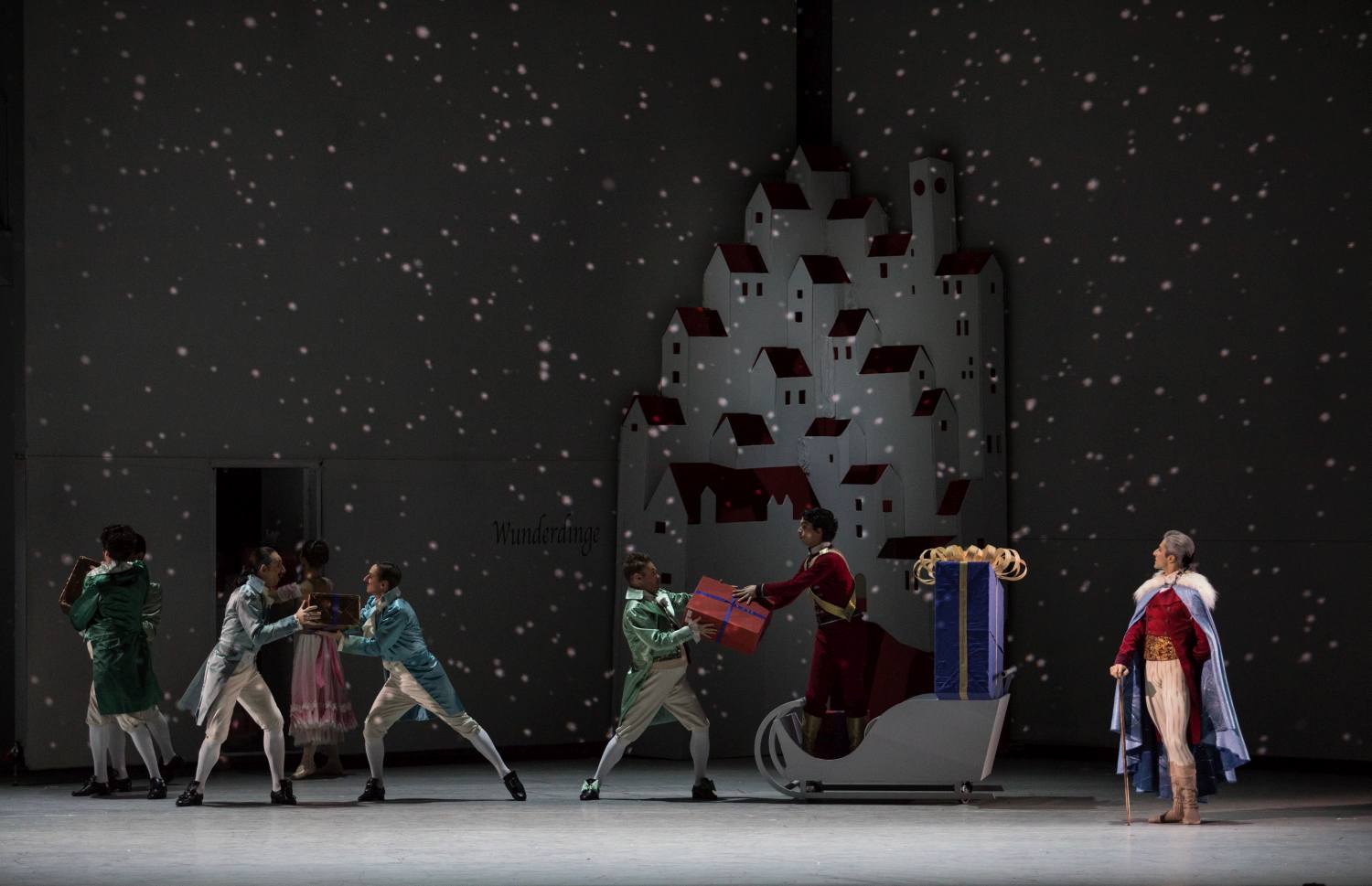 This winter, the Stanislavsky Ballet replaced Vasily Vainonen’s 1995 “Nutcracker” with Yuri Possokhov’s – not a brand-new rendering, but an adaption of the “Nutcracker” that Possokhov created for the Atlanta Ballet in 2018 (new designs included). Since its premiere in Moscow at the end of November, tickets have been in high demand. Given Possokhov’s good work on the Bolshoi Ballet’s “Nureyev” and an “Anna Karenina” for the Joffrey Ballet & the Australian Ballet, I was curious what approach he’d take to this iconic ballet – and it was clear within seconds that he had given this Nutcracker a strong update.

Sergey Rylko’s dazzling videos hurl us through flurrying snow to a spinning astrological sign. From there, a golden ram gallops off towards and through a faceless white town, flying in low over rooftops, an ice-rink, and a carousel. We land at the workshop of Drosselmeyer (danced by Jonah Cook, a former principal of the Bavarian State Ballet and the Zurich Ballet), who is heaping presents onto a sleigh together with his nephew (Andrey Kirichenko). Drosselmeyer’s wall-sized astrological clocks, their faces rotating mysteriously, are presumably tools that control the ticking of the universe. 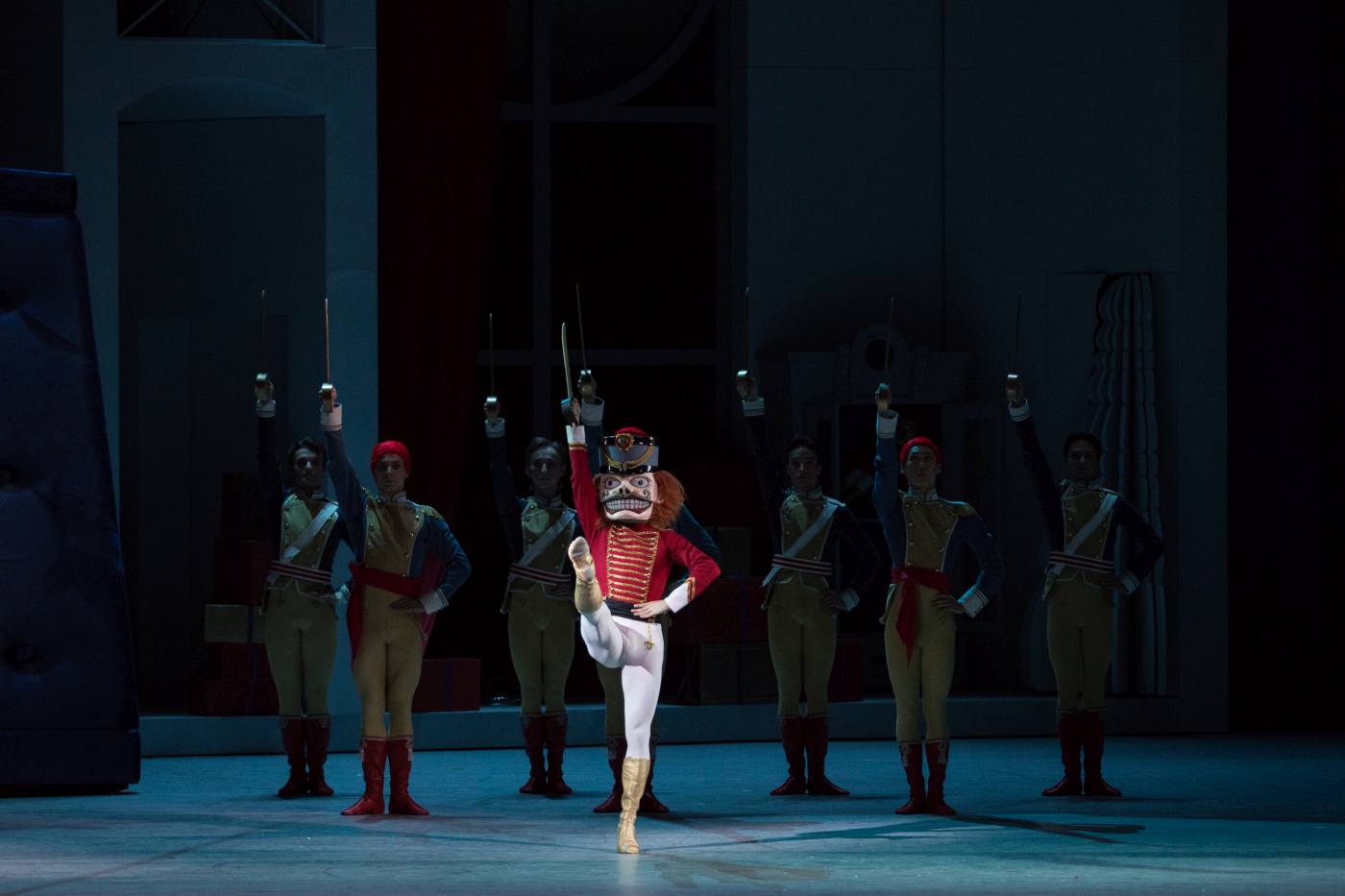 As the side wall of the workshop folds out like the page of a book (set design by Polina Bakhtina), we arrive in front of the Stahlbaums’ home along with a group of guests (among them many children) and the Santa Claus-like Drosselmeyer. The turning of another wall opens our view into the parlor – a room as white and unadorned as the blank pages of a book. We’re indeed inside a book that tells a modern version of E.T.A. Hoffmann’s “Nutcracker and the Mouse King”. Perhaps that’s why the young Marie Stahlbaum (Vitalina Alsufieva) and her mother (Kristina Golovacheva) wear glasses – they’re avid readers! 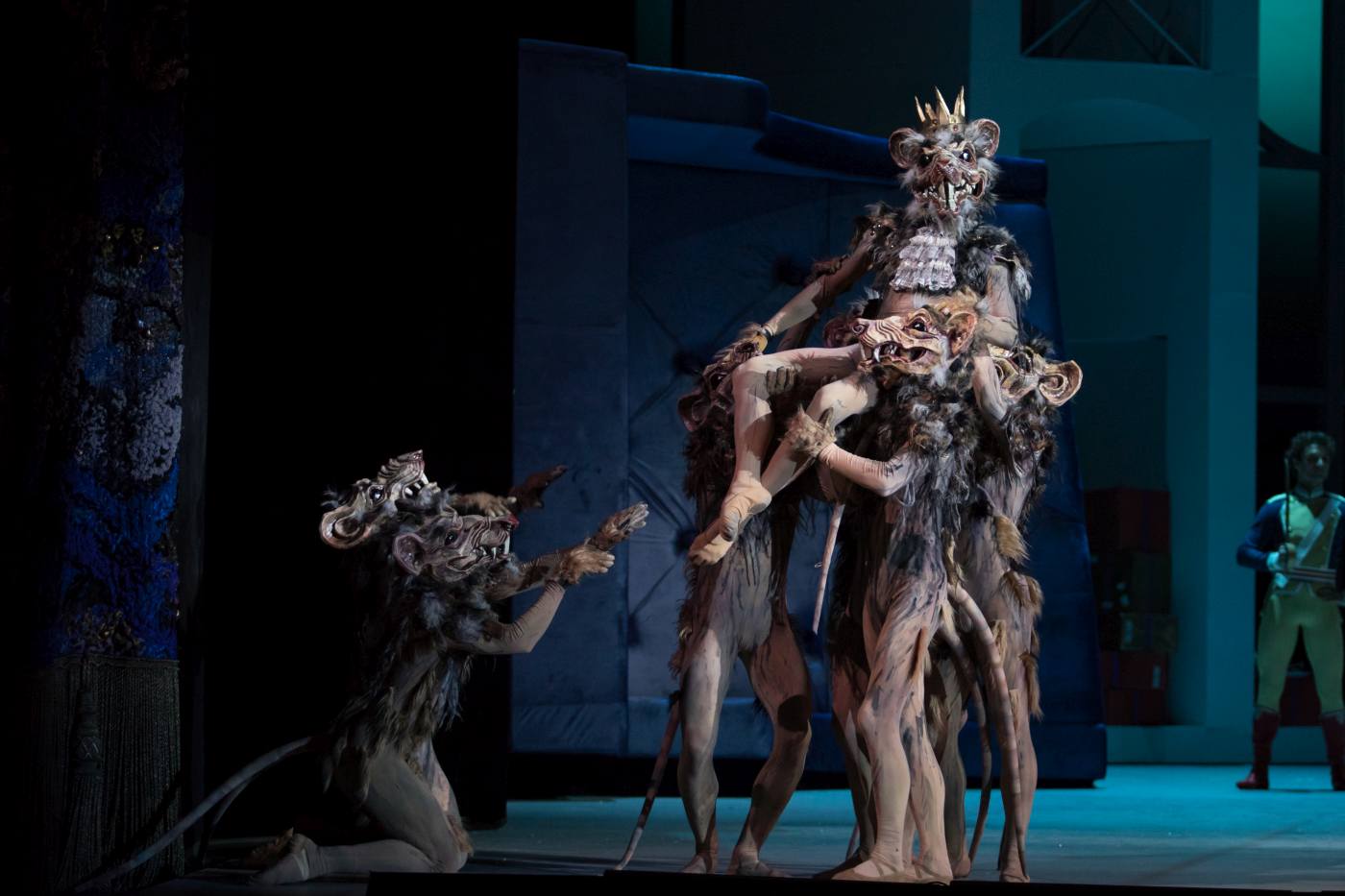 The next part is well-known: the nutcracker toy, which Drosselmeyer has presented to Marie, is torn apart by Marie’s little brother Fritz (Elisey Volkov) and repaired by Drosselmeyer. The tender romance that buds between Drosselmeyer’s nephew and Marie during his attempts to comfort her foreshadows the mature love of adulthood that fills Marie’s dream. 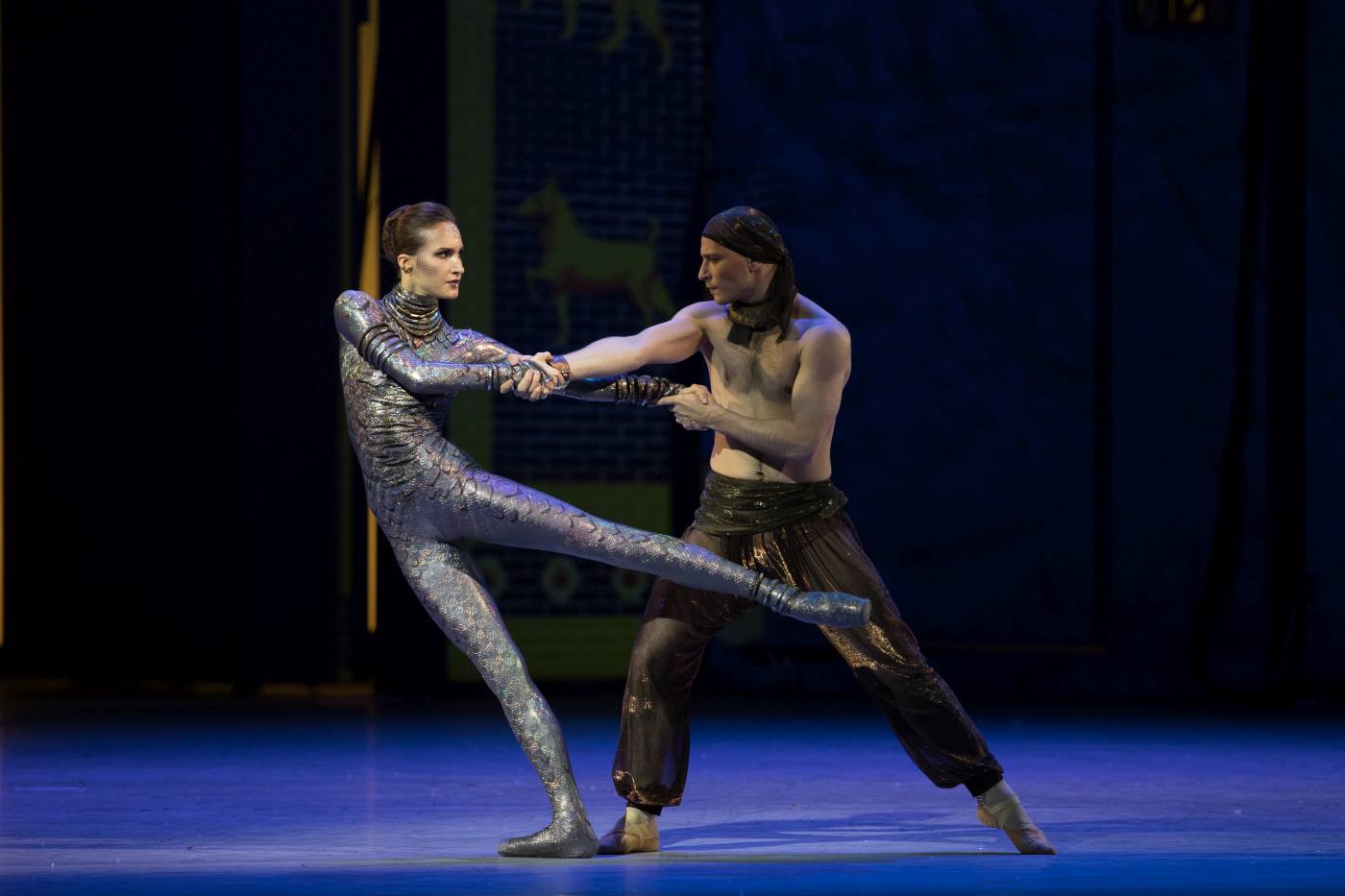 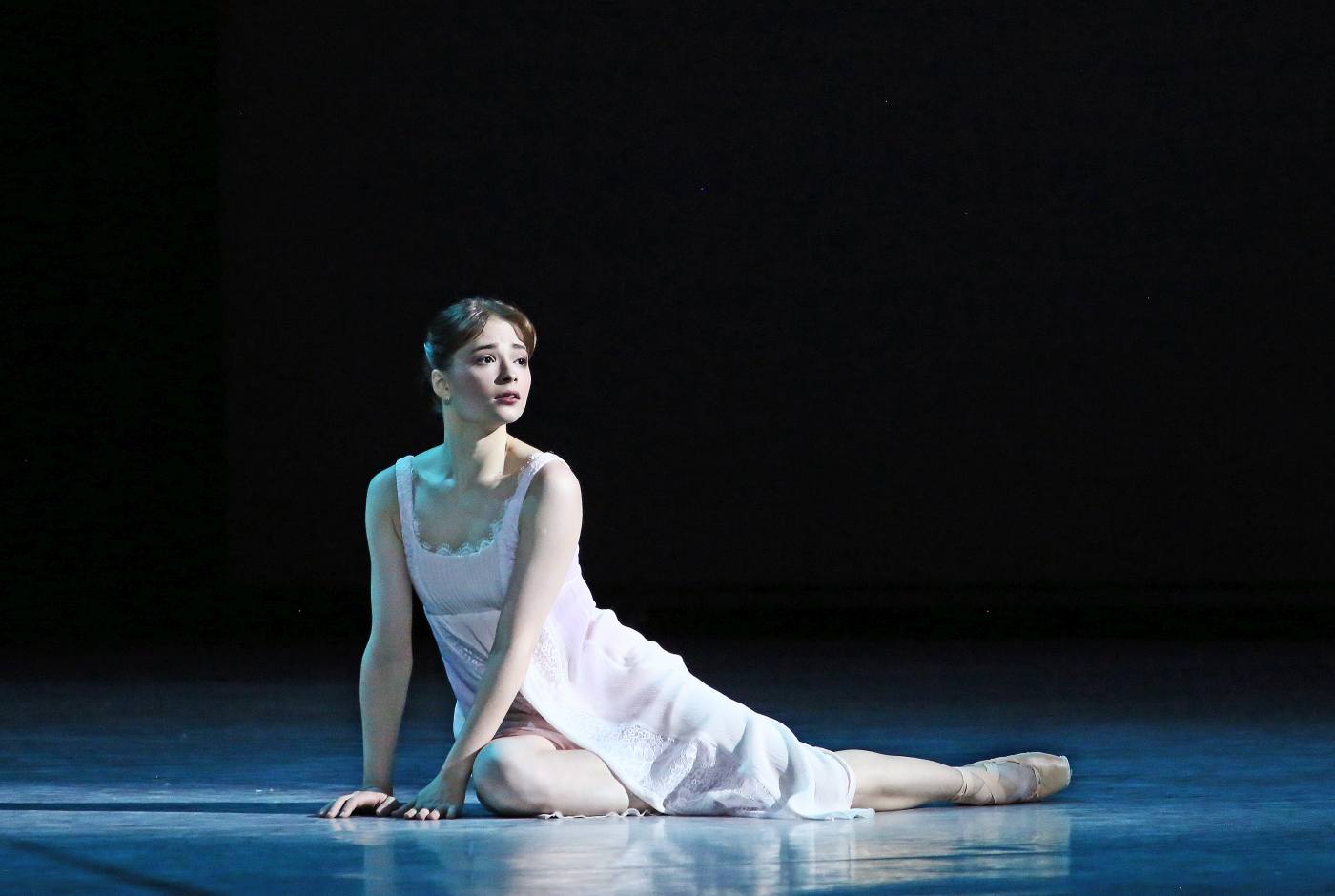 When Marie falls asleep, she dreams that she is a young woman (Zhanna Gubanova danced the adult Marie) which has been shrunk down to toy-size and is attacked by the terrible mouse king (Konstantin Nikitin). His army crawls around her feet, grabbing at her, decked out in terrifying mice outfits by Sandra Woodall. From the armchair, Marie observes the nutcracker and his officers moving out from the shelves of the living room’s glass cabinet to counter the mice, but – alas! – they must quickly retreat. When the mice have cleared out, a handsome prince (Innokenty Yuldashev) has replaced the nutcracker. A web of star rays appears to carry Marie and the prince to cosmic heights (in reality, a gray space whose corners are populated by white paper Christmas trees). Nevertheless, romance blossoms. 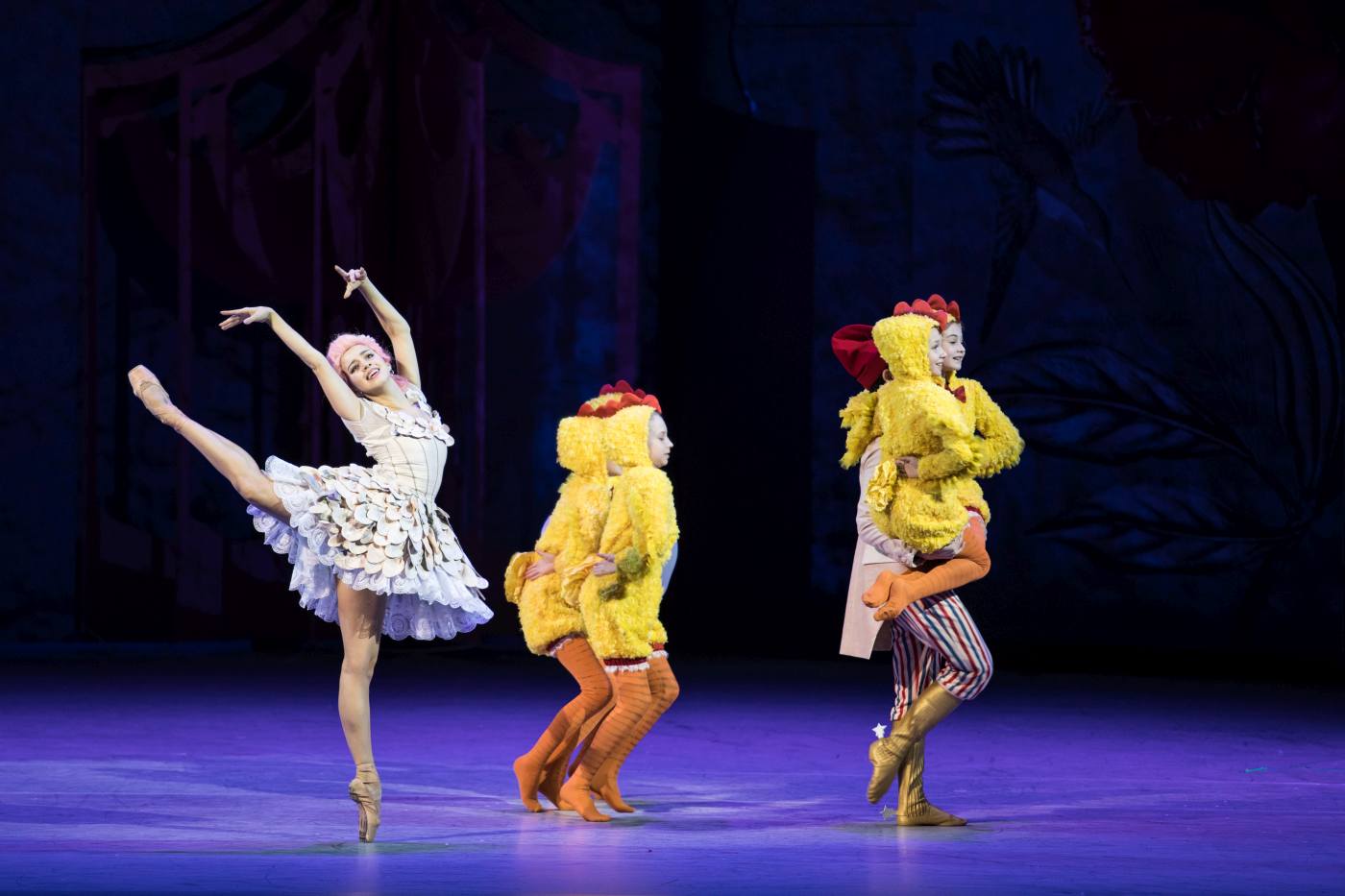 A breezy waltz of snowflakes sees the couple off to the next book page where a porthole looks out onto a summery expanse. Drosselmeyer, having taken the shortcut through the book, arrives first, assisting the prince in his showdown with the mouse king. This time the prince is victorious – but wait! Another mouse snatches the crown, coronating itself – leading us to believe that the mice plague will someday return. 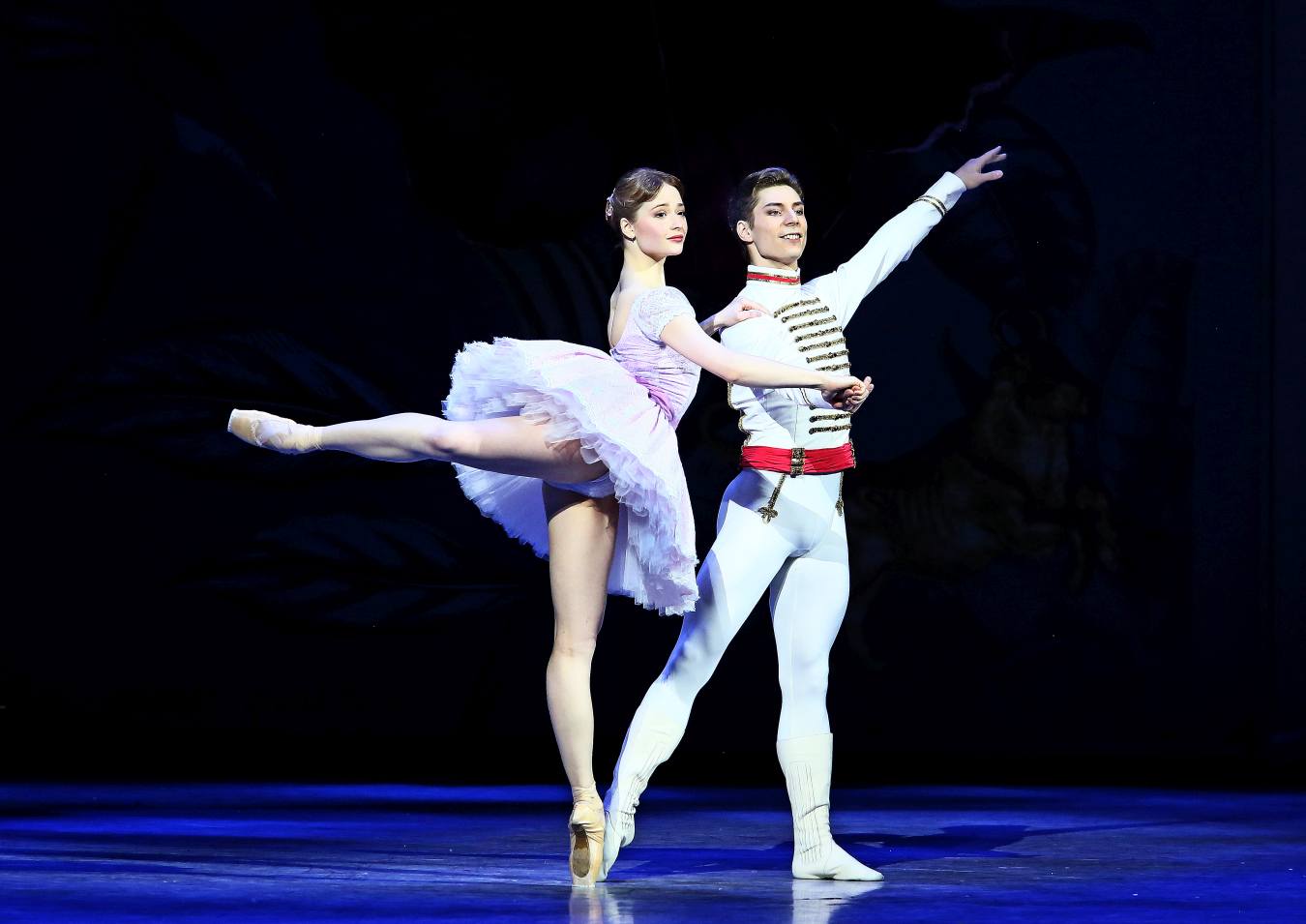 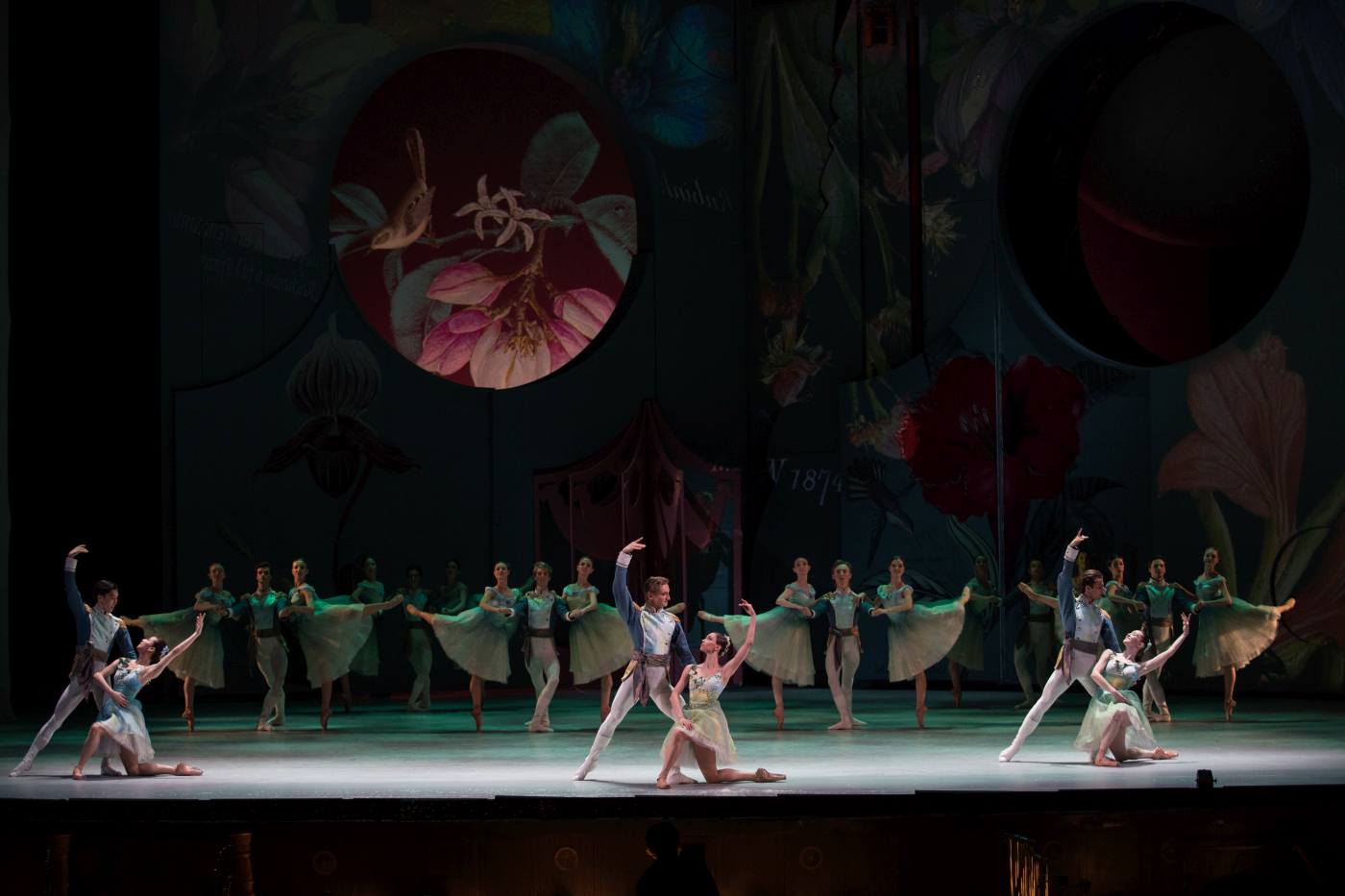 Given the visual fireworks up to this point, I expected a rousing grand pas de deux. Possokhov instead keeps the choreography tempered, sugared with just a pinch of sexual sensuality. A candy lilac petticoat-tutu and a pristine white uniform make Gubanova and Yuldashev appear a cutesy fifties Hollywood couple. Since both dancers debuted their role at the matinee, their performance was not yet perfect. 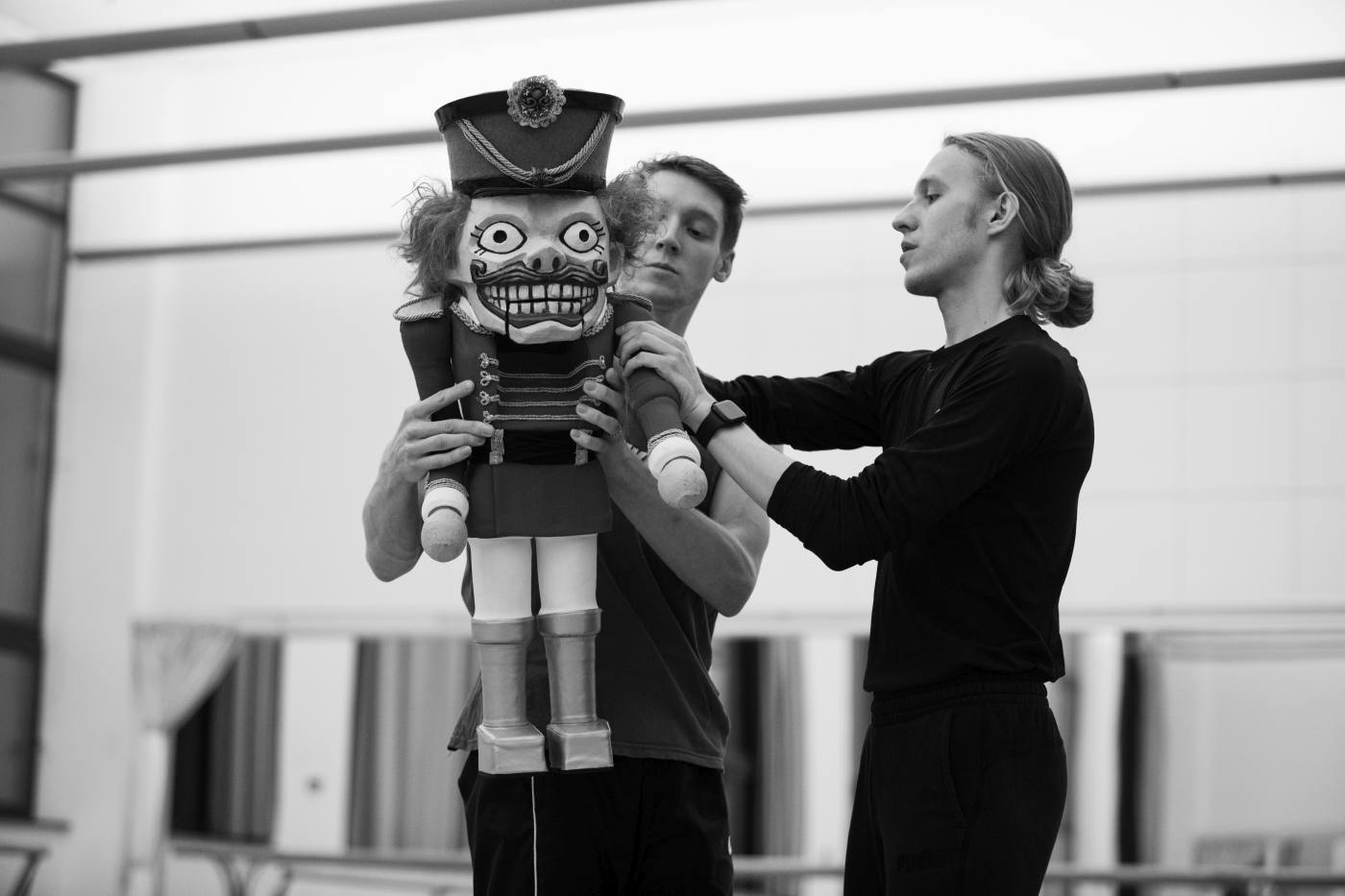 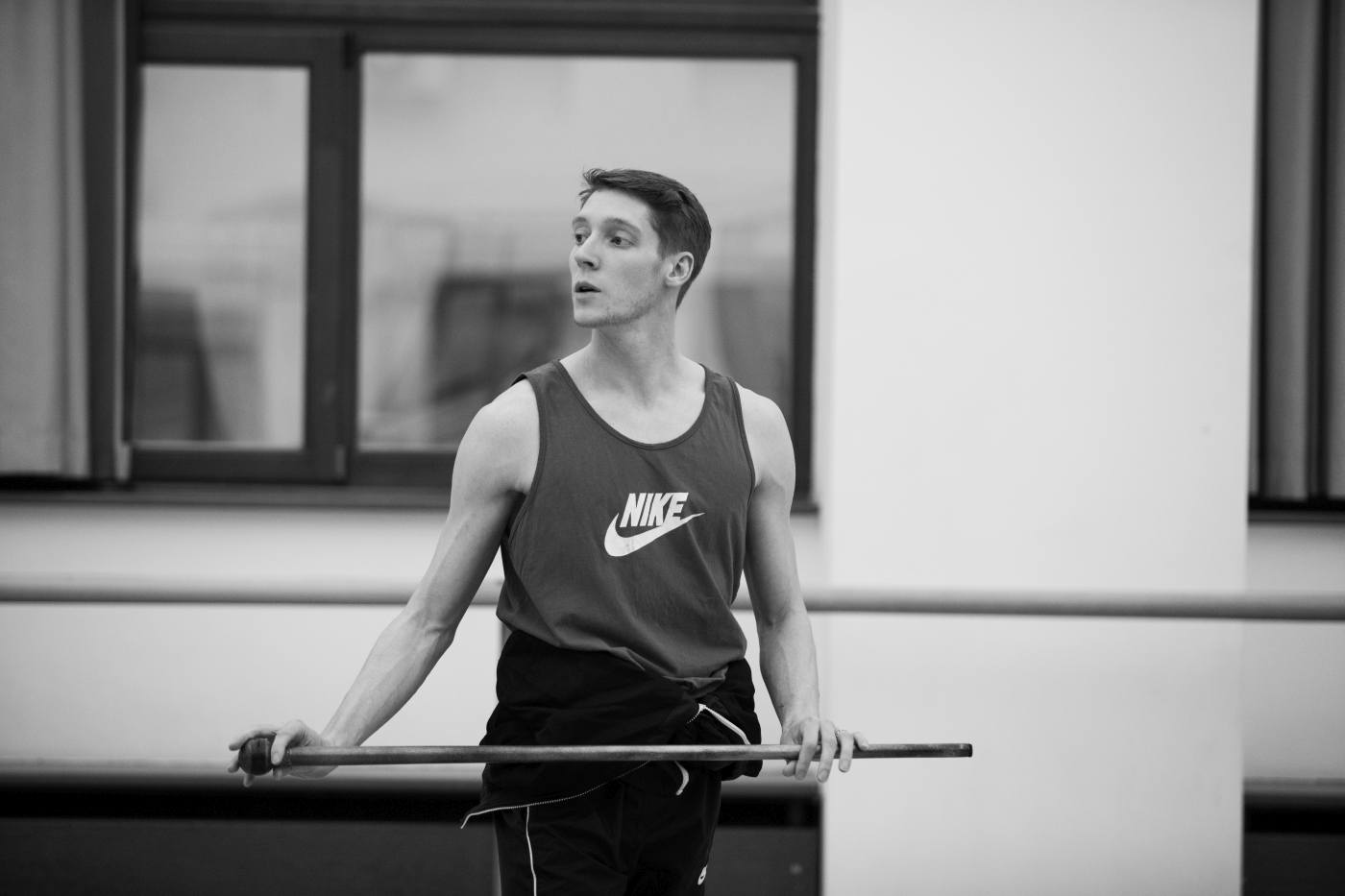 Despite waking from her dream in panic, Marie calms upon finding the nutcracker safely stored in the glass cabinet. In a final moment, Drosselmeyer is seen wearing a mouse mask, keeping the mystery alive.

Tchaikovsky’s score was given a colorful rendition by the orchestra of the Stanislavsky and Nemirovich-Danchenko Theatre playing under the baton of Roman Kaloshin. 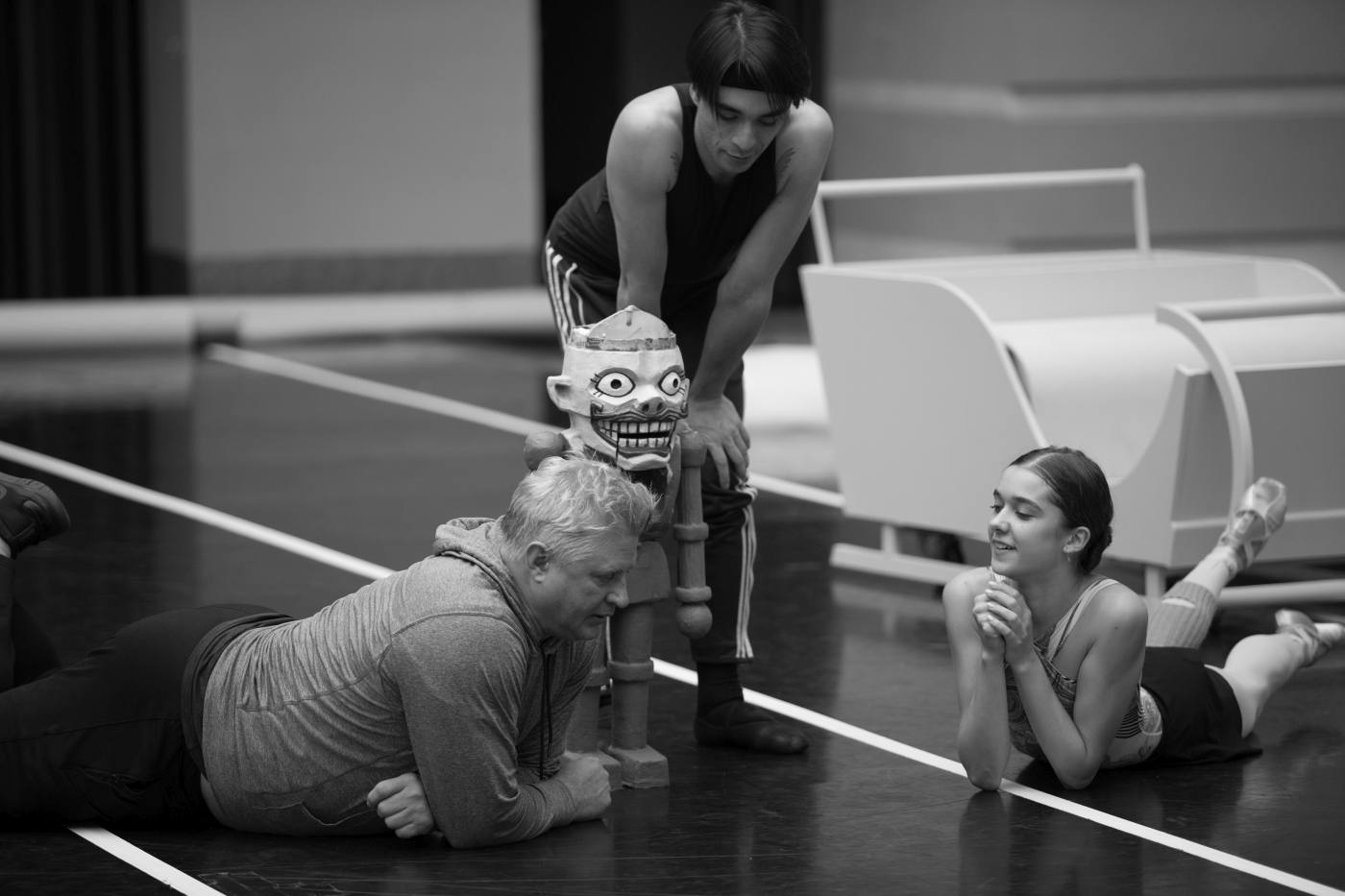